That's pretty much it for today, but what a day. Glorious sunshine out at Laverton, the larks were singing, and the kites flying. One of us was even seen with a tube of sun protection cream. 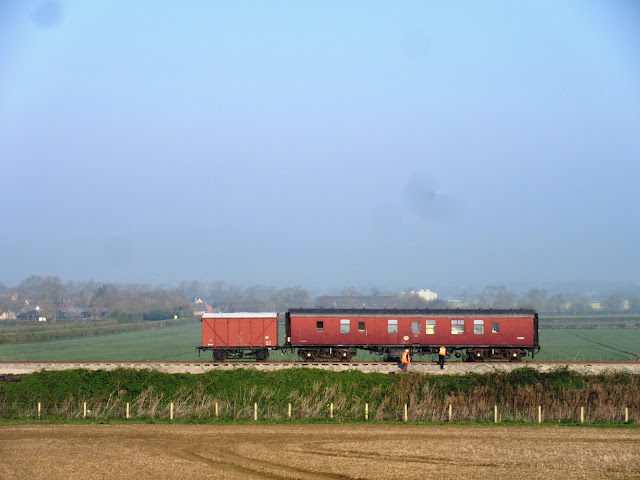 Isn't this a fabulous view! The PWay mess coach, with its little brother the tool van, on the newly laid track at Laverton. This is the bit that has recently been stressed, but it isn't ready yet. It still needs ballast on the shoulders. 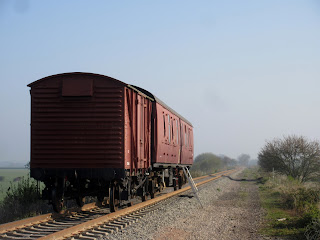 The mess coach was shunted here as it's about the centre of where we are going to work today, in the middle of about a kilometre and a half of new track that needs more work on it.

Tea first, let everyone arrive, then a briefing. We had an unusually long list of tasks today, 15 instead of the usual two or three.


The Landie arrived from Toddington, and then we were off up north.

Track laying:
We met Steve in the JCB at Peasebrook Farm, here visible in the background. We split into two teams here. One to fit one Pandrol clip in two to the track we laid last time (when the JCB broke a control rod on the back actor). You can see them at work on the right here. 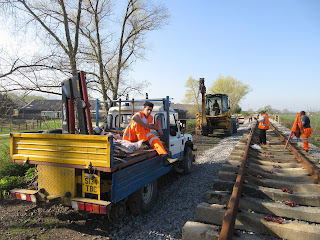 Hayden is supposed to be unloading here, but is chilling out in the back of the Landie. The youth of today. Tsk! But we couldn't do without their vigour and enthusiasm. 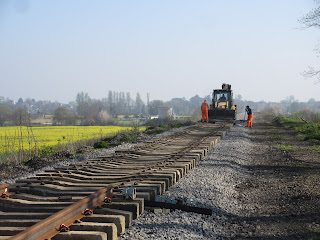 The other team cleared up the remaining dozen or so concrete sleepers off the sleeper wagons, so that they are now ready for loading again at Gotherington.

Here is Steve with a forkful, dropping them off the end. In the foreground the sleepers laid last time, not fitted with rails because of the JCB defect. Broadway is at the back in the early morning mist. 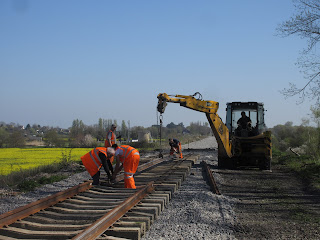 We had 8 rails left on the two bogie flats. They need to go down asap, as a new delivery is due in two weeks.

We put 6 of them on the sleepers, so extending the track by another three lengths. 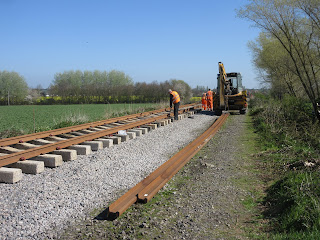 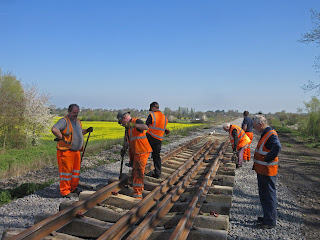 The last two rails were laid in the four foot, ready for next time. 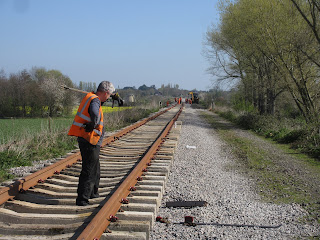 The other team was clipping up with Pandrols, quite a long stretch, as you can see. This is of course temporary, it allows the supply train to run over the track, but for the stressing still to come they all have to come out again, so we only put in one in two.

Chris is looking back at a morning's work, a bit weary but satisfied with the sense of achievement of a job well done. 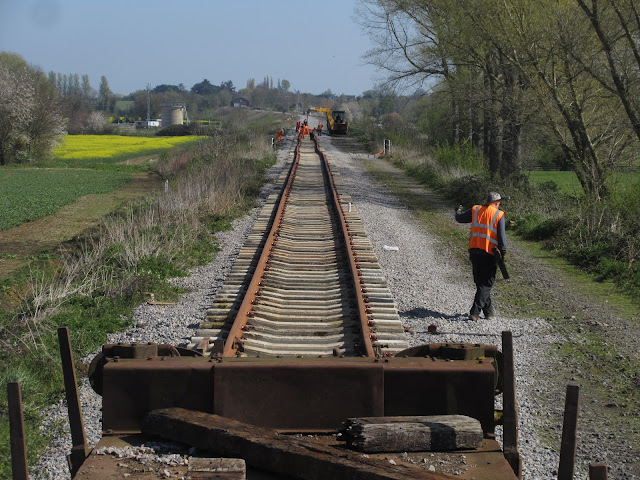 The overview from the now empty bogie flat shows the most recently laid stretch, with one of today's three panels going in at the far end. Peasebrook Farm underbridge is in the middle distance, the farm itself on the right behind the trees. 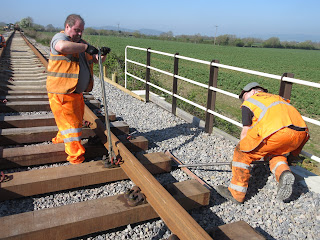 On the bridge itself, Nigel and Tony are clipping up the 9 special timbers we put on the deck. Another job ticked off the list.

Snagging
After dealing with the left over sleepers and rail, we started to deal with the long snagging list, which goes all the way back to the Laverton stop board. 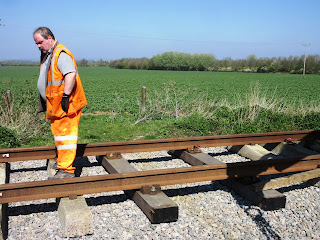 The first item was at the other end of Peasebrook Farm, where a farm crossing was first requested, but on advice from us, the landowner agreed to use the underbridge instead. In return, we improved the road surface there with some type 1. We can now take out the two timbers placed here initially, and replace them with normal concretes. 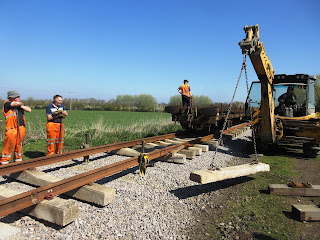 We got the timbers out easily enough; the concretes though are heavy and we are lucky to have the JCB handy to lift in the new.

We've jacked up the middle, and here Steve is about to slip in the first of the three we are putting here. 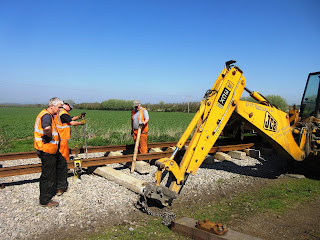 You can lift them in so far, then they need a shove from the jib and a bit of guidance from two of us on bars.

They were soon lined up, the jacks dropped, and clipped up - job done, ticked off the list, on to the next. 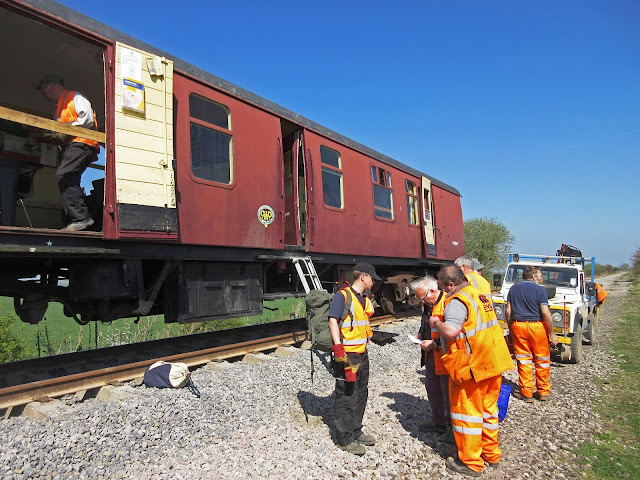 Brasserie 'Chez Paul' has had a change of address, it's now at Laverton. Bit of a 'Pop Up' restaurant then, you never know where it will be next.
Luckily we had a reservation. The diners check the menu, while upstairs the patio doors have been thrown open. We dine 'al fresco', although if truth be told, it wasn't very 'fresco' up there despite Paul and Jim throwing open all the doors and windows that worked. There was a hot fug in that long tin can. 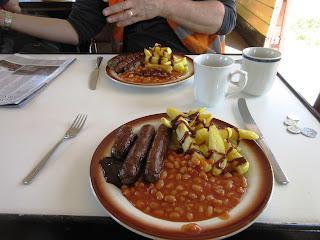 Sausages, chips and beans, tea and cake, just what the working man needs.

A copy of a railway magazine to read, with a double page spread about - us ! We're famous.

After lunch, we headed off in the opposite direction, south from the bridge. Here the stressing has pulled the rail along a bit and there were several welds that were now on top of sleepers, so that they could not be clipped up. This means digging out the sleeper, by hand, in the hot sun, the barring it along a few inches, and filling the hole back with ballast again. 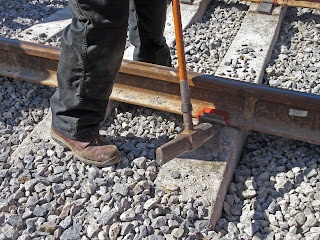 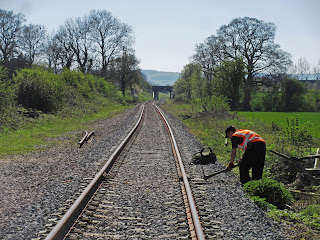 Leigh is one of our younger members (the Saturday gang is lucky to have one or two) and he volunteered to dig out the sleepers around the Insulated Block Joint.
Here we had to move two sleepers, which we also managed to do. They just need clipping up now. They have special Pandrols, which we did not have with us, so that's another job for next time. Easily done though. 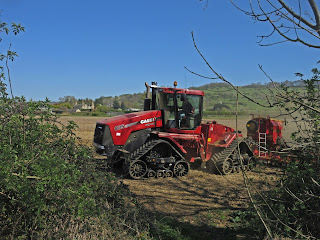 Next door, our neighbour farmer had the big guns out, and was servicing a huge field with this very large tractor. Imagine meeting that, coming round the corner at you on the B4632. Must be quite bumpy, with those triangular wheels... 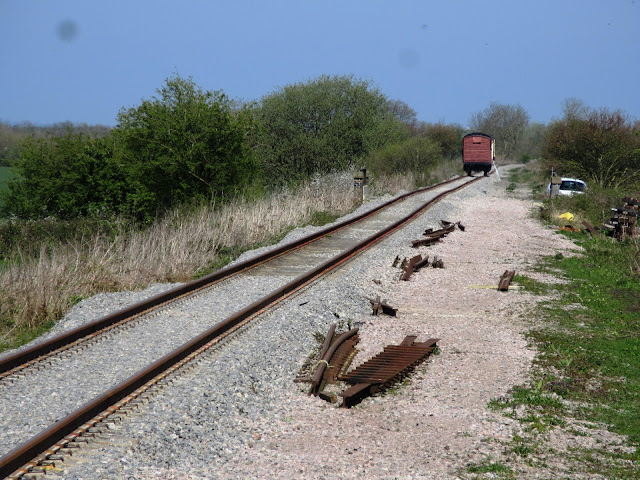 Towards the end of the day, we can get this view of the stressed track, south of Laverton bridge. You can see the bump caused by the higher bridge deck (replaced with a concrete one) and this bump is still visible, despite the copious amounts of ballast we have dropped here. In the foreground are the remains of one of the two turnouts from the former loop. This has to go to Broadway north now. 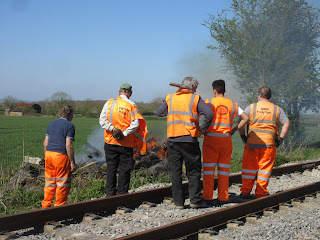 The dry weather gave us the chance to dispose of a pile of scrap wooden fencing material. 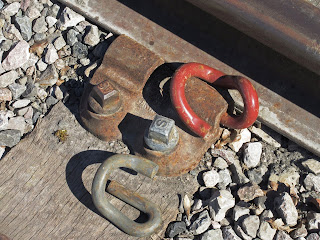 We finally 'snagged' our way to the foot crossing south of the old loop. Here the job was to put back the rubber mats that make up the crossing. To do this, we had to change the standard pandrol clips (red) for a smaller type (grey) known as an 'E'. The mats won't sit on the big Pandrols.

We ran out of time to actually put the mats back, so that's for next time. A bit more ballast clearing with the JCB is also required for that. 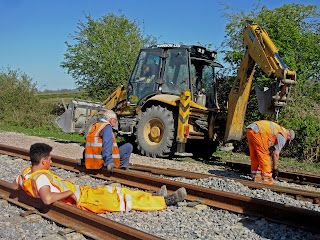 At the end of the afternoon, weariness under the hot sun does begin to creep in. Fifty years separate these two voulunteers, but the feeling is the same.
On the right, Bert Ferrule is putting a chain around the switch from the southern turnout. As we packed up the tools to head for home, Steve started to drag it to Broadway, another mile post. Two of these switches will be installed in the area of the recently ballasted 350m at Broadway north. 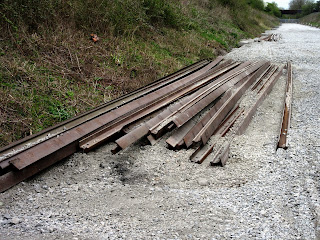 Every time Steve has had a spare half hour, he has been driving to Childswickham to pick up another pair of rails.

The pile at Broadway is now big enough to start a second one, visible in the back of the picture.

When the embankment works start in two weeks' time, we will no longer be able to bring anything in over the bridge until the end of July, so we need to position what we need right now.
Posted by Jo at 18:32