- One to sort out one or two left over snaging issues at Laverton from Saturday
- A second in the yard at Winchcombe to take the chairs off sleepers recovered from the Winchcombe relay
- A third at Gotherington, to sort further concrete sleepers to help make up the next sleeper train. 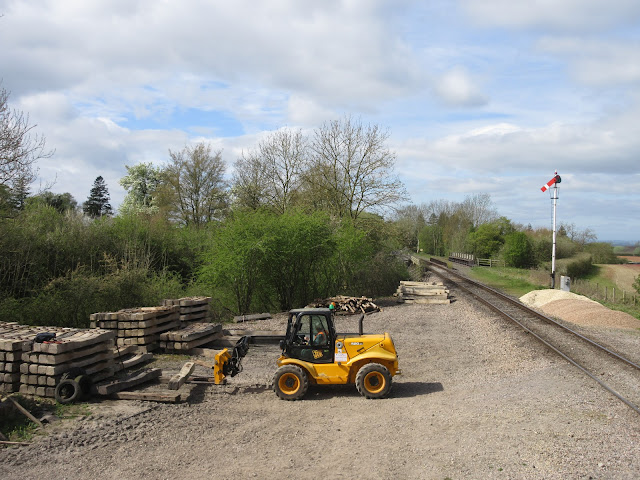 Your report today is from - Gotherington. Three of us here today, sorting and stacking concrete sleepers.

This overview of the little triangular site is from the top of the jumbled sleeper pile, which is now starting to look a bit smaller, and there is a feeling of more room around the site. Logical of course, we have already laid 2km of concrete sleepered track on the extension, with at least another km to go. That takes a lot of concrete sleepers.

Peter volunteered to bring the Telehandler, and arrived with this one. It's not our usual one, looks rather small, wouldn't they give you a real one, Peter? It turns out that this one's a rental; the company one being used at Winchcombe. It did manage 4 sleepers at once, if you didn't boom out too much, so we were OK for the day. 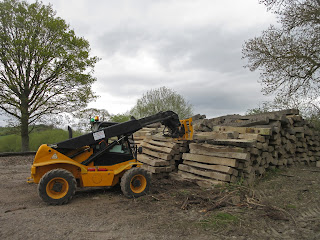 It's not an easy task to pick up sleepers from a pile stacked in a bit of a hurry. They are parallel, but there are no bearers and most are on their sides or upside down. Here is Peter having a bit of a dig at the pile, in the hope of extracting one that will stay on the forks when you reverse away. 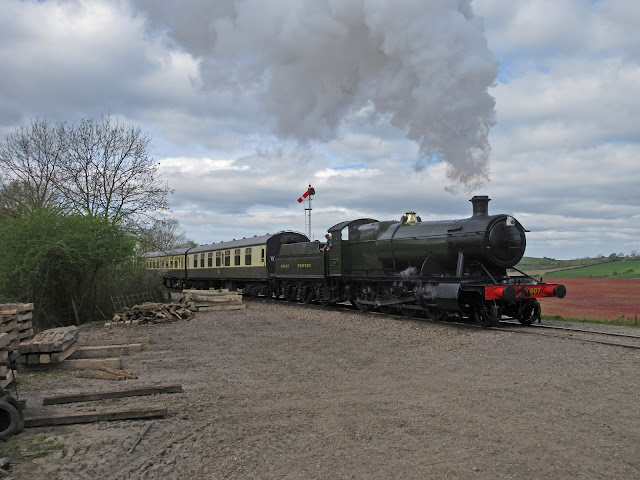 Plenty of time to watch trains at this location, they steam right by only a few yards away. Here is 2807 passing the area that will be full up when we have assembled a train load of sleepers, 320 of them. That's several days' stacking though. 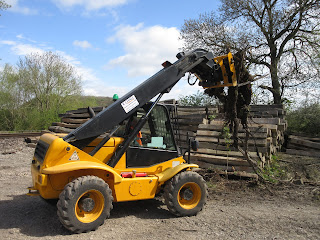 To relieve the tedium of stacking one sleeper after another all day long, fate throws in a few curve balls along the way.

Previous stacking teams had left the right hand pile alone, and we soon noticed why - there was a tree stump right in front of it. Peter had a go at removing it, prodding it repeatedly with the forks, then digging in and lifting - out it popped! 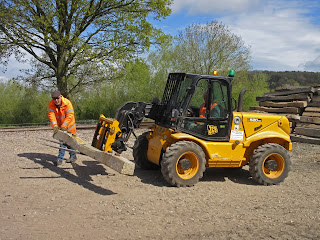 Other sleepers came out awkwardly, almost falling off on one side, or threatening to slide along as the Telehandler drove along the slope.

John helped him along with this particularly recalcitrant example. It need just a tiny bit of extra weight at the other end, and so doing we slowly took it home to the preparation base, where we assembled groups of 4. These we then took over to the growing stacks, which are finally loaded on to the train. 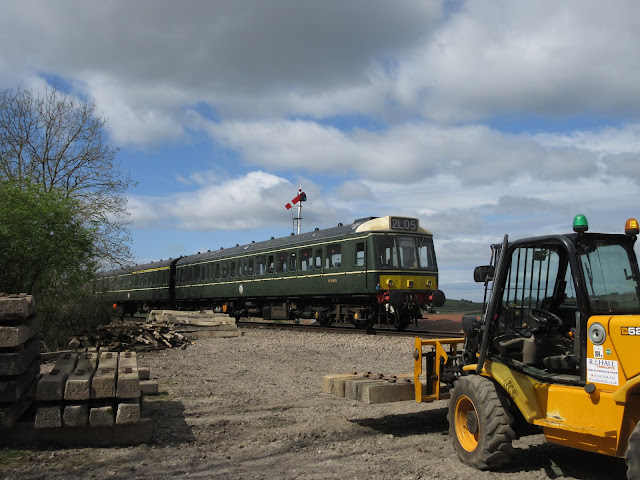 The DMU was out today too, but not so busy we thought. Its passenger numbers seem to vary from day to day - we have also seen it pretty full.

On the left are the ready piles, to which Peter will add the four in the centre. We don't manoeuvre when a train is announced. Earlier in the day the Landie brought a huge pile of bearers, on the far left, which had to be picked up from Peasebroook. They go round and round, out with the sleeper train, then back to Gotherington for more stacking. 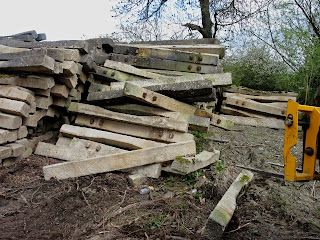 Here the Telehandler approaches the pile to pick up one of the odder sleepers, lying about. Which one to take? It looks like a giant game of 'pick up sticks'. 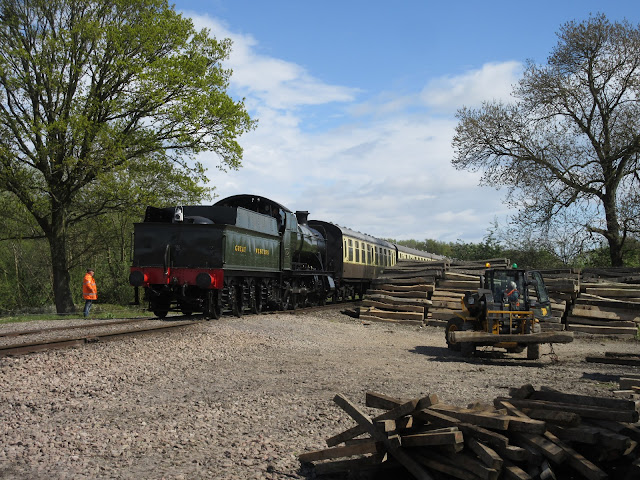 Then 2807 returned with another outward bound train. John has the timetable in his pocket, and walks out to spot them coming. Peter has paused on the right. 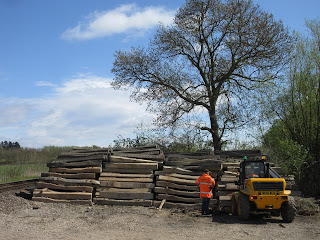 There's a huge wall of sleepers facing the Telehandler driver. We not only have to pick them out of the pile, but check them for breakages, and sort out those that are of a different size. There are also two styles of attachment - the SHC clips involving hoops on the sleepers, and pandrol clips, which are little pig's tails that slide into a little steel tube on top of the sleeper. 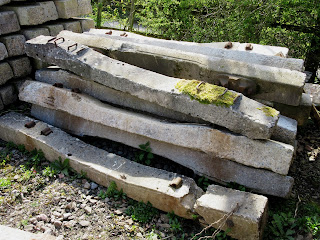 Here's our pile of rejects. Can you see what is wrong with them? They all have a default somewhere. 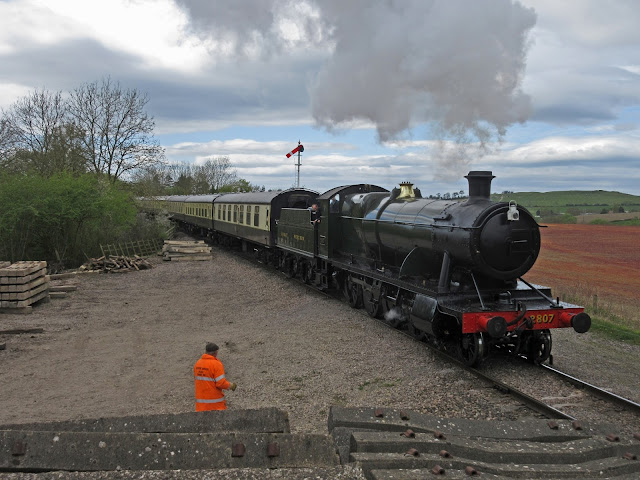 Towards the end of the afternoon 2807 returns from the Cheltenham end. The partly cloudy day you can see meant that at times it was hot, and then again icy cold, the zips on our jackets were pulled open and shut.
Lunch was on a sleeper in the sun, so we have to admit to quite enjoying our day at Skew Bridge. In the afternoon Bob came to relieve Peter on the machine, and all in all we sorted and stacked 96 sleepers today. That is added to the total of 120 that were already there, done by an earlier gang. that means another 104 are required to make up a train of two bogie flats with 320 sleepers in all, so another day's work here is required. 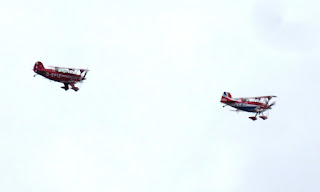 Next to a steady stream of vintage cars coming down the road, we noticed this pair of biplanes up overhead. What would they be up to?


Broadway North
Steve has been at Broadway for quite a while now. Dumpering ballast has finished now, and at the moment there are two further activities to see. 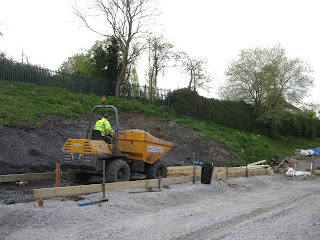 The Future Maintenance Facility is being built.

Rather than stand the containers on upturned concrete sleepers, it has been decided to construct a 9 inch thick reinforced concrete pad.

This is being constructed here. Shuttering has been put up, and stone is being brought in to lift the base and support the concrete. 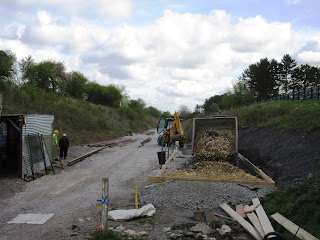 Here the stone is being tipped into the shuttering. 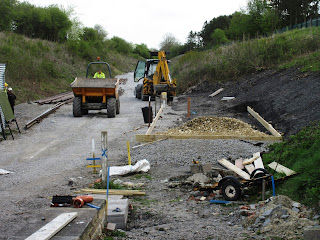 This is the view of the Future Maintenance Facility from the end of the platform. A steam loco running round would be seen at the spot where the dumper is here. 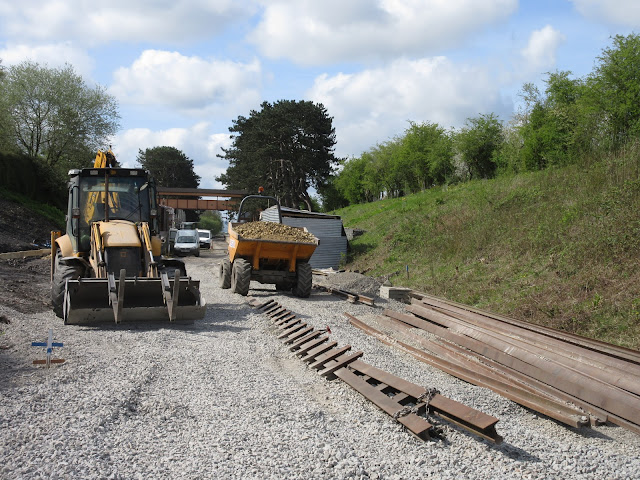 We have only a few days left before the embankment by the goods shed is closed off for soil nailing for 3 months. Steve has been busy dragging rail up from Childswickham, and more recently also parts for the first turnout at Broadway north. The parts will come from the former southern turnout at Laverton, and this will now face the other way, and become the northern loop turnout at Broadway.