Yesterday, Thursday 22nd December, our mammoth ballast laying push came to a successful conclusion. We had one 'last hurrah' with two dumpers going, and lots of ballast delivered. We got rid of it all. 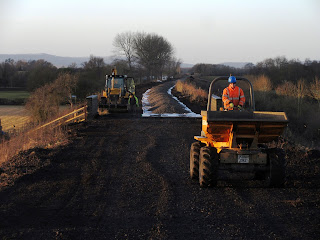 Here's our starting point, first thing in the morning. We're at Pry Lane bridge and John has just tipped the first load. It was a lovely crisp, sunny day and we've been very lucky with the little rain we've had, so it's been a real pleasure to be out here and work. 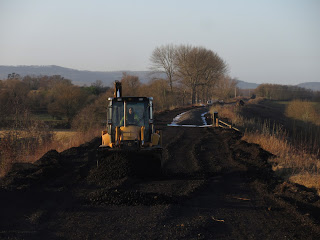 After John's first tip, Steve is there with his unmissable JCB, giving the old trackbed a final smoothing, and helping the tippers work out a line which will take the track slowly over to the other side. 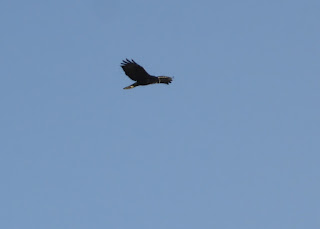 More birds of prey hovered over the embankment today. First that motionless hovering Kestrel, then this one, which looks like a Buzzard.

It was quite windy today, which they enjoy as they can soar without expending much effort. 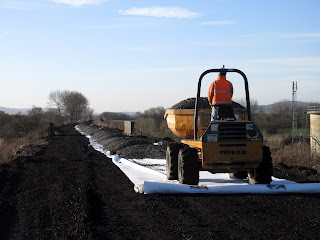 We rolled out the Terram some more. Starting from Pry Lane bridge it needs to take a new course, slowly moving away from the Malvern side edge.

Just off the right is the sewage plant. Now that we are working downwind of it, the smell has suddenly become noticeable. At least it's doing a good job protecting our rivers. 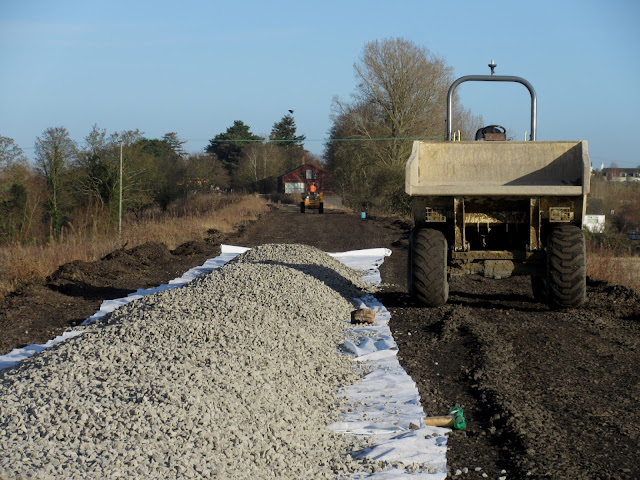 In this picture, zoomed in, you can see us now clear of Pry Lane bridge and making a bee line for that blue fuel drum in the distance. That's our marker point for reaching the other, Cotswold side. From there onwards we follow the down side in a gentle curve up to the next bridge, No.2 at Childswickham Road. Somewhere in the middle Steve will install a lump of ballast so that road vehicles that follow the track can cross over the the Malvern side. The unused track position on the railway is used quite frequently by PWay, S&T and drainage gangs. 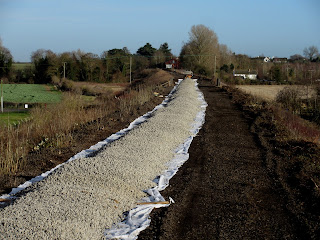 This 'drone' photograph (actually taken standing on the bonnet of the 9T dumper) shows the recently ballasted future trackbed sweeping round the start of the curve leading into Broadway and over Pry Lane bridge. All these piles still need levelling out to the right depth. 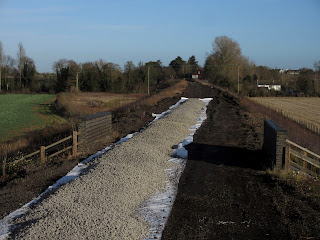 The same shot from just south of the bridge shows us gradually advancing northwards during the day, now heading off towards the fuel drum on the right hand shoulder. 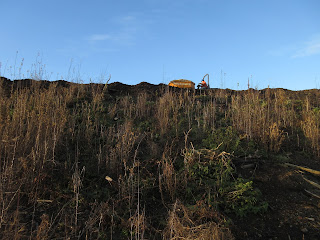 This picture, taken from the bottom of the embankment gives you an idea of its height (well, allowing for the wide angled lens distortion). Almost certainly all the material for this embankment would have come out of the cutting between Broadway and Collin Lane, north of Broadway. It would have been excavated by steam shovel out of the cutting and taken down here by contractor's railway in 1904. 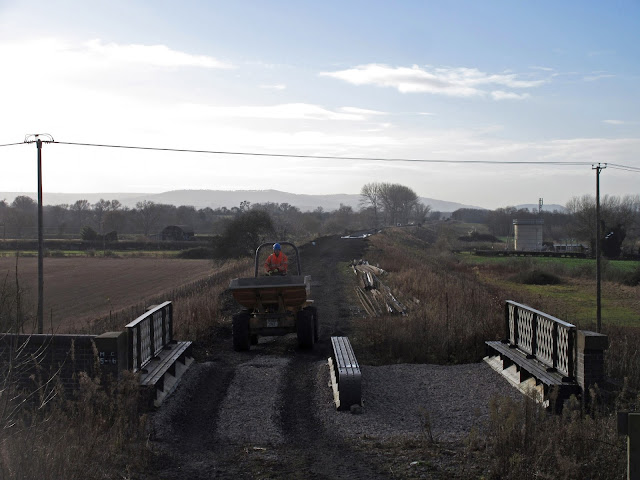 Here's John returning from Pry Lane and about to cross the Childswickam Road bridge. The current ballasting excercise will stop a few yards short of the bridge, until the rail has been moved to its final destination on or near the Broadway station site. 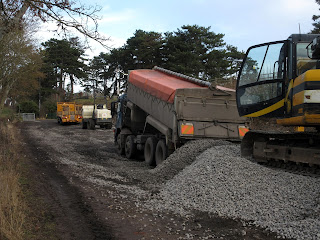 After lunch, disaster! More ballast arrived, but so did the flatbed to collect the 9T dumper. 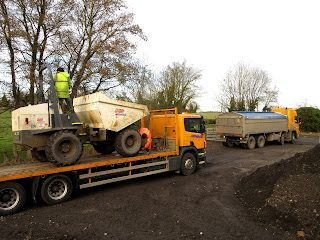 The bigger dumper was going off hire today, and was being collected early as it was a cross hire and had some way to go, back to its final owner.

Just then, the next lorry load of ballast was reversed in. 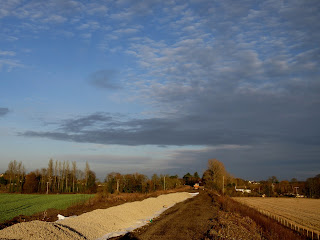 This left yours truly without wheels, but John was able to forge along regardless, getting to the 'coal face' with increasing frequency as we got closer and closer to Broadway. In the setting sun you can see him approaching the end of the line of ballast dumps in the distance. 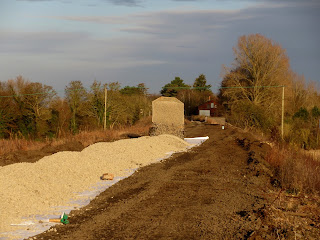 The light became increasingly orange as John achieved the final dumps of this year.

We rolled out the remaining Terram towards the fuel drum until there was none left. The last of the ballast at Broadway was then dropped on it, and after 8 nonstop days of work we drew a line under it for this year. 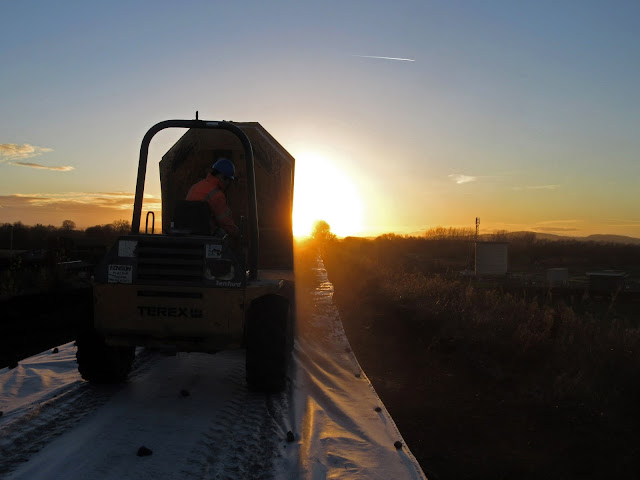 How beautiful is that - the blazing sunset and the sewage plant? John drops the final load for 2016.

We did 145 yards today, and left ourselvs a final 200 yards still to go up to just short of Childswickham Road bridge. Two days should see that completed, a job we will do in early 2017. 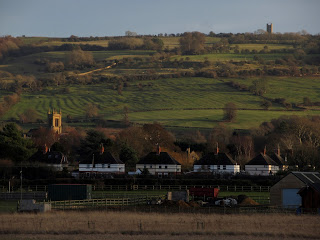 The setting sun lights up the tower of St. Michael's church in Broadway, with Broadway tower above it on the Cotswolds' edge.

Now for that final reward - a pint of local real ale. Cheers, guys!

See you next year, and have a happy Christmas and a great 2017. Remember us when you write out the next cheque, we need your support to get to the end.