Getting ready for more ballast 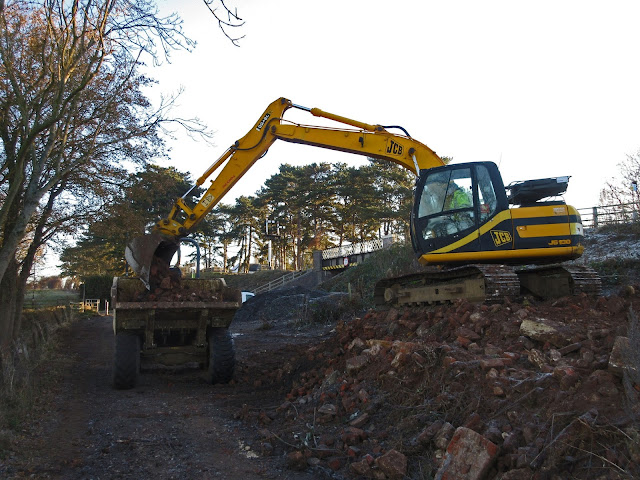 This ballast can no longer be delivered to Little Buckland, as track has now been laid there and there is no longer the room to receive the lorries.

The new ballast delivery point will be the strip of land to the SW of Broadway road bridge.

On Wednesday, Thursday and Friday a contractor was busy making the site ready, using a 360 excavator and a 9T dumper. A large pile of rubble and earth had to be cleared out of the way, and most of this was moved south to the other end of the site. 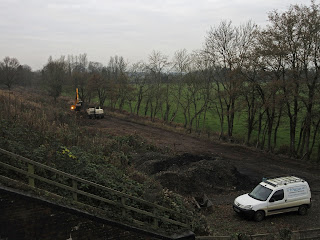 This is the area in question, seen from the top of the bridge.

The pile of dirty ballast in the foreground is infill still required for the station site. In due course it will also be removed.

The path down the side, leading to the Childswickham Road, is a 'Permissive footpath' over railway owned land.
This is a picture of the GWR notice that stood there in 1969. If anyone has an example of this they no longer want, we would be interested in securing it for re-use at Broadway. 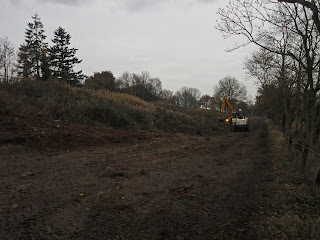 At the end of Friday, this is how far the contractor had managed to clear the site. It needs to be big enough to take a good dozen lorry loads of ballast, a loading area and a turning point for the two dumpers that will be used to shuttle the ballast down to Peasbrook farm bridge. It's quite a long journey, and each load will give you about 3m of initial ballast bed, on Terram. We will be very busy here soon. 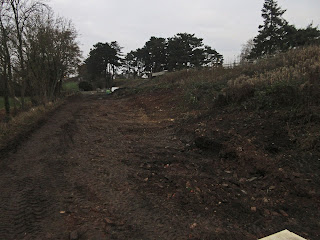 Looking back towards the road the area cleared already looks quite effective, but we had a bit more to go behind the camera until a minor mechanical defect called a halt on Friday, just before it got dark.

Conditions were a bit testing - on Thursday the temperature at 8am was minus 5 degrees celsius, the ice had to be scraped off the dumper seat and the excavator was very reluctant to start.

By Friday close, about 700 tons of material had been moved.

It is hoped to start the deliveries of ballast in a week or so. The dumping site still needs a bit more preparation (final spoil removal, ground preparation, new double road gates) 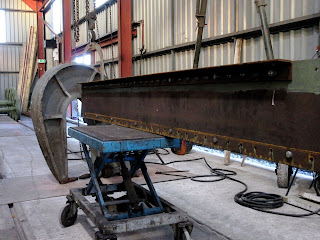 A quick visit to Toddington found that the process of riveting the canopy roof sections had started in earnest.

With concreting the floor now almost completed, the opportunity was taken to move the riveting process out of the workshop into the main shed.

The photograph shows a fascia board with one row of rivets completed at the top. 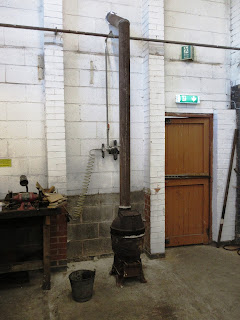 The people in the workshop also felt the cold, but they had an answer - a genuine Romesse stove, from one of the former Honeybourne signal boxes. It has provenance!

It was lit during the visit, and clearly radiated a glow around for several yards.

At Laverton, the replacement tamper was out again over two days. It handled the section from the former loop to over the bridge (the recently jacked up area) and on the second day, up the straight and round the curve to Little Buckland bridge. The final section, from Little Buckland to Peasebrook farm, will be handled by the original tamper, once the gearbox is repaired. The CWR can then be stressed.


There was quite a bit of interest in the old picture of Laverton bridge after the last post, so here are two more pictures, taken at the same time:

This one was taken trackside, and shows the view looking south (road bridge in the distance, telegraph poles on the Malvern side).

The halt has already gone, and the PWay hut on the left is also no longer there today.

Looking the other way, in the period 1960 - 1976. You can make out the pilasters from the road bridge under, and the wider paths in the cess left and right hint at the timber built halt that used to occupy his spot. In the distance the double track will sweep right into Little Buckland curve.

The state of the track is remarkable - it is well kept, with new ballast and exemplary packing on the right. This was a double track main line, with heavy freight trains of iron ore and coal.

Thanks to Tony Harden for the use of the photographs