We were back ballasting at Broadway again today, but armed with an extra hand, who was very welcome. This meant that we had two dumpers on the go, a 9 tonner and a 6 tonner. It all but doubled our productivity, so - high five! 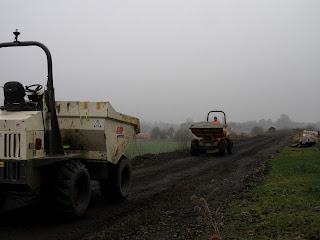 All the fun with the weather was had yesterday, and today it was grey, gloomy and we had a light drizzle as well. In this picture the first dumper has just shed its load, and the practice was that the driver would roll out a bit more Terram for the other dumper, so that he could drive straight in. That worked well. John (a Broadway member, as is your blogger) and I did the driving honours; Adam loaded us and Steve was working on completing the new drain and fence Cotswolds side. This is taking a lot of time and effort, but the reward is good relations with your neighbour. Definitely worth while. 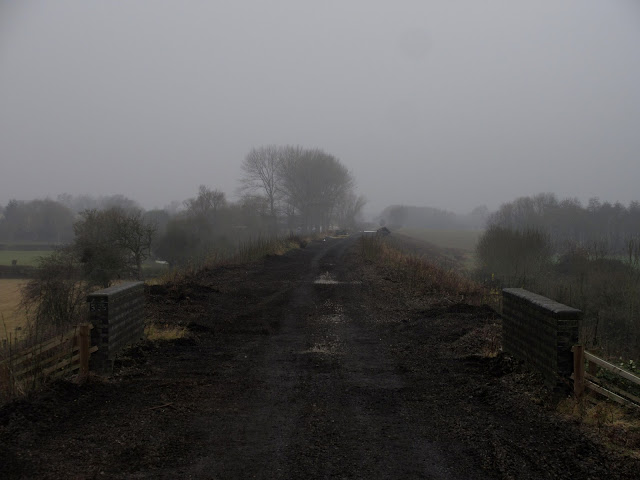 This picture, taken half way at Pry Lane, givs you an idea of the conditions today. In the distant gloom you can just make out a white stripe; this is the roll of Terram that we are heading for. The white bits on the trackbed are little ballast heaps that jump out of the dumper due to the unevenness in the trackbed; you really have to be on the lookout here but after a while you know where the rough spots are. Pry Lane bridge is one of them - slow to a crawl here. 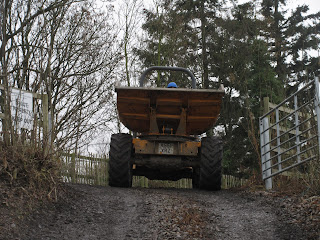 Here's a snapshot of John on the 6 tonner, about to proceed empty down the steep slope to the ballast loading area. Can you see him?

You have to know your machine to get up there and make it through the gates in one go with a full load. We haven't hit them yet ! 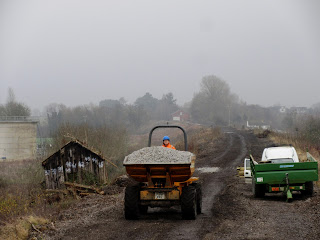 Shortly afterwards, we cross John with a fresh load near the old PWay hut, which is also where Stevie was working on the fences at the bottom of the embankment. You can make out the Broaday goods shed in the gloom behind John. 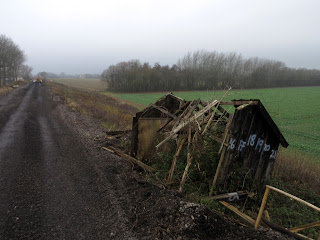 That PWay hut has had some attention, in a positive way, with a start made on dismanteling it. One side has been taken down and stacked behind it.

The sleepers are all rotten at the bottom.  Presumably the idea is to conserve them for pattern purposes, then start anew with good quality second hand sleepers eg from the Winchcombe relay that is about to start. Nice to see someone cares for the old thing. 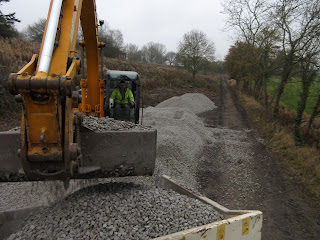 Back at Broadway Adam was slowly reversing his way down the pile of fresh ballast, 14 lorry loads if we are not mistaken. We got through more than half of it today; more has been ordered for tomorrow and Monday. It looks like we will be here for a while doing this. 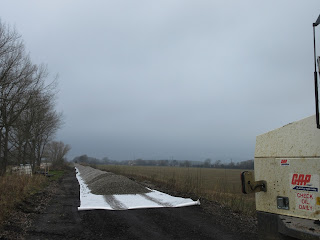 At the coal face the ballast pile on Terram is lengthening, albeit slowly.

At the end of the day we had done 16 trips each, equivalent to about 30 road miles except that this is no road. At 15 tons per trip between us, we moved 240 tons of ballast today. We are gradually leaving behind the trees that mark Peasebrook Farm on the left. 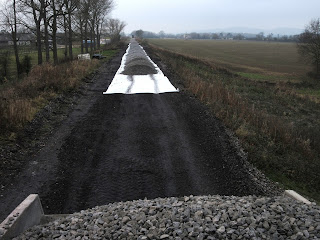 The row looks quite long now, doesn't it !

In fact we know the precise distance, because we used up exactly one roll of Terram today, which is 100m long.

So a day's dumping by two people gets you 100 meters. Oh well, with patience we will get there. After all, the distance to run is getting shorter all the time, so we will speed up gradually. 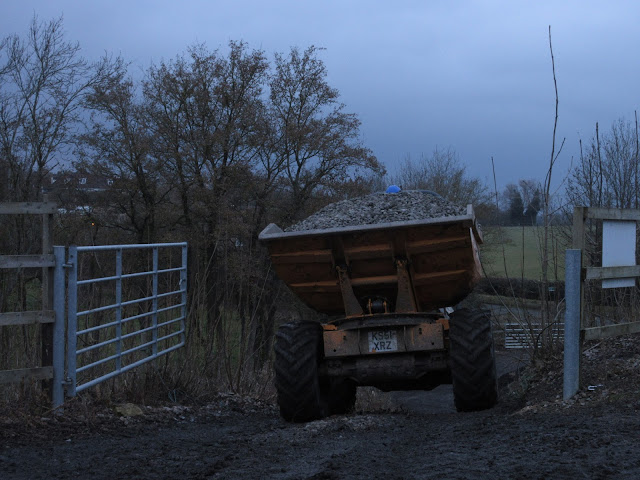 Here's John with another fresh load, chargeing up the slope. The top is the steepest bit, so it's a matter of skill to get up there, not too fast, slow enough to manoeuvre through the gate without damage, and fast enough as not to stall on the last and steepest bit.
We're good at this now ! It's very enjoyable to use your skills for the railway. 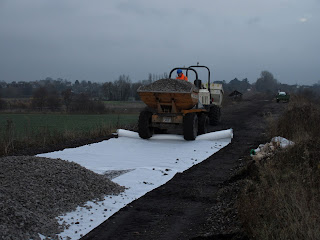 Here's John arriving and bouncing over the new roll of Terram that was dragged to the spot as the light began to fade. 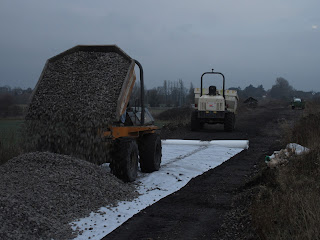 Another load of ballast is added to the lengthening pile. Tomorrow Stevie is bringing the JCB to level it all out to the regulation depth, and then tell us whether we guessed the quantities right. We only have to get the drops right on average, not each one exactly right. 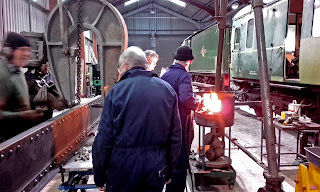 We've got some action shots of the rivetting for you, thanks to Bob Locke. He caught the loco gang actually doing it (an activity that has always elluded your blogger, despite several snap inspections)

Here you can see the rivets being heated up on the right, with a fascia board being worked on on the left. The gigantic 'G clamp' of a riveter hovers overhead under an A frame. 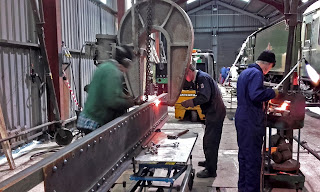 Here you can see a rivet actually going in. It makes quite a bang, we are told. The next rivet is already being heated up on the right. To date, an amazing 500 rivets have been placed, all on the fascia boards so far. Well done that loco crew! 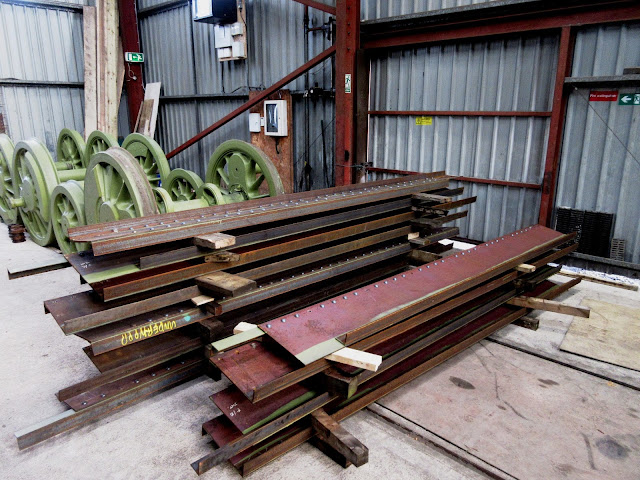 And this is the happy result: 11 card carrying fascia boards, all ready with the their rivets in. Together they give 44m of roof line, which is the distance of the canopy along the platform edge, all the way to the footbridge.