Yes, the pile of ballast put down starting from Peasebroook got longer again today, as two of us on dumpers had another fruitful day ferrying the stuff out to the coal face. The weather remained kind to us, after light drizzle yesterday, and it was +/- warm and dry. You couldn't ask for better really. 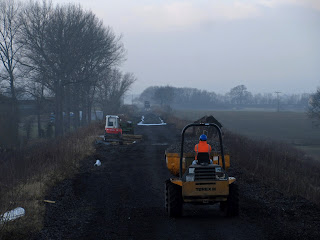 We have an early start and here is John driving the first load into the gloom. The two dumpers cross pretty much in the middle. 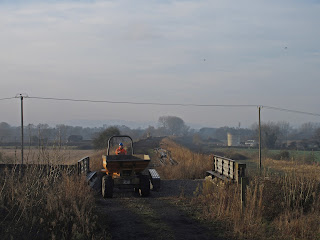 By the time we meet John again, the day has broken and the weather looks kind to us. Here he is negotiating the Childswickham road bridge, while yours truly pauses to let him through. It is here that the track will swing from the right hand side (where it has been since Laverton) over to the left, through the section of the bridge here being crossed by John. It will run into Broadway station on the Cotswolds side, with the run round loop creating double track from just before the station road bridge. Alongside the Caravan club it will be single track, at least in the first instance (a cost issue).

A passing empty dumper was flagged down by Steve to receive this gift: a huge ball of redundant fence and barbed wire.

This was taken to Broadway and should eventually end up in a skip. All the fencing on the Cotswolds side has been completly renewed. 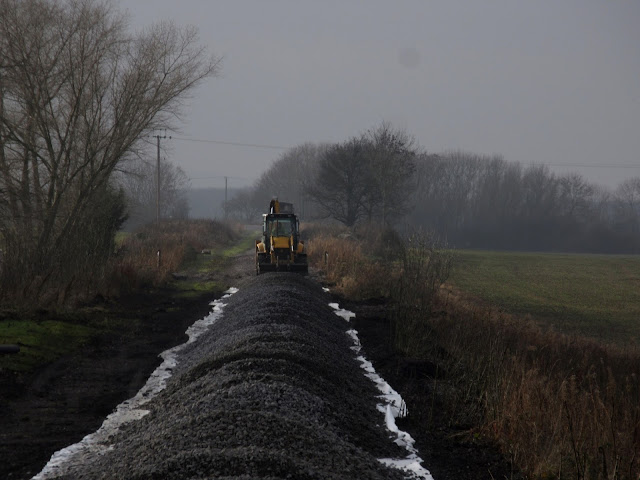 We were pleased to see Stevie on our job today. He levelled the trackbed some more for us, and then addressed the long row of ballast piles that have been building up since Wednesday. His location is just this side of bridge 4. 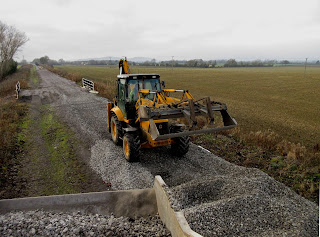 With the remaining ballast pile at Broadway diminishing rapidly (only one of the 3 fresh lorry loads ordered actually came) one dumper was detailed to assist Stevie to move the surpluses of ballast dumped around, while he graded the trackbed from bridge 4 onwards. We've got a bit too much here, so we can tip it on the other end and make it longer. 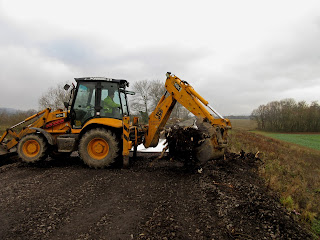 While unrolling the Terram, we came across a large tree stump and Stevie removed this for us.

You need to remember that this area was a jungle 2 years ago. In fact a picture of it will help remind those who haven't had  chance to walk the old trackbed when it was still heavily overgrown.. 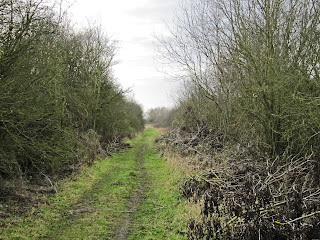 Here you are, Peasebrook Farm, recognise it? That tree stump came out somewhere on the right. We've already come a long way since this. 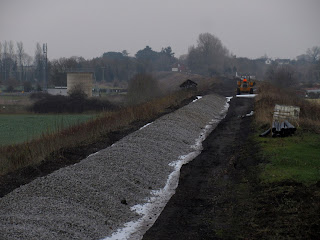 At the end of today we had done another 100 yards, being another roll of terram. In fact we could have done more, but:

- The ballast top up didn't fully happen
- The 6T dumper got a puncture.

Sadly this is the second puncture we have had at Broadway, and the cause in both cases is the same: Reinforcement steel from broken concrete brought to Broadway for disposal by other departments. 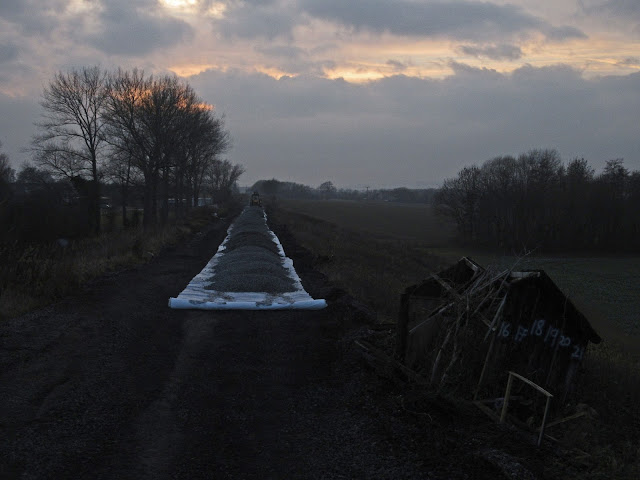 An atmospheric end of the day shot. In the failing light we reached the old PWay hut.

Ballasting work resumes on Monday and we expect to be doing this for several days yet, albeit with a pause over Christmas.
Posted by Jo at 17:44