Laverton Junction is no more

The sun brought out a pleasingly large PWay gang today, which set out to continue cutting the rails on the former Laverton loop, and moving them along south to be ready for CWR welding.

The gang split into three groups: 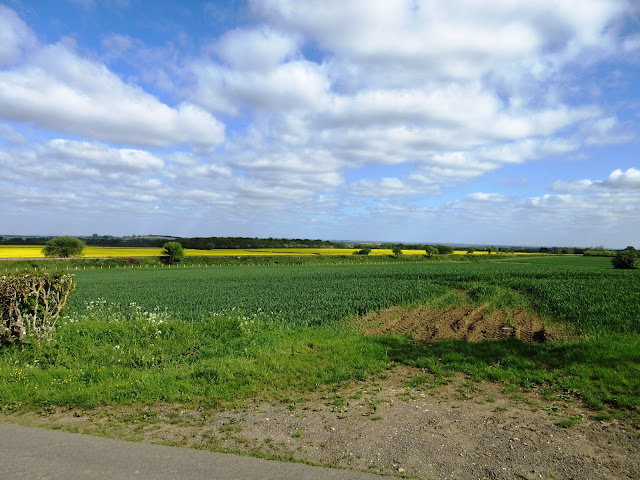 This is the scene on arrival - a cleared embankment, new fencing, fields growing fast, larks singing. There's a track down there, but it's that temporary headshunt, that still needs to be replaced. 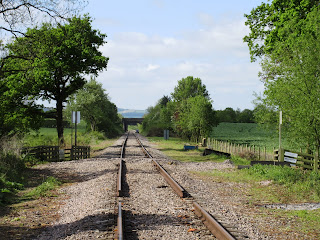 This is where the gang started - 6 panels north of the stop board. The rails concerned have been cut and dragged south, correctly spaced for thermic welding, and clipped up using G clamps. Now there's a gap. As we cut more rails, and drag them south, this gap will get larger and larger. 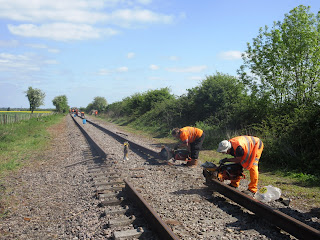 Competitive disk cutting here - I think Steve is a nose ahead of Alan, but it was a photo finish ! In the distance are the two gangs declipping, and removing fish plates with the nut runner. 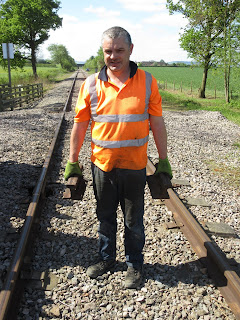 You may well ask - what do they do with the off cuts? Well, we keep those, if you have enough of them they make a useful contribution to the scrap pile. Here is Paul with a pair. Although they are quite heavy, it's somehow easier to carry two, as it gives you balance. They get flung into the back of the ever indispensable Landrover. 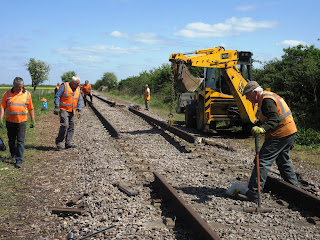 Once the 4 ends of the rails have been cut off, the next set of rails can be moved south. Stevie Wonder does that for us. Formerly, in the good old days, this would be 12 men with cloth caps.
You can see that quite a few ends have to be cut off. This costs one disk per cut, so we got through about 16 of these, then ran out. A new supply has been ordered, but did not arrive at the requested address, despite numerous reminders. What can you do. More cutting next time then. We shifted 4 panels today; 6 the previous week. The gap is getting larger now. 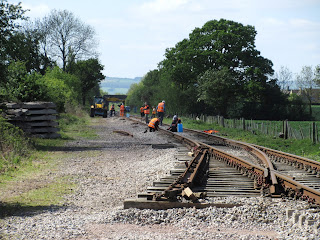 Here we have the former turnout for the long dismantled cog railway up Fish Hill, and on to Adlestrop. Another page of history turns. Laverton Junction is no more. Cog railway, you ask? Well of course, Fish Hill is very steep. 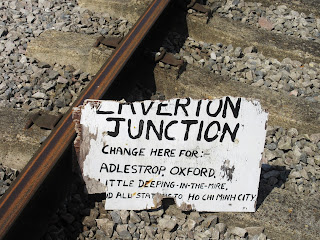 A piece of railway memorabilia bears witness to this long lost cut-off line to the OW&W. Did you know?

Time for lunch! It is cold enough for jackets and sweaters first thing in the morning, but by lunch time, it is hot and bare arms are the order of the day. 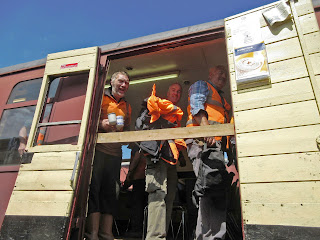 The gang retreats to Winchcombe for a two course cooked lunch in their 'air - conditioned' mess coach. Fish & Chips today, with a strawberry sponge cake from Mrs. B. Delicious it was, and washed down with a number of mugs of tea. Then quickly back to work at Laverton. 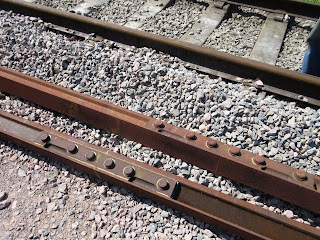 There we find these curious rails. They have been specially brought up.

These are 'IBJ's - Insulated Butt Joints. Although we are using CWR, a pair of these will be included at Laverton to separate the track circuits. Note the length of the fishplates, and the little gaps left for the track fastenings to fit in, they are that long. 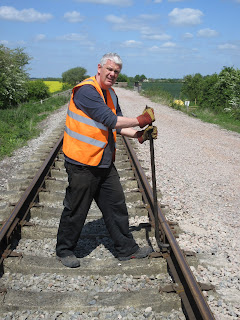 Your blogger and three others spent most of the day doing this - extracting the SHC clips from their hoops, all along the loop through line. There is a specially shaped bar for this, with a shepherd's crook arrangement at one end, and a plain chisel end at the other, in case the first end doesn't work. And often it doesn't! SHC clips are wavy in shape and rectangular. Alas, some wag has invented a weight saving clip with a swallow type tail, and this is murder to extract. The bar keeps slipping off the tiny purchase point that is the end of the swallow tail. Easy to insert they are, but then the trouble starts.
This type of fastening is now extinct, as the industry has gone over to Pandrols, which are simpler, and easier to insert/remove. Even a machine can do it now. However, almost all of our sleepers are of the hooped type, so it's SHC clips, and like it. At least we can report that we completed the job all the way up to the northern turnout. (one in two where instructed) 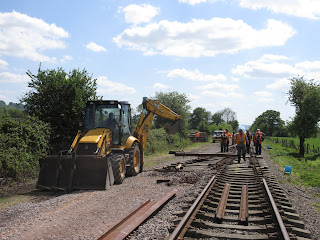 Having temporarily run out of disks, the cutting gang took to dismantling the southern loop point. This is another mile post in the removal of the loop, and rebuilding this part of the extension. Great to see this happening.

Here we see Steve lifting out the crossing. The turnout has already been numbered for reassembly, and the parts were taken away for removal to Broadway. 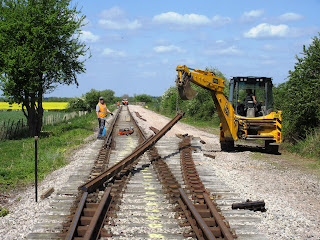 Here one of the stock rails is being lifted out. Soon the turnout was no more, and it was time to gather up the tools and loose pieces such as the fishplates, which were all taken back into the stores at Winchcombe.

This current month will see more work at Laverton, while hopefully, the bank balance will build up with contributions to the share issue until we are confident enough to order some rail, perhaps as early as June.

During the next few PWay working days we will continue with the cutting and repositioning of the through line rails. By the time we reach the position of the IBJ rails, the gap created by cutting off the fishplate holes should be big enough to insert them, as well as plain rail where the two turnouts were.

During the month of June the gang will be working at Toddington, where the loco loading ramp is due for some attention. In the meantime, contractors will be repairing the three culverts at Little Buckland and Peasebrook farm. As they complete that job, the PWay gang will have finished at Toddington and we should then be in a position to start laying some new rail and driving the rail head further north.

If we have enough money - have you sent your cheque yet?