A quick survey of the extension finds much work in progress since the last report a week ago.

First of all, the track: 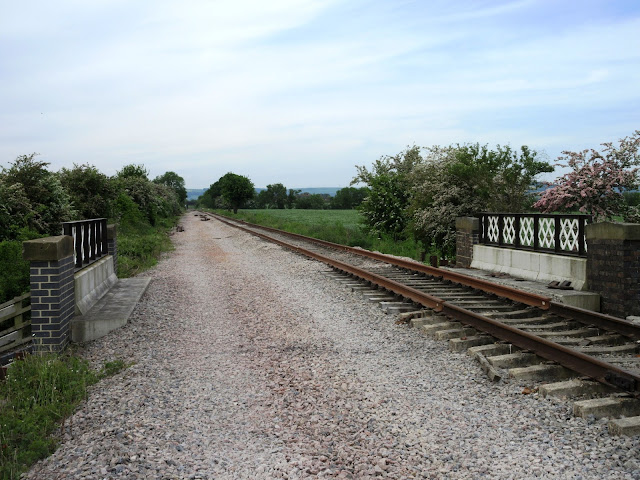 The removal and relay of the loop has progressed well. With the loop road now gone, as well as the southern turnout, attention has focused on the through road. Here the through road rail has been removed and replaced with new, slightly heavier gauge rail from stock.  You can see the change of colour, as the last few yards of old through road rail are still left to do on the right. The location is Laverton bridge, just short of the northern turnout. 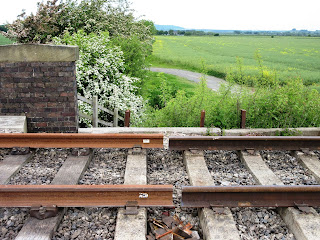 With this point reached, we have run out of new rail to use, and need to buy more. There is still the rest of the loop through line, the northern turnout, and several hundred yards of headshunt to replace, before we can start on more of the actual new track laying beyond bridge 5.

Have you bought any shares yet? This is what the money is for. Please help, we're not half way yet. There is a link to the prospectus on the right here. 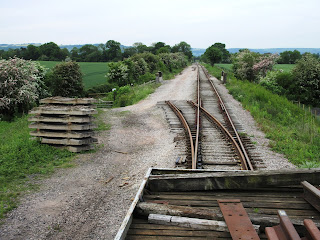 Here's an overall view of the location of Laverton Loop. The actual run round line on the left has been lifted, and the ballast scooped back into Dogfish and used at Toddington. A stack of concrete sleepers has been positioned, ready to replace the northern turnout with plain rail. In the upper centre you can see the pilasters of Laverton bridge, the point at which the new rail now ends. There is none left on the bogie flat in the foreground, just some short IBJs. 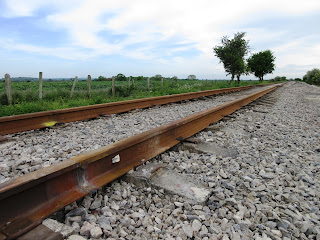 The other bit of news at Laverton is that the welding team has already been, and started welding up the new rail laid, as well as the acceptable rail near the stop board, which had the ends cut off for CWR.

The picture shows a new welded joint in the foreground. The location is near the site of the former southern turnout

The welding took place in blocks, leaving other welds still to do in the middle, so the team will be back for these, and more. 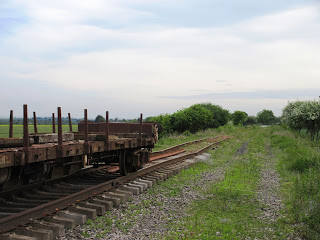 The PWay train has been pushed up and down a bit and here it is on the old Laverton northern headshunt.

This roughly laid bit of track (say 300yds) needs relaying in better quality rail, until it joins up with the start of the extension proper, which you can identify with the lighter patch of ballast in the far distance.

Then, on to the works being carried out by the contractor. We left him at Bridge 5 last week (Little Buckland). The centre of activity has now moved on to the two culverts north of Peasebrook Farm, but at Little Buckland the brick layers were still at work. The Malvern side headwall has been done, and here they are finishing off the Cotswolds side. 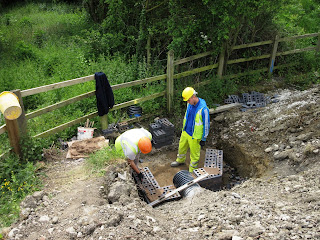 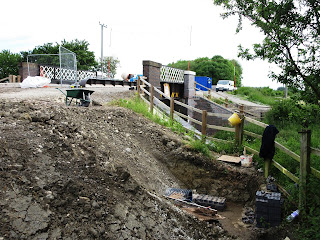 The gap has been largely filled in,  but still needs the ballast replacing before track can be laid across it. This picture also shows the Cotswold side headwall, but in a view designed to show the context with the bridge. It's right next door. It's strange to have a culvert under the line right next to a road bridge, but that's because the road dives down 6ft to get under the line, and while the road comes up again the other side, the water won't do that! 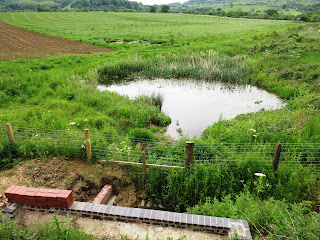 There are loads of drainage issues around our 15 mile line, which cuts right across the rainwater runoff from the Cotswolds seen here behind. Andy P and his drainage team have done brilliantly to repair all the problems, and indeed even to find them. An example can be seen here - a damaged headwall, and the discovery of a hidden pipe following the foot of the embankment on the left, which they have given a new headwall (just visible as a red stripe). The pond seems to postdate the drains here. 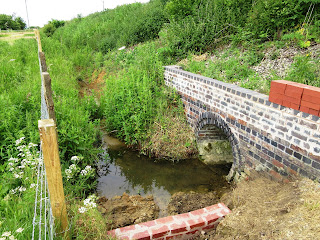 This picture of the same culvert shows the improved headwall (the headwalls are always under pressure from debris rolling down from above, overwhelming them and even pushing them over) and also the newly built headwall for the extra pipe discovered underfoot. To add to the complication, that same new pipe was then found to have been penetrated very crudely a few yards back, leaving a big hole in it, which is not conducive to freely flowing water. 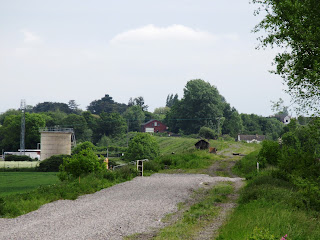 On to Peasebrook Farm. This telephoto shot compresses the distance and shows:

- The current end of the new ballast bed at bridge 4
- The curve towards Broadway, with the red brick goods shed visible
- A hint of yellow, centre left, which locates the 360 digger working on the next culvert.
- A sleeper built PWay hut, in very poor condition, and a tank at the sewage farm at Pry Lane (bridge 3) 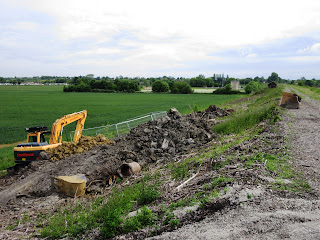 Here is the yellow 360 digger, showing where the contractor is now working. The embankment is very high at this point, and it's another case of a culvert that needs the end rebuilding due to damage from above.

The other side (Cotswolds) also needs doing, part of this contract. 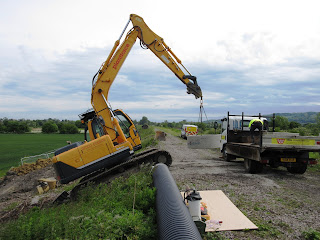 In this picture a concrete ring has been delivered and is being lifted off the truck, ready for building into the new chamber at the foot of the embankment. 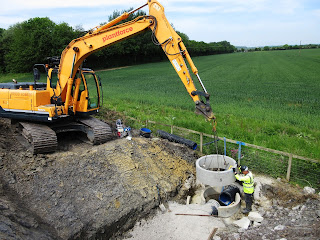 A few moments later the 360 had carefully picked its way down the slope again, and was ready to lift in the new ring.
A new pipe has been laid at the end of the culvert; beyond the ring it empties into a ditch in the field, identifiable by the irregularity in the grass. 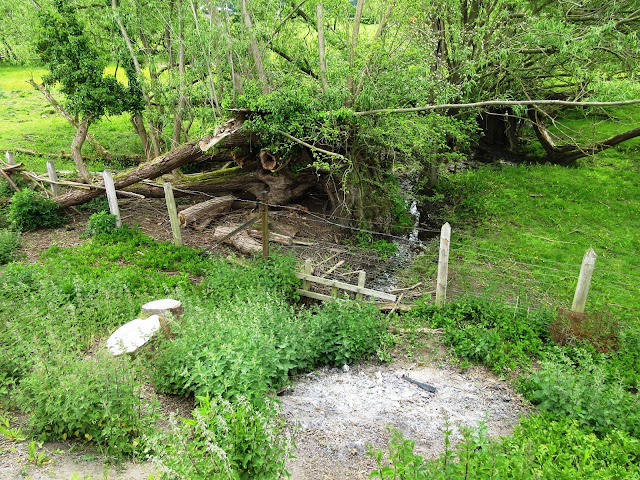 This is where the water comes from, on the Cotswolds side. Trees have collapsed on to the stream on the other side of the fence, where it runs through a shallow mudbath. What happens on our side of the fence is not clear, and will be sorted out by the contractor. 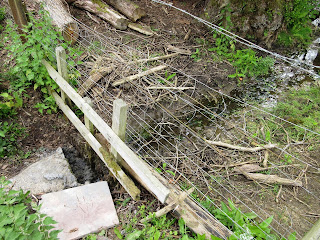 Where there should be a sturdy headwall to protect from debris from above is just an end of a pipe, with plenty of silt around. You can imagine that a backing up of storm water here in heavy rainfall will do the embankment no good at all, so this end of the culvert will also be addressed. 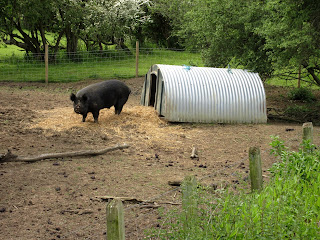 Some people like mud.... like our neighbours here. Two huge hogs had just vanished inside the shelter followed by much grunting; the third was standing guard outside. 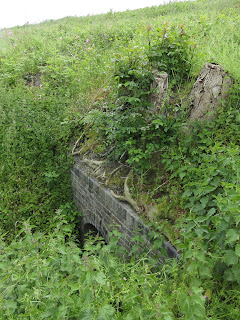 Our contractors will be on site for about 8 weeks in total, so there are still several more jobs to do. One of these is the Malvern side of another culvert nearby, which has been enveloped by a tree (since reduced to a stump, but the roots are still down there.) This is quite a big one, with a brick built arch over a fast running stream.

More news in a week.

A Broadway 'Last Mile' promotional video, made by a member of the PWay gang:
https://youtu.be/eQ0rBIZzBjI
and

35006 P&O on a train with 14 on:
https://www.youtube.com/watch?v=e3OJDrB0Koo
It's been a 33 year wait, but worth it. What a magnificent job they did with this former Barry tenderless wreck.