Yesterday a contractor arrived on site at Little Buckland, to start work on repairing the blocked culvert just south of the bridge.
This is the work that is necessary before the track laying can proceed past bridge 5.
A salt glazed pipe passes through the embankment here from the Cotswolds to the Malvern side. It is blocked/broken somewhere near the middle. 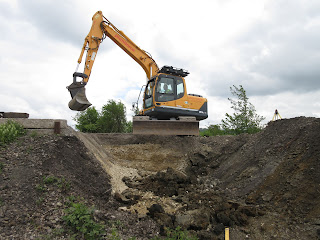 Half of the embankment was already dug out at lunchtime today. The entire pipe will be replaced by a new one. The concrete sleeper wall on the left marks the edge of the bridge wing wall. The yellowish stone towards the LH side of the new hole is the infill placed by the contractor that rebuilt the bridge abutment here. 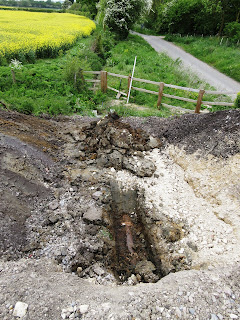 Looking down from the top of the embankment, you can see that the old pipe has been reached. The drain carries on beyond in a straight line, following the line of the road but above it.

The lie of the land is strange here. The embankment is not quite high enough for a bridge, so when built the road was lowered by 6ft here, so that it dives under the line. The drain on the other hand is at the level of the original ground, so has to run above it until the level of the road is normal again. 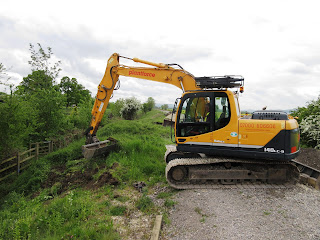 Turning round the other way, the excavator is taking out a few chunks from the Cotswolds side, in order to make himself a ramp for the Malvern side. While digging, a piece of Brunel bridge rail emerged from the weeds, and was put to one side for future recovery. 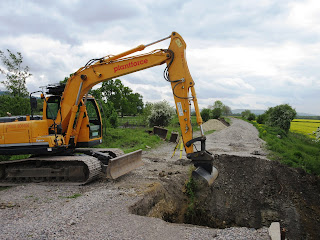 Back to the Malvern side, and the excavator is dumping a bit of spoil into the hole in order to create the ramp.
In the background you can see the railhead. It's so close that it's not worth spending only part of the day to bring it up to the site. Once this hole is closed again, the PWay gang will be able to resume track laying - the next obstacle isn't until Peasebrook farm, where two more culverts need repair. This forms part of the present contract, as does the establishment of a drain parallel to the embankment. 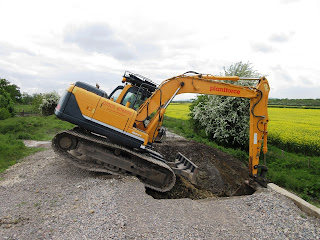 Here comes the delicate bit. Having armed itself with a heftier bucket, the excavator carefully makes its way down the ramp it just built. The skill of these operators is quite fascinating, all very calmly executed. 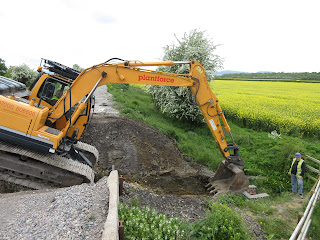 Happy with the position on the ramp, the operator starts to scrape away the clay on top of the Malvern end of the salt glazed pipe, aided by the signals from the banksman at the bottom.

We will report further progress here from time to time. The cost of this work is being funded from the share issue, so you can see that your contribution is being used very well indeed. In fact it is the first item on the share issue budget that is being applied.

The S&T gang work to a different daily schedule than the Broadway gang, and the two do not necessarily overlap. Here they are on a Tuesday, a non-working day for BAG, busy in the locking room. 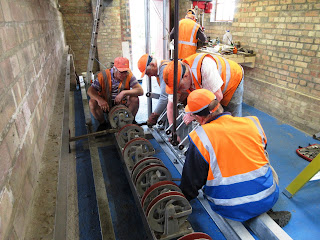 The work in hand there is the fitting of angle cranks and signal wire wheels for the signals and points operated by the levers above in the operating room. Downstairs they change direction from vertical to horizontal, pass through the tunnel and at the mouth of that, turn left or right depending on the job that they do.
Although the second loop originally intended for the area in front of the old goods shed has been put on the back burner for budget reasons, the layout of the box and hence the arrangement here in the picture is being constructed so that it can easily be fitted at a second stage.
The wheels in the picture are bolted to 'C' bars attached to the concrete floor. The point levers are arranged to be positioned in the middle of the frame, with signal wires to the left and to the right. The job today was to fit the first of the rods that operate a point. In this case, the rod will operate a locking bar. Initially, there will be 3 points at Broadway, two for the loop and one for a siding at the headshunt.