Good progress is being made by the contractor at Little Buckland. The culvert has been fully excavated, the old salt glaze pipe removed, replaced by a new double skin pipe and at the time of the visit was being back filled again. A road roller dropped into the hole is used to compact the infill. 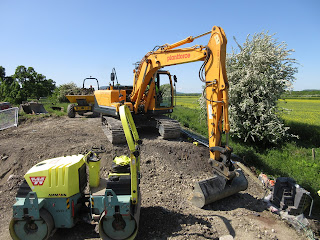 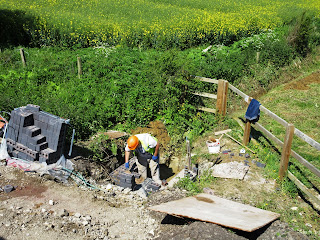 In this picture the Malvern side outlet is being rebuilt by a brick layer, who is standing in only half an inch of water. Lucky with the weather there, it could have been a lot worse, so conditions are pretty much ideal. 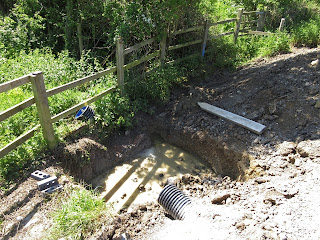 The Cotswolds side still remains to be done. Despite several dry days, there is still water here. Whether this comes from the (raised) ditch along the road, or from the fence line along the foot of the embankment wasn't apparent to yours truly. 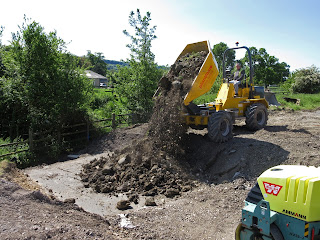 Infilling continued this morning, and at this rate the contractors will soon move on to the next job, which is at Peasebrook farm, where two culverts will be repaired.

The plucky PWay gang continued on Saturday and took out the remainder of the southern loop pointwork. 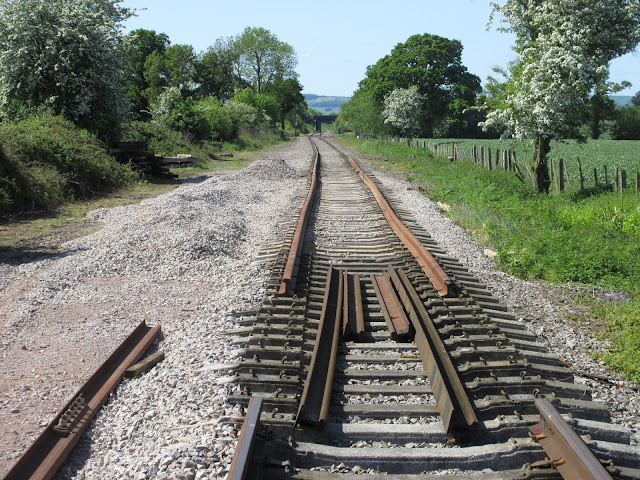 In this picture you can see the ballast removed from in between the timbers piled up on the left, and concrete sleepers and new rail from stock laid in the gap. All the rail between here and the foot crossing by the stop board in the distance has now had the fishplates removed, been cut to remove the bolt holes, and dragged up to close the gaps. It's now ready for welding up. One of the special insulated block jointed rails with the 6 bolt fishplate lies on the left. 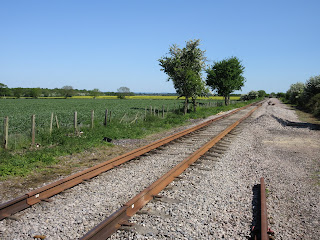 Looking north, the lighter rail is the new material. The joints in the foreground are ready for welding. 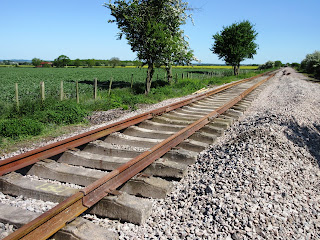 This detail shot shows how an IBJ has already been inserted; it's quite fast progress.


Next, the existing rail in the former through road will be replaced with new from stock, and used elsewhere. The current stock should take us up to the road bridge, just short of the northern loop point, in the far distance. The gang also has some work to do in the yard at Toddington, so there may be a short break on the extension while this is done.

Not an extension item, but no obvious place for the news and it is of interest: The Harvest Home inn at Greet, close to Winchcombe station, has been pulled down! 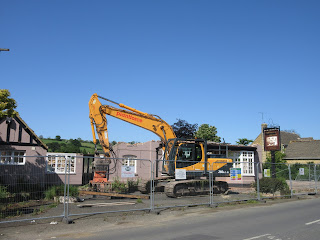 A developer plans to build three houses on the plot. 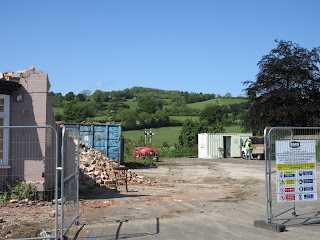 The new house owners will have a grandstand view of the railway - check out the bracket signal just visible across the former car park in this picture.


The history of this building is sketchy, and if anyone knows more, a comment on the blog would be welcome.
It was built, apparently as a watering hole for the labourers of the new line, in about 1905. It was not unknown for railway employees to nip over the bridge and into the pub, providing it was a quick one!