Today was announced hot, and - it was ! We're working out on an embankment here, and there is no shade, the sun is unrelenting, not a cloud in the sky. 29 degrees at lunchtime it was. Suncream factor 30, hats, high collars, two-litre bottles of water by your side. And more of the same is announced for tomorrow, with a slight increase in the temperature too. There is a slight rueing of the day I sat in my living room in January, complaining about the cost of heating it ...

So what did we do today? 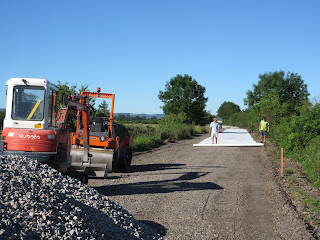 First thing was to roll out another roll of Terram, which brought the end of it near the relocated ballast pile, once again freshly resupplied early on. Another 20T truck load arrived during the day. 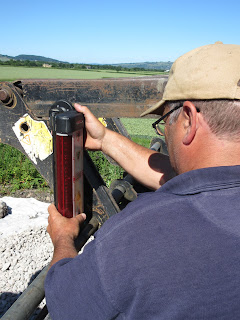 After his adventures at Toddington yesterday, Steve was back on site with the JCB, to pursue the task of levelling the dumps of ballast.

Here is a picture of him attaching the receiver unit of the Laser level (actually a theodolite, I'm told) to the front of the JCB.

Just put the bucket down, and reverse away, keeping the indicators in the right field? It's more difficult than that. The trackbed falls away out of the cutting at Laverton, levels out, and then rises again at 1 in 440 up to the summit at Broadway. Where are the breaks in this then? And the existing trackbed, while of good quality, does undulate slightly, leading to thicker bits of ballast added, and then again thinner bits. How to stick to 8 ins of depth, without it getting too thin, or wasting money? 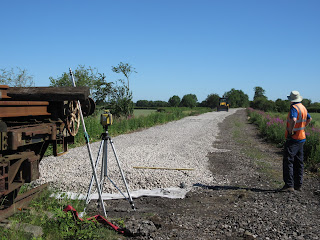 A second volunteer was also on site today - Andy Smith. This proved useful in handling the manual Laser receiver, and measuring the depth of the ballast here and there, while Steve got on with the levelling job a bit further along. 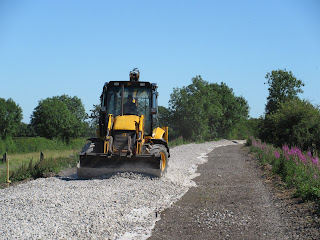 At first we spread about the ballast dumped here last week, later on with some low spots apparent, we had to resort to extra ballast from the guys working round the bend - yes, the prepared trackbed now stretches out of sight. 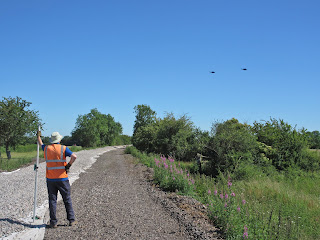 Then those Merlins paid us another visit. So impressive. That's 15 tons fully loaded up there, one of those! They seemed to fly around Broadway tower, describing a large circle which included a pass quite close to where we were working. 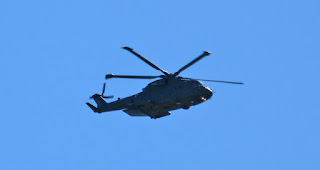 They got so close that I was able to take this shot of the fly-by. Is that flap open at the back there? They must be out on manoeuvres, dropping stuff off. 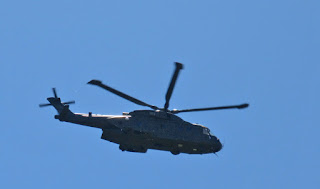 Here's another look - yep, that loading hatch is definitely ajar. That's our boys up there, good for them! 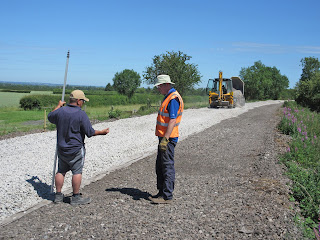 Then back to the serious stuff. Here is Steve explaining a finer PWay point to Andy, while in the background Tom is delivering one of the 'top up' loads to a low spot. 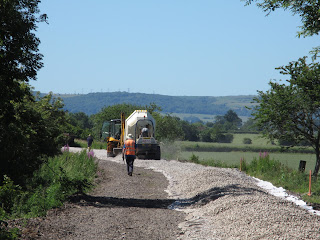 Pretty much the same scene, seen from the northern end. In the foreground lots of little ballast drops, which haven't been levelled out yet.
Andy spent a long time walking back and forth. Your lump hammer, tape measure, Stanley knife, water, coffee, sandwiches et al are always at the other end, 500yds away. It's like that. Or as a Polish engineman once explained to me: 'System.... !'
There's no argument with that. 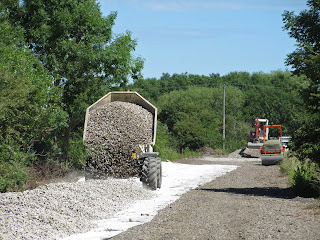 While Steve, Andy and yours truly attended to the levelling at the railhead end, Tom and Adam carried on dropping fresh ballast on to the Terram rolled out this morning. You can see that they are approaching the end of it here. Remember that pole - it's by Little Buckland bridge, so progress is quite good. 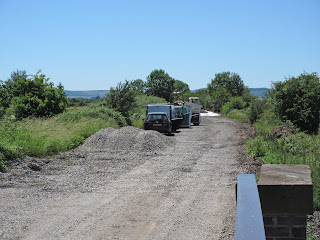 By lunch time, the ballast supply was getting low, despite the extra load supplied mid morning, and an extra roll of Terram ordered had still not been delivered yet. Andy and I left, with progress as visible in this last picture - the new ballast bed is seen approaching Little Buckland bridge, from where the photograph was taken. Steve had, at this point, also levelled sufficient for the first 5 panels that we are mulling. That bit is ready.