A good day today, as the dumping and ballasting activity inched its way up the trackbed, and finally came to a halt near Little Buckland bridge. 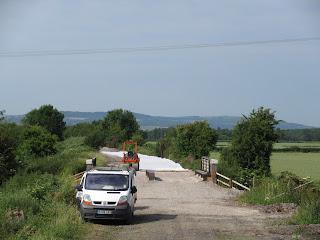 Here is the last roll of Terram, which ran out just before the bridge, first thing in the morning. It's another hot day, up to 30 degrees, but with thunderstorms looming. The rails we have in stock should reach to just over the bridge in fact. 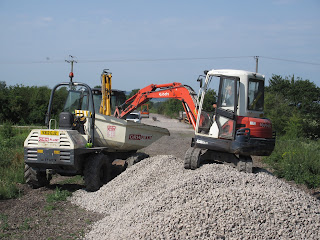 Before we start the dumping on Terram, Steve needed an extra three loads down by the beginning of the curve, where his laser guided measurements had detected a low spot. The overnight ballast lorries have now (on instruction) emptied their loads a little way into stage two of the extension, where a stockpile will be made. This will be used later to pack the newly laid track on stage 1. 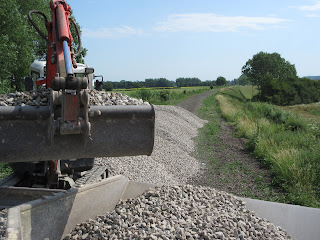 Looking the other way, the curve continues towards bridge 4 at Peasebrook Farm, and then a straight line towards Broadway. It's all pretty level and clear around here, ready for the next jump. 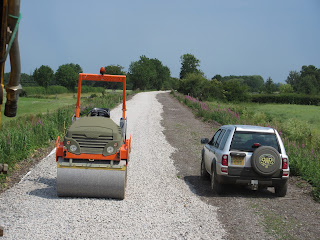 Steve was working at the railhead end, putting some final touches on to the initial prepared length, which currently stretches up to the trees at the start of the curve. After putting three extra loads into a low spot in the middle, Steve was finally satisfied and we gave it a go with the roller. This has got to be the smoothest surface ever for track laying!

We have enough FB sleepers on site for an initial 5 panels. More are available elsewhere along the line, but the PWay train at Laverton will be isolated for 5 - 6 weeks while contractors sort out the small slip, and repair the culvert in the same area. The contractors are now expected to start on Monday. So there will be an initial burst of track laying, and then a pause. 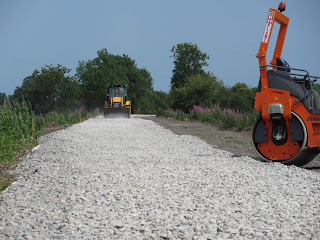 Steve had the Laser receptor attached to the JCB again, and this really works quite well. Here you see him backing away from the railhead with a final pass. The roller has been shunted to one side to give the theodolite an uninterupted field. 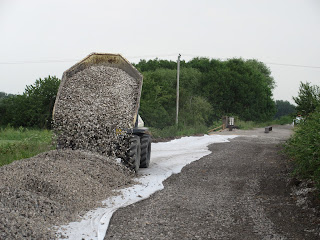 While we were doing this at one end of the site, Adam and Tom were working at the other end. The sheet rolled out in the first picture is here being covered in ballast, with the pilasters of Little Buckland bridge just visible behind. Nearly there! The sky has now darkened and a thunderstorm drifted along the Cotswold Edge, and a bolt of lightening was seen to strike a field adjacent to the line! It remained hot and humid. 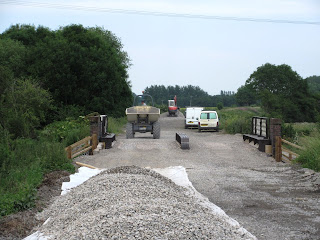 One of the last dumps of the day. Little Buckland has been reached, just two more dumps are needed. 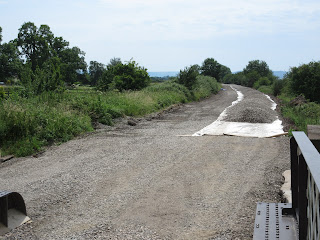 This picture was taken from the same position as yesterday's on the bridge- the ballast dumping is almost completed. Tomorrow should be a wind up day, with no work here on Friday (could change, we are flexible!).
Steve has roughly levelled out most of the new ballast round the curve, but the area in the picture still needs fine tuning.

Another update should be possible tomorrow.
Posted by Jo at 16:52