Yes, today was a milestone - the first day of actual track laying on the 2 mile extension to Broadway.
A small team of 11, supported by the JCB and the Telehandler, laid the 125 concrete sleepers we had previously stocked on site, and completed the job with 5 pairs of new rail. The extension has kicked off with the first 100 yd stretch laid.

Here's how we did it: 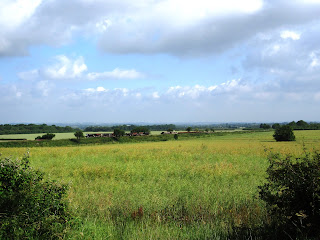 First of all, a quick overview of the site. This is taken from the road leading to Laverton halt and bridge, looking north. In the centre you can see a number of Dogfish and Catfish ballast wagons, and two wagons loaded with concrete sleepers. The extension starts to the right. As you can see it was a beautiful day, 'good track laying weather' except for the fierce sun. 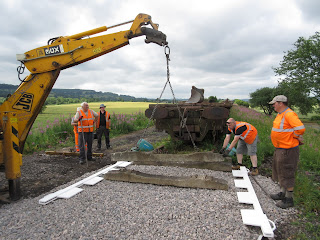 This is the railhead as was. The old LT bogie flat serves as a bufferstop; behind it, two wagons of concrete sleepers. Three have just been retrieved from underneath it, and are the first sleepers to be laid on the extension.

To the left and right you can see a pair of home made spacers. How these are used, you can see in the next picture. 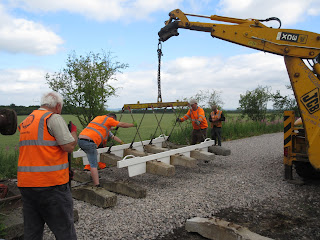 We have a jig that holds 4 sleepers at exactly the right spacing for laying down on the track. However, they do dance about  a lot, so to keep them the correct distance apart, and to form the correct spacer from the previously placed sleeper, the home made spacer jigs are used.
Two men guide them in, calling out the required movements to the JCB operator: Tod - Broadway, and Cotswolds - Malvernside. Two men stand by with bars to inch them finally into the right position, called out by the ganger in the rear of the picture. Those sleepers have a mind of their own, and, despite the spacers, they like to hop sideways just before they make contact with the ground. Dang ! 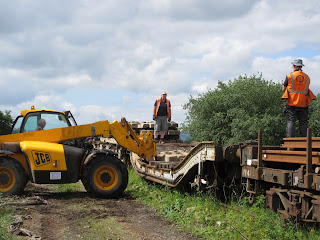 We're using 25 sleepers per length of rail, and we had a supply of 134 on the two wagons you can see. There are always a few with bent hoops that escape detection, despite the vigilance of the two gangers on top, so it's good to have a reserve.

Here Alan is using the Telehandler to tease out another load of 4, which later became an ambitious load of 8 - the result of practice making perfect. 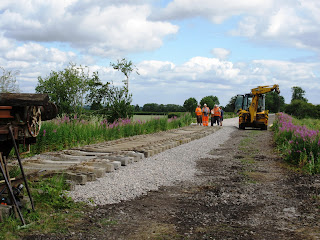 After a while a rather pleasing row of perfectly spaced sleepers lies there for admiration. We're proud of our work !

Thoughts then turn to placing the first rail on them. 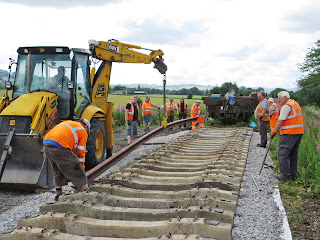 The first rail on the extension to Broadway is then dropped in ! The whole gang enjoys this special moment. Two miles still to go. 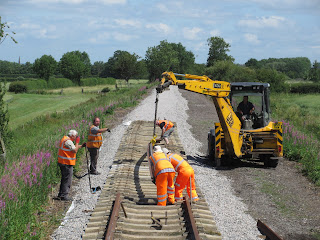 Here is the second length going in. If you get the sleepers exactly in line, the rail drops in perfectly, with an all round sigh of relief. Often though, there is a 'bad boy' among them, now which one is holding everything up?

A few words on method. The extension will be built in continuously welded rail, with the next expansion joint (or 'breather') not occurring until the Childswickham Road bridge. The rail now being placed is therefore in a preliminary fixing position, just using the SHC clips, but not the 'biscuits' nor the pads underneath. The rail joints have no fishplate holes, and will be welded, then stretched, then ballasted, and then properly fixed down with the complete set of fixings. So no thoughts of railcar shuttles up and down the bit we have just laid, it's temporary track for a while still. 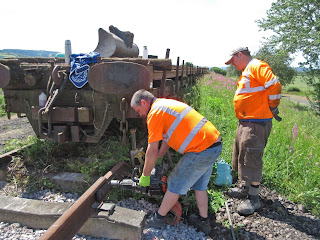 The first joint is also temporary, as it occurs between two sizes of rails. Once the first 800m of extension are laid, and indeed the contractors have finished with repairing the small slip and culvert, we will return to swap the 200m or so of headshunt with the higher weight new rail, the lower weight being earmarked for the station area in Broadway, together with the Laverton loop points. 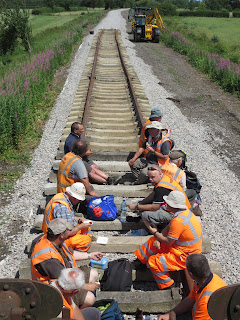 Then it was lunch time, and we had laid three lengths, just two to go.

A panel of newly laid track is ideal for sitting on face to face, for a good chat.

Here you can see the entire team today.

A big omission today was Mrs. B's exceedingly good cake, caused by a very recent return from holiday. OK, just this once then. But they are lovely, something to look forward to after working all morning without a break. 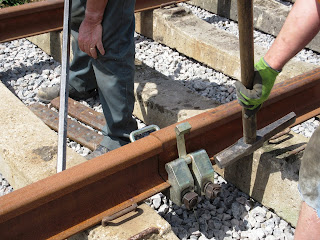 After lunch, a small group split off to fix the rails together, using these special clamps instead of fishplates. They will be replaced by a weld here indue course. 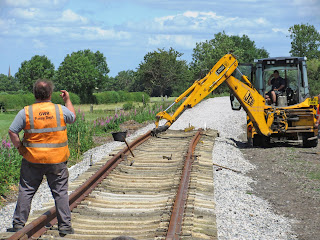 It also became apparent that, while the sleepers were in line to allow the rails to dropped in, the new railway line wasn't quite going off in the required direction. This can best be corrected once everything is plated up, and the JCB is able to move the whole track. Nigel gives instructions inch by inch. If only Steve was listening, but he's on the phone. Is that strictly legal? 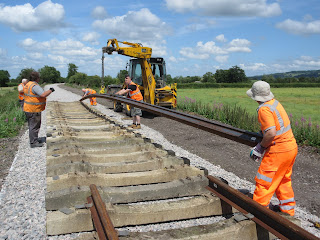 Then the final panel is built. At the end of this track laying session, we were about half way down the straight leading to the curve at Little Buckland. There will now be a pause in track laying, while the contractors handling the slip and culvert occupy the site, and our PWay train is blocked from going to get more materials.

The reward for this day's hard work was a round of ice cold beers on the platform at Winchcombe, followed by a 'track inspection' behind the class 20, on the cushions. Yes, we like to enjoy a ride on our own efforts, you can proudly say: I helped to build that.

We expect the next track laying session in around mid - August. Further ballast fettling and fencing will continue behind the scenes in the meantime.