Slowly but surely the extension work is gathering pace. The lizzards have been carefully removed from their lodgings in the former gallops, and today the PWay gang was out at Laverton in order to take out three track panels so that work can start on correcting a small slip at the start of the extension. The slip is not very exciting to see - just an irregularity in the greenery really - but it has been spotted and will be corrected by contractors in the next few days. 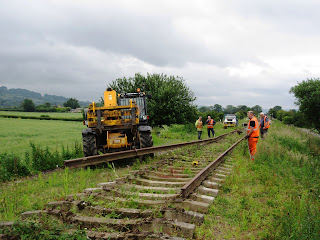 As part of the Laverton loop, there is a headshunt of a few 100m for the storage of PWay wagons - you may have seen them from the Broadway road. To allow contractors access to the slip, 60m of track previously roughly laid was taken apart with the Telehandler and stacked. 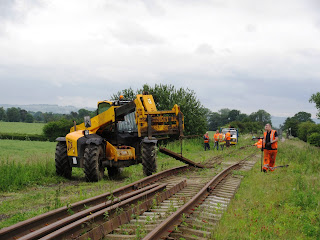 Did you know a telehandler could go along sideways? It's called 'crabbing' and proved very useful in dragging the rails out of the way from the side, but in a straight line. Nigel proved expert at this. 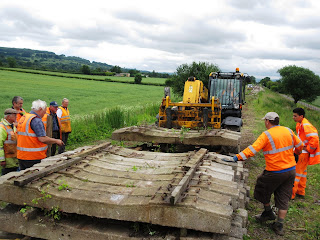 Once the rails were off, the Telehandler was able to get at the sleepers, which were all stacked at one end, ready for relaying once the contractors have finished. The contractors will also be effecting a sizeable drain repair a little further along, where a small stream runs under the embankment and the ends of the little tunnel need rebuilding. 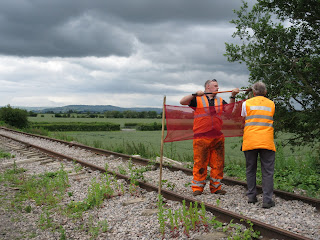 Given that the headshunt is now interupted, a temporary stop sign was put up by Andy and Ivor. Careful with that keying hammer, Andy !
In the background menacing clouds are drawing in. If you can see Cleeve Hill, it's going to rain. We could see Cleeve Hill.... 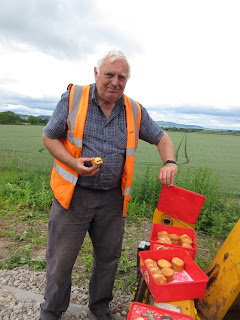 Then a quick lunch while it was still dry. Lunch with the Pway gang is always a pleasure, as they often pull something interesting out of the hat. Today it was two tins of Mrs. B's most excellent Lemon Drizzle cake.

Neil was happy to be test pilot for the formal tasting. They passed. 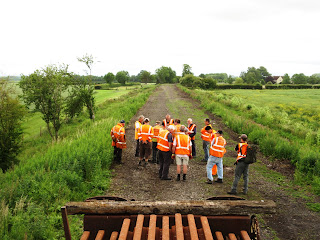 After lunch Stevie Warren came down and there was a most useful discussion about the next few days, followed by a track walk to the end of the first track laying phase, Little Buckland bridge. With our current and initial supply of rails, we should be able to get to just beyond this bridge. (Bridge 5 in the prospectus)

The view above also shows how the embankment north of Laverton has been cleared along the sides, and more recently, the trackbed itself along the top. The cleared trackbed now extends all the way to Little Buckland, while shrubbery around the curve, in the distance, still remains to be cleared. This job is earmarked for after the summer holidays, but is not critical to track laying. So basically the trackbed is ready to go, once the slip and culvert repair are complete. 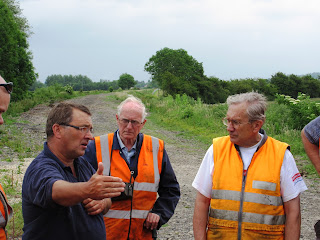 Further along at Little Buckland bridge Stevie Warren and Ivor Dixon on the photo discuss how much ballast is needed and where, the approaches to the bridge still being a bit low after the bridge repair works.

The curve round to Peasebrook Farm (bridge 4) in the background is also clear, and has most recently been receiving some attention in the form of new fencing.

The latest news is that some ballast is coming Wednesday, and will be dropped on rolls of Terram, starting beyond the headshunt.  Rolling the Terram out in this windy location could be tricky, so hands will be needed to hold it down. Pencil the date in your diary if you think you can help - Nigel will be confirming via the usual channels.