Ballast started to arrive today in larger volumes, but it seems to have been a bit of a 'dawn raid' and by 9am today's supply had already been delivered on site. Note to self: get up earlier ! 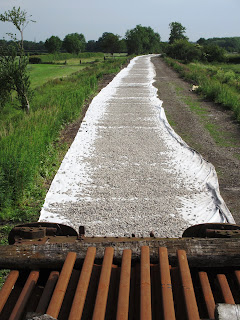 Yesterday's comment that an extra 100m of Terram had been laid was true, what a dedicated team!

The initial run now stretches away out of sight, into the start of the curve. It's all been weighed down by an initial thin covering of new ballast, to keep it in place. 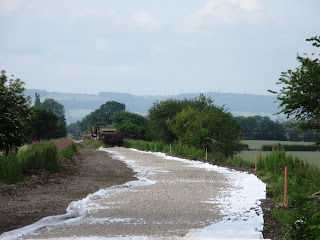 Looking back the other way, the Terram stretches back to the end of the headshunt, with a line of levels to the right to guide the digger driver about the heights required. 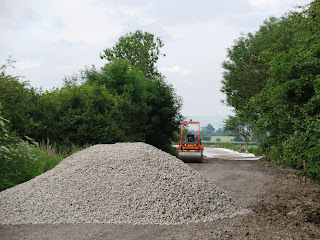 This was the end of the works this morning, with a pile of freshly delivered ballast ready to be spread out along the line of the future track. It's much longer than it looks, this is a telephoto shot. 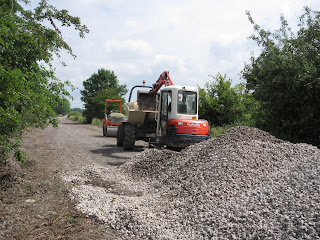 As the lorries were unable to deliver all the way down to the railhead, this intermediate pile was made, from which our dumper ferried the stuff down to where it was needed. At least this way, we can spread it in a more measured way, rather than all 20 tons at once. With all the levels needing checking, hand measurement of the first layer and subsequent adjustments, large volumes all at once would not really have been practical anyway. 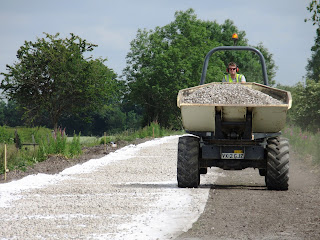 Then, off we go. Tom drives the first dumper load, in an impressive 6 tonner. 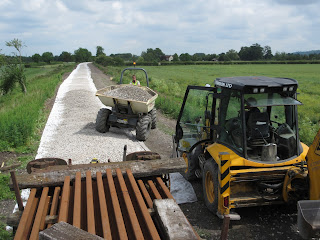 At the railhead, Steve was waiting with the JCB to give instruction, and to spread out each load. 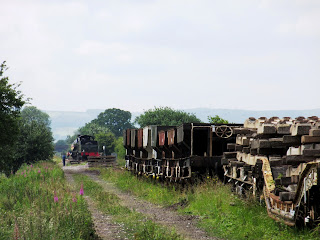 In the background, normal services were continuing. It's nice to see a service train in Laverton loop, this one being headed by 2807. Looking at the Flag & Whistle and the car park at Toddington yesterday, we are doing well, so here's hoping it generates a nice cash flow for our extension pot. 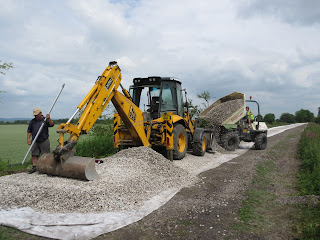 As Steve checks whether he has got the first bit to the right depth, Tom is already bringing the next load and dumping it a bit further along. The trackbed undulates a little bit and here and there there are also high spots difficult to remove, so it takes careful measurement to get at least a minimum depth under everything for the tamper to work on. There was a lot of walking about and measuring this morning, before we actually started on the job. 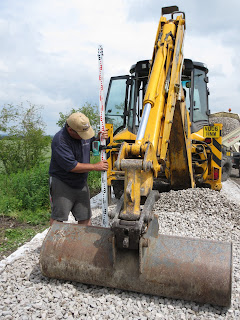 Due to a meeting in the afternoon your blogger was unable to stay on, so this was the situation at lunch time.

The important bit is to get the beginning set up right, after which the JCB, equipped with the reflector from the laser level, can get on with the job.

The ballasting will continue on Friday and into next week, when a further update will be possible. So far, so brilliant! Well done Steve, Adam and Tom.

Can I ask people posting comments to keep them friendly and helpful, and not post criticism, and certainly not anonymously. These guys know what they are doing, and would appreciate our support.

See you next week, and thanks for your interest.
Posted by Jo at 15:13