The first delivery of 40 rails has now been taken to Laverton and unloaded on site. This enables the bogie flat used to be returned to Toddington, ready for the second half of the total shipment. This is expected in a fortnight. 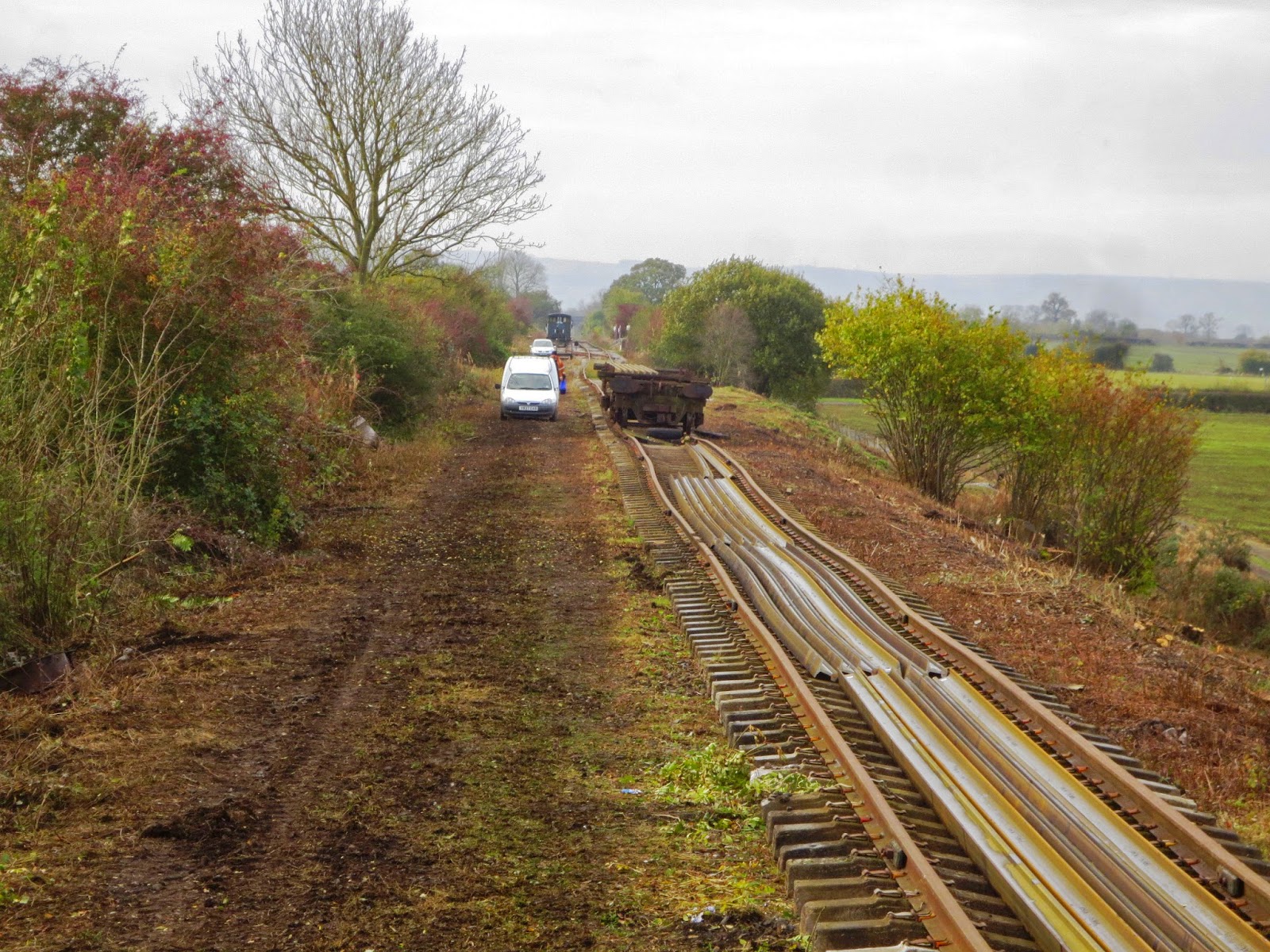 In the first picture we can see approx. 20 rails unloaded the previous day lying in the four foot, with the still half loaded bogie flat in the background. Right in the distance you can see a hopper wagon PWay train parked on Laverton loop. On the right is the embankment partially cleared. It's quite high in this area, and certainly long. In fact the majority of the line between Laverton and Broadway is on an embankment, which is why the 5 'Bridges to Broadway' are all underneath.


In these three pictures, you can see how the rail was unloaded, using a JCB. The skill demonstrated by our contractor Steve never ceases to amaze, which is why some of us refer to him as 'Stevie Wonder'. He has done this many times before, and knows the railway better than most. After all these compliments, we hope his hat still fits!

Once the unloading had been completed, Steve returned to the job in hand, which was to clear the trackbed of surface greenery and contaminated ballast. In the foreground Nigel and Dave stand by the actual rail head itself. This section was laid to works train standard only when the loop was built, and will be re-visited to reach the required running line standard in due course. It represents a length of approximately 300m. The new rails, still to be laid, represent a length of 800m, so Little Buckland bridge will be reached after approximately an initial 1100m of extension. What the rail head looked like a year ago you can see in this picture below:
All this greenery is being taken away by the JCB and a PWay track gang along the top, and by our clearance dept. along the sides.


In this view, we are looking from the bogie flat towards the railhead, which is located where the JCB is standing. The last few yards still have to be cleared of grass. Beyond the JCB lies a further straight stretch, followed by a long curve to the right which leads to a straight commencing at Little Buckland bridge, the current target for track laying.

If you stand at Little Buckland, you can just about make out Broadway goods shed in the distance! Current thinking is that we will reach this in three lots of track laying, of which the first is in the process of preparation. It's a bit over 2 miles in all.


We have often said the the cost of reaching Broadway is £1.5m, divided into three items:

Item one is now funded, and almost complete too.  The funds for the rest are not yet in place, although the brilliant 10% surplus from the EIS share issue gave it a good start. Our GWR Trust is also busy fund raising, and the railway itself, after recovering from the Chicken Curve slip, is now also in the black and generating a certain surplus. However, this cannot all be directed at the one project (the extension) as there are many other competing priorities, such as the development of Winchcombe yard for dry carriage storage etc. Next year the funding picture will get clearer.

In the meantime, a number of readers have written in with suggestions for a map, one of which ought to be useable. It will need a bit of trial and error with MS Paint. Many thanks for your offers of help, and indeed interest! While we wait, the map in the link on the right is pretty good already, for those not familiar with the area.

The next posting should be possible when the first lot of concrete sleepers is brought on site. We already have what we need, but they need taking out of storage, sorting out, loading etc. This might take a couple of weeks.