Before the topside track clearance continues, the lineside clearance along the embankment needs to progress towards Little Buckland bridge. Fortunately there was a great turnout on Saturday, and they made good progress. If anyone else would like to join, they are very welcome, don't hesitate! You can work at your own pace, so it's not too onerous, and there are 3 ladies on the job too.

Besides a team of people cutting, dragging and burning, the lineside people also have a small flail - like a small tractor - which is excellent at munching brambles. Some of its handiwork can be seen below, in a view back towards Toddington:

This view above, taken Saturday, shows the Malvern side being cleared, and the bramble disposed of. As someone who has had a few bramble scratches in his life, I can say that this is a very satisfying sight! 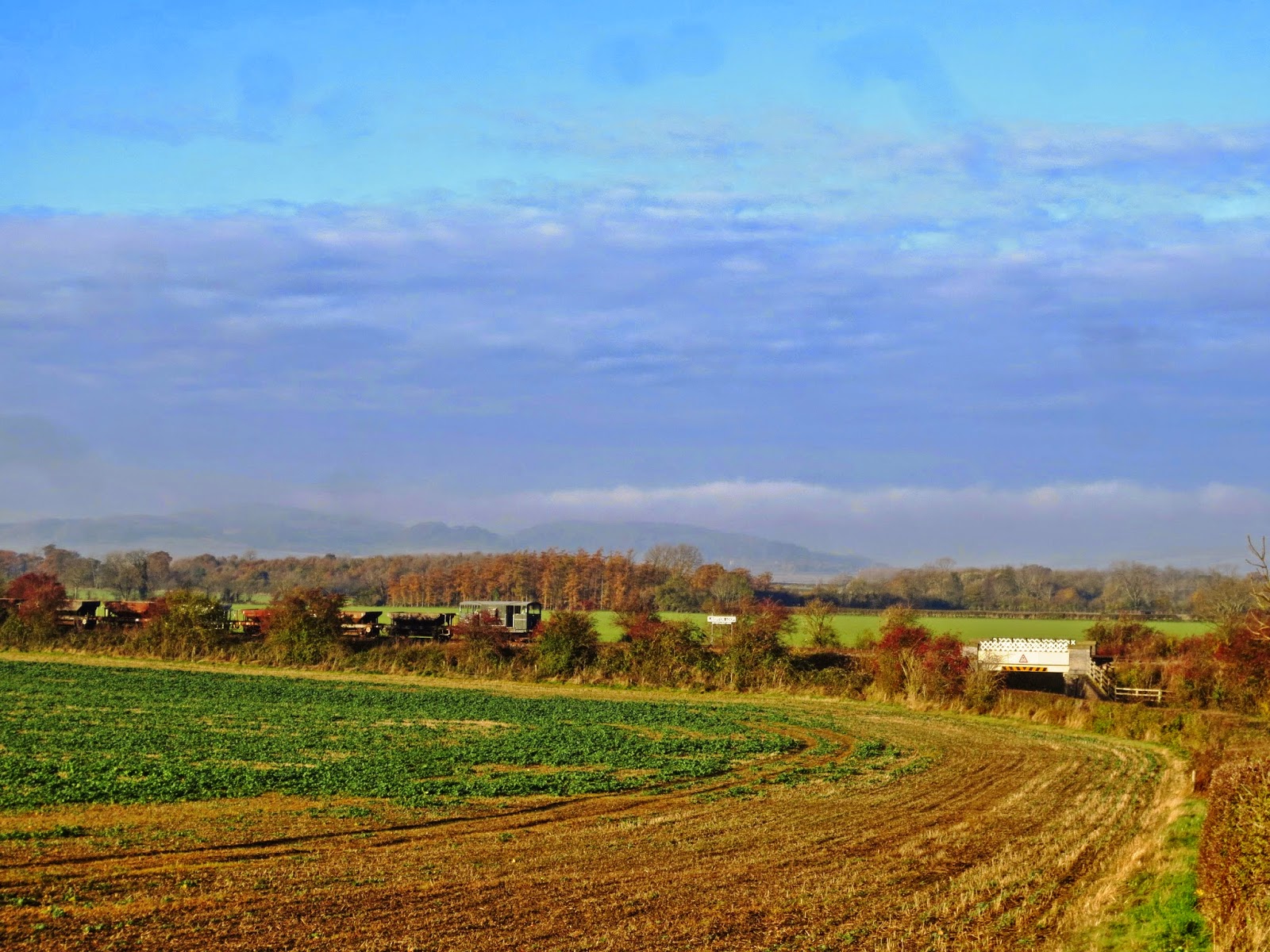 This morning your scribe went to Laverton and just short of the bridge found this view - a PWay train of hoppers in the loop. The countryside is very beautiful here, with the distant hills shrouded in morning mist. 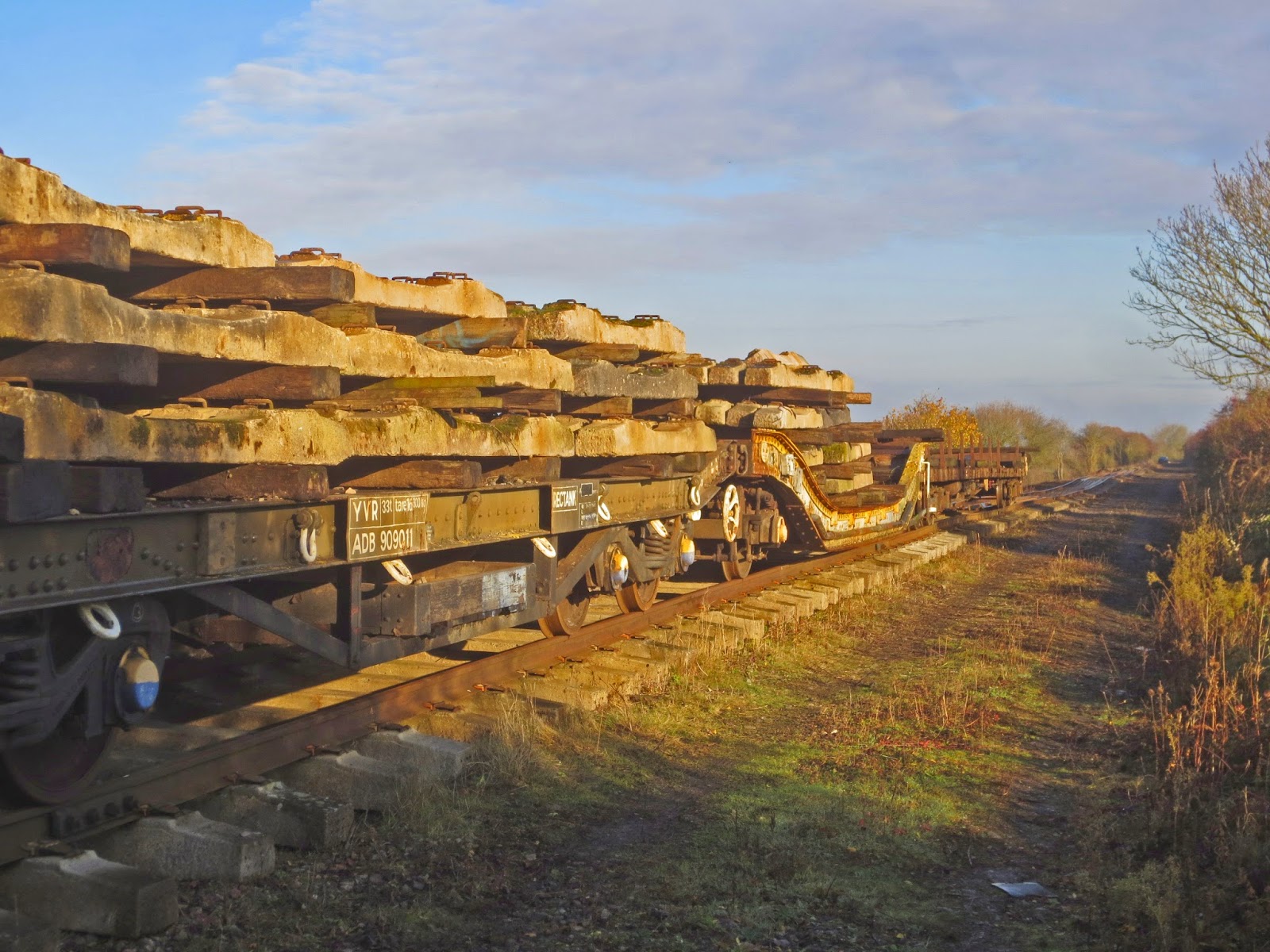 The reason I went to Laverton was because I thought I caught a glimpse of a new vehicle on the headshunt, last time I drove along the road to Toddington. And it's true - there it is, a RECTANK filled with concrete sleepers. Beyond it a well wagon with more, and the ELK used to bring the first shipment of new rail. Another is expected tomorrow, to complete the 80 rails ordered in the first round, to take us to Little Buckland.

Just up the line is the current railhead, and even today there was a two man gang on clearance. 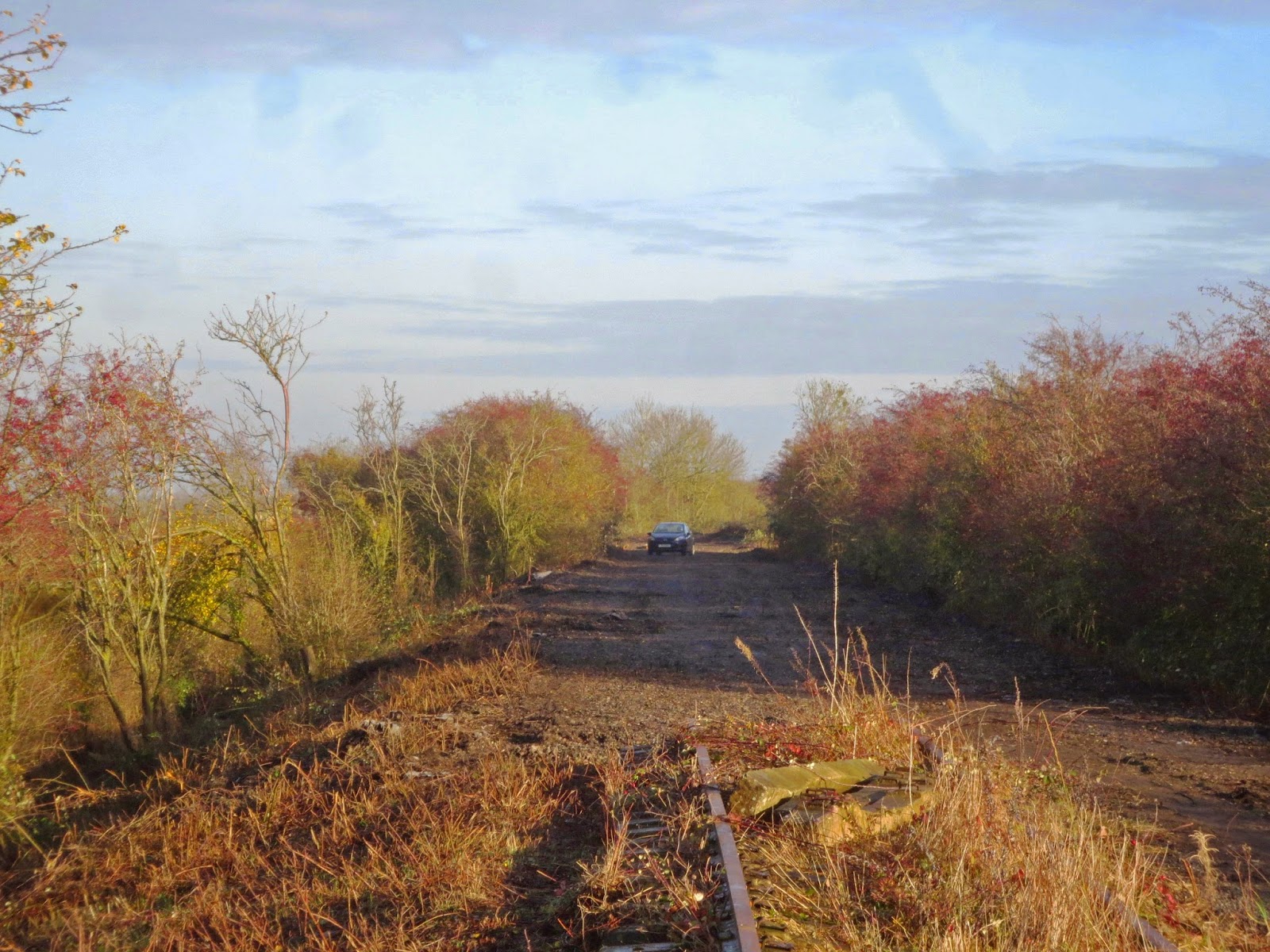 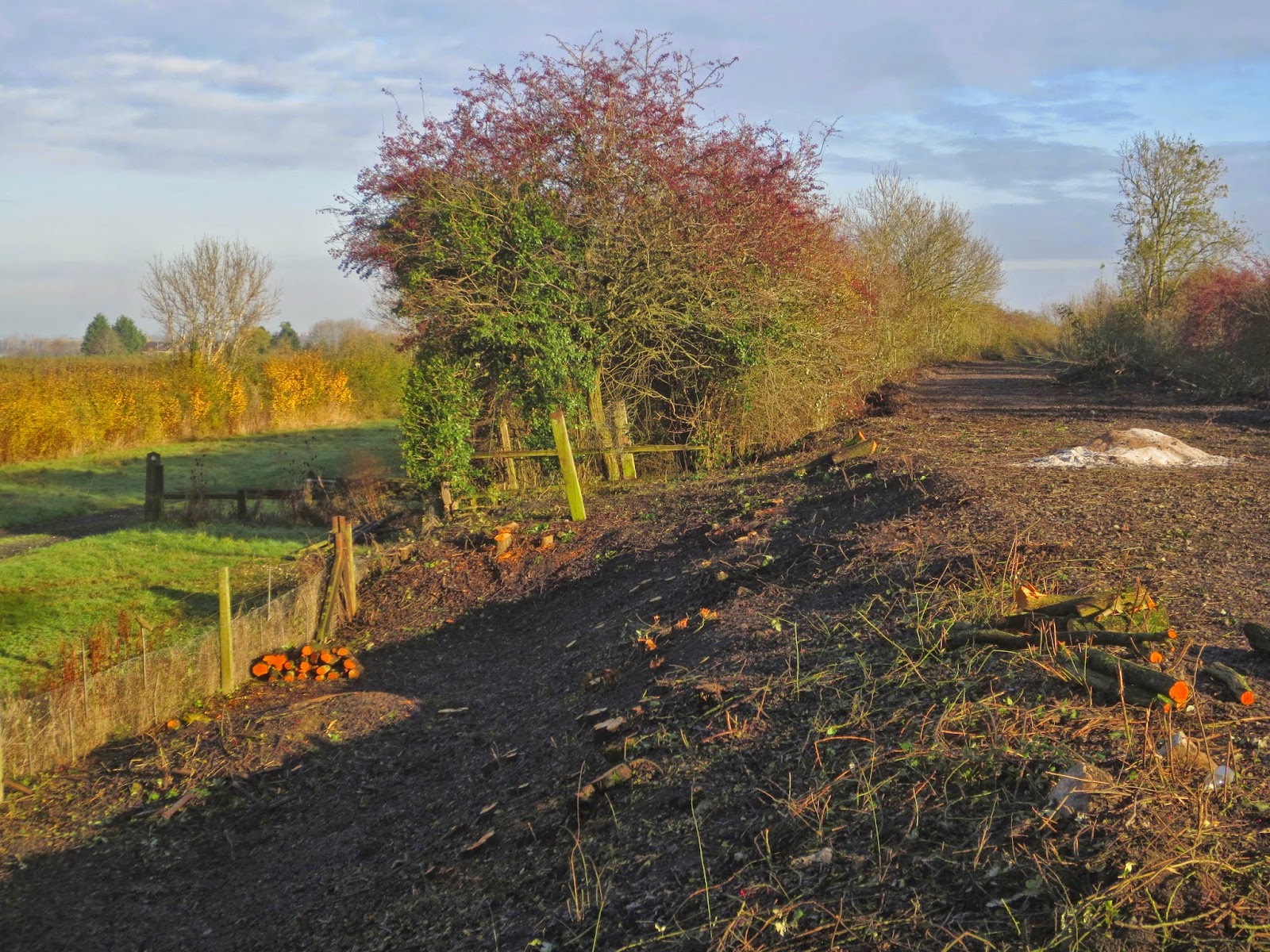 The picture above shows the point reached on Saturday, a foot crossing at the start of the curve towards the bridge. The Cotswolds side of the embankment has not yet been done, but a start was made on Saturday, and they will be working back towards Laverton loop. This will open out the view of the hills, which, as a passenger, is one of the big draws of our line.

A little further down the line we saw Stevie Warren unloading a second ELK of old Bullhead rail. With the two vehicles the loading on Wednesday will be easier, and the rail can stay on board for the foreseeable future. 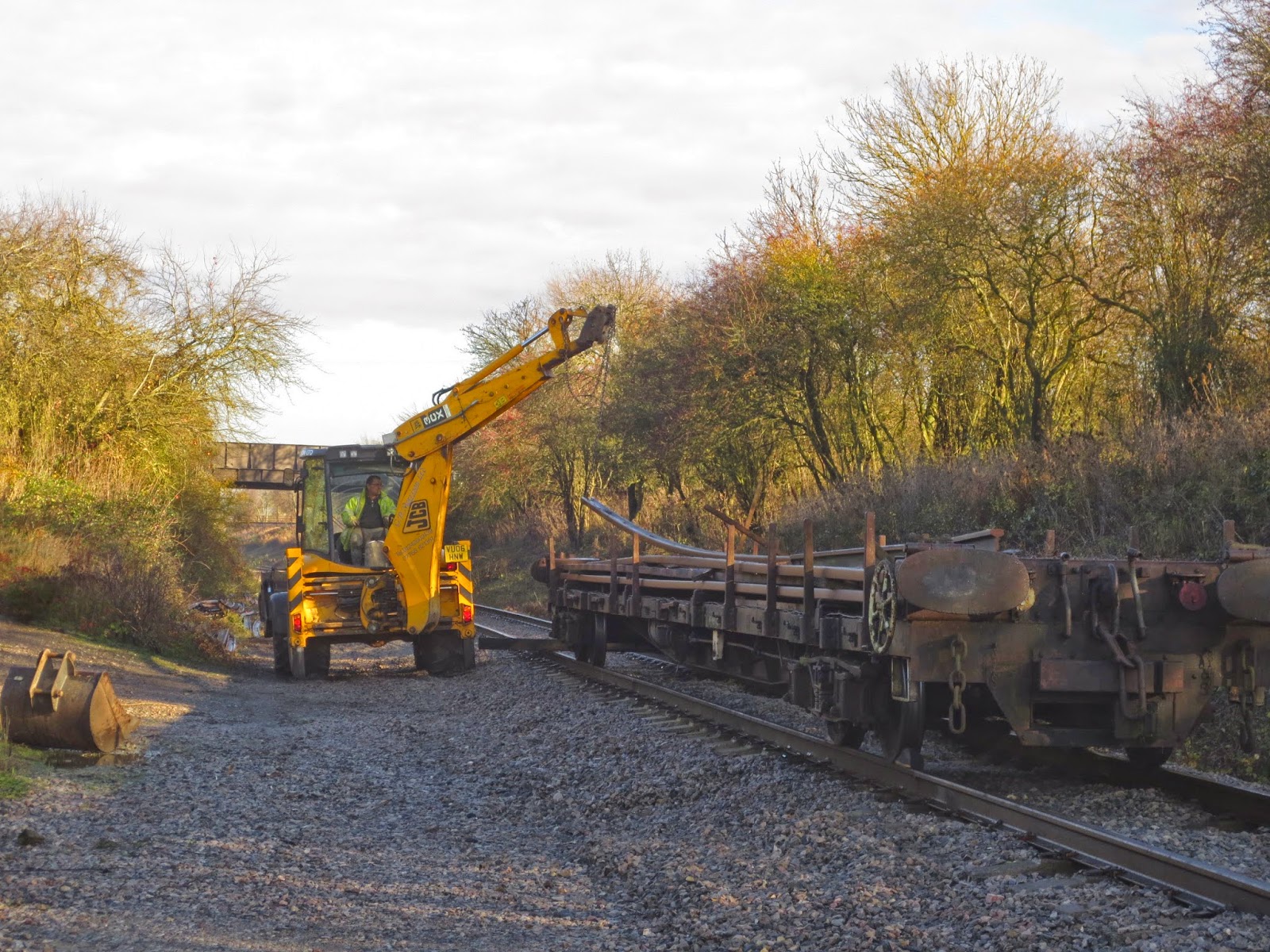 Steve is now occupied with the replacement of the user crossing at CRC, but will return to the extension in a month or so to complete the track level clearance to Little Buckland. If time permits, more concrete sleepers can also be brought up - this is a fill in job, not so urgent, but there are lots of them to come!

In summary therefore, this is the order of play:

A second stretch can then be considered, later in 2015. Completion to Broadway will need further funding! Luckily our wallets will get a year's respite. I must say, it was rather satisfying to contribute to the Bridges EIS scheme, and then get money back from the government.