After the euphoria of opening day yesterday, the plucky PWay team were back at hard, physical work today, in the pouring rain that readers will not fail to have noticed. We tried to draw out the tea drinking session at the start as much as possible, even having a second cup, but sooner or later we were going to have to face it. 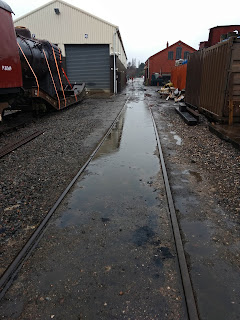 Out of the mess coach, and into the puddle, which stretched most of the way up to the yard gate. 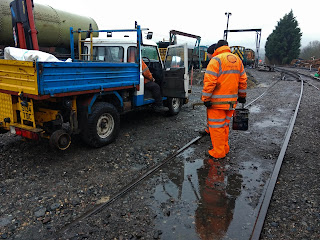 It wasn't a good beginning, and worse was to follow, as the Landie could not be started. Of course you find this out only once you have loaded it up with the tools for the day.

Dave is inside and trying out a variety of tweaks and fiddles with the key, as it's something to do with the barrel of the ignition. Neal waits hopefully with a bucket of grease (Just how hopeful were you with that grease, Neil?)

Eventually it did spring to life, and we have no idea how/why it did that. It's just an accidental correct twiddle with the ignition key. Once it has started, it works fine, even later on. Mysterious.

The next difficulty of the day was a puncture on the JCB, and because it was Easter, there was no chance of getting it repaired in a hurry. We made do with the Telehandler. 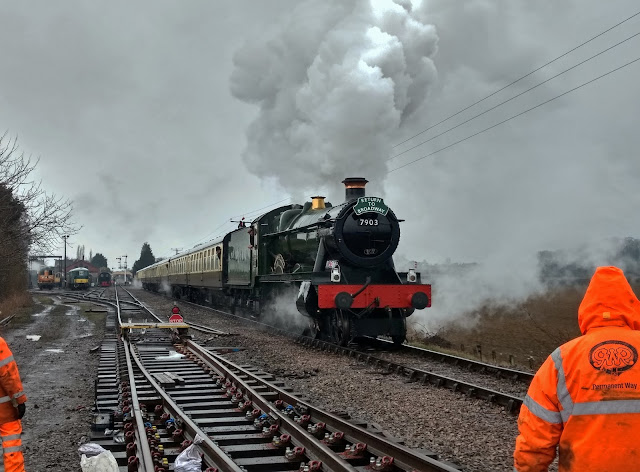 Out on site at the yard throat we had to step aside almost immediately as Foremarke Hall accelerated by. The weather was foul and the carriages largely empty. 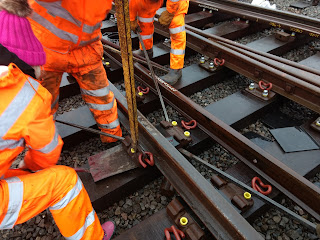 To warm ourselves up (it was 4 degrees C) we had a little clip up session on the straight road leading to the headshunt siding.

These baseplates, extra wide so that they can hold a check rail, were tricky to clip up and needed 3 men on bars to offer them up to the rail, here floating about one inch above the timber. 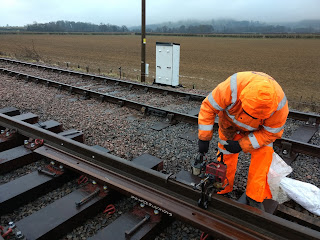 Meanwhile Neil was busy with the drill fitting the straight rail on the other side with holes through which the check rail is bolted. The two check rails, left and right of the crossing in the middle, make sure that the flanges passing over the crossing don't stray into unintended territory. 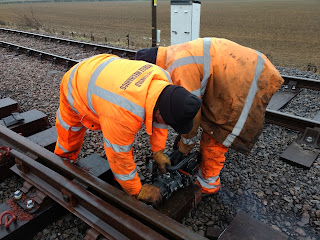 With the holes for the check rail drilled, the bolts inserted and hand tightened, it was time to start the 'animal' to really get them screwed in tight.

That was the next difficulty of the day, as we pulled and pulled at it and tried all sorts of combinations of kill switch, petrol tap and choke but the cursed thing wouldn't start. And then, suddenly, it did. Again, we were clueless as to why not for so long, and then suddenly it ran. 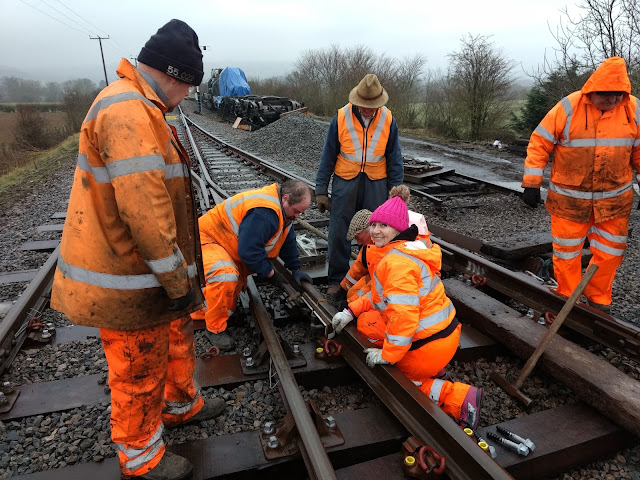 Here is a group pow-wow around an insulated fishplate. The second new turnout needs insulating from the first, so we use a kind of plastic lined fishplate for that. Exciting stuff, if some may be believed. 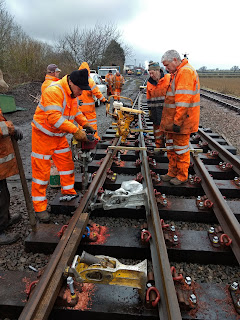 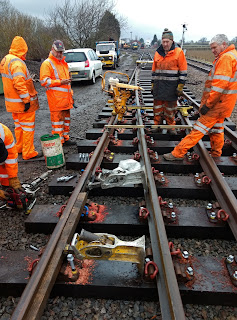 We also had a jolly time with this track gauge, the gold coloured bar lying across the rails. We measured the 1435mm gauge on the straight road leading to the headshunt, jacked it over a few mm to get the distance right, then drilled down.
When we checked the result after screwing doewn, the distance had changed! It turned out that our track gauge is somewhat elderly, and hence a bit unreliable. Luckily we were able to redress the mm lost be redrilling one or two holes, and taking up some slack where the rails were attached to the base plates. All not as bad as it seemed, again a case where years of experience showed what to do when you think you had it wrong. 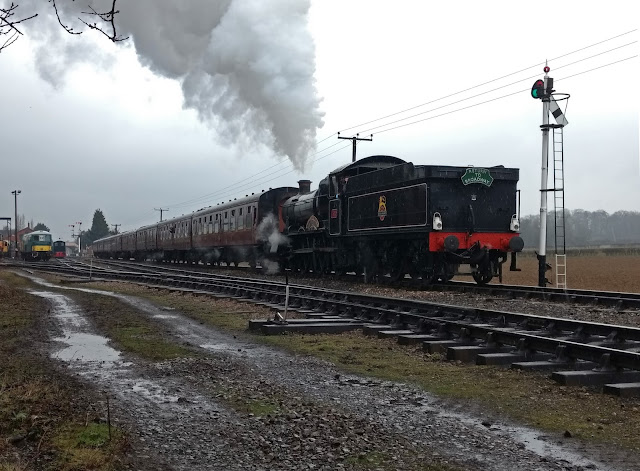 After the first, mostly empty train the following ones looked rather better, with at least one we observed having a face at every window - that's more like it. 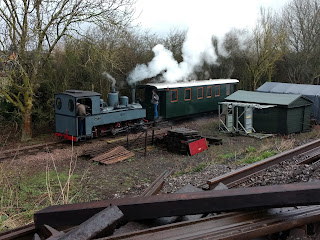 Below us a South African style chime whistle (on a German loco) told us that the narrow gauge line was active, which was nice to see. 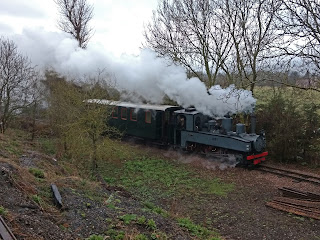 On the way back the little Feldbahn engine chugged along nicely with its passengers in tow. Later, just like the big railway, they changed to diesel haulage for the final trains of the day. 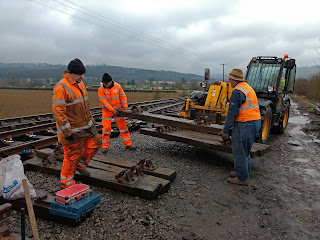 Just before lunch Stevie arrived from Winchcombe, where he had been loading some second hand sleepers.
He brought with him some useable ones for us, still with the GWR throughbolt chairs on them. These are for the headshunt connection, which will go in on the left here. David and Richard flung them off the forks, before we left for lunch a short walk away. 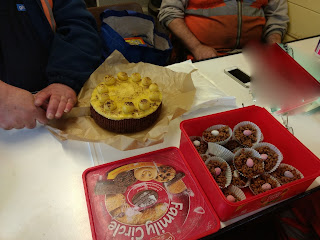 As it was Easter, Mrs. B made us a special cake (she spoils us) which had a thick layer of marzipan and 11 marzipan balls on top. The 11 seemed an odd number, and indeed it caused a little trouble as we were more than that, but some were willing to share a ball, or go without. 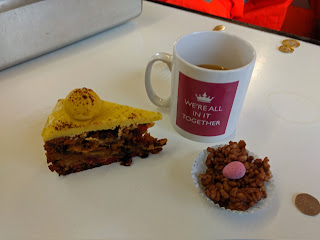 Mrs. Blogger explained the cake - it was a Simnel cake, and the 11 balls represent the 12 apostles, less one, being Judas, the traitor. Well, it still tasted great! Just in case there wasn't enough cake, we also had a box of fairy cakes made of chocolate rice crispies, each with an Easter egg on top. They went down seamlessly too. You soon forget the rain like this.


After more tea, a little excursion to Winchcombe to get a spare part for the insulated fishplate, and we had the chance to record Dinmore Manor pausing here, with steam heat on. 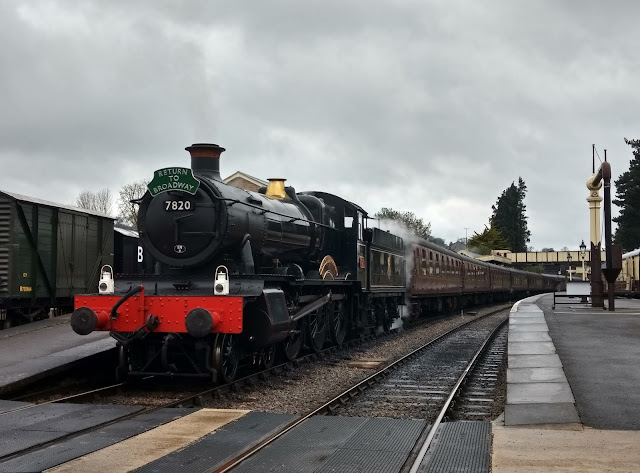 Now that we are running three trains, they no longer cross at Winchcombe, but at Toddington, and Gotherington. Winchcombe is a little quieter now. 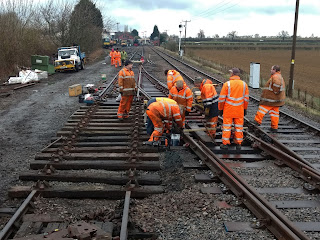 When we got back to the turnouts at Toddington, those sleepers were all laid in and suddenly the whole set looked nearly finished. 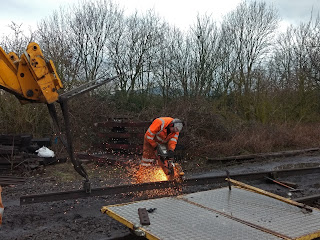 Chris was already busy cutting the closure rail for the last bit to the correct length (we hoped). 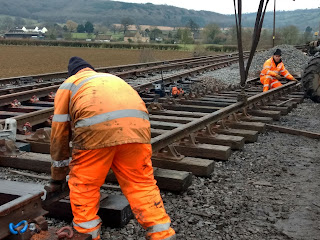 Then the newly cut rail was lifted in. This bit is back to bullhead, all second hand stuff which costs us nothing, as it leads only to a little used siding. 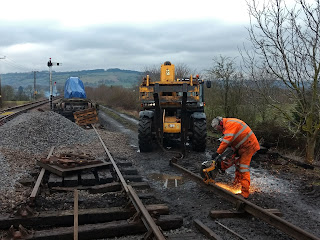 Then Chris cut the second rail, for the LH side here, also to the correct length (we hoped). 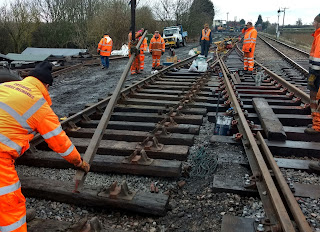 Without further ado the second rail was lifted in, and, hey presto, all the rails in these two turnouts were in their place. 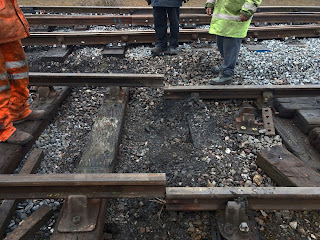 Well, high four-and-a-half, as one rail wasn't measured so exactly after all, and was a few (but vital) mm too long. There's also still a question of a small height difference.

But we were uncowed, it's only a small difference, with a bit of welly you should be able to shunt straight over that, no trouble. Surely. 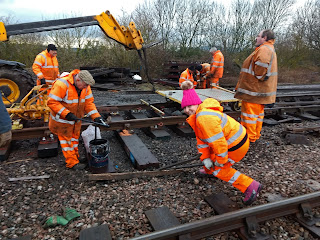 Behind us the final timbers were being drilled, and for this you need a bar, a lot of enthusiasm, and some weight comes in useful too. It certainly seems to be fun. 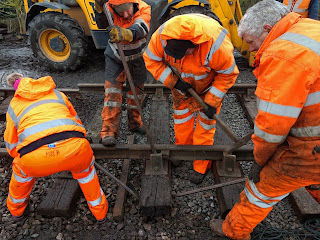 At the southern end the rail was high but the sleepers were low, so it took 3 people on bars to hold the chair in place so that Neil could knock the key in. 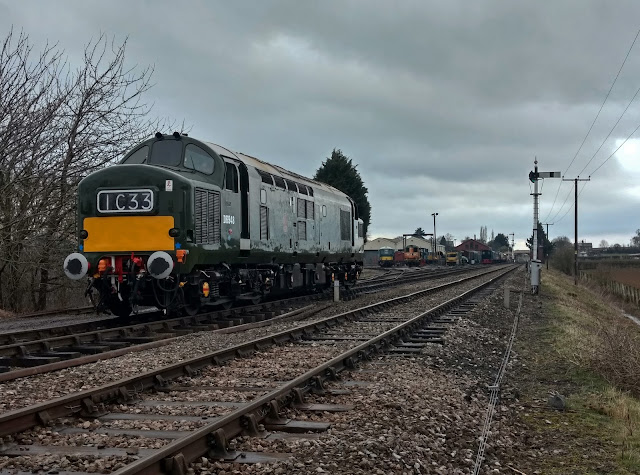 As readers may recall, the short stretch of plain track between the yard throat and the start of the new pointwork was shortened by us by 6 feet, and we wondered if the crew of P&O knew that. Well, P&O did just about fit, so today a new attempt was made, this time by two diesel locomotives at once, the class 45 and the ED. That one came down as a FAIL, as the last two axles of the last loco didn't clear the turnout behind them. Even by pushing our PWay trolley along a bit.

Later in the day, a new attempt was made, this time by a single diesel locomotive - that was a PASS. The green Growler is on its way off shed to take over the last train of the day. 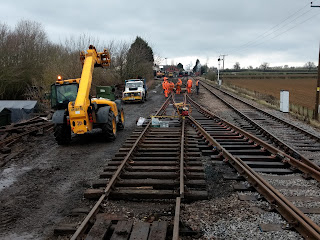 Here's the view from the top of the ballast pile of the turnout pair as it now stands. Almost finished, we think. 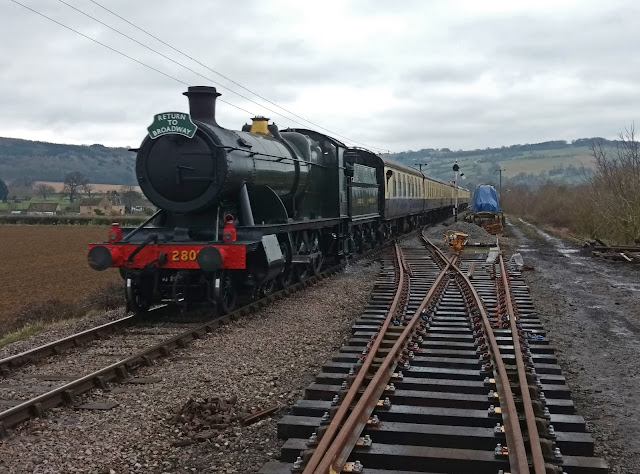 Looking the other way it also seems complete, and you get a free view of a passing train into the bargain, this time of the third steamer of the day, 2807.

What's still to do then?

- One check rail to fit
- connection to the headshunt, with correction of levels
- a few minor jobs on the snagging list, and... 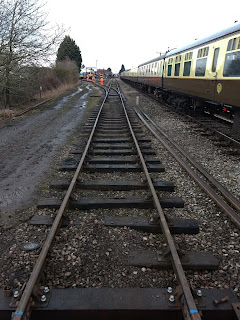 ... a partial resleepering of this stretch of plain track leading to the yard throat, which is half built in concrete, and half in (poor quality) wooden sleepers.

As it happens there are 10 concrete sleepers with chairs in the loco yard, and this is just perfect to resleeper the few yards in life expired wood.

Watch us do this next week then.