Back to the front

Today it was back to the front, building a turnout in the middle of running trains. Yes, the running season has started again, and we are in the thick of it at Toddington. But first to find that mess coach, where is it this time? 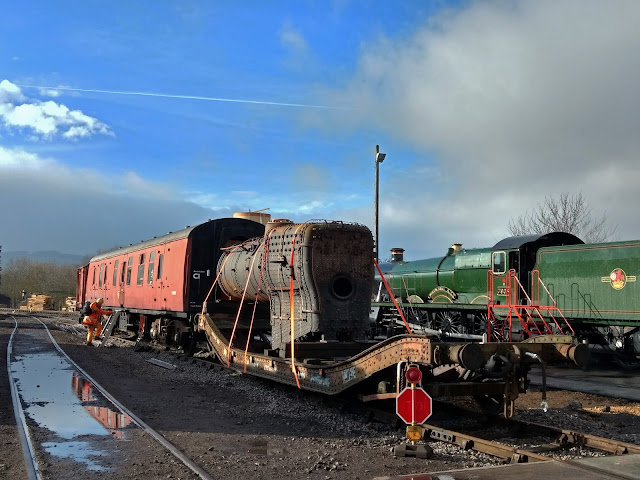 We had to walk a bit longer this time, it was in front of the loco shed again, paired with the boiler of 76077 on a well wagon. Foremarke Hall was raising steam for the day's operations (paired with a DMU service) and check out that sky in the background - the forecast said it would be showery today. Well, you can certainly see one building up there OK. 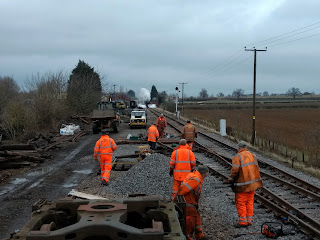 We set off for the turnout at the yard throat, and shortly after we had started work there was a developing steam cloud in the background (something like an old B&W horror film, in which an approaching steam train ran down the hero who was looking for a paper spell fluttering around in between the rails). We had lookout posted, but also kept a wary eye on the 'peg' which duly clattered 'off' and then it came. 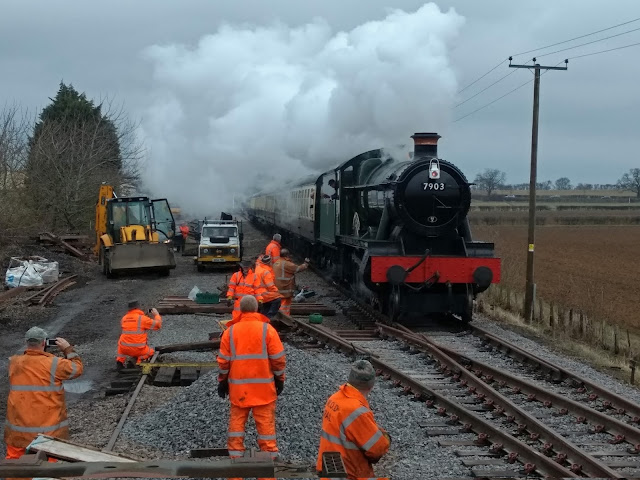 Here's Foremarke Hall with an 8 coach train, our new length. After receiving acknowledgements from the team, the loco accelerates away over the recently laid turnout in the main line. 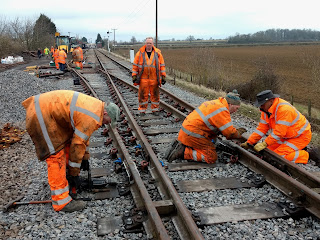 There were a number of odd jobs to do - as usual -  and one of these was to adjust these insultated fishplates fitted on Wednesday, so that they sat properly.
It was quickly done with the 'animal'. 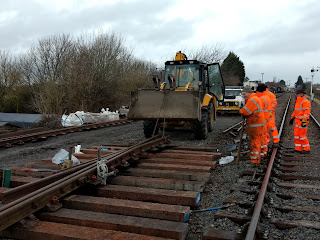 After further perusal of the diagram, it was decided the crossing part of the turnout needed to be moved north a bit.

Steve got his chains on the end and pulled. A jack in the middle made sure that the sleepers didn't get pulled along with it. 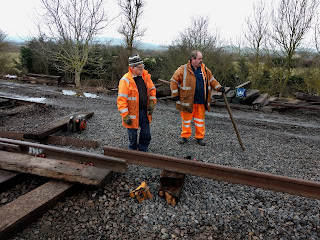 At the other end of the crossing were Mike and Nigel.

Not to worry, it was easier and more accurate to push back with Stevie's front bucket. 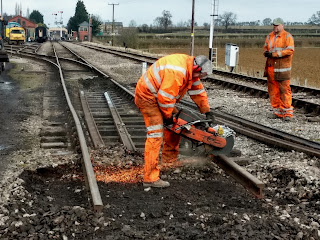 At the Toddington end of the new turnout we had to cut off 6 feet of the running rail in order to make the whole turnout fit in its space. 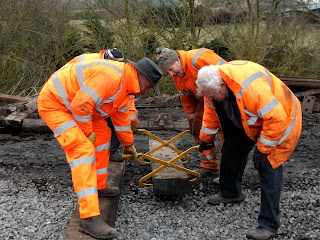 Then the first timbers were pulled into place. Hard work, it takes at least 4 people to move a timber with the nips. You grab a pair, and shout out to no one in particular, 'who wants to be my friend?'.
Don't all shout at once... 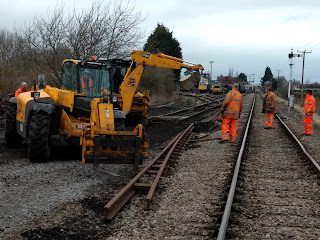 To make room for the timbers, the switch had to be moved out of the way a bit. Again a job for Steve in the JCB, he's really indispensable for this sort of work. 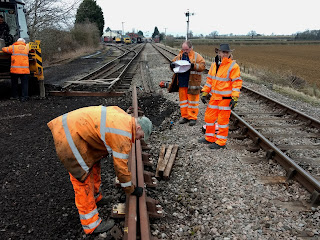 Then, while Nigel reads from the drawing, Bert Ferrule marks the rails with the lengths of the sleeper required along here. As the turnout slowly becomes wider, each timber is a bit longer than its predecessor. Complicated - where is the 3.65m timber now? 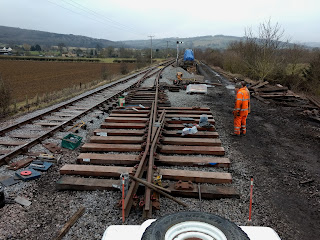 Just before lunch, this view from the 'upper deck' of the Landie shows how the second turnout is beginning to take shape. The crossing is in its place now - it's the first bit you start with - and it is fishplated up at the far end, while short sleepers have been placed in the area between the two turnouts (darker looking sleepers). 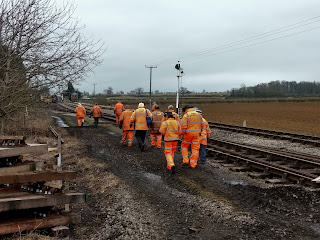 As by an unspoken word, at 12.20 the group suddenly turns round and walks back to the mess coach, not far away in the loco yard.

The signal is 'off' for the next passenger train. 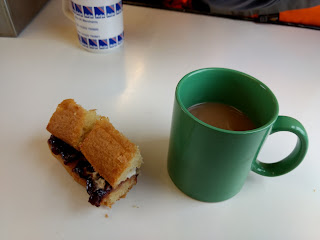 Tea in the mess coach was delicious, a nice hot and strong brew. Nigel openend the magic box, and inside was one of Mrs. Black's delicious creations. We took two slices straight away... 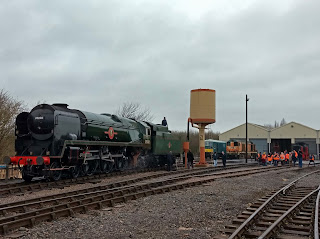 After lunch we wandered back through the loco yard, where we found 35006 in steam, being replenished from the water tower. A guided tour stood in the yard and admired.

What was P&O up to though? 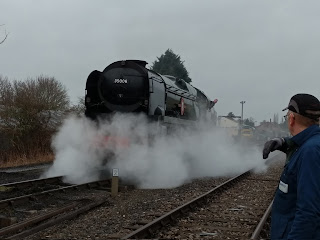 We went back to work at the turnout, when P&O came and wheezed and spluttered hot water at us, coming very close to the temporary end of the line. We wondered if the driver knew we had just shortened it by 6ft..... 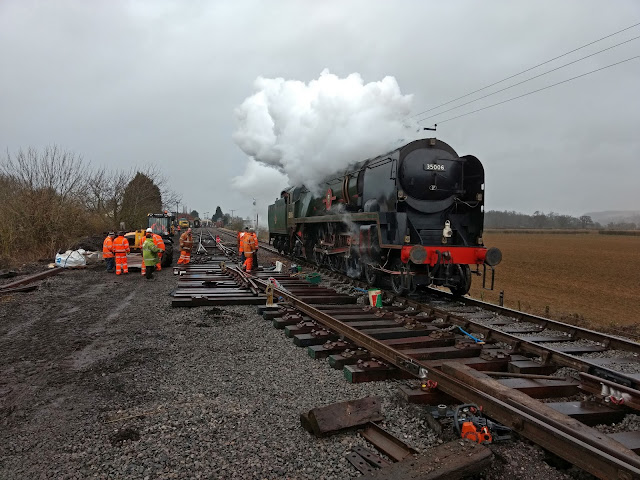 Shortly afterwards, after a reversal into the station, P&O cantered by for a run down to Winchcombe. 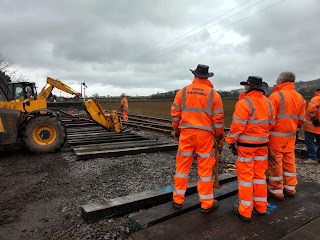 We now laid out the timbers for the switches at the Toddington end, and then Alan in the Telehandler droppeed in the first switch.

Watching this with great interest are David and Diana, two new recruits in Australian hats. 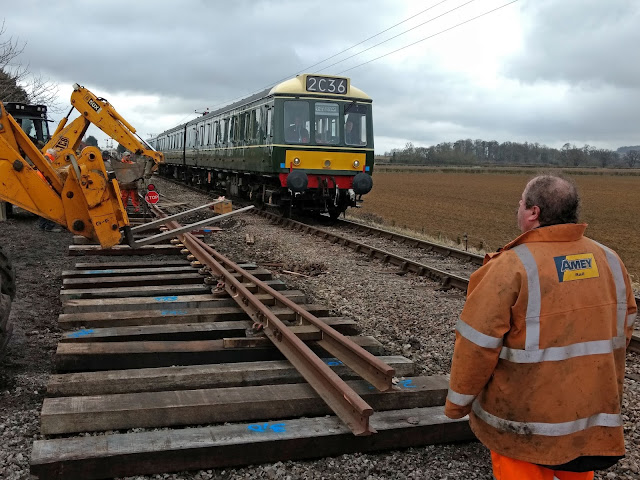 The second train today was operated by the DMU, which came by with much tooting just as we were manoeuvering the switch into its position on the right. 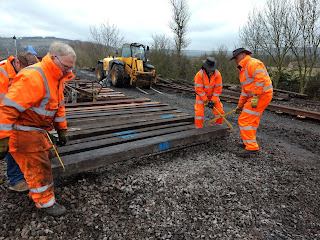 The timbers for the switch end were just dropped in a bunch at one end, so we needed a bit of muscle to move them along with the nips. 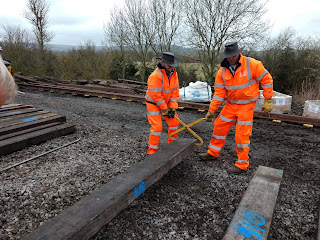 We like to drop new recruits in at the deep end, so take these nips and do your worst! They passed. 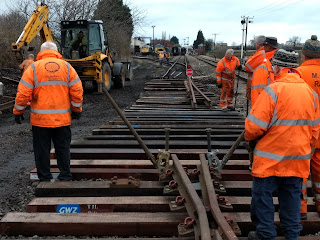 This job completed, we could now look down the line of sleepers and see the shape of the new turnout, which has one switch in it so far. 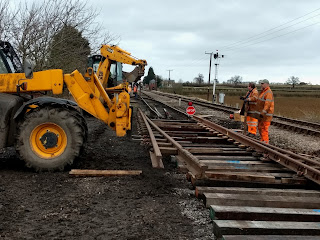 Alan then brought in the second switch, making this turnout that bit more complete. 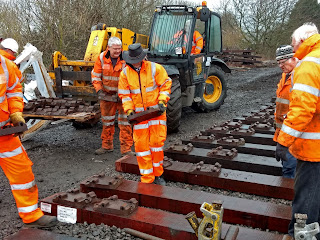 The new timbers had to be fitted with Pan 11 base plates, for which we had a vast supply in a box off camera.

Diana mentioned that she enjoyed a little weight lifting, so how about these? Just a measely 20Kg each though, the heavy ones are 60 Kg each and, as we saw today, that takes two of us. 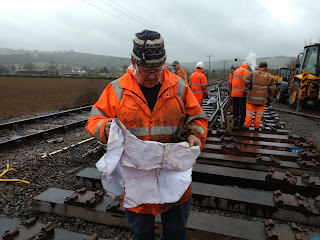 The next delicate bit is the exact positioning of all the timbers. For this Mike consults the masterplan, but as this is the fourth turnout we are building with it, it is starting to look a little battered and torn. Afterwards it took two of us to fold it back together again. 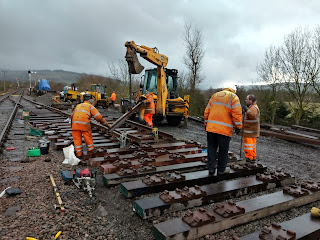 With all the timbers in their rightful places, we brought in a check rail. This goes opposite the crossing, and makes sure that the gaps in it do not derail any wheels that pass over it. 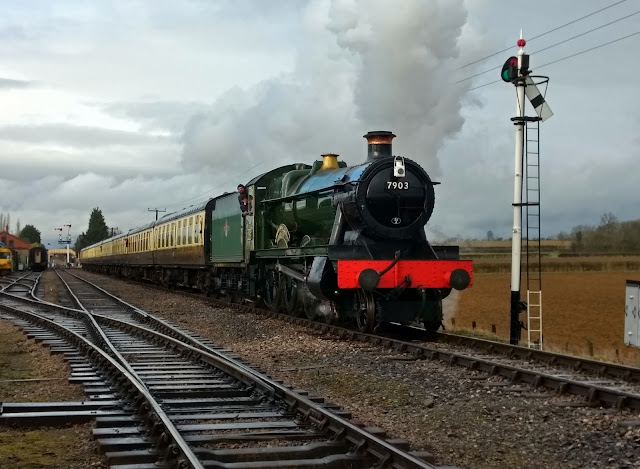 Another train of 8 coaches passes by, and what a wonderful photo opportunity you get on this job. With the advanced starter in the 'off' position, Foremarke Hall starts to get into her stride here. 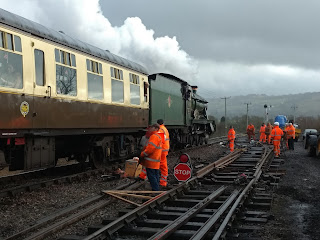 She chugs past us, as we drop tools to admire the scene.

The angry sky makes a colourful backdrop to the steam from the chimney.

In the foreground you can see where the two switches are going to be attached to the running rail leading to the loco yard. 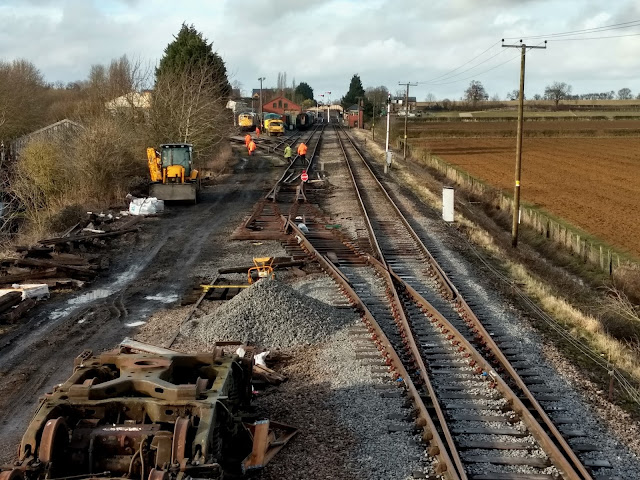 At the end of the day our 'drone' takes a look over the site. The main line turnout is in, properly ballasted and tamped.
On the left, the second turnout is taking shape, and you can start to see where everything is going to go. 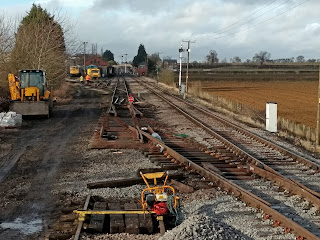 A lower down view shows the rails in the foreground that belong to the headshunt. 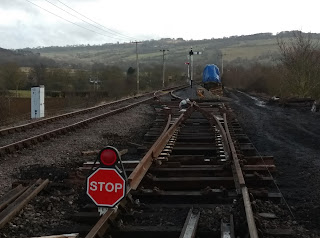 Finally, a look the other way, from just about where the front of P&O stopped after it advanced gingerly out of the yard.