The 'Beast from the East' turned into 'Hysteria from Siberia' as panic buying emptied the supermarket shelves! The resupply seems to have faltered, which meant 'holy' doughnuts this morning.

The jam in the middle of the doughnut was replaced by air this morning, this being all that Paul could find due to the empty shelves. After some protest, they still got eaten - they were doughnuts, after all.


The snow was odd. It was very shallow in some places, and very deep in others.

Despite a 9 degree temperature at the end of the afternoon, our railway still had remarkable drifts, such as this one here, spotted today near Bishops Cleeve. No problem though for a 100 ton steam locomotive. 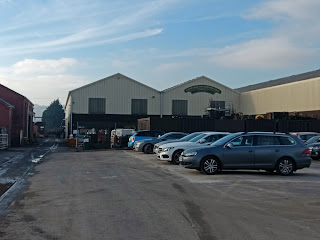 We spilled out of the mess coach after tea, to find 76077 - gone ! Completely vanished. The whole of the car park was clean too, well done those sewage contractors. We are gearing up for the first public trains again this year. 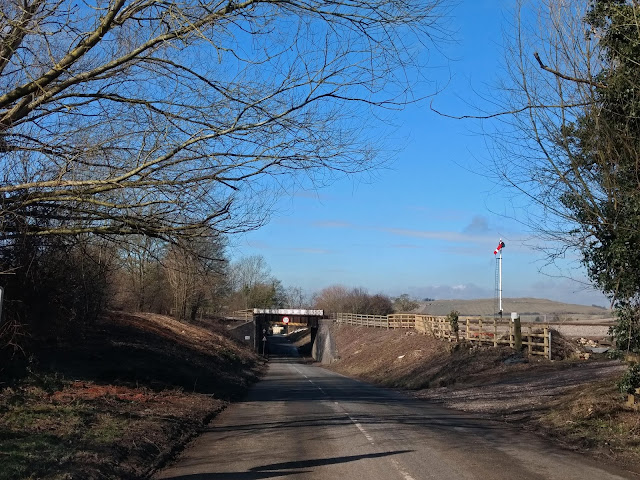 We split into three teams today. One to do some drilling on the main line turnout recently installed at the yard throat, one to go to Broadway to tweak the ballast, and one to go to Gotherington Skew Bridge, with a similar mission.
Here is a shot of the famous Skew Bridge. It's open to traffic again, and our sleeper depot, which once held 7000 concrete sleepers, is now empty, neat and tidy. 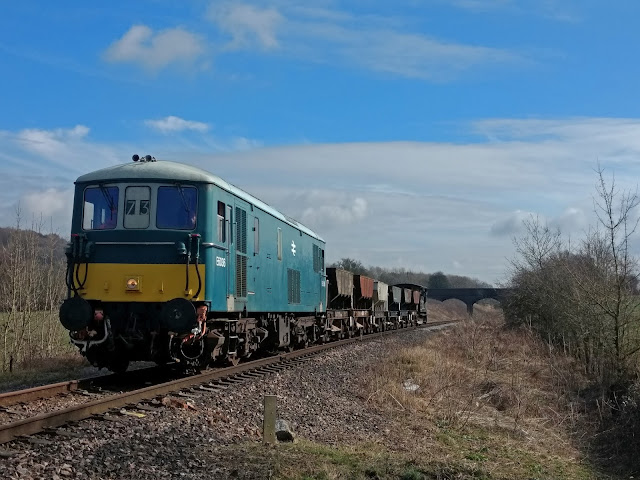 Our job was to add another Dogfish of ballast to the running line over the bridge, to fill voids left by the tamper that did the line there after its reinstallation. The ballast train still had two full Dogfish in it, and they had (we hoped) now warmed to a point where it would run out when we opened the doors. 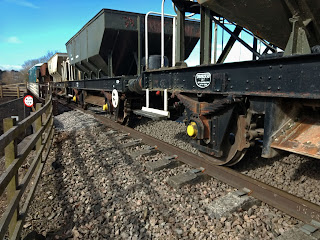 The olive green Dogfish was selected, and parked precisely so that the dump would begin after a fishplate with bonding wire on it that we did not want affected. 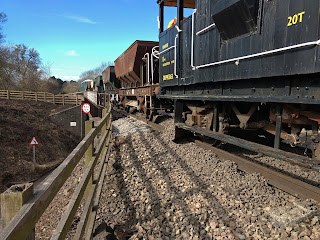 With a toot the class 73 set off slowly, leaving a trail of ballast in the four foot, which the Shark behind then spread outwards. Just perfect. 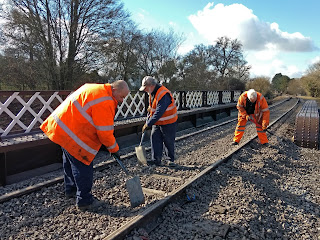 The train soon left again, this time to head for Broadway, where it was parked in the headshunt. Peace resumed over Skew Bridge again, interupted by the clang of shovels on ballast. Four of us stayed behind to complete the drop by uncovering any buried wooden sleepers, and by ensuring that the sleeper ends were well supported against lateral movement.

It's rural out there. 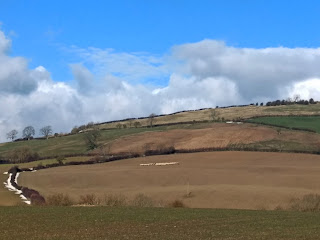 We were somewhat spellbound by the spectacle of a large flock of sheep, galloping before us hither and thither on the opposite hillsside. Several small dots could be seen running around it, until the flock was quite concentrated in the middle (accompanied by two human figures, we should add). Normally you see this on TV (One man and his dog) and here it was, unfolding before us. 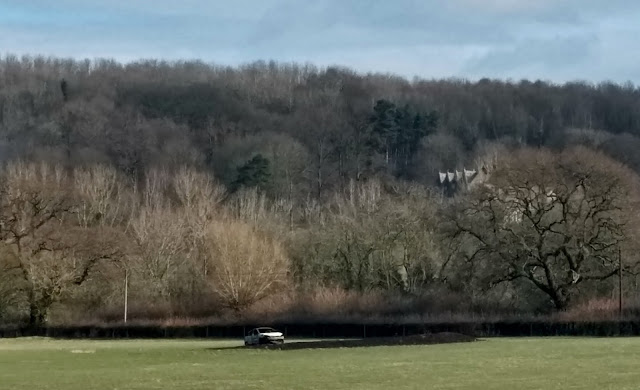 Human figures also contributed to this scene, only a few hundred yards away on the right. Centres of population are increasingly encroaching on rural England, with Bishops Cleeve marching in big steps towards its neighbour Gotherington, just behind the camera. 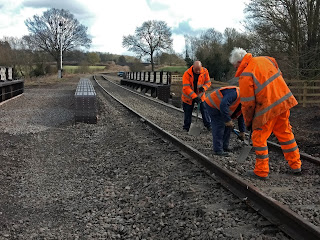 We carried on regardless, and at the end of the morning had spread the excess ballast very nicely into any voids left by the tamper, or up against the ends of the sleepers as here.

Job done as far as we could, we returned to Toddington for lunch and to meet the rest of the gang, to see what we could do next.

On the way back, we stopped at Winchcombe. 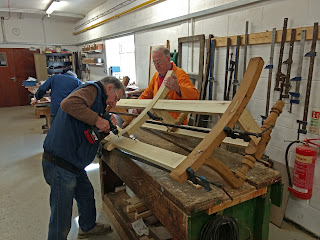 We dropped in at the ever friendly C&W shed to see how they were doing with the restoration of this padded waiting room bench for Broadway. 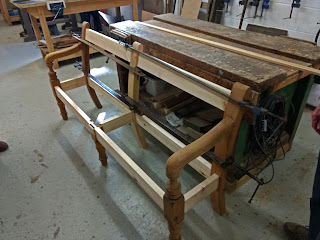 It was last used in a pub at Swindon, and came to us with only 5 legs. This was not only unauthentic, but also a concern in view of the increasing weight of some members of the public, so we were keen to have it equipped with a maximum number of legs. The carpenters at C&W are doing a wonderful job here. The old wood has been stripped of its black paint as found, ands the new will be stained to match the original and then varnished. Green vinyl has been sourced for the upholstery. 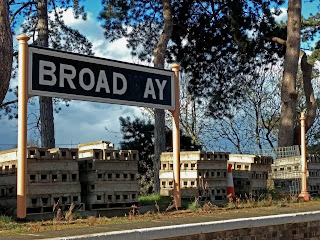 After lunch, BROAD_AY. Something not quite right here...

It seems that the 'W' made of plywood in 2013 started to delaminate. Although we have a duplicate set of cast aluminium 12'' letters, the plywood 'W' will be replaced in the first instance to get the show on the road for opening. At some time in the future when things have calmed down the full set of cast aluminium letters will be fitted. 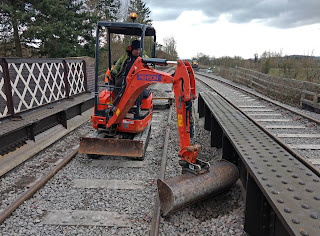 The Gotherington 4 joined the gang working at Broadway, but sadly there was no reprieve from shovelling ballast. Luckily we had Steve on the mini - mini digger (the cabless one) and he was able to scoop around a little bit, although that didn't relieve the rest of us from shovelling. 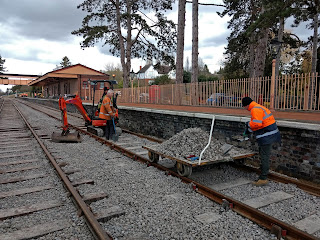 After tamping, a supplementary ballast drop and regulating, there were still strips of too much ballast, and strips with not quite enough. Using the Permaquip trolley we shifted a lot of it from one to the other, but even more could be done. 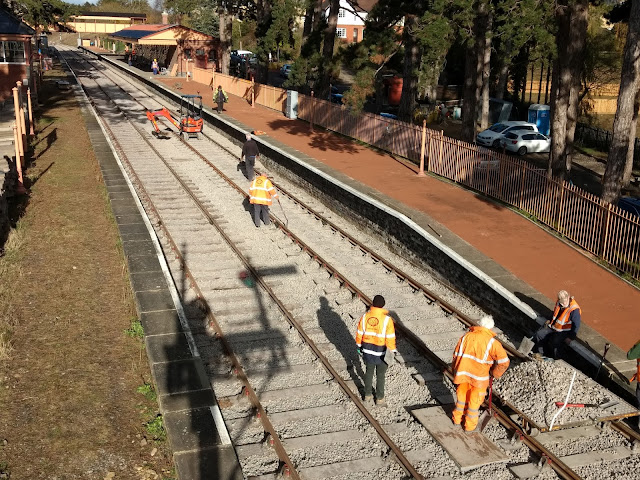 With this 'drone's eye view' you can see another load of ballast being brought up, this time loaded by hand (ouch!) as Steve was working alone in the distance. By this time, mid afternoon, the constant shovelling was starting to cause exhaustion, so we called it a day.

The BAG gang did extremely well today, having laid this orange final layer before tarmaccing over several days on their hands and knees! The material was dumped on the forecourt by a 20ton lorry and was brought in by a fleet of wheelbarrows. Very hard work, and you can see that everyone is really giving their best in order to get the station as complete as possible before the opening.

The turnouts have now been fitted with locking and operating levers, and one of these days a test locomotive will be taken through the station to make sure that everything works. When? Well, that will be a last minute decision.