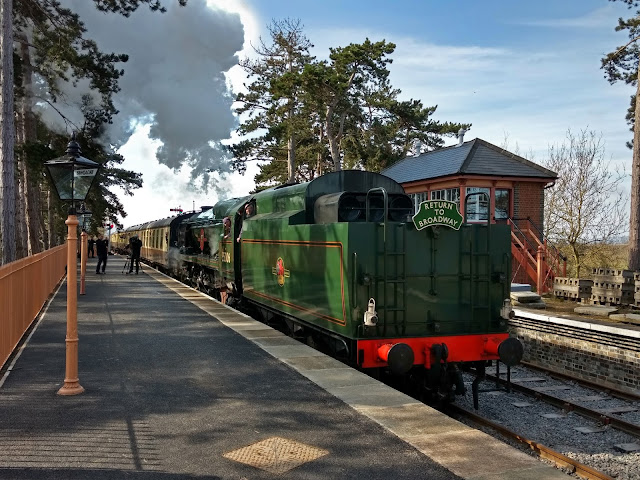 Here is 35006 P&O drawing into the station with a packed, 8 coach train. Note the special headboard. Seconds later, 400 people were milling about the platforms, admiring the beautiful booking office, the rivetted canopy, peering hopefully into the 'REFRESHMENT ROOM' and trying out the new loos. We can reveal that more loo paper was already needed at the end of the day, so they do work and are being used intensively. 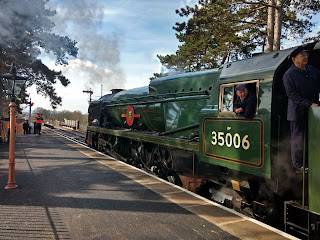 After running round and a brief, 20 minute stop, P&O set off again, filmed by the BBC and recorded by local radio. 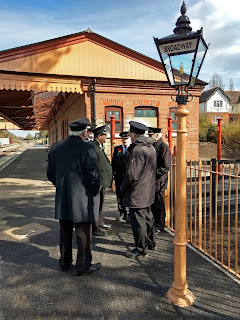 After the train had left again, silence descended on to the station. The railway's stationmasters were coming up bit by bit to get to know the new station, acquaint themselves with the alarms and keys, and find out how everything was going to work.

Here is a bunch of them by one of our replica lamp posts.

What would you call so many stationmasters all in a group? A gaggle? A covey? A flock? A murder? How about a 'whistle' of stationmasters? 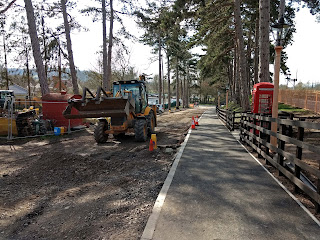 Here and there, last minute preparations for next week were still going on. Steve was spreading and rolling 20 tons of ballast up and down the drive and, we have to say, it was all looking pretty good. It's a temporary measure of course, before we have it tarmaced, but we do need to bring up the levels anyway, and in this way we could cover up the bumps and potholes the drive had acquired over the many years. 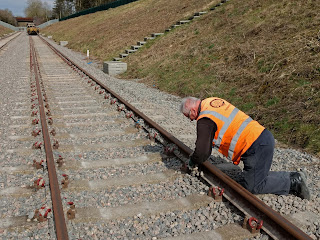 Even the PWay department was on a job, levelling ballast at Broadway north.

Inbitially there were 4 of them, although by the time the camera caught up with them, there was only one left. Here Robert is cleaning out the web of the rail. It looks so much better, and is a reprieve from the shovelling they did 15 mins earlier. A nice, relaxing job in the sun. 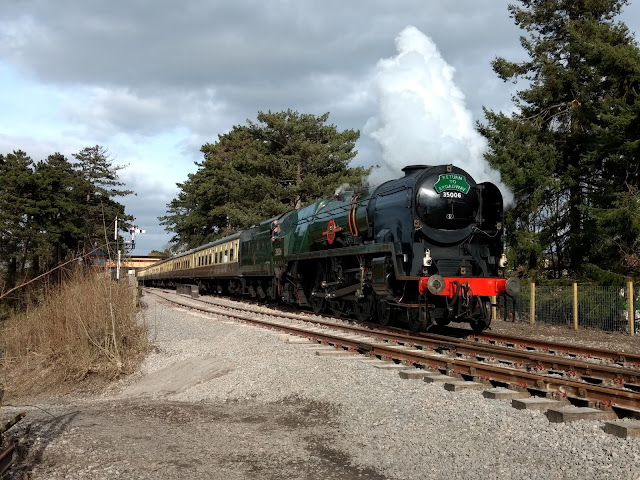 Then the train pulled out of the station - isn't it fabulous? Even the sun smiled upon us, on an otherwise grey and blustery day.

If you'd like to see a video of one of the departures, here is the link:
https://youtu.be/YDD5ZHtP7Qs 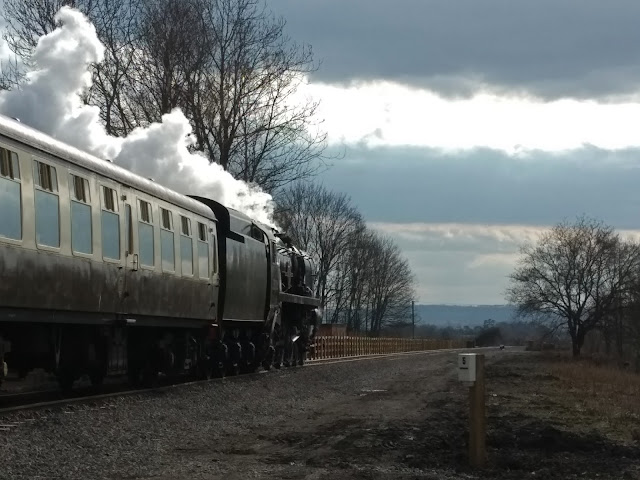 P&O slowly pulled past us and headed south along the new rails. Eight coaches is nothing for this magnificent beast of course, but the horses had to be reined in until they were past the 10mph speed limit by Childswickham Road bridge. From the steam blowing sideways you can see how windy it was too. 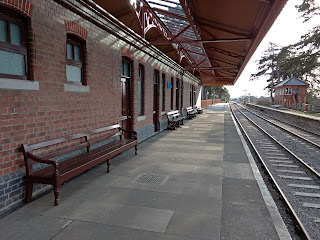 In between trains, we spent a further half day assembling the last of three 3 legged GWR scripted benches. Here you can see them all in a row, the same as in 1904. The original wooden one is in front. That stood on P2 in 1904, so we will have to be patient with putting it back in its original place. 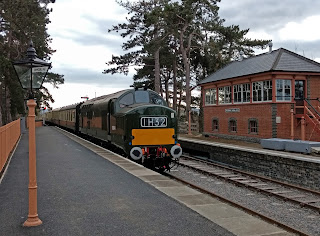 The last train of the day was diesel hauled by our green class 37. It was lovely to have a change of traction, although most people preferred steam and came on one of the first three trains. 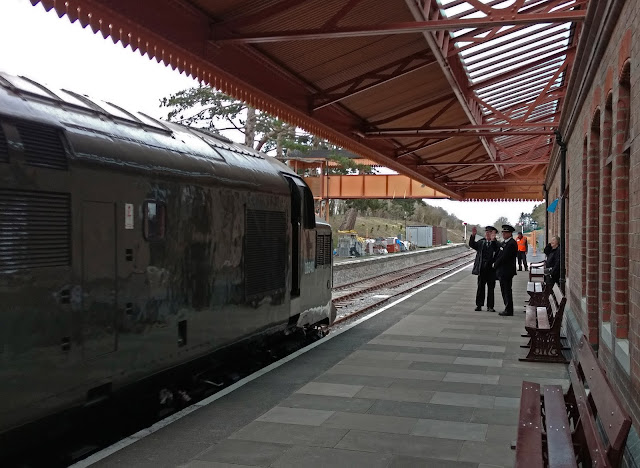 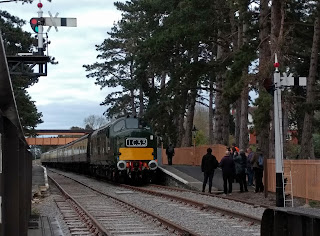 Here is the class 37 about to set off again, seen from the other side of the road bridge. We have a video of its departure, which we will post at an early opportunity (given the slow upload speed, the steamer departure taking priority)

Here is a video of the class 37 hauled train leaving the station with the last train of the day.
https://youtu.be/b9NGLqIrfZY 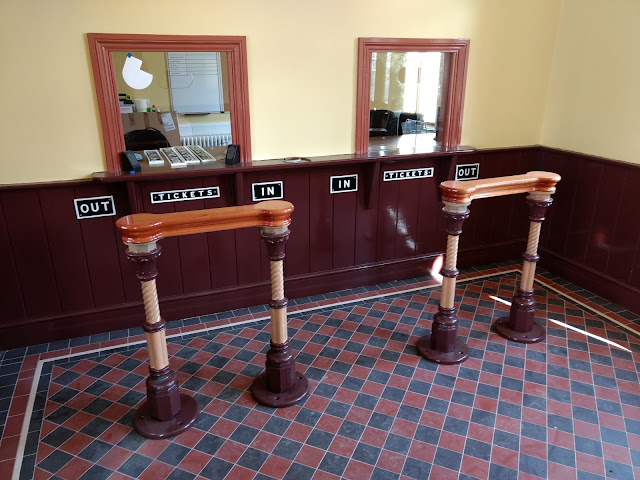 Finally, a quick shot of the booking office interior. It's pretty much finished now, and isn't it wonderful? On the platform we were accosted by a lady demanding to know where we got the tiles from - she wanted them for her house!

This is how we found the kit to make it look so real:

- Ticket hatches inspired by Yardley Wood
- TICKETS found in a member's estate in Willersey
- IN donated by a friendly supporter, OUT copied from it by the nameplate foundry
- Two original posts found on site, battered but useable. Shotblasted and powder coated by a local firm, which also arranged for the new disks underneath.
- Two more posts cast by a friendly foundry in Banbury.
- Carved, wooden tops by our very own C&W department.
- Floor and wainscoting inspired by Kidderrminster station.

What else could be build for the railway in this style?
Posted by Jo at 20:22