Today saw the first steam hauled train pull into our new station at Broadway. The loco selected was our widest - 7903 Foremarke Hall - and with it came 8 Mk1 carriages, our new train length following opening of the extension.

The purpose of the run into Broadway was to test the line and the gauge within the station. In only 12 days from now we will be running real trains with real people (2 days of volunteer specials, prior to the first public train on 30th March) so it is useful to just send along an ECS train to make sure all is well. It was, of course. 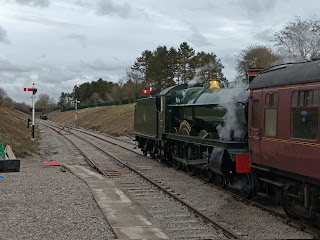 Your blogger had to switch between camera and video mode, so in this picture the train has just rolled to a stop.
The train lengthened to 8 coaches is very impressive. If we manage to fill that regularly, we should be able to generate some useful cash flow. There are so many things in which we need to invest.


The train halted first at the southern end of the platform, and then proceded slowly through P1 while clearances were carefully surveyed. There were no incidents to report, which is great. 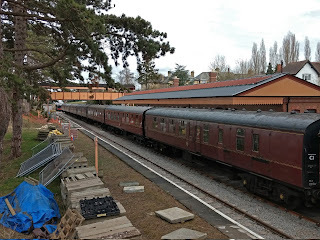 The loco then detached (little puff of steam) and then ran round using the crossover at the north end. The ballast train was stabled in the headshunt as well, there is a useful amount of room there now. 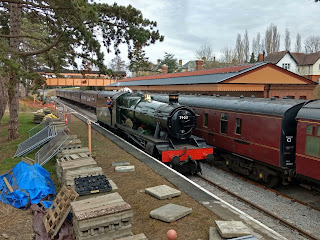 Foremarke Hall then ran round, and a member of the crew checked the clearances along this platform as well. If you look carefully you can see how the cylinder is the widest part. 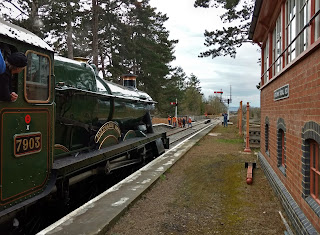 Here is 7903 Foremarke Hall slowly making its way past the Signal box. It seems a century ago that we laid the first row of blues here, and propped up the locking room door frame at one end.

In the distance a select reception committee is waiting for the loco to reappear from behind its train. 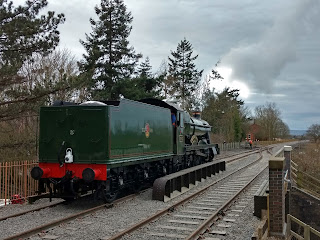 The loco then ran to the southern turnout, whose recently installed levers were ceremoniously pulled to reverse the points, and then she rumbled back over the bridge. 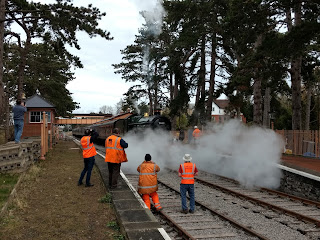 The reception committee jumped into position to record the moment of buffering up. Three Pwayers in the know, and a famous photographer (who said he would be holding a night shoot here in the autumn, so put that in your diary) 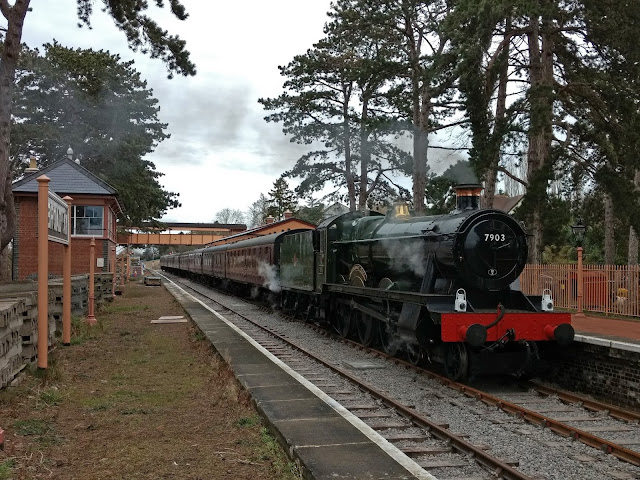 And there we go, the first steamer into new old Broadway.

A lot of water has flowed under the bridge to get to this moment.  Tens of thousands of reclaimed bricks, all cleaned individually, to build the platforms, perhaps 70.000 of them? 3500 hot rivets to build the precise replica canopy, the miracle of finding a near identical footbridge, replica lamp post castings, DIY spearhead fencing, bullhead track on wooden sleepers.

Most of this was made possible only by the contributions of those who bought shares, or sponsored small, individual projects to beautify the station. We say thank you ! Now look at what you have achieved. 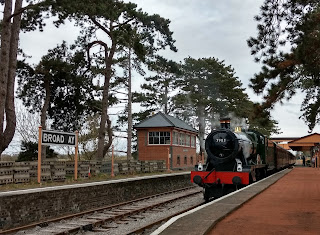 Here is Foremarke Hall resting briefly in front of the running in board and the replica signal box of Shirley, further up the N. Warwickshire line.

The loco crew are off on a short guided tour of the station - what do you think of it so far? They liked it very much. 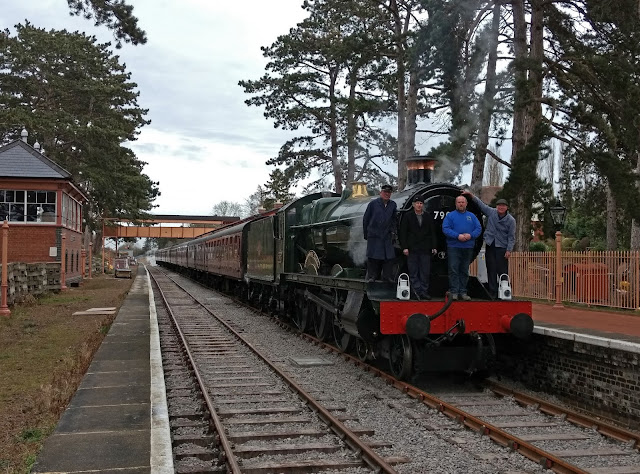 A final posing picture of the loco crew. We called them out of their cab, please stand on the buffer beam so that we can record this, and they said, OK then.

There will be two films of the event on YouTube, one of the arrival and one of the departure.

This is the one of the train coming in:
https://youtu.be/O6w-u87EPns

...and here is the train leaving again, the first steam hauled train out of Broadway station:
https://youtu.be/gjO0yKMRIkM


Saturday: Back to work as normal! Sometimes we has fun, sometimes we just works.