A morning at a local auction today. Mission: to bid for a GWR wooden WAY OUT with finger sign. 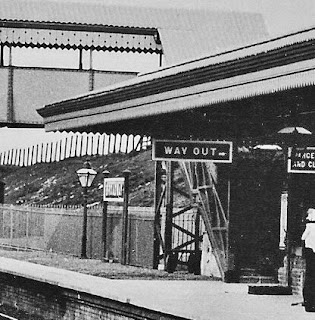 It was to go here, but sadly the modest budget of two GWSR volunteers was easily outbid, and we didn't get it. It cost the lucky buyer over £500!

At least we had the opportunity to sit in a nice warm room over a bacon roll and cup of tea, and chat to a former BR fireman about Honeybourne West Loop.

On which subject, a question: Does anybody have any reminiscences about this short lived set of sidings? We would be interested in some material for a forthcoming 'Cornishman' article.

We shall keep our eyes open for any similar signs at other auctions, and in particular the pointing finger, and any GWR 4 inch letters, unless someone knows of some? We do have a number of boards for Broadway now, bought and indeed donated over the years, but not necessarily the right ones. We could do with more. Once the bustle prior to opening has died down a bit, we shall give these some further thought.

Another item that would be fun to have is a GWR drop case clock for the booking office. One sold today for £1800 and again this is way over our sort of budget.


But we also had a success: 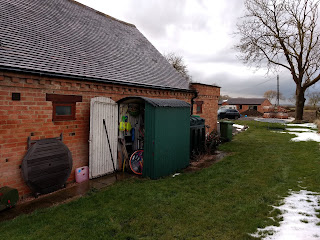 This is a railway tool shed of a well known, corrugated iron design. It was offered to us by its owner and was located in the Honeybourne area, not far from the railway. Its railway location was somewhere in the Evesham area, and it was originally painted black. On the door is a little brass worksplate, which we scraped clean to reveal:


Samuel Taylor, Manufacturers, Birmingham.
We would guess the date of manufacture around the start of the 1900s, and they were a common sight around any railway installation. Interestingly, there is a Samuel Taylor Ltd, with railway affiliations, still trading from Redditch, and this company dates back to 1899, so a connection there is possible. 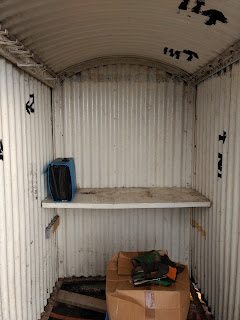 The inside of the shed was in good condtion, and it still had its little shelf. At first we took it to be a lamp hut, but internet research shows that lamp huts had a vent on top to evacuate any fumes from the fuel. This was a railway tool shed.

The first idea was to move the hut as is, using a lorry with a HIAB. The heavy rain we've been having put paid to that, as it would deeply rut the lawn and the lorry might well have got stuck, so removal switched to Plan B: dismantling and removal in kit form. 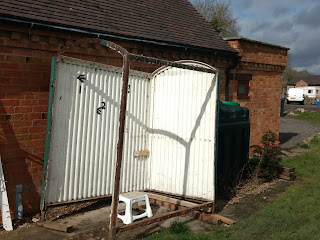 This proved to be less difficult than at first thought, as it had been disassembled once before and rebuilt in its location in the picture. Most of the nuts and bolts were still loose enough to be unscrewed, with the exception of 3 that we cut through with an angle grinder, powered by an extension lead dangled from a window by the friendly donor. 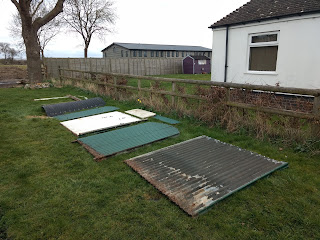 After just a morning's work, the hut was laid out in kit form on the front lawn.

Now to ring the lorry company, could they come straight away, by any chance? 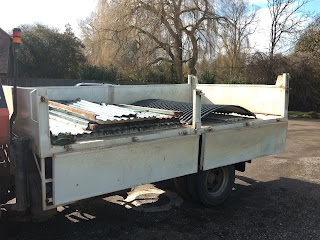 Here it is loaded on the back of the lorry. All of the pieces were of such a weight as to be able to be carried by two people. In this way it would have come by train from Birmingham, and perhaps the last half mile by horse and cart, for assembly on the spot. Neat.

As discussions over the donated hut progressed, as potential site for its reconstruction on the railway emerged: CRC2. Due to the race traffic and the need to remove the hut within the week, it has been stored in a temporary location on the railway, from where the Friends of CRC will pick it up. 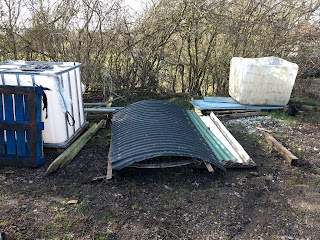 Here it is in storage. A neat little parcel, an item that will make our GWR railway a little more realistic.

You will have read that the Broadway platforms were tarmaced earlier in the week. Here are some additional photographs taken during the two day operation. 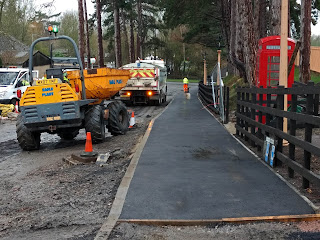 The station approach was a maelstrom of lorries, dumpers and forklifts. The tarmacers started early, and by the time this photograph was taken the footpath was already done. The actual approach road and the station forecourt need further work done on their respective levels, and this will be done (and paid for) at a later date. 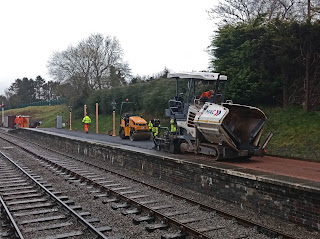 This very chunky tarmac laying machine, weighing 12 tons, didn't manage to get on to the southern part of P1 due to tight clearances, so made a start on the northern half first.

That bucket in front opens out when the hungry beast is replenished. Behind is a roller, and we hoped that it would miss our cast iron lamp posts. It did.

At the end of the first day the tarmac had reached haf way down the northern half and the supply of tarmac on site had run out. 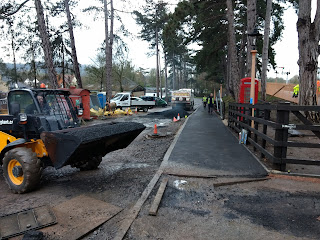 The next morning no fewer than three 20 ton tarmac lorries were parked up the road, it was really busy.

The tarmac people had returned with a smaller tarmac laying machine, and this successfully negotiated the tricky bend on to P1 south.

Here is the forklift bringing in a supply for it. 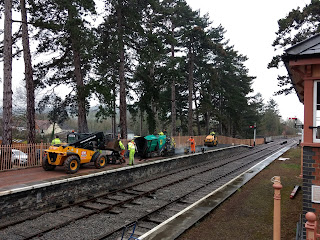 In this picture you can see that the platform is partly done, and the forklift is filling the wheelbarrows for the areas around the lamp posts that were done by hand. At the back the roller is busy making everything nice and flat. 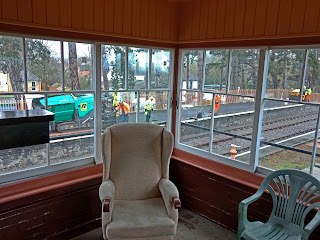 All this could be observed from the signal box - in great comfort. A signalman always sees to his comforts first, the signals however won't be working for a while yet. The kettle, an essential part of this scene, is off camera. And so are the biscuits. 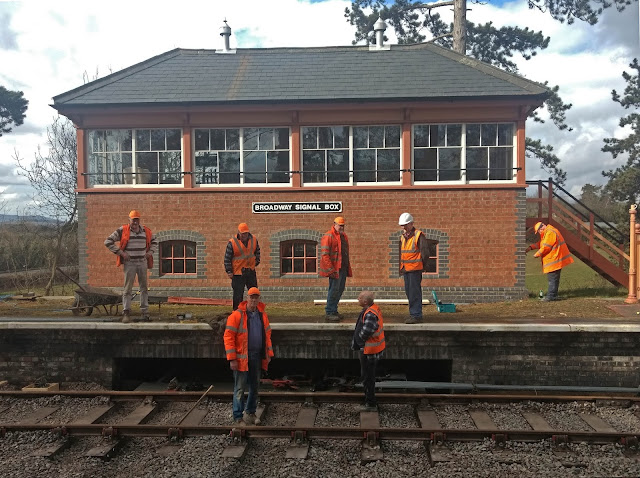 Looking the other way, the S&T gang was actually very busy indeed. Here they are, posing outside their pride and joy. The current job now is to get the rodding stools in, no fewer than 67 being required along the up line. The cribs in the foreground have already been dug out to receive the signal wires emanating from under the box. 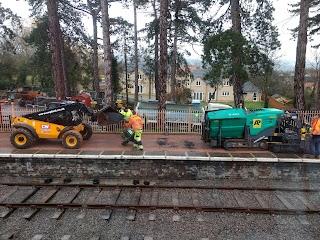 Slowly the tarmacing machine and its forklift supply shuttle moved past the box along P1. Here is the smaller machine, freshly supplied with a load of hot, steaming tarmac. It only just fits alongside the lamp post, behind which a strip has already been done by hand. The men worked very quickly and efficiently. 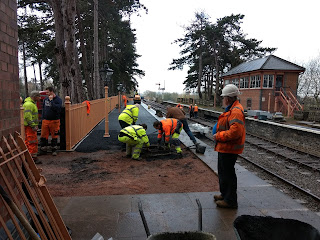 The corner bit was a bit tricky, as there was an inspection pit in an awkward spot.

This area was also done by hand, the laying machine having vacated the platform a few minutes earlier. The new gates were taken off their hinges and parked by the building on the left. 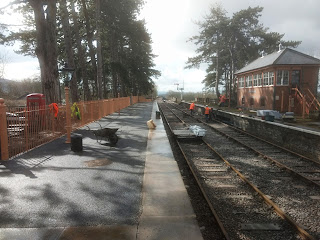 Then P1 south was finished, a very creditable job here. But P1 north was still to do. 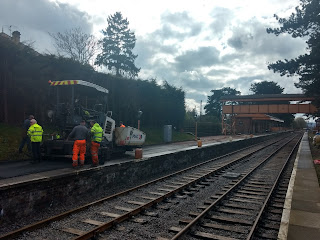 Here the larger machine was used again, as access to this part of the platform was easier, through the site of the future canopy overhang. 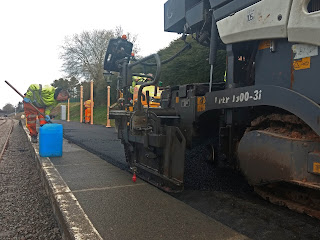 On P1 north the tarmac layer slowly reverses towards the footbridge, leaving behind a smooth surface spread out by means of an archimedian screw in the centre, and guide rails left and right. 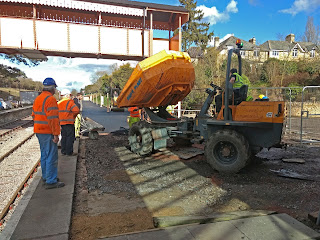 The larger dumper was used for this stretch, and you can see it here dropping a final bit at the end of the run, which ends just this side of the footbridge. The rest will be left for the slab laying team to fill in. 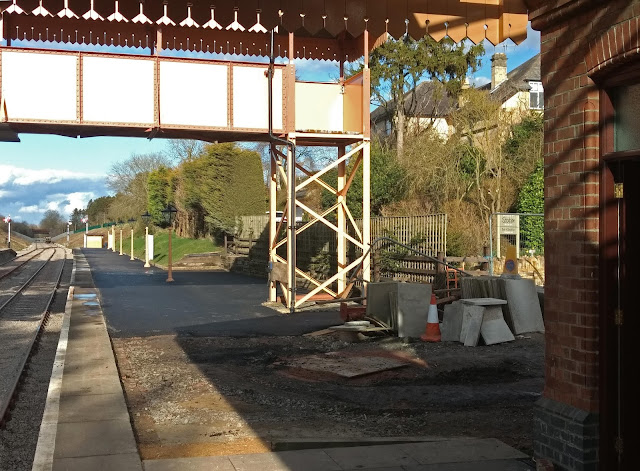 Here is the job done, with just a 9m gap left in the foreground. This will be filled with more slabs as in the foreground, and will constitute the floor of the circulating area under the canopy overhang. 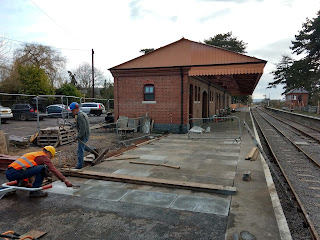 Only a few days later the gap left open had been filled by the slabbing team - they really work quickly. All the platform is now complete, you can walk right through from one end to the other.

The rougher area on the left is where the footbridge steps will come down. 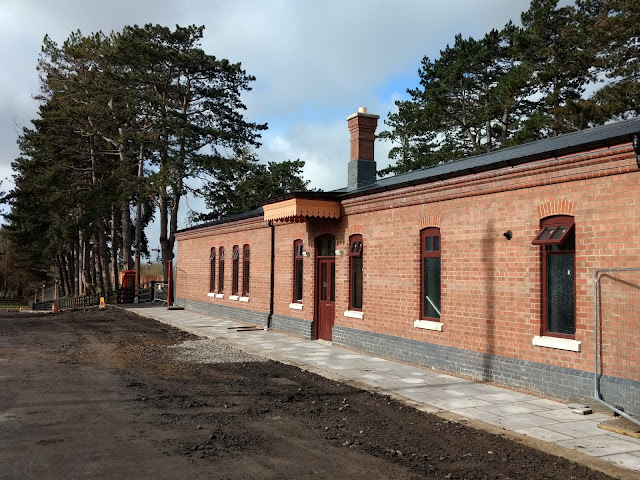 Out front, the Heras fencing has been removed to reveal the Edwardian lady unencumbered at last. The gap in front of the kerbs has been filled in temporarily, to give a level surface for the opening.

Finally, a lovely composition photogtraph by S&T member George Bryant, using a photograph of the test train with Foremarke Hall a few days ago, and an original photograph that he took on 29th August 1962: 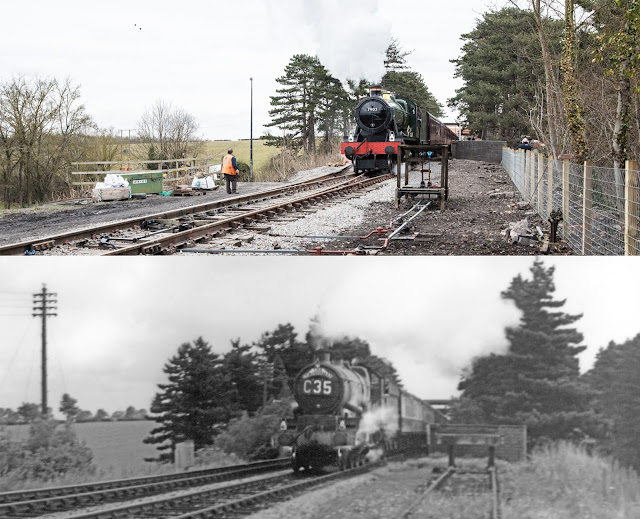 The original B&W picture shows 5026 Criccieth Castle with the down Cornishman. The Broadway signal box used to stand behind the buffer stop, up against the wall. It closed on 10th October 1960 and was soon demolished.

The telegraph pole visible on the left was absolutely enormous. It stood at the foot of the embankment and was almost 50% longer than visible in the picture.

Back to PWay work next week. Check out today's icy work on Nigel's Flickr site:
https://www.flickr.com/photos/gwr_permanent_way_photo_log