What a splendid day! Bright and cold, with lovely sunshine all day. And we made progress on the footbridge steps again.

First thing, we put up the fourth roof hoop on P2. It's the lowest one on the left we did. 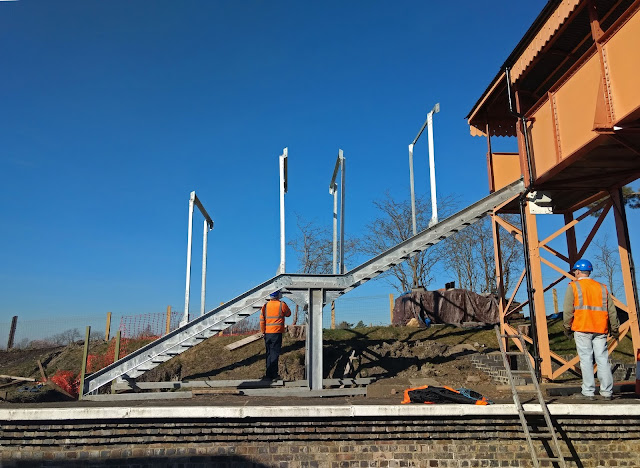 The next thing on our list is to rivet them on, and prior to doing this we need to put some temporary angles on to link them at the top, making sure they are all upright. Then we can rivet the bottoms.

John spent a useful hour or two filling the gaps under the feet with mortar, after which yours truly applied a liberal helping of bitumen paint to those bits that will end up underground. 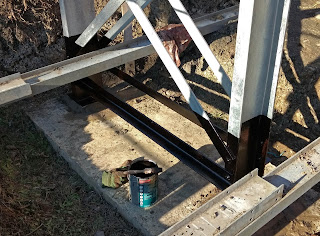 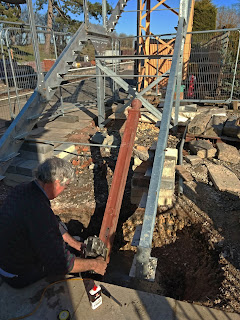 Most of the rest of the day was spent on the P1 side, where we set out to bolt the newel posts to the bottom end of the stringers.

This was quite a tricky exercise, as the stringers have a slight twist in them, but we want the newel posts to be perfectly vertical.

In the picture you can see Neal with the mag drill, drilling three holes in each of the two posts for the bolts holding on the ends of the stringers. 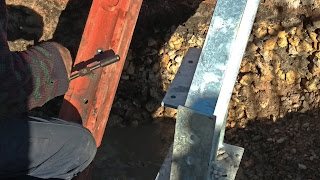 After drilling, he threaded the holes to take the M16 bolts. 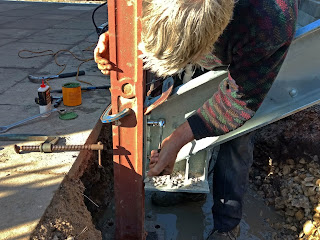 Then the bolts were screwed in.

You're getting a digest of a day's work here, the stringer end needed a lot of jiggling around to get the bolts in and the end in line with the posts, and one of the bolts went in at a cross thread and the hole had to be re-threaded. All that took quite a long time. Just 3 pictures though. 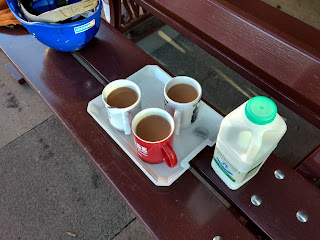 In the middle we afforded ourselves a cup of tea, natch. We deserved it. Biscuits too.
Why is the mess hut so far away? When will we have a cafe nearer by? Oh, on opening, OK then. 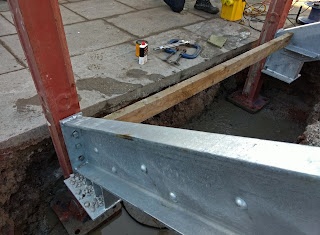 Finally all 6 bolts were in. The posts are now in a slight 'V' shape because of the twist in the stringers, but that is easily corrected. You can actually twist them upright fairly easily, and we will see to this when we bolt them down into the concrete underneath. 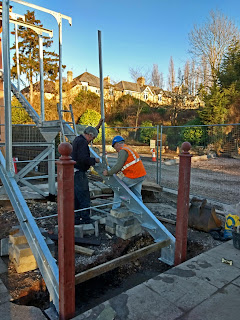 In the picture on the left you can see John and Neal fixing on the last of the hoops, this last one being in two parts with no bridge at the top. This is because they mark the new end of the canopy overhang, the furthest place it can go before it hits the roof of the steps.

We also took the letterbox and former bell off the Heras fencing panel. Unsure as to whether it is still needed, we put the letter box on the small spearhead fencing panel by the gate. We shook the letterbox a little and a bill addressed to the railway fell out! We will drop that off at Toddington. Lord knows how long it has been in there. 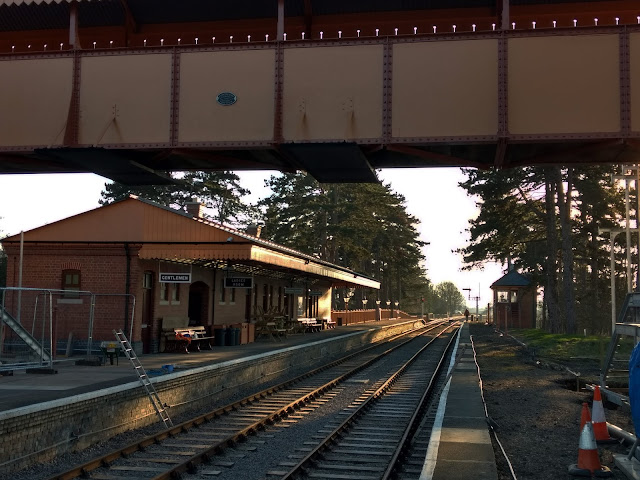 Friday's last picture is a snapshot of the station as the sun was setting behind the trees. There's something golden and magical about the sunlight at Broadway.

Saturday on the relay

We're getting close to the end here now. There was a good sized gang too.

First job was to finish off the storage headshunt. 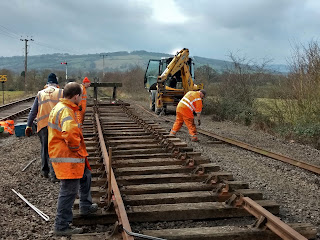 Four rails remained to be dragged back in. As the JCB was out of action for a few days this was not done on Wednesday. 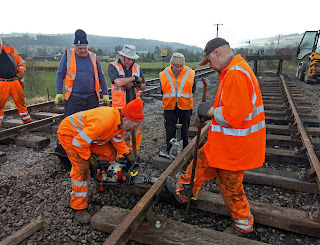 With all four rails finally laid in - and fitting still, after all the dismantlement etc - we bolted on the fishplates. 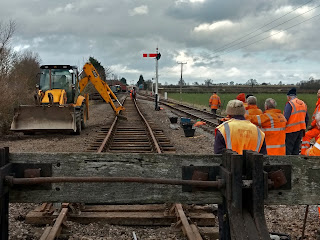 Then it was 'tweaking' time.

Although this is only a storage siding for some engines and bogies, we do have a little pride. It's got to look +/- straight after all. 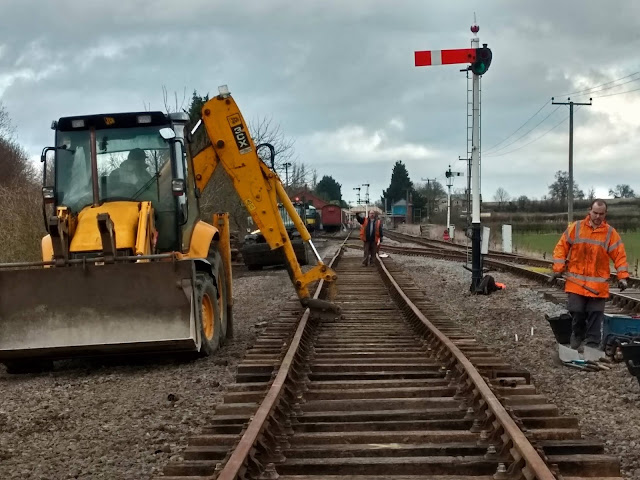 Nigel has a good eye for this. You need good cooperation between the eyes and Steve on the JCB controls.

When you have pulled the rail into the right position, you need to overcompensate a bit, as when the digger lets go, the track jumps back a bit. That's where experience and judgement come in. 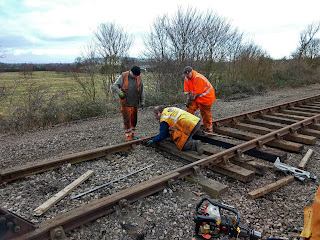 When we put the last pair of fishplates on there was a gap on the last Malvern side joint.

Mind you, perhaps it wasn't that the last rail was a bit too short, but because the raising of the stop block has put it slightly out of position? 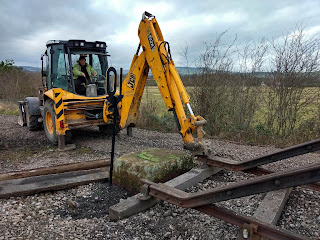 No matter for us. Stevie just shoved it a bit from behind. It's amazing how a small twist in the stopblock closes the gap between the last rail ends to exactly where you want it. The last plates were then fitted without problem. 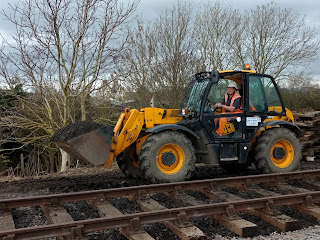 With the track in and the track straight, we added a little ballast just to support it from underneath where required. 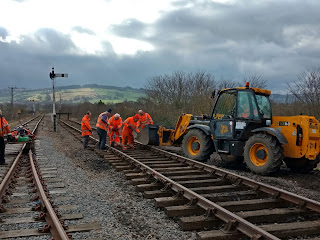 We didn't use the new ballast - that's a cost to the railway - but some of the spent ballast in the car park. Just enough to pack this short stretch of track, but not to deep ballast it. It won't see any trains running over it, just stationary wagons. 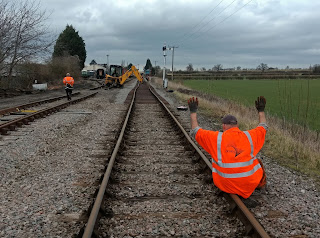 That completed the headshunt relay. Just before lunch we started to straighten the main line relay that we had done.

This time it was Bert Ferrule giving Stevie the signals. 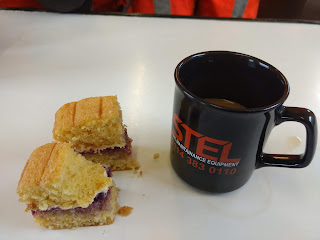 Lunch saw us dig in somewhat enthusiastically into this tasty sponge cake made by Mrs. B, with tea of course.

This was after a hunt for the cake, as the contents of the traditional cake tin had, while we were working, been replaced by rocks by an anonymous wag. 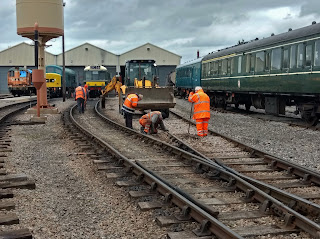 After lunch then. We had a request from the loco guys to improve the curve on one of the shed roads, as the 'King' didn't like it much during its last visit to us. Steve gave us a start with the digger, but... 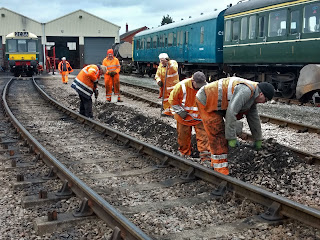 .... nevertheless we had to do a lot of digging (yours truly excepted, with a back injury) so that the curve could be moved right. This to improve the alignment, and take out a couple of kinks. 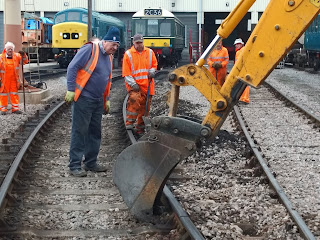 With the sleeper ends dug out Stevie was called in to yank the curve into a rounder shape. 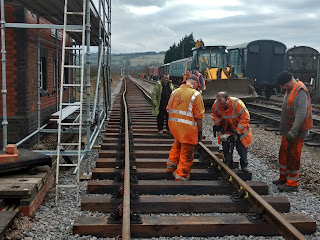 As a final job for the day, we set out to align the rest of the main line relay.

This was made difficult by the scaffolding round the box. What to do? We couldn't delay, as the Dogfish with ballast need to pass over it when straight, and the tamper is coming soon.

The solution - take the chairs off the sleepers in conflict with the feet of the scaffolding, then shove the rest underneath it. 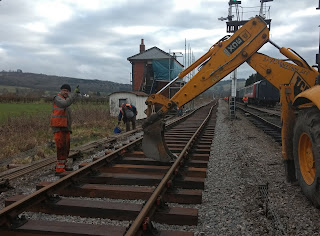 Ade here passed on the rather distant commands of Bert, who had his eye to the rail a good 100 yards way. Steve then pulled the required lever. 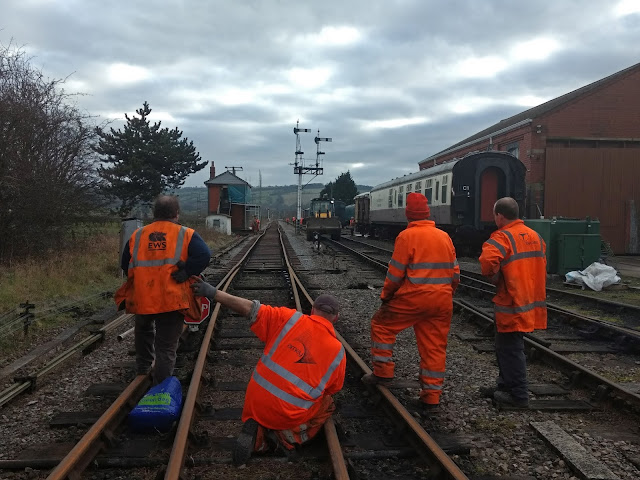 A panel of 4 experts gave their time freely during the track alignment process.

At the end of the day our main line relay was complete, as far as the track assembly was concerned. Now it's time for ballast and the tamper.

As a sign that we have finished our mess coach is moving back to Winchcombe. So its true...