A visit to Birmingham

Saturday morning saw us assemble in the PWay mess coach for the ritual cup (s) of tea. 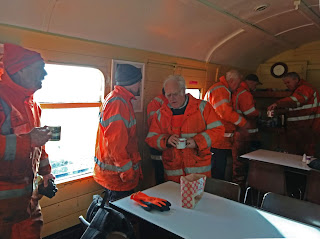 When the teapot eventually arrived, heavy and steaming, a queue quickly formed before Chris, who was 'mother'.

Doughnuts and a new pair of gloves are also essential this morning. 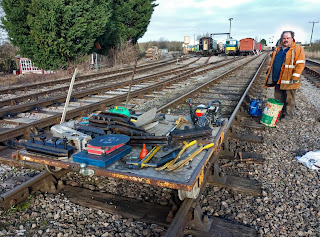 Then it was tools out and on to the trolley. Today's special: Fish! - plates....

Have you got BH ones? 95lbs? Deep skirted? Ought-ought? Big tub of grease? Dang, forgot that one. 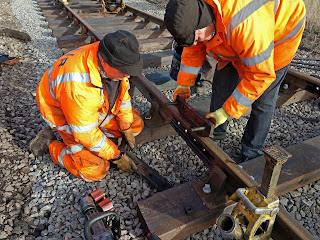 Dave and Neil get on with the first of the fish plates, to be fitted on to the rails we laid in last week. 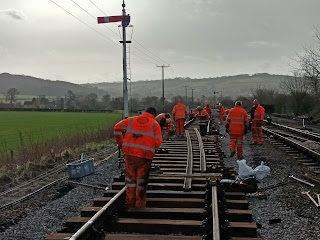 Further along the rest of today's large gang today concentrate on the southernmost panels, next to the last and missing one. Two more rails need to be laid in. 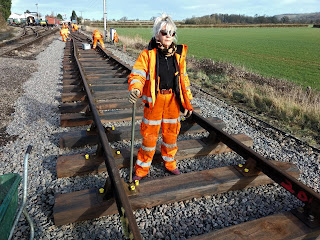 Right at the end is our great helmsman - Jason, leading the Argonauts. Aka Diana, today's old ferrule remover. 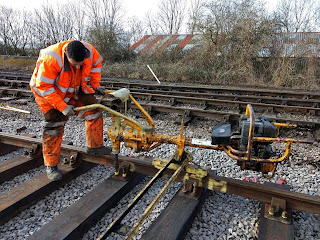 Hayden is on the TB2 and tightening up all the chairbolts over several lengths. When they are in place the next team springs into action: 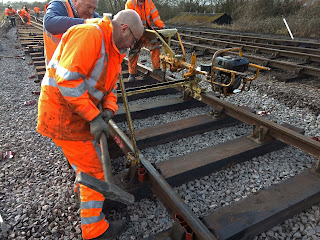 Tim, Neal and yours truly on Panlock keys to get the rail nice and tight in the chairs. There's definitely a knack to this. Tim has the hammer knack here. 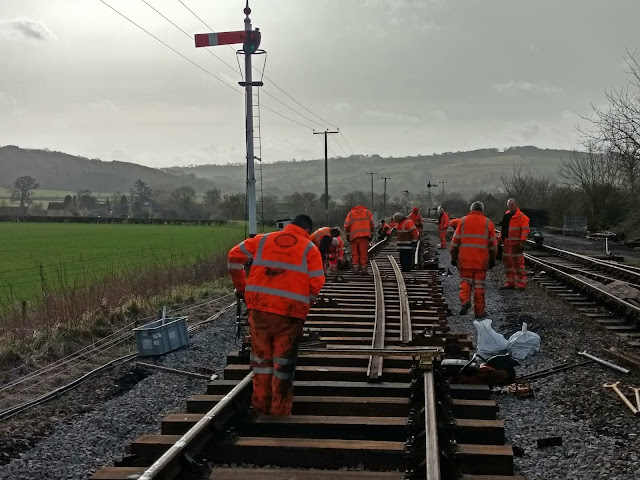 Towards the end of the morning the tightening down team had reached the final gap, where two rails remained to be laid. 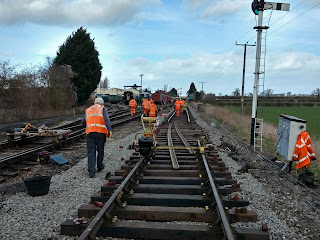 It was decided that this was a good point to pause for lunch, and the team needed no persuasion. Like synchronised swimmers we all returned to the mess coach in unison.


In the afternoon the gap was closed and, in a rudimentary fashion, the track is now back in place, but not yet usable. Some simple supportive packing is now required, so that a ballast train can pass along it, ready for the tamper, which is due in a couple of weeks.

A delegation of 4 went to the Heritage Railway Association awards evening, which was held in a major central Birmingham hotel and attended by all sorts or representatives of the heritage railways industry and its press. The HRA is our very own trade association. 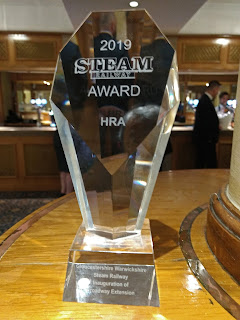 You may have read that one of the awards within the 2019 HRA scheme is given by Steam Railway magazine. In a poll of their readers they were asked to vote for one of 10 nominees and just prior to the awards ceremony the magazine pronounced the GWSR the winner of their section, for the opening of the Broadway extension.

On the left you can see the rather splendid cut glass trophy!


The remaining HRA awards winners remained a closely guarded secret, with 4 or 5 finalists in each section. We went not knowing who would win, but keeping our fingers very tightly crossed. 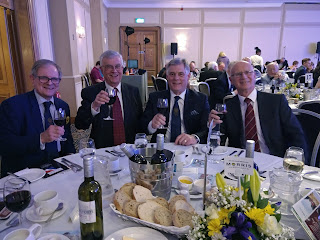 Here is the GWSR delegation, sparing no expense and dutifully attending the prestigeous premises and consuming a splendid meal with wine. It's what volunteering is all about, isn't it...

From L to R is Ian Crowder, our public relations officer, your blogger unmasked for once, our chairman Richard Johnson and Tony Boucher, long time Broadway volunteer and now head of FoBS. 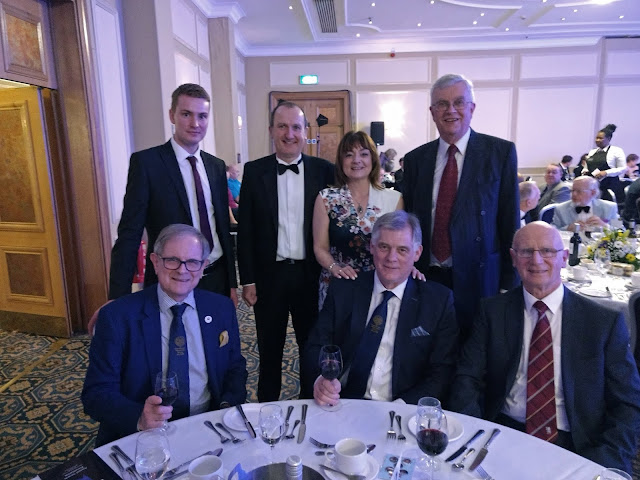 Other guests on our table included Nick Brodrick, Editor of Steam Railway, Steve Oates, CE of the HRA, and Jules Cox, Account Manager at Steam Railway (top L to R).

Your blogger was encircled by two staff members of Steam Railway and advice whispered into his ear by Ian was that 'nothing is ever off the record'. That rather limited the scope of the conversation, so we spoke blandly about station architecture. 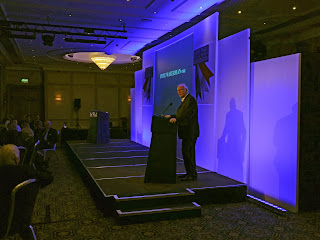 Pete Waterman OBE was our guest speaker and kept us fascinated by nostalgic tales of days gone by. We ate, listened and laughed as the evening progressed, still completely in the dark about our chances about any award. We had entered ourselves in the HRA Annual Awards category for large groups, and there were 3 other nominees. 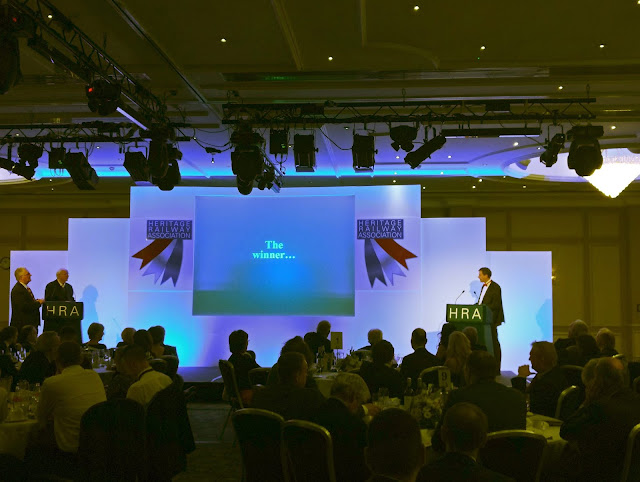 In turn through the second half of the evening the categories were reviewed, with a short slide show from each candidate, after which each winner was announced.

Our category was the very last one too. We waited and waited with our hearts in our throats. Finally the slide went up: The winner is.... 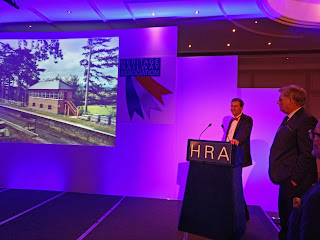 We were thrilled ! We marched up to the podium to see a short slide show of our work, including of Foremarke Hall in the newly opened station. 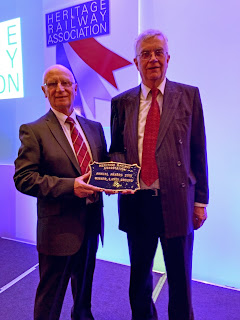 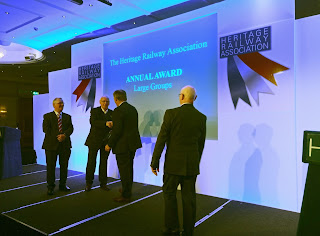 With great pride we mounted the podium for a handshake from Pete Waterman OBE, and to receive the award itself, a heavy brass plaque in the style of a Chas Roberts wagon plate. 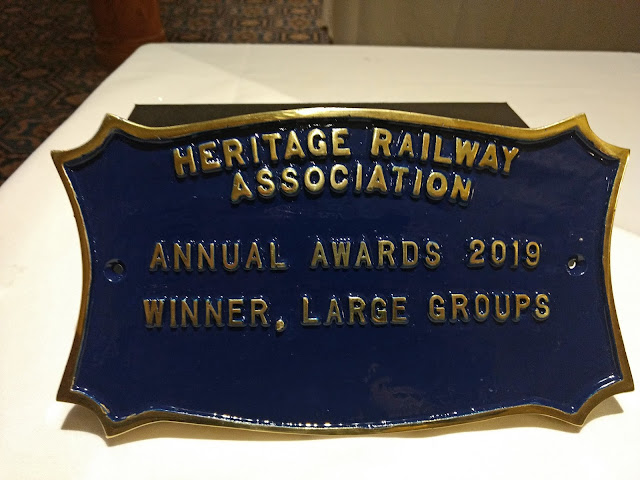 Here is our award plaque, and it is rather beautifully made in cast brass.

The GWSR is honoured and proud to receive an award from the Heritage Railways Association. We have tried hard to make Broadway as realistic and beautiful as possible, and this has been recognised not only by our own trade association, but also the readers of Britain's largest circulation steam railway magazine.

We are indeed a heritage railway, 'a railway museum for the benefit of the public'.