Saturday was bitter cold, but the PWay gang was a hive of activity - the best way to keep warm. 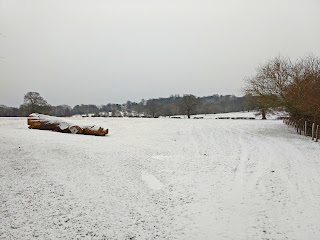 The Cotswolds were cold on Friday, with snow just about covering the grass, although not quite. 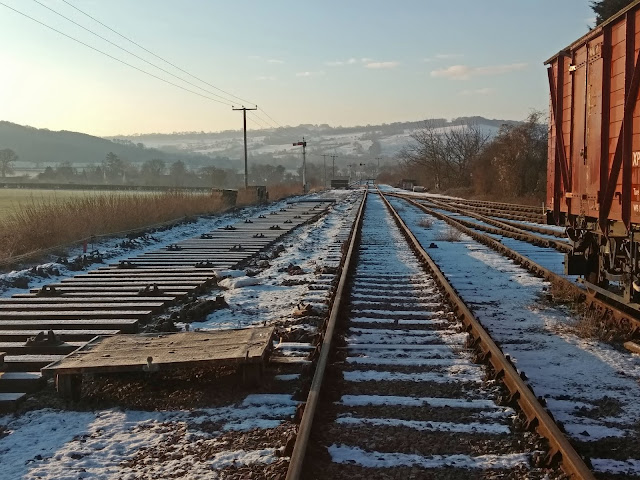 This morning started bright, with an excellent sunny forecast, albeit icy to start with, and we all huddled round the kettles in the mess coach as they burbled and sang on the gas rings. The inside thermometer read minus 2 again. 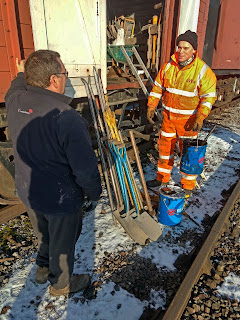 We had quite a small team today, maybe 10 of us.

David here has got out all the tools we think we will need, while Stevie nods his approval on the choice.  Basically stuff for manipulating rails. 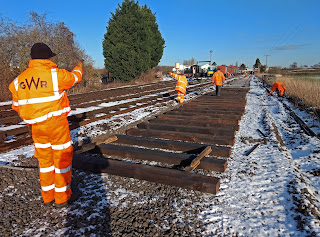 As everything was covered in a thin layer of snow, you can easily see how many sleepers we laid in up to the point when this picture was taken. We had to stop laying down any more at one stage, as it would make it impossible for Stevie to drag any rails through. 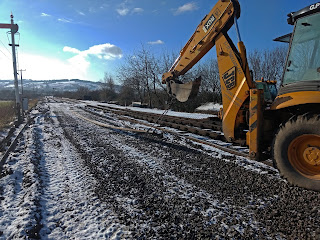 And here he comes, with a pair of carefully selected second hand BH rails for our pleasure to lay.

We are not putting back the exact same old rails in the same order - they will now be better matched, and a number removed permanently for scrapping. 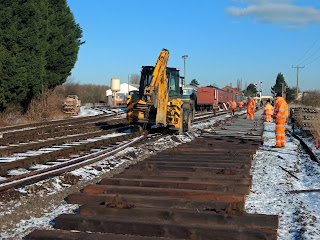 Stevie drove this difficult path dragging the rails, down the 6 foot as it were, although, curiously, this is actually a 10 foot gap, required if it is a siding next to a main line. It explains the kink outwards by the bracket signal. 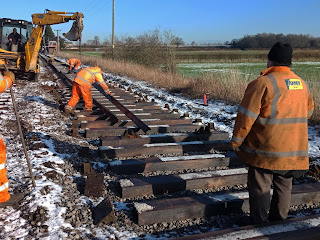 Then we started laying back the rails, on the long row of sleepers that we now have. They only sit on a chair every 6 sleepers, so there is a whole lot more chairing up and keying up to do, even if the rail appears to be in. 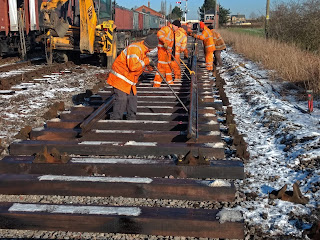 We decided to tip them in, which needs more men than with the JCB, but which is very satisfying if they drop in. As they do, of course. We have done this before... 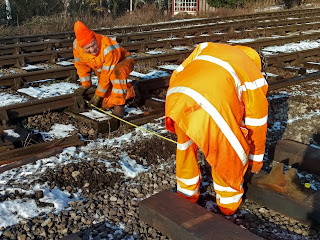 Part of the gang was at the southern end, where the sleepers laid earlier petered out. There was a bit of head scratching about the line to take, and the answer was provided by Steve and Mike, who measured from the parallel siding.

Pity that we measured it, because we discovered we had to bar the line of sleepers into the correct direction, it had a tendency to drift towards the Malverns. 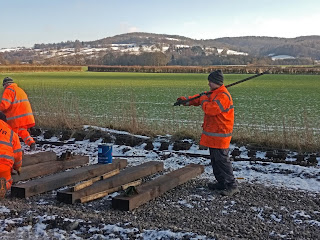 Jack kept guard over us. Let's hope he doesn't turn round quickly with that bar over his shoulder, there is something about Eric Sykes' 'The Plank' in this stance. 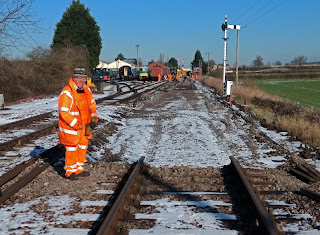 Having come quite a long way south, we started to take an interest in the southern end of the job, and whether the sleepers were really heading for it. They weren't, so that meant more calling out and barring. 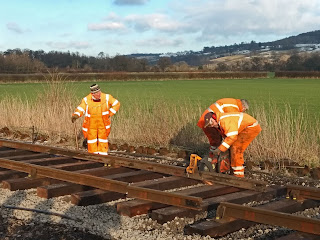 The rails we dragged in had already been cut at one end, and today they were to be cut at the other, so that the crippled ends are removed on both extremities. That should give smoother running here.

Bert Ferrule and Chris are almost through one rail. The last inch is elusive however, as the disk quickly wears down and then doesn't quite reach. 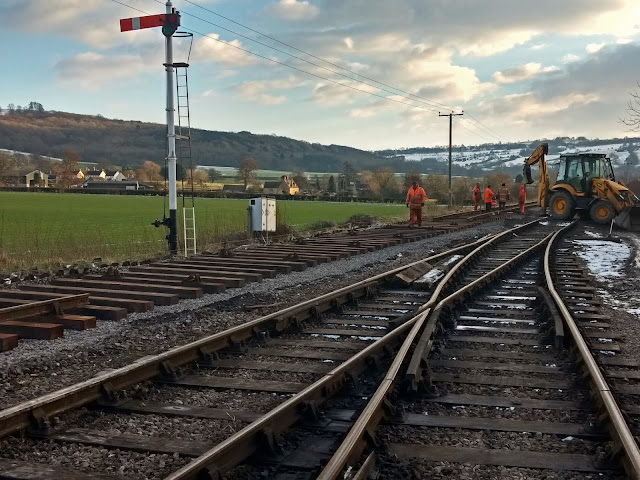 As the light began to fade Nigel's gang started relaying from the other end, and here you can see how close the opposite sets of rails are. 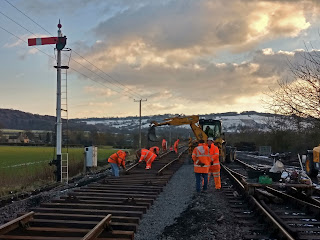 Today we laid in all but the last pair to join the two ends of the rack back together.

One length left to go. That one is a bit more complicated, as we have to space the others very carefully so that the fishplates fit, then cut the last pair of rails to fit the gap. 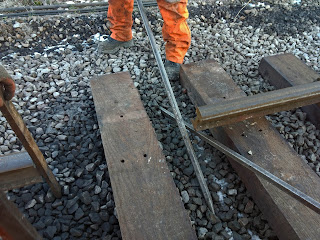 As we cut the northern ends of after laying, Stevie had to push each rail along 2 or 3 feet.

To stop the end of the rail catching on the last two sleepers and pushing them out of place, we lift them with a cross of bars. An old trick of the PWay gangs. 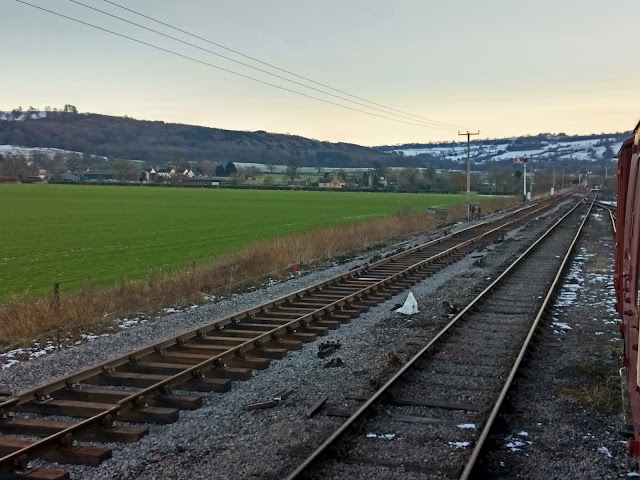 This is our closing view for today - all the remaining sleepers were laid out today (ouch!) and all but one pair of rails laid in, in a basic fashion (every sixth chair placed).

Fish plating, all the other chairs and keying up still to go.

As the sun went down the temperature changed from a little bit hot even, to bitingly cold, all in about half an hour.

Our planned day at Broadway on Friday was cancelled due to the snow, sadly. We will reconvene on another day, very shortly, don't worry. There is lots more to do on the steps. 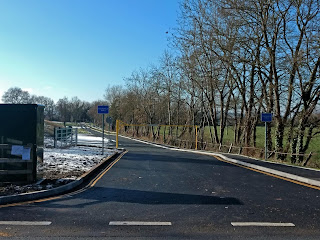 Driving by today we noticed that the Heras fencing across the entrance to the new council car park has been taken down. Double yellow lines have been painted in the throat, and signs indicating a one way system (exit at the Childswickham end) put up. As yet there is no payment apparatus, and this is probably so due to this notice (centre left in the picture) 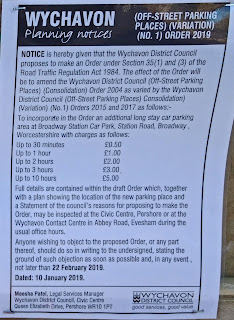 One might suppose that the parking meters will be installed once this procedure has run its course.

The notice was accompanied by a map, with dire warnings about reproducing it, so although it was put up for public consultation we had perhaps better not show it to you.

One thing we can say though is that according to the map there is a 'dismantled railway' along the top of the embankment.

So what fun could we have during the inclement weather?

On opening, the stations along our line all had poster boards, hung on every available space along the platform side of the building. These we still need to make, but it's not so straightforward.

What did they look like exactly, these boards, and how big were they? What colour too.

We learned that the poster boards were made of flat T&G boards, held together by a moulded frame with an inner groove that held the T&G boards firmly together.

But where do you obtain some mouldings as used by the GWR? Not at B&Q. The answer was by taking an original to a firm in Brownhills, and here we had exact copies made, sufficient for 6 poster boards and some additional V boards that used the same pattern. 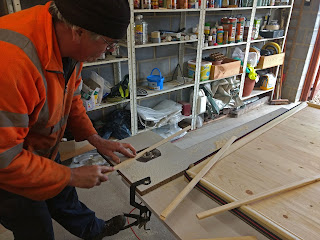 Here you can see Neal at work in a small workshop not far from Broadway....

He's using a router to round off a strip of square edged pine. 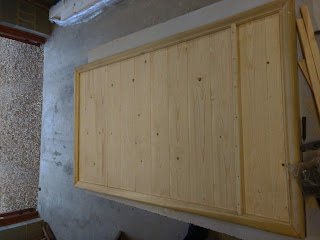 Here is a board fully assembled. The strip on which Neal was working runs across the top and separates the poster area from the title area. This could be painted, or lettered GWR in cast iron. 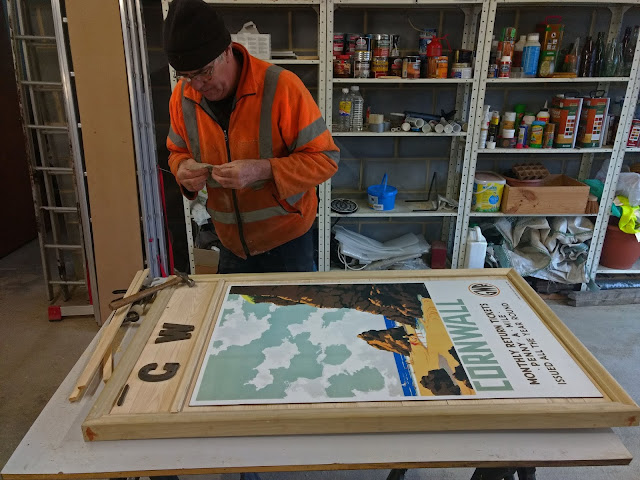 And here is one we made earlier. We've laid in some original letters, and a replica poster. It's one of 4 weatherproof ones, offered to us by a supporter. The colour won't fade on this one, nor will it fray, so it is perfect for the 4 to be hung on the outside wall. It still needs painting in the Broadway colour of chocolate brown.

Two more will be in varnished wood and lettered by hand, and these will go indoors in the booking office. 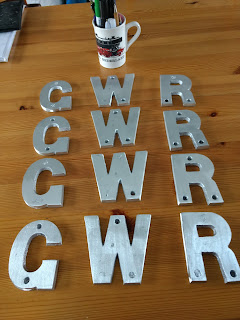 For the outdoor ones we have had these 4 inch letters cast from originals. That took a while too.

We have been very lucky in finding such letters, almost all offered by supporters, which allowed us to build up most of an alphabet of GWR cast letters in different sizes.

So snow, yes, but we didn't sit still.