A grey day today, but windstill, which made the barely above zero temperature bearable. Not like yesterday... 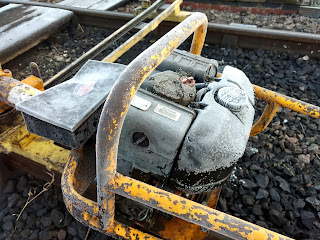 It was well below zero, and our TB2 was covered in ice. 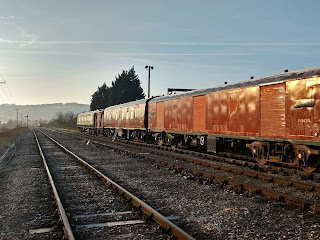 The good news was that our compete PWay train - stores vans and mess coach - has been taken to Toddington, where it was parked on the end of the DMU siding, right next to where we were going to be working. You can't ask for better than that. 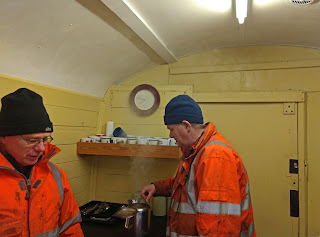 But this morning it was cold, dull and grey. For a while there was no electricity in the mess coach, so inside it was cold and damp and clouds of steam rose from the teapot, and indeed from us, every time we spoke.

Chris is stirring the tea, while Tony waits patiently. 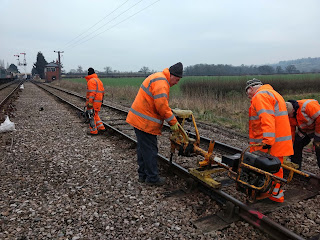 Then off we went, following on from Wednesday. Most of the Cotswolds rail still needed the chairs unbolting, so the TB2 was fired up and Tony went on ahead with the nut runner so that two teams were doing this. 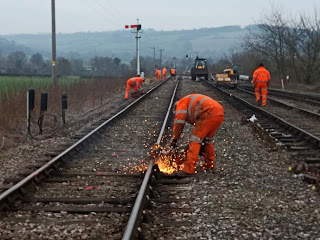 As soon as the chairs had been unbolted the next team moved in to cut off one end of the rails. The two disk cutters threw off big comets of sparks. 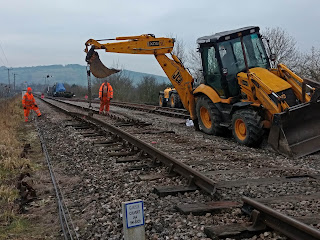 With the chairs freed from their bolts, and one end of the rails cut, Steve moved in with his JCB to lift out the rails. 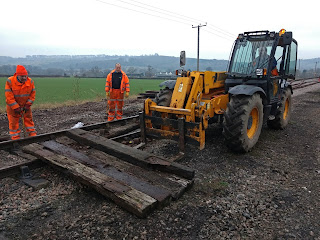 With the rails then gone a final team was able to start collecting the sleepers underneath. They were sorted into re-useable, garden quality and 'beyond hope'. Nigel took them away in the Telehandler. 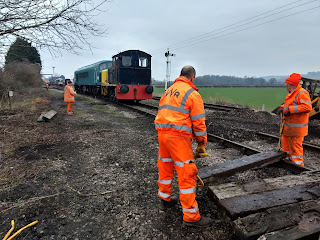 While we were stacking sleepers a train came along. Oh!

It was the loco dept, having a big shunt all morning long. 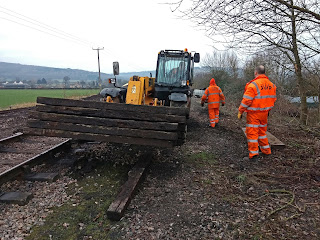 Various methods of digging out the sleepers and sorting them were tried. As we didn't want to mix up the qualities there was still a lot of manual handling involved, even though we had the Telehandler.

Finally a stack was big enough to be taken further back for temporary storage. 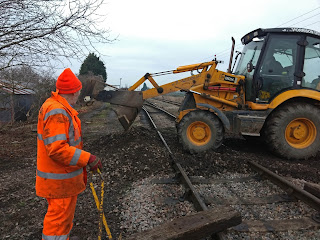 Once we had dug out the first length, Steve was able to get in and dig out the surface spent ballast, which he used to create a crossing here. This will be used for access to the work site, e.g. for the dumper later.

Mid morning there came a moment when we had a little pause, a chance to take this little cameo of Steve and yes, another Steve. Steve on the right is one of our longest serving volunteers, and appears in all of John Lees' photographs where track work was taking place. He has seen it all. 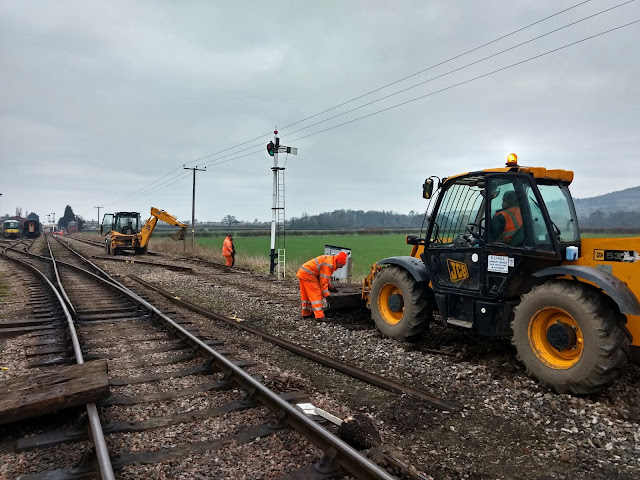 This overview of the site shows the different teams in action. Sleeper collection in the foreground, rail removal behind, and in the distance, chair bolt removal and rail cutting.

The sleeper removal was the slowest, and the others soon forged ahead. 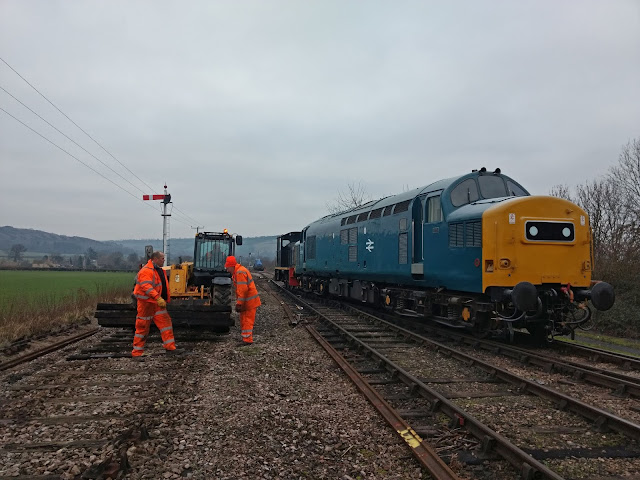 Then another large diesel locomotive appeared. It made the little 03 work very hard to get it rolling from a standing start. 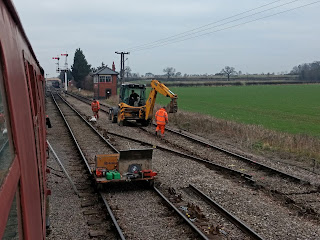 At lunch time Steve on rail removal was approaching the signal box. In due course that end will be relaid first, as scaffolding will be put up shortly to give it new windows at the same time as we are working. 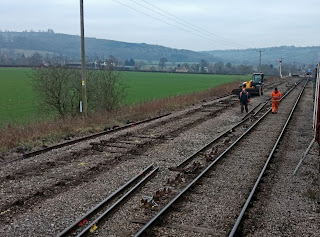 In the other direction we can see the Telehandler, although here stopped as we head off for the mess coach. 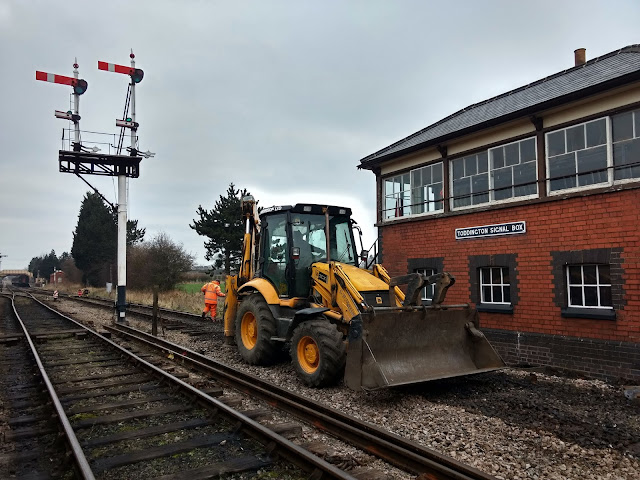 Mid afternoon Steve and Bert Ferrule reached the signal box with rail removal. Only 3 more panels to go now, up to the turnout in the distance. 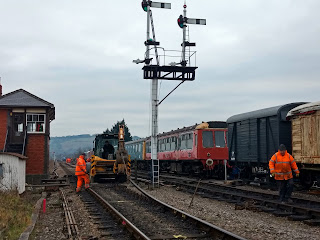 Here they are on the second to last panel, where the first rail is just being lifted out. 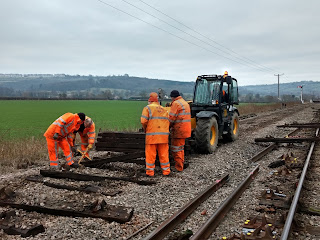 The sleeper removal and stacking was very tiring, especially when GWR throughbolters had to be lifted up high on top of the stack on the forks. They were also first loosened with a bar from their cribs, to give the nips something to grip into.

Towards the end of the afternoon - there is already a bit more light now - the chair removal team began to relax a little.

Here we see Chris peering at John Lees' camera, which still uses negative film. John has photographed virtually every PWay day since 1981. Many of his pictures are now on the Early GWSR Flickr site, with more still to come. 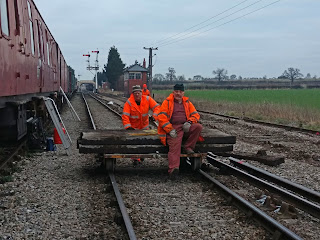 If you are going to push a trolley with these heavy sleepers on it, you will hardly notice the little extra weight from one volunteer. Right? 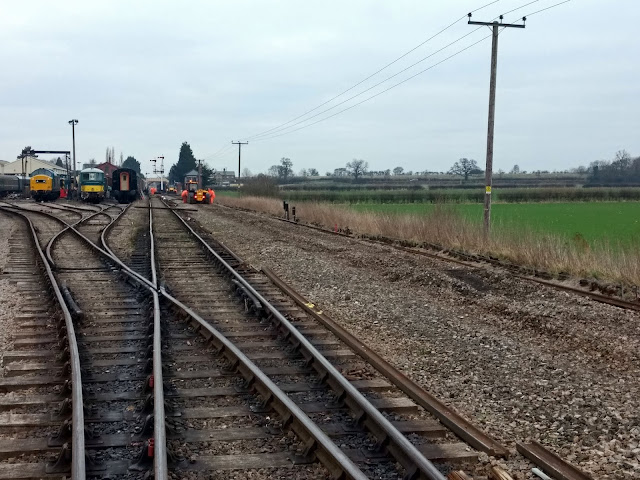 New, treated softwood sleepers are being delivered next week, with ballast deliveries also expected. The job is progressing well, thanks to an excellent turnout of volunteers.

Friday in the loco shed.

A tough start on Friday, minus 4 1/2 and just a couple of ancient fan heaters in the Loco dept. mess coach. We're saving up for a mess room extension to the goods shed, there is a plan, but no money yet. At the moment, and almost from the beginning, we hole out in a converted SK. It has plenty of atmosphere though.

While working abroad you blogger volunteered for a continental loco group, and they also had their mess room in a breakdown van, formerly a 1930s EMU. One day they built a brand new mess room, and while it was warm and clean, all the atmosphere had gone. No more warming your boots over a fuming oil stove, the slight rocking as you walked down it, the ladder up from the ground to get in... 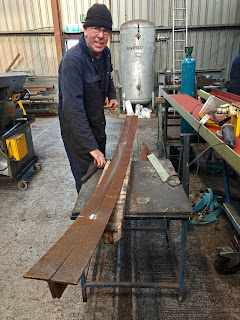 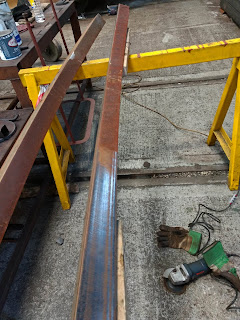 Anyway, Neal has now finished the two fascia boards for the Broadway canopy extension. You can just glimpse them on the upper right of the LH picture. The fascia boards were the two most work intensive items on the list, and now we are on to shorter and more interesting jobs.

Today Neal dismantled the remains of the first draft 4m long ridge purlins, in preparation for making them longer to get nearer the original 7.5m length of the overhang to the bottom of the steps. They have sat outside for over a year and as they were unpainted rust has set in.

On the left Neal is splitting the two curved angles, and on the right is a pause in yours truly's work, i.e. rust removal of the 4 component parts of the two curved sections, prior to painting in primer.

The two double curved sections will be fitted back together again, but with a longer straight section in between. 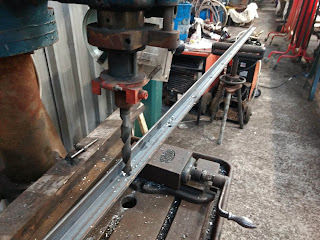 While this was going on John further busied himself with the yard lamp steps, having finished the platform last week.

Here the two stringers for the ladder have been spot welded back to back so that holes for the rungs can be drilled through both at once.

The drill bit here is oversized, just to countersink an area on the end of each rung where it can be welded to the stringers. 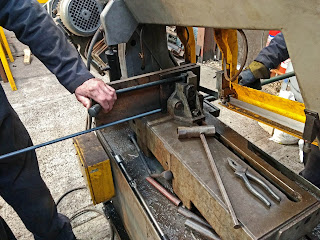 With help from Neal John then cut the rungs from a long piece of bar.

There's a sort of bracket on the far right of the picture which ensures that each length cut is identical to all the others.

Otherwise you get a wobbly ladder. 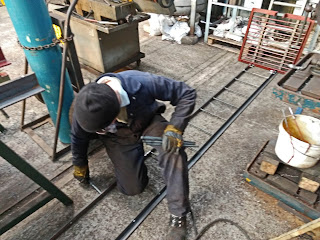 Armed with a bunch of the rungs, John then pushed them through the holes drilled earlier.

Behind him a ladder starts to appear.

Now just to weld them in. 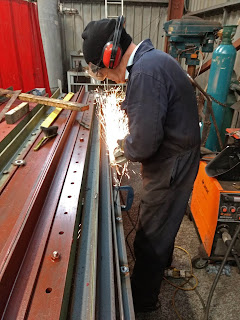 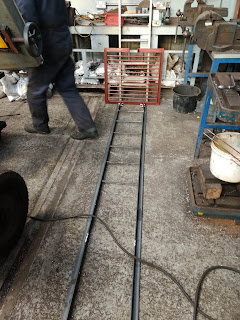 It was rather satisfying, putting in the rungs and watching the ladder grow before your eyes.

After spot welding each end of the rungs, John ground off the excess in the right hand picture. 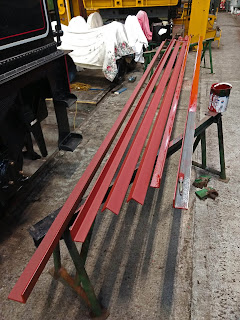 A bit further along the remaining angles for the purlins (see earlier drawing done by Neal on a bit of fascia board) had been sanded down to remove mill scale and odd bits of rust, ready for painting in primer. 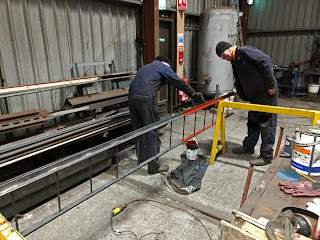 Last thing on this cold day - even Neal put on a pair of overalls today, which is why you don't see him in his usual orange - John primered the ladder for the yard lamp platform. Neal is watching to make sure he hasn't missed a bit. Very easy to do in the half light and shadows of the loco shed.


A comment two blogs ago asked for some updated information on how the railway is doing. It is true that the boardroom blog is suspended at the moment, so it looks as if there is not much news.

The Board is in fact looking at the whole dissemination of information within the railway at the moment, and the Boardroom blog has been removed, certainly for the present, whilst this review is carried out. Nonetheless the objective remains at all times to keep our volunteers, members and shareholders fully aware of our developments. We are working on this.

Ad interim, we can give the 2018 passenger figures, just released to volunteers.

The figure for next year is hard to predict. The Broadway effect may well lessen, we will tighten up on the number of groups, and there will be fewer special events. On the other hand there will be a car park for Broadway, and at the same time the Broadway cafe will open. But seen overall, we don't think we will reach the 2018 numbers, which must surely be exceptional.

There's a second bit of news as well. We're buying a house! 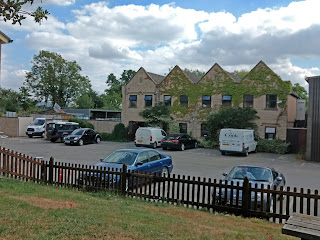 The railway has agreed to purchase the premises of D.A. Cook (Builders) Ltd in Station Approach, Winchcombe. An overview from our platform can be seen in the above picture.

The building has very well fitted out offices on the ground and first floors, and a large yard and covered workshop at the back. There is hard standing and covered accommodation for our road vehicles in the yard, as well as a large area of secure storage. We will also have additional car parking spaces, at a premium in Winchcombe.

We expect to complete the purchase in May this year. There has been a growing requirement for better premises for the Construction and Maintenance team, for the S&T department (currently working out of a Mk1 coach) and our headquarters function at Toddington, still located in Portacabins with failing floors and leaking roofs. We had been mulling how to deal with these, until this neighbouring building unexpectedly came up. The relocations of C&M and S&T also free up space in the yard where the future carriage shed will stand.

In the very early days of the railway three parts of Winchcombe yard were sold off to raise funds to rebuild the railway. We sold a small plot at the throat of the yard, on which houses were built, the yard now occupied by Halls, the forklift company, and a plot to Don Cooke, the builder, who had purpose built premises erected on his piece. This is what we are buying. The plot is opposite the visitor centre, and immediately adjacent to the south end of our yard.


Finally, work on grading and resurfacing the Broadway station drive and forecourt will start on Monday. 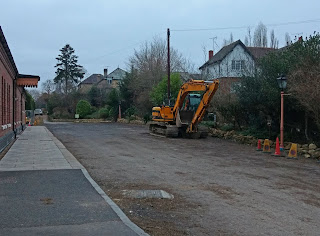 This is another closed season job, and a big 360 digger has already arrived on site.

The current, rough surface of the forecourt has been built up over the many years, and is somewhat higher than it was in 1904. It will be graded and finally given a surface of Tarmac.
Posted by Jo at 18:35