The box and the north headshunt

A large gang turned out today, despite the minus 3 opening temperature. 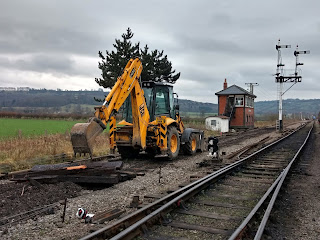 But first we must turn our eyes to Tuesday, when Stevie came with his JCB to remove the spent ballast from the first 4 panels nearest the signal box atToddington.

We are going to relay these first, so that the scaffolding can be put up to allow the window replacement on the signal box to proceed. 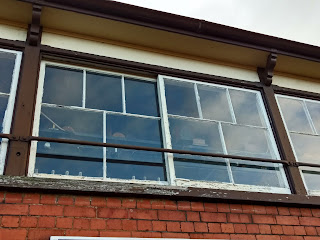 You can see from the cill here that the woodwork is now pretty ropey after over 100 years.

Of course the replacement has been arranged for the same month as we are replacing the track in front of it. But we can deal with that. 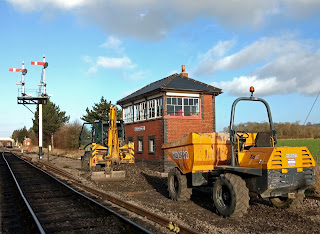 A 6T dumper was hired in to take away the spent ballast and deposit it in the car park. 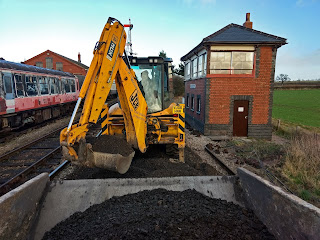 The dumper was loaded with 6 tons for each trip, which went way back south to the yard throat, crossed the line to the Malvern side, and then down a narrow corridor by the loco dept. lighting up pile, behind the diesel shed and out into the car park. Then back empty, bouncing over the 100 odd sleepers still in place on the track. Ouch! 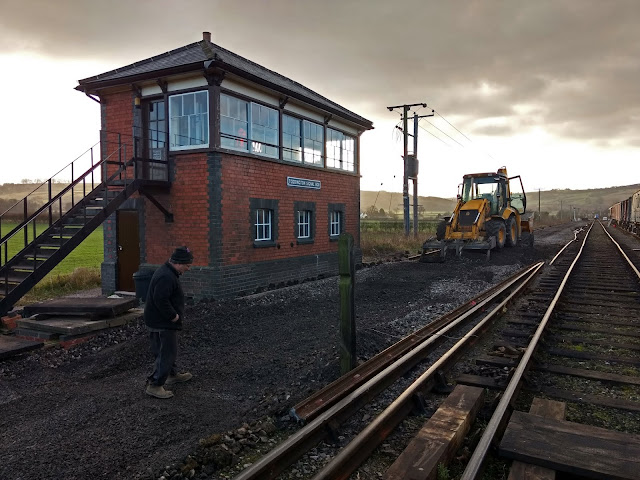 The MO was for Steve to dig out the space represented by the 4 panels, and transport the spoil to a pile by the electricity pole. It was too narrow for the dumper to come down here reliably, too many signalling bits poking out of the ground.

During one of the 20 journeys to the car park with 6 tons each time, the lever to tip the load became wobbly and reluctant to obey orders.

Steve quickly diagnosed the problem, by giving it a yank, and it came away in his hand. There was a fatigue crack under the console.

The service from the rental company - Hensons - was excellent. They came out with a brand new lever (what else do they have in stock!) and within the hour we were back in action.

And why not have a cup of tea while we wait? Excellent idea. 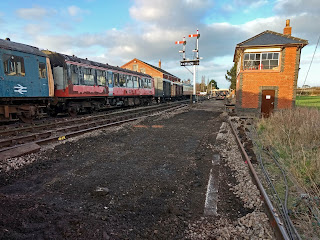 At the end of Tuesday the 4 panel length was scooped out, and ready for a first layer of new ballast. It's coming on Thursday, so we should be able to lay out the first of the new sleepers as early as Saturday. 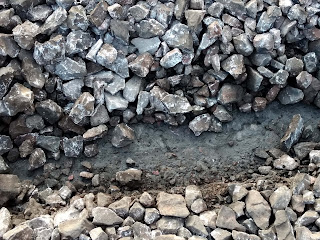 Why all this to-ing and fro-ing with ballast? Well, it has a nice layer on top, dropped within recent memory to allow tamping, but look at what the sleeper was actually resting on: a layer of shiny, water tight clay. It's still wet, even after several dry days. In the early 1980 when we laid this, there was no money for new ballast and much of the original ballast had been scraped off and sold by BR. So the track gang was reduced to scraping ballast together from left and right and throwing it between the rails.

On to today, Wednesday then. 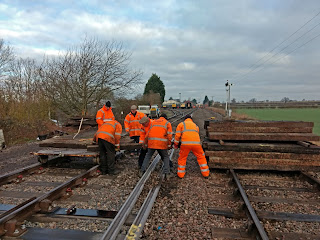 We were following on from Saturday's work, cleaning the site of scrap, broken sleepers and those sleepers still in the ground. The best were kept apart, and stacked on the pile on the right.

Oddly enough, the letter K for 'Keep' had only been sprayed on the heaviest of them. A coincidence? We think not..... 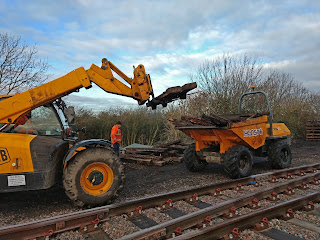 With the sleeper retrieval unit working above, we had a second lot of volunteers sorting out those sleepers dug out by Steve (in a bit of a hurry, as he was on his own) and dividing them into garden quality, possible re-use (we may relay the headshunt here as well) and compost. Remember that these were laid in the early 1980s and were second hand even then, so they have done well. 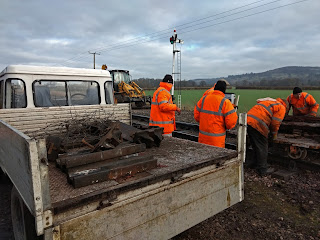 We ran the Permaquip trolley up and down the loop line a few times and collected a mound of unwanted material. Well, unwanted by us.

The chairs went to 2807 (gratefully received), the bonding wire was skipped and the rail ends went to our heavy duty scrap skip at Winchcombe. Everybody happy, and a nice clean site too. 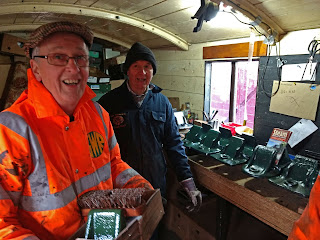 On helping to unload the GWR throughbolters for the 2807 group, Paul enquired how he might acquire one of the famous boot scrapers. 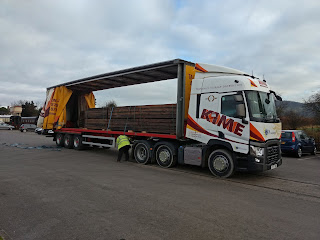 Outside, the second of three lorries loaded with the new sleepers arrived in the car park. All the kit is coming together nicely. 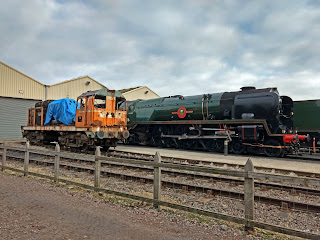 On the return journey back to the site, we observed evidence not of 'dieselisation' but of 'steamengineisation'. The class 20 is going for scrap, while behind is P&O after a complete rebuild. 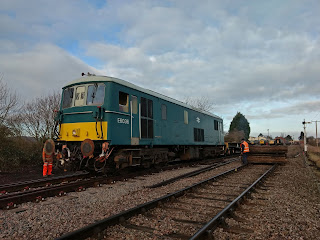 During the day fresh ballast was delivered to Stanton yard, and as soon as the Dogfish were brought down from Broadway Stevie loaded all 6 of them for the afternoon programme.

While this was happening, Neil brought a Warflat down  to Winchcombe for loading with redundant concrete sleepers for the embankment reinforcement works planned around Stanway viaduct. 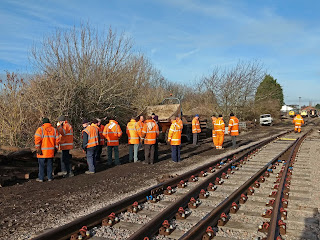 Mid afternoon we had pretty much completed the tasks on the list this morning. This resulted in a large group standing aimlessly around, so it seemed. But no, this is a modern management technique, called 'Management by Wandering Around'. Don't be unkind.

Finally the Dogfish were ready for use. It takes Stevie about 3 hours to do this, a considerable task. 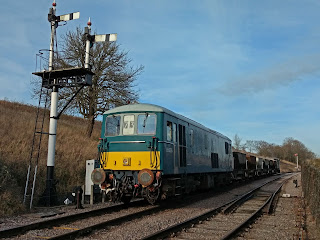 The class 73 brought the loaded train with Shark from Stanton to Toddington, in preparation for discharge at the north end of the carriage siding. The north end is completely unballasted and also suffers from the attention of rabbits.

The siding in question is the one on the right here. 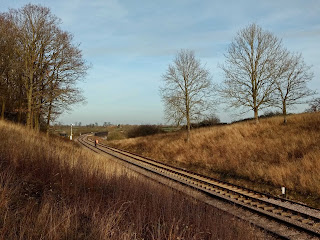 On this 'before' overview you can see the existing ballast peter out on the right, and then bare sleepers right up to the end.

The ballasting of this section will also make it easier to walk along. 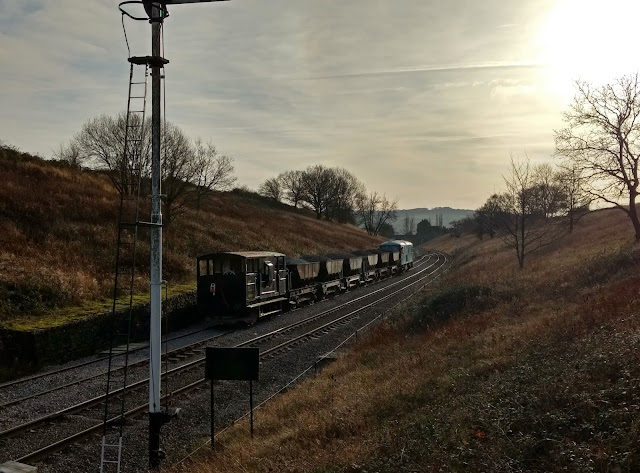 A toot announced the arrival of the full ballast train, being slowly propelled up to the stop block.

We've got low winter sun here. Interesting light. It seems to be getting a lot lighter in the afternoons now, but actually darker still in the mornings. Or so it seems from under the duvet. 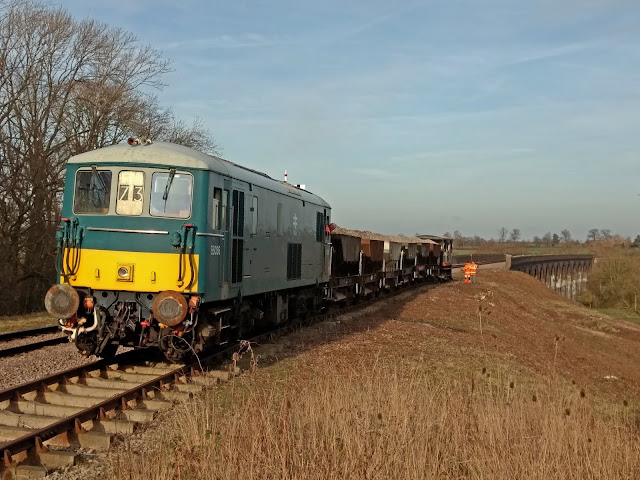 On the right the embankment leading up to the viaduct has been well cleared of undergrowth. The embankment stabilisation works, using the redundant concrete sleepers at Winchcombe, are intended to reinforce the 4 corners of the viaduct by means of deep piles driven into the ground. 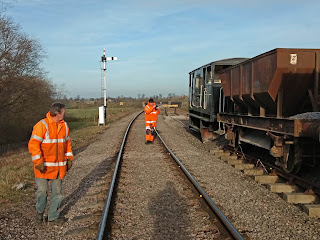 In the final picture you can see Jonathan and Lee guide Neil in the class 73 as the Dogfish discharge and the Shark finishes the job by ploughing the excess into the six foot.

This still needs tamping to complete the job, although we did well today (You've all done very well - thank you, young Mr. Grace).


Monday in the loco shed

A day of sub assembly of the constituent parts of the Broadway footsteps, which are due to go up to Broadway soon. 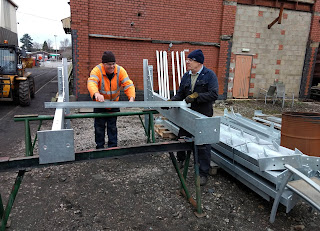 Two of the 4 large intermediate landing supports were laid out in their respective positions, so that the cross braces could be bolted on. This is prior to actual riveting together. 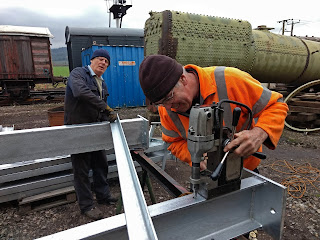 One reason for this sub assembly by means of bolts is to make sure it all fits as intended.

It turns out that the process of zinc plating reduced the size of the bolt holes by just enough to make inserting the bolts (and indeed the slightly bigger rivets) somewhat difficult.

Enter the mag drill then. 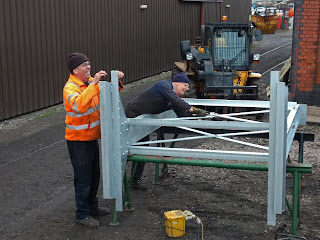 Here is one intermediate landing unit almost complete. You're looking at the top of it from this end.
It was quite difficult to get the cross of strip on between them, and the hole in the middle was very elusive for our bolt to go through. We wriggled it a lot, tried it the other way round, and eventually it all went together OK. 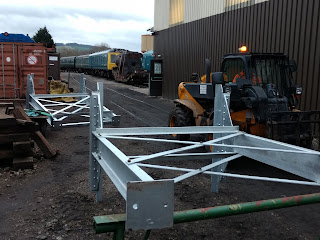 At the end of the day we had both sub assemblies up and running, as it were. Now they need loading on to a flat wagon to take them up north. After we actually riveted everything up, instead of the temporary bolts. That may happen on Friday. 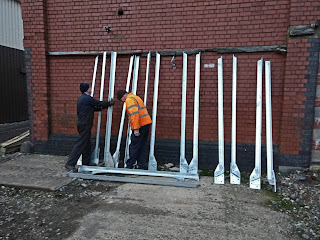 Then we had a smaller kit of parts left over. Ever assembled something from that Swedish furniture store, and had some bits left where you wonder where they went?

In fact these are the constituent parts for the hoops that hold on the corrugated iron roof of the steps. All carefully lettered before zinking, sure, but where are those marks now?

Does anyone have a picture of the date stone on Greet tunnel? And what date was it?