A last minute breakthrough in negotiations meant that the green light was given to make the transport of the footbridge steps to Broadway possible - this Saturday! 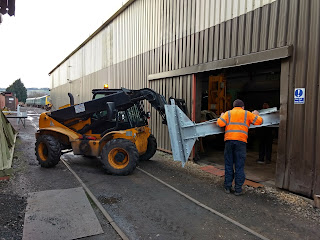 Gulp! And the last we heard was that everything was delayed to March, but great news.

We still needed to do some last minute riveting. Fine, we have Friday for that. But then we discovered that the oxygen had run out. Luckily we managed to get an urgent delivery, so we were on for riveting on Friday.

Here is one of the bolted up intermediate landing supports being manoeuvered into the loco shed. 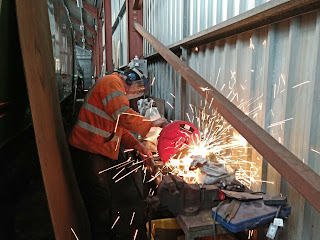 Friday morning, all present and correct, but no gas yet.

Neal takes the opportunity to cut 30 rivets down to size. 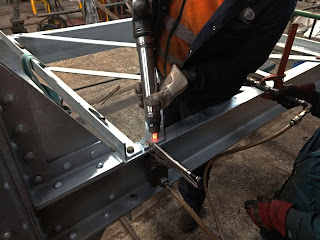 The gas arrived at lunch time, so after a quick snack we were off.

Here is a white hot rivet about to be hammered into shape. 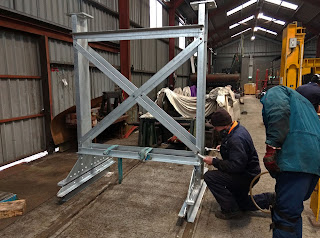 The routine was to undo one of the temporary bolts, ream out the hole (which had shifted a bit, or grown smaller with the zinc coating), then chase a rivet into it. Job done! Very satisfying too. 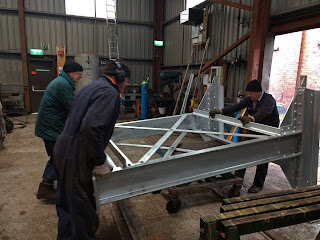 Mid afternoon the first of the two supports was done, and here we are manoeuvering it back out of the shed.

It went a bit quicker than on the way in, we worked out how to do it by then. 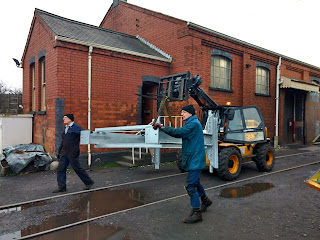 The intermediate landing support frame was then slowly walked towards the ash pit, where a Warflat was positioned, ready for loading. 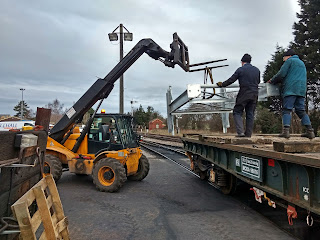 We felt really good about this, the fruits of our labour finally on their way to Broadway. 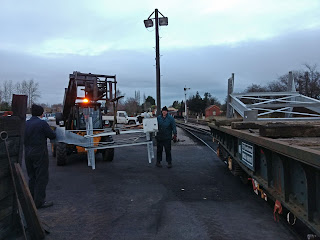 At the end of the afternoon, at dusk, the second frame was also done. This too was loaded on to the Warflat.

There is more riveting still to do, and more to take to Broadway, but what we did today was the largest and most important part. 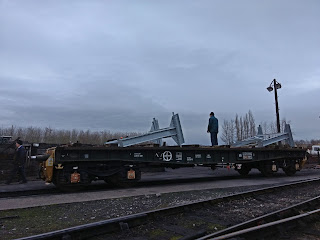 At the end of the day both landing supports were on, ready to go.

When will they be installed? Watch this space!


Saturday on the winter relay

A typical winter's day, wet, windy, but there was a good attendance as we had a job to do. ' I come here because of the job satisfaction, and a sense of achievement' as one volunteer commented during the day. 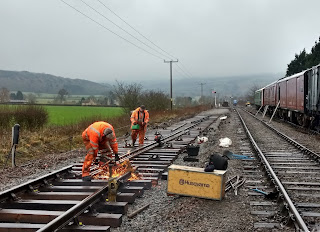 We started on the fifth panel, which although laid still needed the second end cut off, a job accomplished by Chris.

On Friday Stevie, working alone, laid another 4 pairs of rail into the four foot. He wasn't with us today, but left us this legacy. It enabled us to lay the rails straight in, just by rolling them with bars. 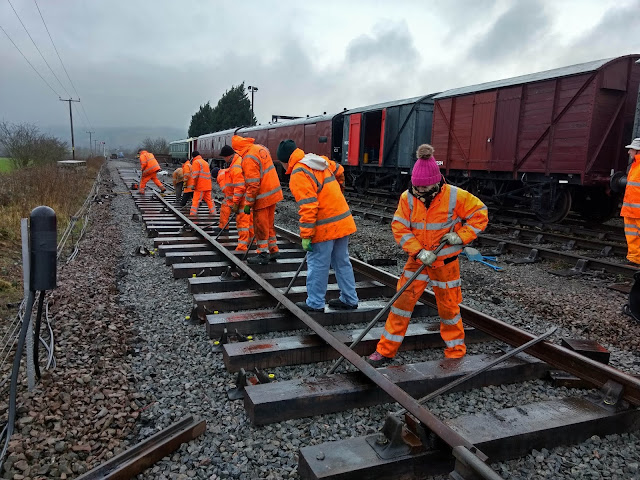 10 volunteers lined with with bars, and on the command their combined forces lifted and rolled the rail into the chairs. Job done! Just like in the old days. 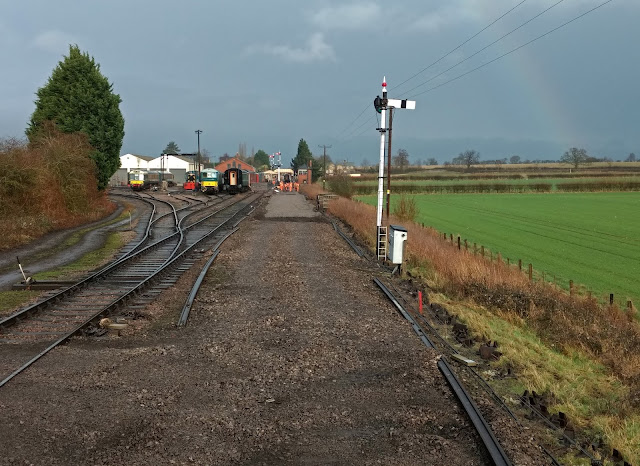 After the miserable, rainy start, things suddenly improved a tad as a hole in the clouds was found and the sun shone through. It illuminated our work site, and made a faint rainbow over Stanway house.

Stevie had also dug out some more old ballast, leaving this final stretch in the foreground. The contents of this we would like to use on the headshunt, behind the camera on the left, which has a sort of ski jump downwards and then carries on well below the level of the main running line.

We hope that the several spare diesel engines on well wagons will be shunted away tomorrow, so that next week we can break up the headshunt ready for better sleepers and a higher base. 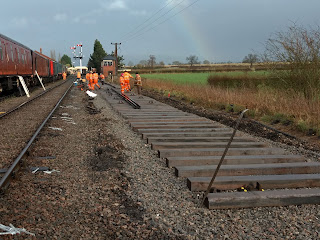 In this picture you can see the fourth of the four pairs of rails left for us by Stevie. Gradually we worked towards the end, tipping each pair into its chairs as we went along. 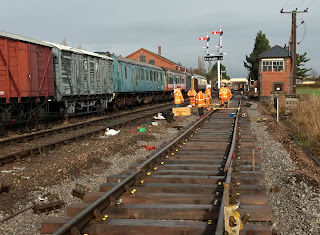 At the signal box end - panels 4 and 5 here - another team was busy bolting down the chairs, as the rails are initially laid with one on every sixth sleeper. The remaining chairs have to be found and then laboriously inserted underneath, usually jacking up each rail end to make room underneath. They weigh 46lbs each.

Peter here and Mike (centre) spent the day drilling fishplate holes where we cut off the rail ends, while Diana carried sleepers from the trolley to the trackbed. All hard work, so a pause with a cup of coffee from a flask is very welcome.


The most forward planning team was that of Mike and Pete, who managed to stop drilling for lunch right in front of the mess coach door. 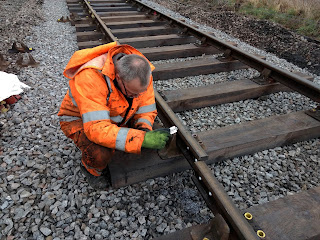 Prior to fitting fish plates, Ade here measured the wear on each rail and wrote the result on to the nearest sleeper using just a nail. Hope it's still legible next week. 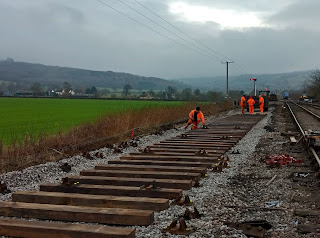 The sleeper laying team went great guns. After unloading two one ton packets off the trolley, a change in the method was tried and this time the packet was brought with the Telehandler, and unloaded even nearer to the job. Good idea, that one. 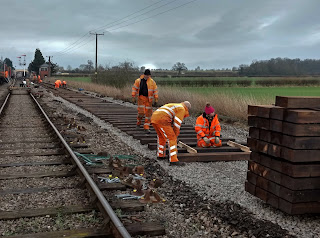 On the right is Alan with the Telehandler, while David and Tim unload the sleepers and Diana repositions the gauge each time.


After many holes were drilled by Mike and Pete the fishplate team followed on. As you can see though the chairs are not yet bolted down or keyed up, so this will be a job for next Wednesday. 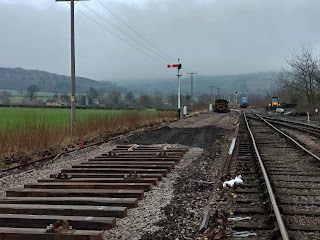 The state of play at the end of the day. Sleepers are laid out as far as the new ballast permits, so before we dig out the rest that headshunt (visible with the blue tarpaulin in the background) needs to be cleared for a while. Then the remaining spent ballast can go straight in.

We ended the day having laid the 11th pair of rails, out of the original 20.


On the way back to the car we spotted this skip by the loco shed: 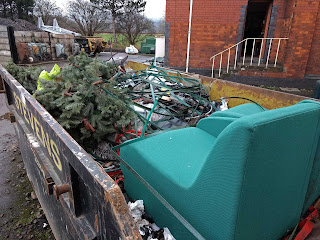 This skip of general loco dept waste always fills up quickly, this time with plastic Christmas trees and bulky items of furniture. Are you letting the company pay for what you could take to the local tip for free?