Stone blowing on the horizon

The heat continues; it seems to be weighing on our numbers. We had another 27 degrees today and it was very muggy, adding to the warm feeling.

Mrs Blogger fulfilled her promise and made a second 'cake', in fact a tin of Rocky Road, all chocolate, biscuits and marshmallows. That went down extremely well with the morning's tea.

Then we were off to Gotherington Skew bridge, to prepare for a dose of stone blowing (possibly next week) by digging out the dipped joints that had been reported here, and along the straight at Manor Lane. 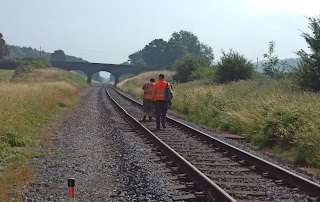 It was a low and strong sun today, a bit awkward for photography along the line. Here are Nigel and Tim just approaching a dip, which you can make out on their left. Ahead is the famous 3 arch bridge, a favourite place for photographers.

Well, were were underneath, trackside. 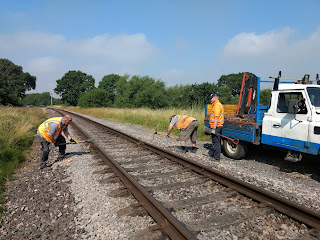 Stone blowing involves lifting the track back to just above its normal height, then using compressed air to inject fine ballast. Obviously, in order to inject the stone underneath the sleeper, you have to be able to see the bottom. So here we are, digging out sets of sleepers under track joints. Happy days ! 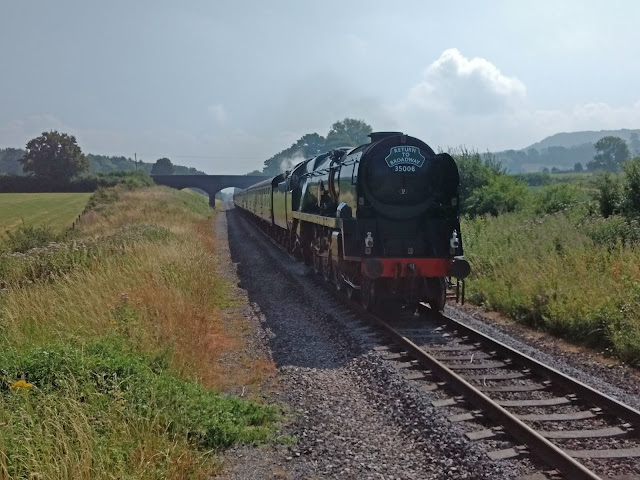 Not for long of course, because there were two kettles out today, and the first soon interrupted our digging activities. It's the first (nearly empty) train out to CRC, here hauled by 35006 P&O. 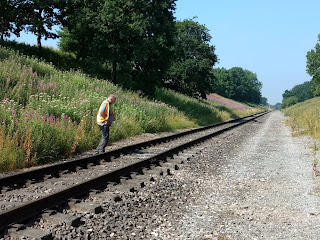 We do all this by eye, there is no measuring required at this stage.

We identified a dipped joint, and Bert lay down on the track and gave us an estimate as to how many sleeper beds to excavate, ready for the stone blower next week.

Then we dug out the beds around it, so that when we do the actual stone blowing, we can concentrate on that activity alone. 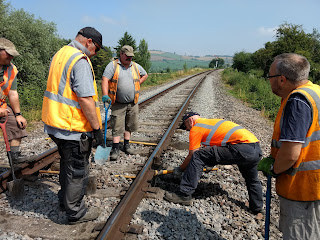 After identifying and digging out 2 or 3 sites at Gotherington, we moved on to Manor Lane on the other side of the station. By now we were 6, with Dave and Ade joining, at least for a while.
Insulated joints seemed to dip more often than plain ones. Here we are digging out an insulated one, which you can see by its yellow pipes protecting the S&T wires for the block. 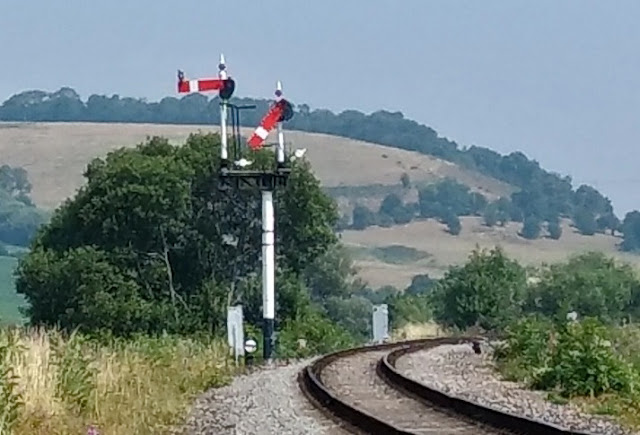 While we waited for the next train movement, a buzzard flew over and chose as a useful perch the Gotherington bracket signal... That's quite a big bird there, but the distance was quite big as well, it's zoomed in here in the picture. 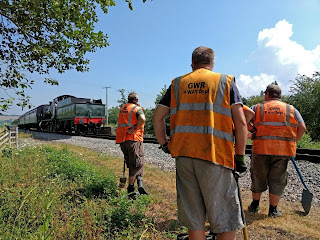 When 2807 came by tender first, we had just reached the Manor Lane access point, which thanks to its shady trees would also be our lunchtime picnic area. 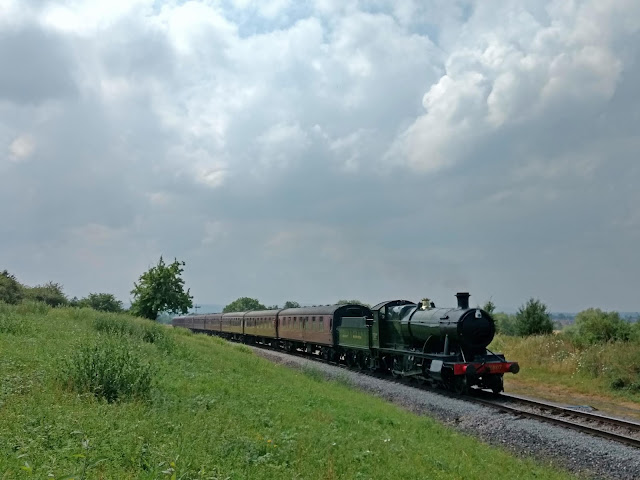 There were quite a few clouds about, and the air was hazy with the Malverns hard to make out in the distance. Unfortunately the clouds never built up quite enough for a cleansing thunderstorm. 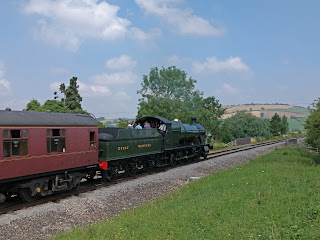 2807 then headed past our picnic site.

It was very hard work today, armed with mattocks and shovels, digging holes between the sleepers. 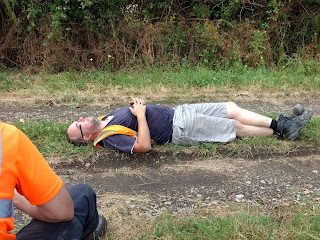 As we didn't have any folding chairs with us (we are not wimps) the best we could manage for ourselves was a nice stretch on the approach road from Manor Lane.

Of some hindrance to us was that this area had oversized stone ballast dropped on it years ago. You can't shovel big stones, they just cause the shovels / mattocks to slide over them. They are also poor at holding the track, as with bigger stones, you get bigger voids between them. Some were as big as grapefruit. 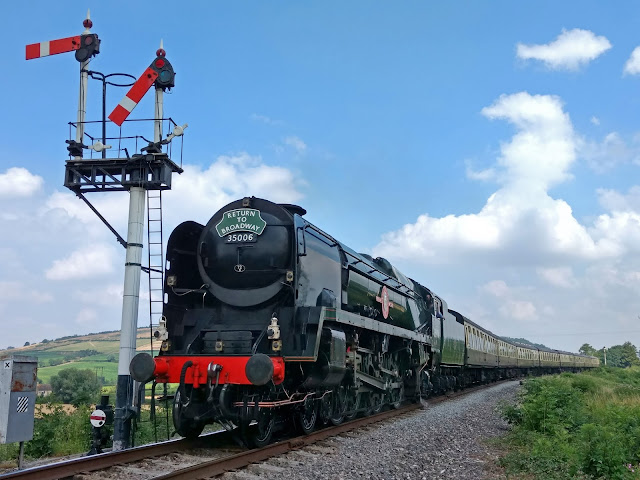 Our favourite photograph today came just after lunch, as P&O headed south out of Gotherington.

The first up train today, we noticed, had a face at every window, but there were seats still available in each compartment or table. No one had to stand. So that seems OK. 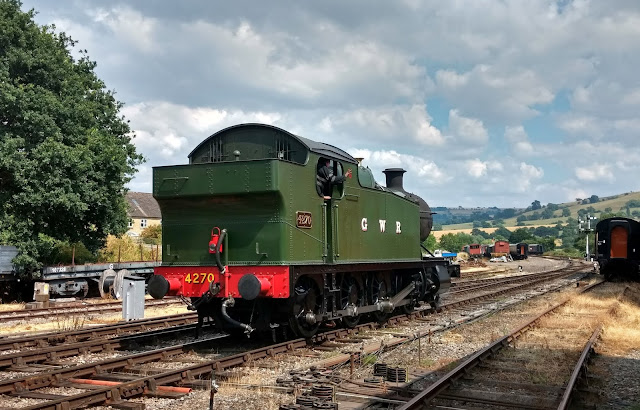 Our Welsh large tank loco was at Winchcombe at the end of a test run. All looks well - here she is, off again towards Toddington. 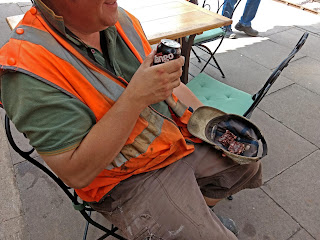 We closed the day with refreshments at the Coffeepot.

Some remaining Rocky Road from Mrs. Blogger remained in the tin, but not for long. A volunteer was found willing to take them home - in his hat.

We had a small gang out on Monday, another hot day. Well, they all are at the moment. 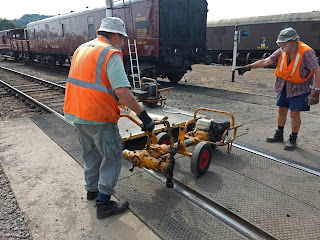 Having pushed our TB2s and trolley out to the start of the section to be greased for the first two weeks, we are now faced with a longer journey and pushing isn't really an option any more. Now what?


The ingenious solution was to use the little transport wheelset to take them up to a Permaquip trolley. This was hooked on to the Landie, in rail mode, and propelled to the site (at the end of the Defford straight). 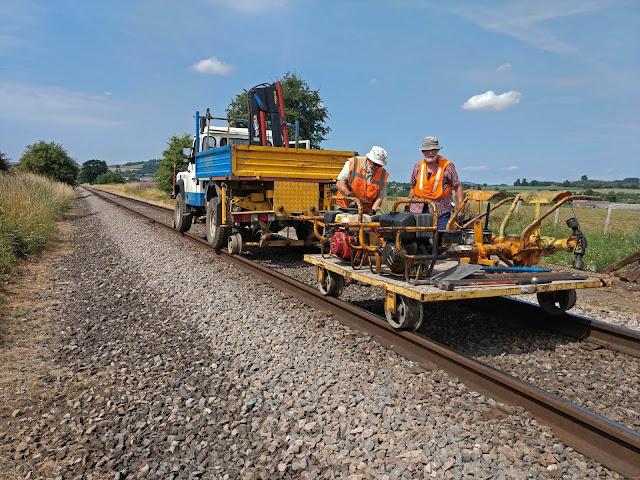 We cautiously propelled our little 'train' out to the start of the next section. Just 3 of us again, as you can see. We can actually do it with 3 we have found, but it's so much better with a few extra hands. 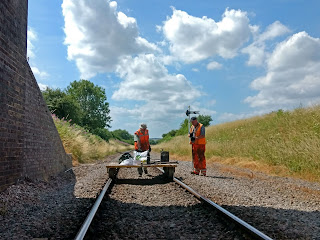 Our pleasure then was great when, reaching the end of the next stage at Hayles Abbey halt, we were joined by Bert Ferrule, whose mere presence boosted our numbers by an amazing 33%.

Thanks, Bert, it made a big difference and was much appreciated.

Here we are about to break for lunch under the shady road bridge at Hayles. 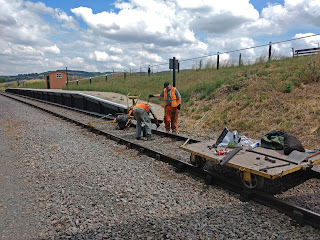 This is as far as we got, the end of the platform. Next Monday, Didbrook, then Toddington and that could be that!

Although the Hayles platform shelter (ex Usk) is certainly shady, it is also very hot inside, so despite the comfy looking bench in it, we preferred to sit on the trolley in the breeze under the bridge.

We had a rare visitor in the sky at Broadway: 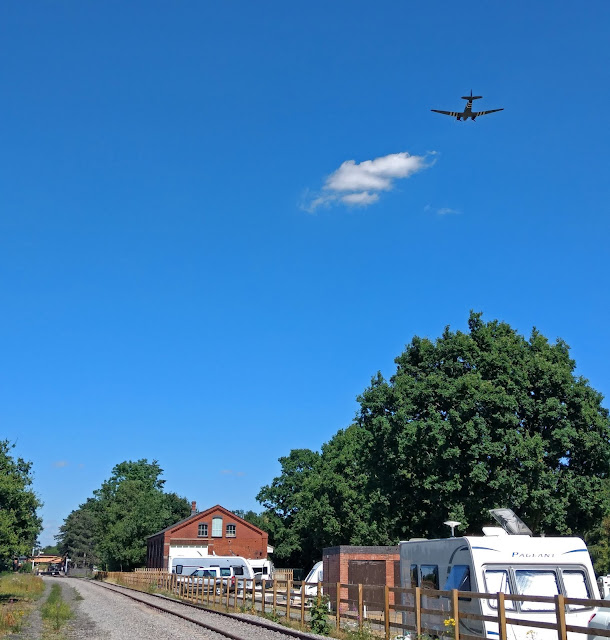 It was Dakota, with invasion stripes under the wings. It flew just to one side of the station and village, presumably to give its passengers a sideways view out of the window.

And then it was gone again... 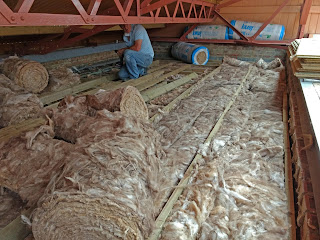 Back at the station itself, work continued on Friday under the roof. In the rush to get the station ready enough to start earning some desperately need hard cash, we were asked to concentrate on the ticket selling and lavatorial side of the business, leaving the roof for a later date. And this is now. 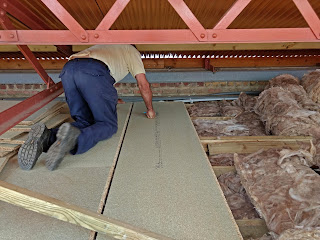 Broadway station is a 'shoe box' under an umbrella, that best describes the building and its canopy. The top of the shoebox, while perfectly dry under the canopy, was not yet finished. The insulation - 12 inches of it - needed to be placed and then covered with chipboard sheets. Originally there was just planking and no insulation. This is modern stuff then, but completely out of sight.

A story we were told by the children of one of the original gangers here was that he liked his drink and kept the supplies up here on the roof space, away from prying eyes. The empty bottles were flung under the trees along the drive, where we did indeed find a few. 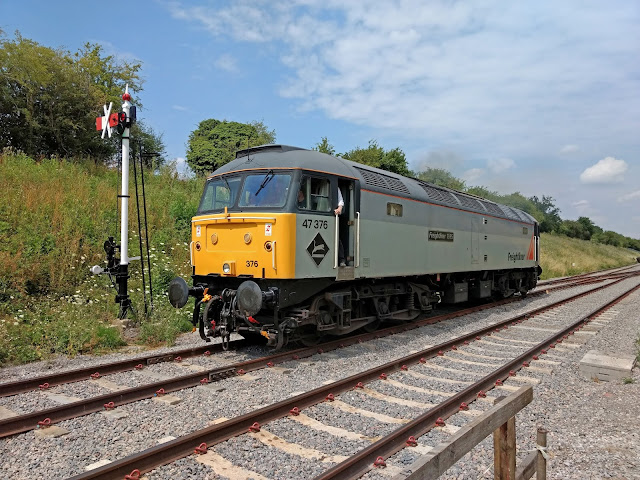 As we worked away under the roof, finishing about 90 % of it on Friday, a diesel driver experience rumbled in.

A video of the train leaving again is available here:
https://youtu.be/Y56OTtrDQns

Cast GWR style letters have been ordered for the next V boards that are still left to be made: REFRESHMENTS, WAY IN, WAY OUT and OVER FOOT BRIDGE. From the text you can guess that we are thinking ahead to include what is required for platform 2. We were able to lend the foundry almost all the original letters that were needed for this, thanks to our growing collection of cast iron GWR letters. If anyone has any for disposal, or would like to swap, we'd be interested to hear (breva2011 at hotmail.co.uk.). We have some spares in both 4 inch and 12 inch sizes. 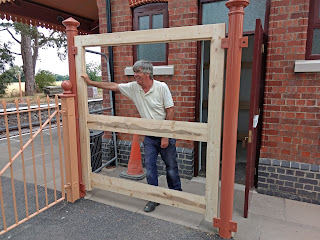 Finally, Neal has made some progress with the Gent's modesty screen for the south end of the building. Some fettling of the angled brackets is required, we discovered during this trial fit.