Gee, you you guys really are on fire 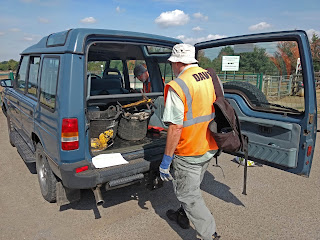 Once again, no PWay transport today so (almost) everything was shoved into the back of Dave's Disco, with just the wheelbarrow in your blogger's estate car.

Dave refused point blank to accept the open tin of black oil as well, after on a previous trip it fell over on the back of the Landie. Eeeeuch..... So, no oil out on the track today... 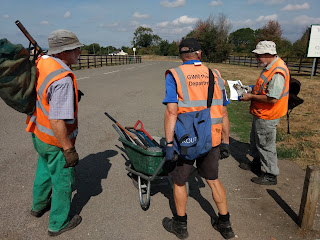 We were back out at Southam, continuing from last week's job of fault repairing southwards from Bishops Cleeve.

Here we are at the northern entrance to the Race Course, where there is a parking opportunity (and a bit of a walk, but hey, we have a wheelbarrow today, thank you, Dave).

Dave also has the master plan in his hands. 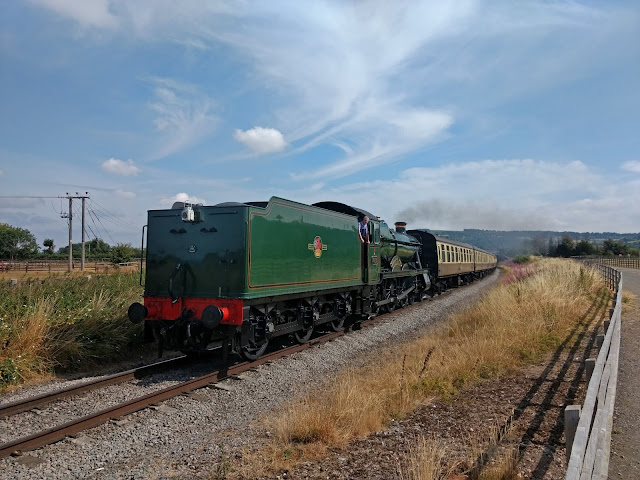 Just as we arrived at the well known spotter's location of Riders For The Disabled (RDA) Foremarke Hall trundled by with the first train for CRC. That's the very busy one. 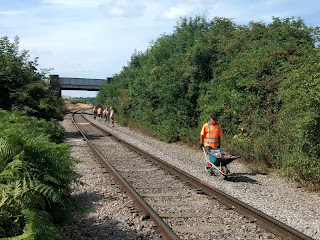 We walked down to the RDA crossing, entered the trackbed, and then walked back towards Southam, where we left off last week.

Here is our plucky little group, walking all the tools (and in some cases, picnic and folding chair; priorities, dear reader, priorities) to the start of the works. 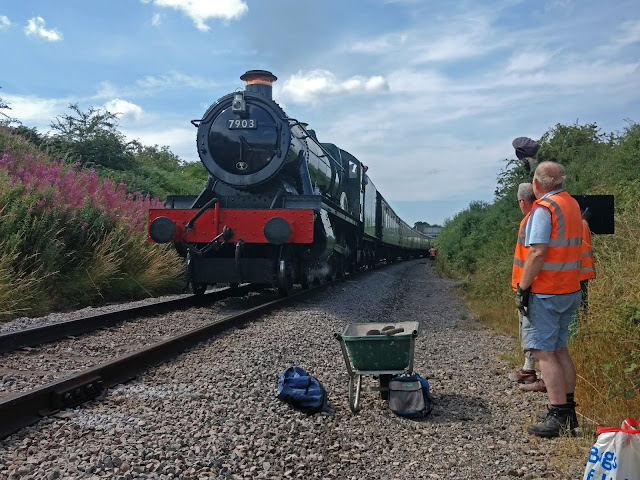 The very first job we did, to replace a broken 'biscuit', was also the hardest. There is a reason the plastics are broken - back when the track was laid and some sleepers were not exactly in the right place for the biscuits to drop in easily, the plastics were rammed in with a hammer.  Years later, you end up with cracked biscuits (plastics) and of course the sleepers still 10mm out of position.

We dug out the offending sleeper and managed to manoeuvre it along a bit, just far enough for a new plastic biscuit to go in. Then Foremarke Hall left CRC again, so we had to step aside. 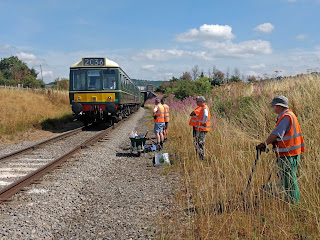 After that we made quite good progress, being caught up with the DMU working a bit further south of the bridge. Note the white sleepers on the left, not a good sign. 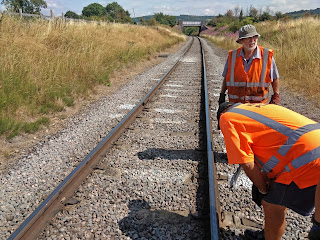 While Martin inspects the next missing clip (a forensic examination in each case - why is it missing, what has caused it to fall out, what is wrong here) the same shot shows a whole row of white sleepers, with a big white area at the end of the length. All this points to poor drainage and a shallow ballast bed. The track is pumping water out, which causes the white stains.


We decided to await the return of the DMU before addressing the next bit, just along from the RDA crossing where three of us are standing here. 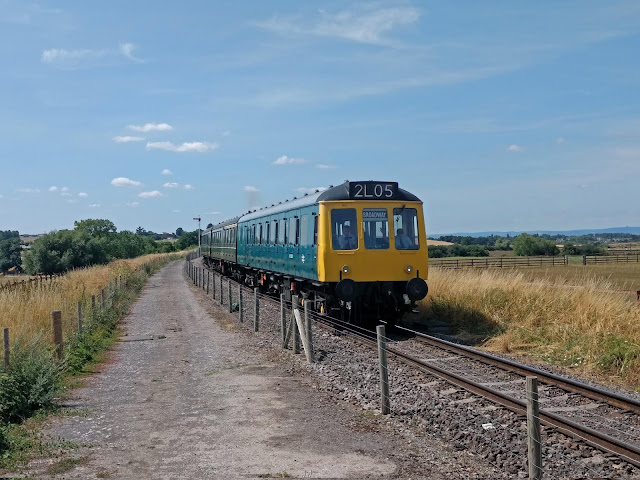 Here's the DMU then, picking up people from CRC who didn't get on the first steam train. We noticed a coach tour from Germany in the CRC car park, our fame stretches far and wide. 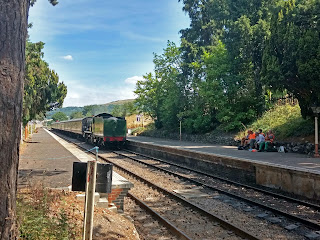 As we rounded the Southam curve we saw the home stretch before us - CRC with its tea making facilities and ice cream fridge in the distance. It was unanimously agreed we would stop for lunch there.

We bagged a shady bench under the trees and waited for the kettle to come back. It had a bacon butty facility on board, we knew... 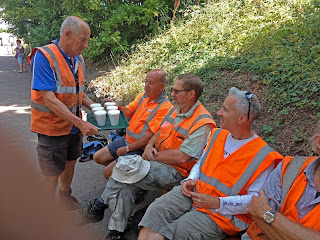 Bacon butty secured, we moved on to tea, generously sponsored by Rick with a tray. Nice place to sit with tea, Cheltenham Race Course station.

A Passenger then approached us with the news that there was a fire on the track.

Golly, it was true as well, but just a small one. We did a Mexican hat dance on it, and the pine cone and needle fire was soon out. Little did we know, but it was a harbinger of greater things to come...

As we drove back to the RDA crossing in Dave's Disco, we noticed a cloud of smoke in the shallow cutting between RDA and Southam bridge. Surely not? 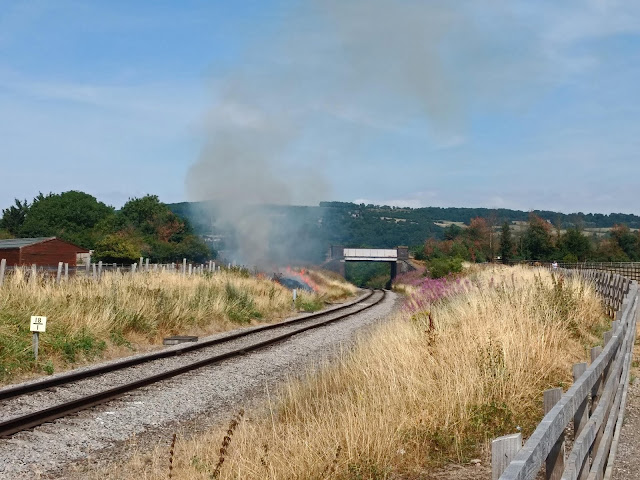 But it was indeed true, the bank was on fire, it was well alight. What to do?

John R had remained on site and was already on the case, phoning the fire brigade as we arrived. We jumped out of the Disco and grabbed our shovels.

By ducking down low under the flames we managed to get in close and beat out the nearest row of flames. Cheered by this success (have you ever put out a grass fire before?) we moved on to the second front, which had quite big flames, which were being fanned by the 'gentle breeze' promised in the weather forecast for today.

We beat that out with our shovels too. High five ! 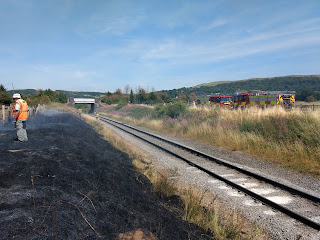 Once we had beaten out the fire both ends, two fire engines arrived. They were pretty quick to arrive, well done those lads. 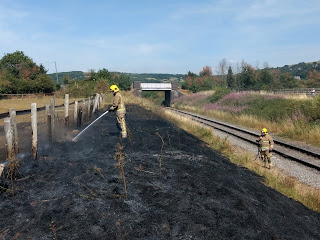 The fire brigade hosed down the site, and in particular put out the burning posts, which we were unable to deal with. They were dressed in full gear and it must have been so hot inside that. 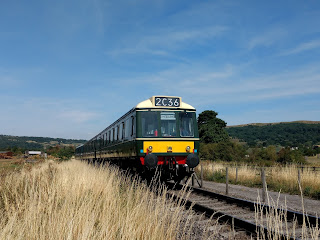 Afterwards the DMU arrived very cautiously (we did not want a bill for sectioned fire hoses) and passed the site without incident. 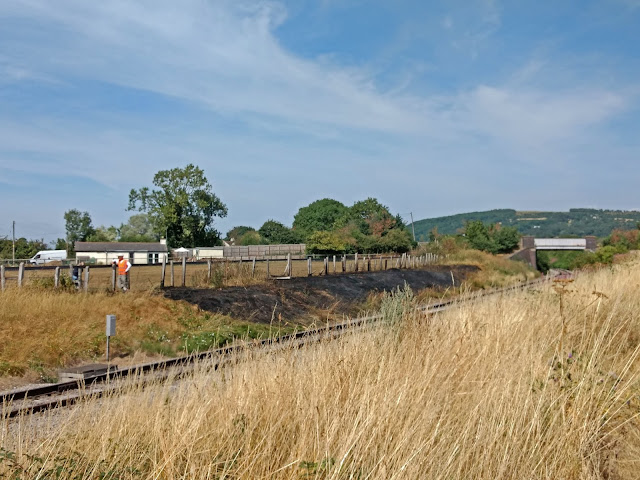 Here's what burned today. Just bone dry grass, but the heat and the breeze made for ideal circumstances. We were able to prevent the fire from spreading to the adjoining stable for RDA, and the ladies there came out with buckets of water and even borrowed our shovel to beat out a small incursion.We all worked together to beat it, and there was no harm done.

One of us seemed to linger for quite a long time afterwards, and we think a new friendship was struck up. Every fire has a silver lining, as the saying goes.


Monday on the track

Our usual gang of 3 was on the prowl again. There were a number of seized bolts still to tackle, one on Chicken Curve and the others in the tunnel (Yes!) so we got our trolley out and loaded it up with the generator and tools. 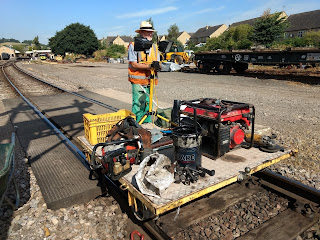 Here is John with the genny and lights, ready to go into the tunnel. Actually, we went north first, to do that seized bolt on the curve. 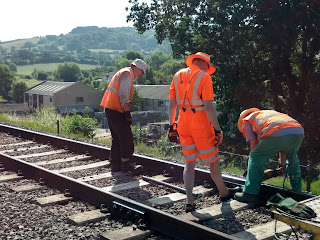 That one wasn't too hard, it just needed cutting off and replacing. Weird, that there are so many bolts which are seized, about one turn away from being fully tight. 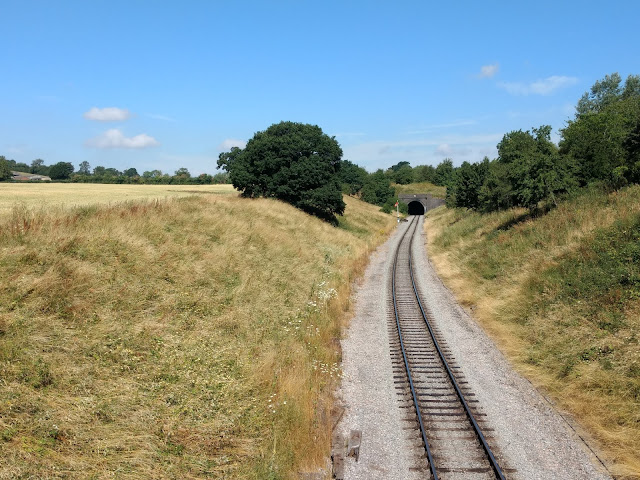 Then it was up to the tunnel, which you can see here from an unusual vantage point. The picture was taken from the bracket signal, which was also used to photograph the adjacent property line following the construction of new housing there.

Imagine how all this was excavated in 1905 with the Ruston Dunbar steam shovel. 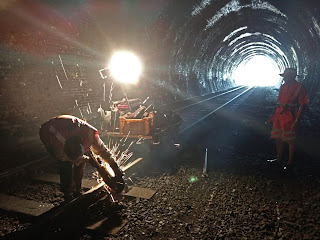 The tunnel was great. Even before we entered it, there was a wonderful wooosh of cold air coming out of it. Hmmmmmmm.

Inside, we cut off several seized bolts and replaced them with new ones. Here is Dave on the angle grinder, watched over by Jonathan on the right. The trolley has two powerful lights on it, run by the generator. 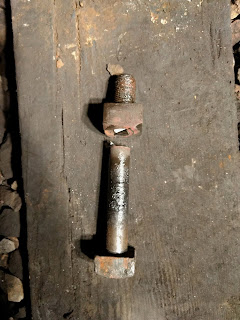 Here is an example of a bolt we cut off.

On closer examination it appeared that, while it was fully done up, The unthreaded part was too long, so it never had a chance to be fully tight.

Check out also the length of thread protruding from the top end, that's too long to be normal. 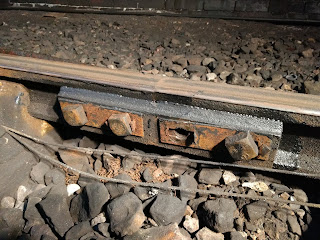 Another reason why we couldn't tighten up some bolts. 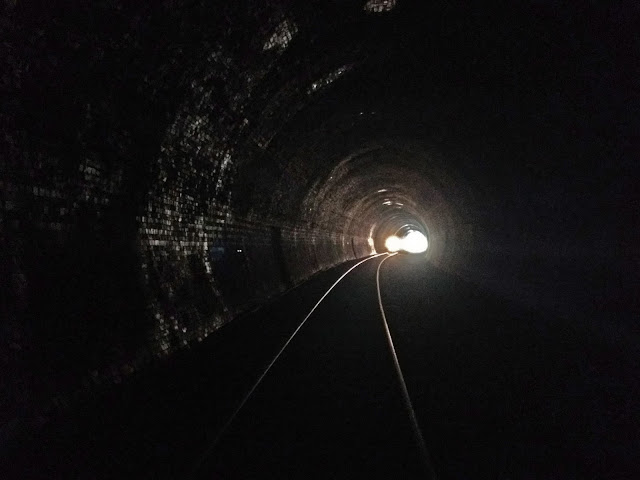 If there is light at the end of the tunnel, it may not be the other end, but a train coming your way!

Actually of course, it's the trolley with the genny and the lights, fear not. Yet this tunnel claimed the lives of 3 track workers at the end of the 1920s. We remembered that while we worked in there... 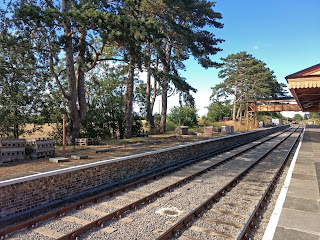 More troughing has been removed from P2, quite a big lot this time. The stretch between these two lamp posts was cleared on Monday, using a wagon and the class 37. That's about a quarter of the troughing gone now, more to come. Great stuff, it makes the place look so much better. 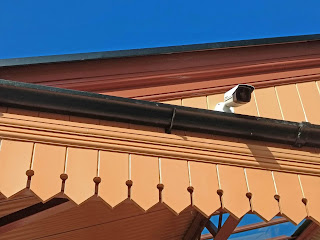 More security cameras have been fixed to our 1904 canopy, both inside and out. Surely a more elegant solution could have been found, than to just bolt them on 'in your face' on the end? 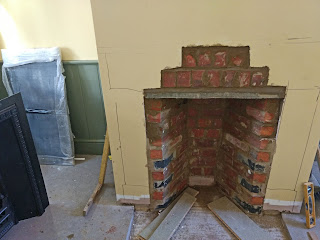 Inside the cafe the fireplace has had the back bricked up to reflect the shape of the insert from behind.

On top, a lintel was placed, and the gap with the concrete blocks that were there filled in. 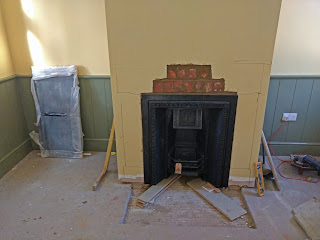 Next, the insert was tested in situ.

This is just the metal bit of course, what we could find that most closely resembles the original that was used about our railway, several to a station. This insert once had coloured tiles for decoration, but we have asked them to be replaced by slate panels. Works quite well, don't you think?


From the pencil lines outside you can see that two uprights are still due to go in. Then there is a slate panel across the top, and finally a mantelpiece across the full width.

The new slate hearth is on the left, still in its wrapping. That goes in the gap at the front.

Meanwhile, our friends at C&W have drawn up a plan for a counter for the cafe in Victorian style. We were excited to see that they had also thought of a large panel for the rear wall, with shelving left and right of a central mirror. That should look great !

John Rogers has secured us this aerial shot of the fire at RDA: 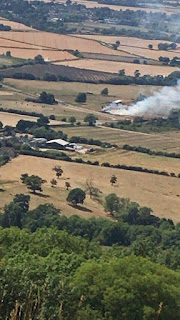