A day at Bishops Cleeve today, and a birthday.

Sadly, due to your blogger's birthday, the average age of the PWay gang went up a notch today.

It was peanut and chocolate. It was a test: if successful, another birthday cake will appear on Saturday!

We can report that the cake did indeed vanish, despite apologies for peanut allergy and diets. Others very kindly jumped into the gap and consumed twice their share.

We decided to continue with our fault finding mission on the southern half of the line. Last week we reached the northern breather at Bishops Cleeve, so to Bishops Cleeve it was. All aboard! 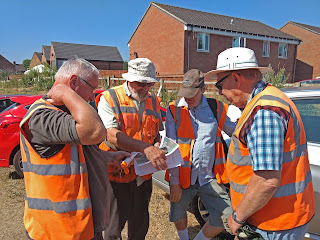 Bishops Cleeve is surrounded by new housing, and the station site was sold years ago. The railway today is just a double track channel through the middle. There's a wee bit of space by the foot crossing, so this is where we parked the cars and the Landie. 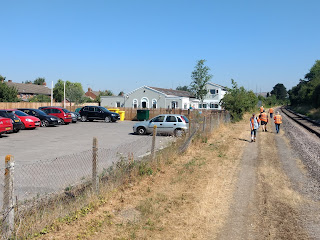 We decided that all of us would repair to the northern breather, located a bit north of the road bridge at the far end of the former station.

On the left is the former goods yard of the station. Years ago now already the British Legion built a clubhouse there, and a couple of years back it came on the market and was bought by a nursery, which made a very good job of fettling up a fairly dire building.

The GWSR had a crack at acquiring (part of) the site, but was outbid by the nursery. We are not rich, sadly.

The local village site has two good pictures of the former station. Have a look at this one:
http://www.imagesofbishopscleeve.info/Old_Pictures/image213.htm

It's taken at the same place, but looking in the other direction. The passenger station was at the back of our picture above, by the pine trees in the distance. So the British Legion site would not have got us back our station anyway; it's covered by housing already. At the breather, part of the CWR laid here to give the residents a quieter experience of the railway line, we split into two teams. One went south to continue fault finding; the other addressed a problem with the breather and would then work north to replace some failed fishplate bolts. 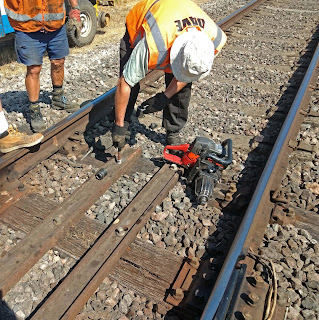 The breather had a loose base plate bolt (tightened) and a loose bolt on the two short lengths of rail that hold the breather together.

That was a bit more tricky, as the bolt was spinning and it would normally need an insert. 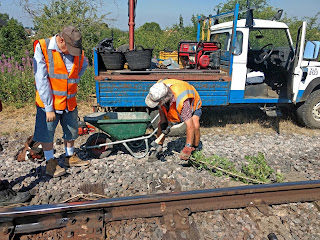 The steel coil insert would not go through the hole in the old rail, and with the hot weather we did not think it wise to remove the rail. The best fix we could devise was to fill the old hole with a piece of sapling, and then  screw the chair screw back into it. 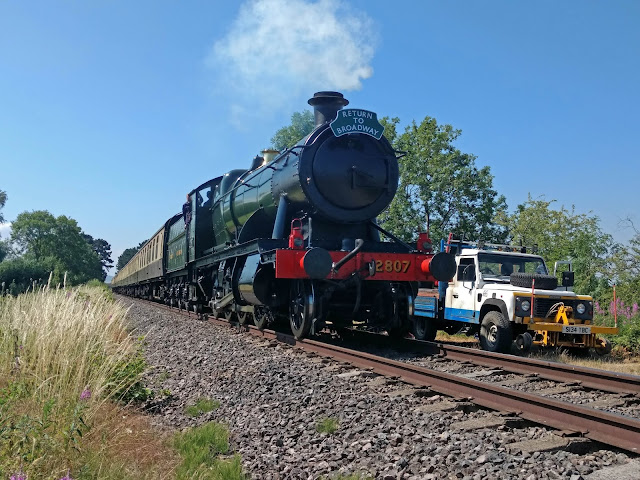 Just step aside for a moment to let 2807 through, with the first full train from CRC. Generally speaking the trains looked filled OK today, including the DMU, which provided the second train that was about. 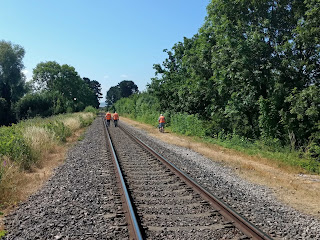 The fault finding team loaded their gear into a barrow and started to walk south. That barrow was loaded up with heavy stuff, and we wish we had a second Landie for this sort of requirement. Now it's a lot of old men pushing heavy stuff along in a wheelbarrow. 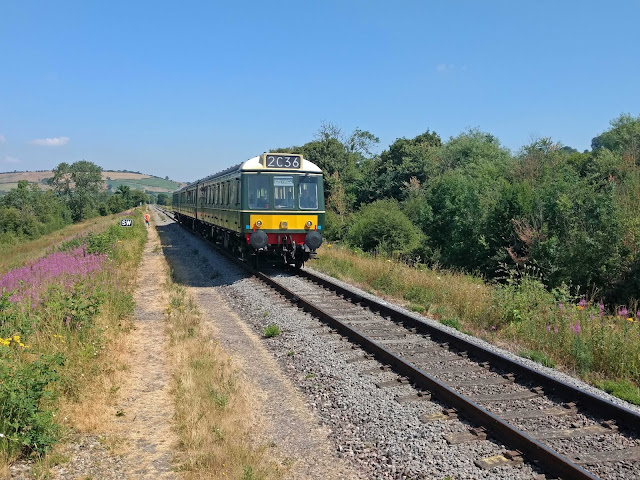 Steam loco 2807 was followed  by the DMU, which seemed to feature in quite a lot of pictures today. Probably because the loco was running with its tender facing south, and with the strong sun a shot to the north (looking at the end of the tender) was the best photograph available. 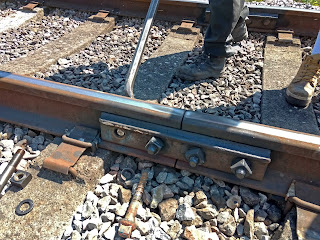 Having addressed the breather, we moved further towards Gotherington and eventually found the loose fishplate bolt that was reported. We failed to find the neighbouring one, said to be located in the next joint. Must have been tightened by the track walker then.

If you take a closer look at the bolt (which we decapitated, as the nut was spinning) you can see it is off centre in its hole. That's bad news. We managed to knock it out, but the new bolt would not go in unless we hammered it, thus rendering the thread useless again. 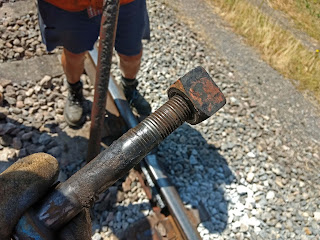 Here is the bolt that we took out. The problem is not the wasted thread at the bottom, but the two lines of thread nearer the nut. It was here that the nut was spinning, having stripped the thread.

How, we do not know.


We solved the problem by loosening the other three bolts, and then knocking one of the fishplates sideways with a keying hammer. It was a great feeling of victory when we got the new bolt in, without damage. Another problem solved! 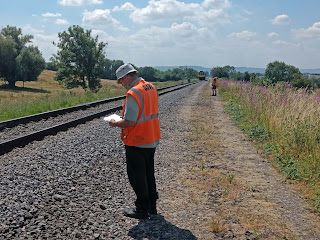 Where next? Dave studies the spreadsheet, as the DMU approaches in the distance from Cheltenham. 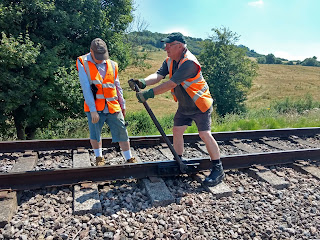 Another set of loose bolts a bit further along was easily addressed by tightening up with what we call a 'hand' spanner. It could just as easily be a simple spanner, but we also have motor driven ones (the lovable 'Animal') so hand spanner it is, to underline the difference. 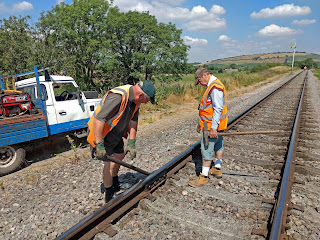 While were at it, we did both sides, you never know. We're still close to Bishops Cleeve here, but you can't see the new housing estates because of the trees, so it still looks all green here.

Note also the Genny on the Landie. This is a really useful machine, which we use to cut through the seized bolts with the 115v angle grinder 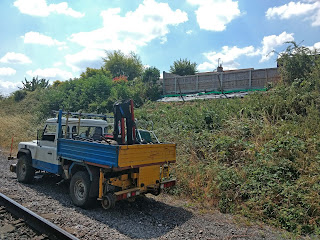 South of Bishops Cleeve, evidence of activity from a neighbour on our side of the fence. The fence is right on the edge of the cutting, and the neighbour has been on our side to lay down some sort of Terram, part way down the slope towards the track. 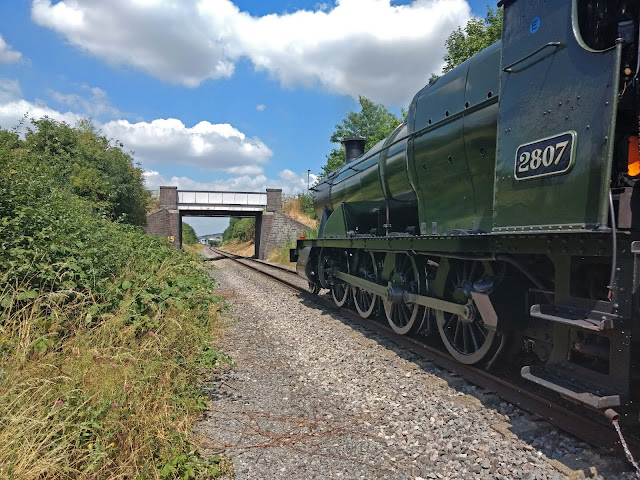 With the sun requiring photographs looking north, we took this picture of 2807 about to enter the site of Bishops Cleeve station.

What a lovely locomotive, with its polished motion. 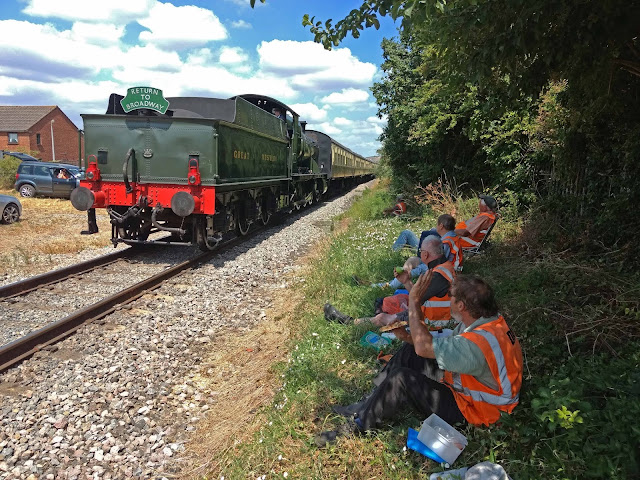 We stopped for lunch by the foot crossing, where we found a shady spot from which to engage in loco spotting. 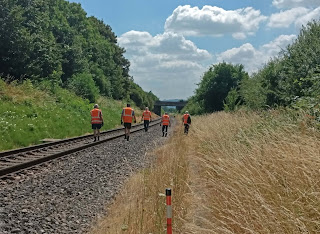 After lunch the gang united and walked south, after losing a few members on other duties. 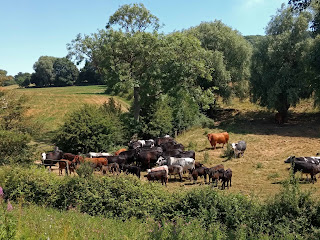 The Cotswolds side of the line is still intact, with no housing estates visible.

This herd of cows came to protest loudly at something, but there was nothing we could do to help. It was a mixture of milking cows and their calves. Not a good combination to approach in a field, the mothers are very protective. 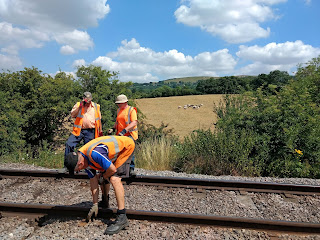 Further south still from the conurbation that is Bishops Cleeve, we can see Cleeve Hill at the top here, and another herd of cows in a very dry meadow. 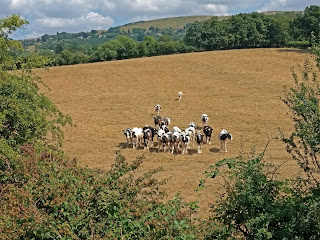 When they saw us, they all came cantering towards the hedge, moo-ing loudly.

We were clearly expected to provide something, but what?

Right at the top, John informed us, was a former hill fort, whose outer defensive ring was interrupted by quarrying. Fascinating. 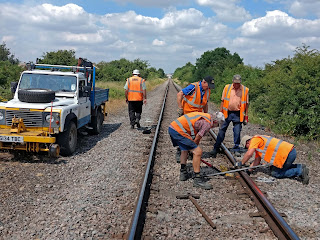 With Bishops Cleeve now receding fast into the distance, we replaced out last set of clips and pads here, using the trusty pan jacks.

Or Land Mines, as they are also referred to by some. 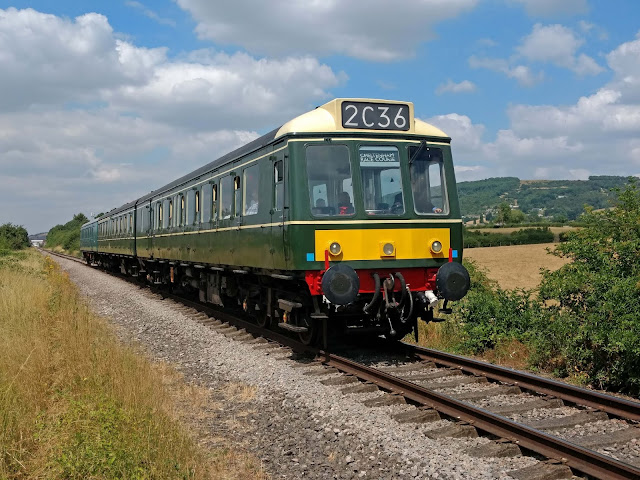 We said it before, but that DMU featured a lot today, because with the sun behind us we had to look north and the sole kettle today was tender first this way.

Quite a few people were in the DMU today, which is good news. Were they just travelling from A to B?

Before we go, news of a brand new project from the railway's Heritage Group. A long gestation period after the completion of Hayles Abbey halt has finally come to fruition.

Read all about it here, in the revamped Hayles Abbey blog, now retitled: Heritage Herald Blog.