The basic trackwork is in - and a surprise!

Today we took the class 20 and the mess coach up to Childswickham again, accompanied by the class 73 for a test run.

The purpose of the day was to clip up the track along the goods shed, and to lay in the last 4 rails on the through road and loop, which would finally link the two rail heads we have been working on.

Our secret mission, alas betrayed by BAG's webcam, was to enter the platforms with the entire double headed train. But first we had to get those last rails in, and there were 8 panels to clip up too. 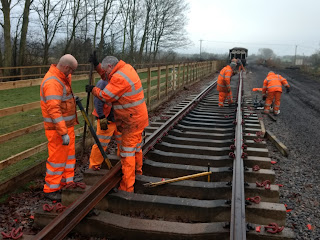 There were two gangs clipping up, both of which can be seen here.

In the background is the 'whistling wardrobe' and the 6 Dogfish, 5 of which were filled with ballast (one had been emptied previously on another job). 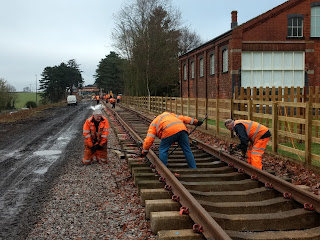 Getting the Pandrol clips in looks easier than it is, mainly because recalcitrant sleepers are often far below the floating rail above, and when you try to lift them up to meet the rail, they move along a bit. Just enough in fact to frustrate the clip you were about to put in. Chris here has sunk to his knees in frustration. 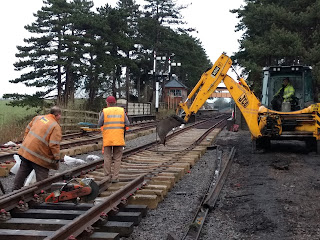 At the other end of the site the main gang - here Nigel, Ivor and Stevie - were putting in those 4 missing rails. The first of the four is in, and now it has become clearer that the track in general isn't quite where it should be. It needs 'tweaking'. Steve here is giving it a go with the JCB, pushing it Malvern side, and often the subject of countermanded orders, 'now back the other way'. He was very patient with us. 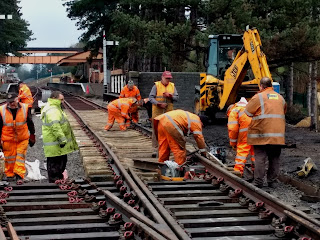 Then the second rail went in, and in the picture it's just been cut to size.
You can tell that it's a cold wind out there today, because Stevie has appeared with an enormous yellow coat on. Gone are the shorts. It's official, it's now winter. 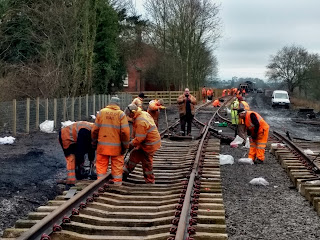 Both rails then are in, and are being clipped up, while Nigel records the moment for posterity: the through road goes right through, it's all connected up.
But not yet quite ready to run on, look at all the orange jackets in the background - they are clipping up the 8 panels. 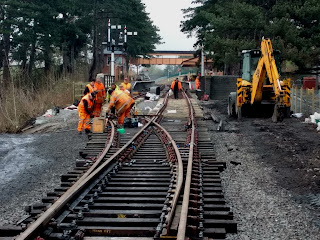 This view of the through road, the old down line from Honeybourne, shows that it's got a straight bit in the middle where there should be a continuous curve. This will be sorted out later. The main gang is now looking at the other two rails, the ones that will complete the loop. 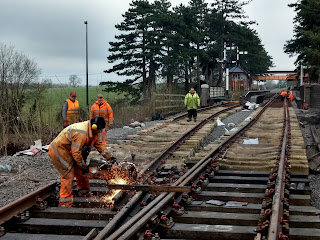 As we are now laying the final two rails, they can't just be slapped down, they have to be cut to size.
We've also dragged over the row of concrete sleepers near the end, which last week was still pointing in a straight line south. 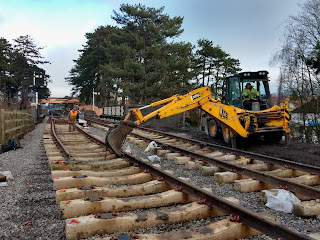 While the clipping gang works as fast as it possibly can, behind the camera, Steve tweaks the end of the loop into a nice round curve, directed by Ivor. Other PWay gang members seem to have drifted off - it must be lunch time! Now where is that mess coach? 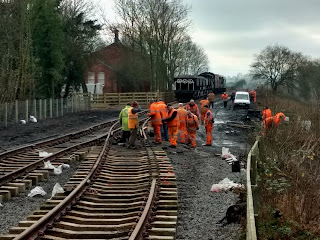 While we were discussing the last length to go in, the whole train, consisting of 6 Dogfish, a Shark, mess coach and box van, the class 20 and the class 73 slowly comes trundling up. The gang members turn around, incredulous. Could it be? 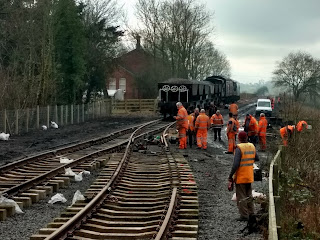 Everyone steps back - it's true, we're going to have a go at putting the whole train in the platform of Broadway station. 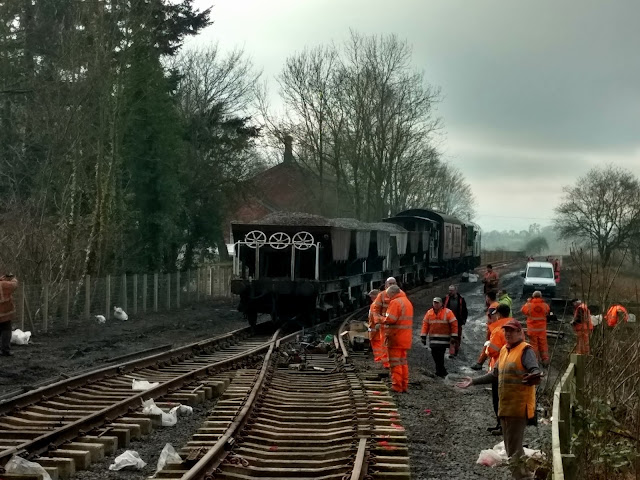 The PWay train looms ever closer. Ivor, front right, can't believe it. A hundred tons of ballast are slowly pushed over the final stretch, laid only an hour ago.

Here is a video of the very first train ever to reach Broadway, GWSR: 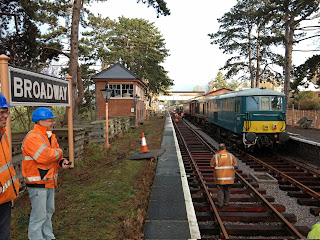 The train comes to rest in platform 1, opposite the station building. Two members of the Broadway group have come out to watch this momentous event. Look at the delight on their faces! 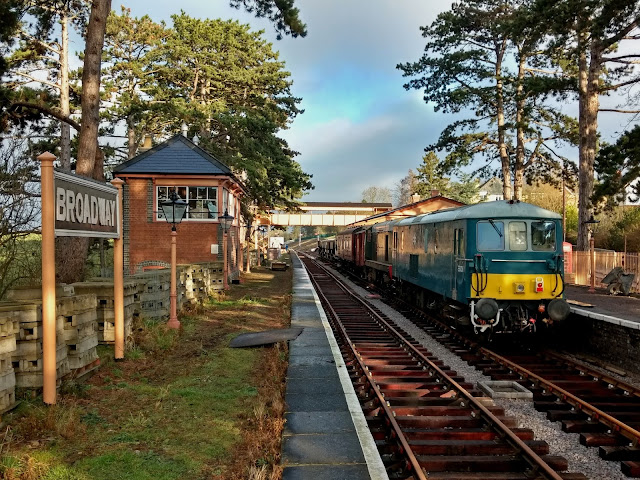 Here is the first ever train into our very own Broadway station, headed by E 6036. What a period scene - replica singal box from Shirley, GWR running in board and replica lamp posts, bullhead rail on wooden sleepers, spearhead fencing, Henley in Arden footbridge, and a station building with a rivetted, faithful reproduction of the original canopy. We want this to look right. 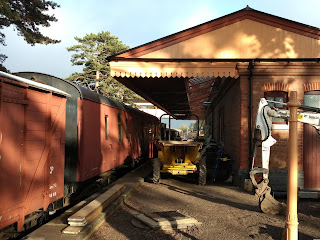 Our mess coach came to a stop right by the building, so all we had to do was get in like a normal passenger. What a strange feeling - wot, no ladder?

Inside there were 25 gang members enjoying Christmas cake and tea. A record number. 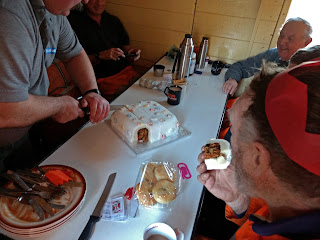 This Christmas cake was something special. Last year we really enjoyed the thick marzipan - the thicker the better. This year Mrs. B excelled herself, and the marzipan was so thick that there were shouts demanding the disc cutter, nay, even a chain saw. Marzipan fest! Steve has quickly secured the first piece, a corner position which is nearly all marzipan, and very little Christmas cake. 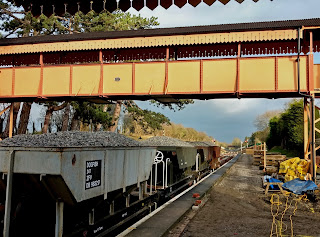 This was all washed down with plenty of tea, while your blogger took a quick look round the station, with a train in it.

Here are the Dogfish loaded with ballast, just underneath the footbridge. What would we do with them? 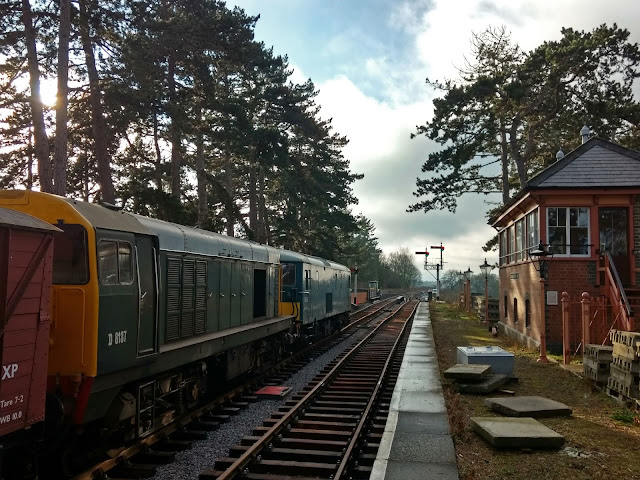 Over on platform 2 you could see the two locomotives facing south, ready to trundle back out again, if only the signal was off. 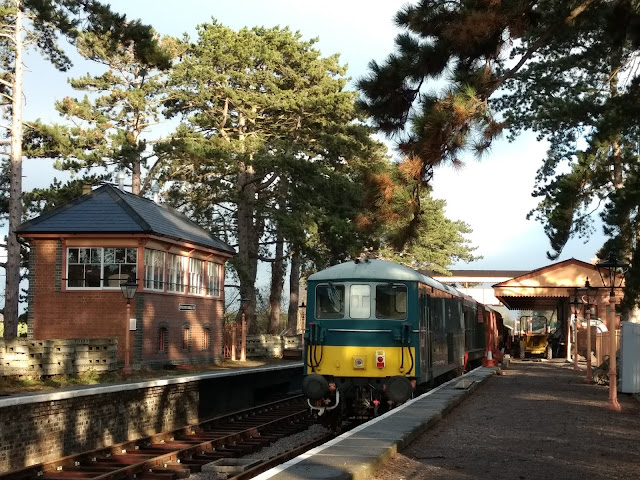 On platform 1 (with everyone still drinking tea inside) you could see the class 73 in front of Broadway signal box. No one about....

But not for long. Time for a group photograph: 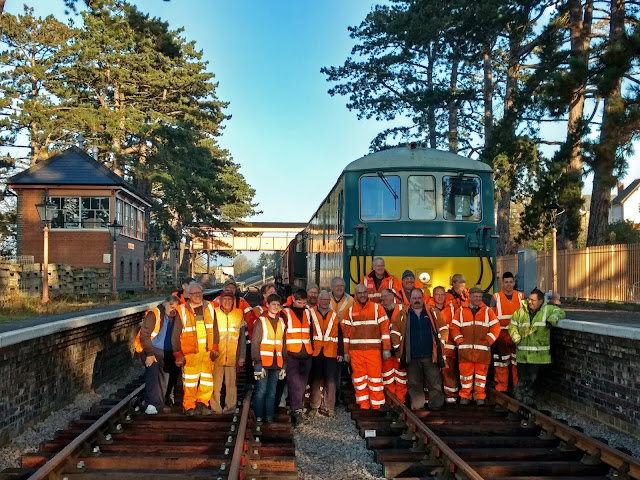 Here we all are, looking rightly proud of ourselves. Not forgetting those who work on Wednesdays, we'll find another way to register their achievement. It takes all of us to build an extension. 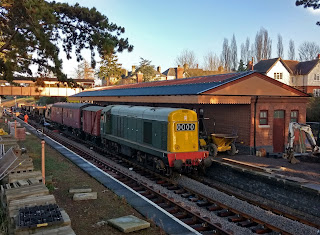 The class 73 then came off the train, leaving D8137 alone in charge of the ballast. Once the class 73 was well out of the way, it pulled forward back over the bridge, and then started to reverse back into the station again, this time with the hopper doors open.

Here is a video of the ballast train discharging its load into the former down line from Honeybourne:
https://youtu.be/bztP4GbdhBM 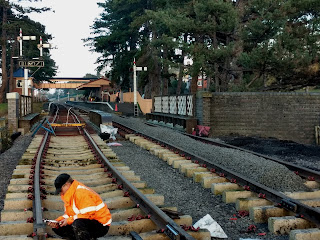 The ballast drop was done very carefully, one hopper at a time. It's very important not to get too much ballast down between the platforms, as once it's in, it's very difficult to remove.

There's now a nice and neat line, not too big, in between the rails. Steve will spread it out with the mini digger next week. Now that's dedication. 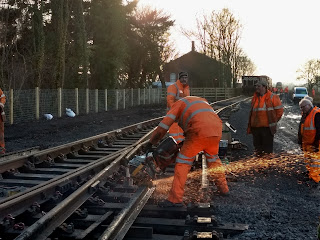 The last job of the day was to lay in the fourth rail.

Chris is cutting it to size with the disk cutter. He ran out of disc with only a few mm to go, for which he had to take the machine round to the other side and start again. Oh well. 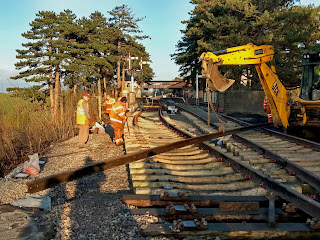 The final rail was then spun round. Being second hand, there is always a good side and a bad one, and we need the good one facing inwards. 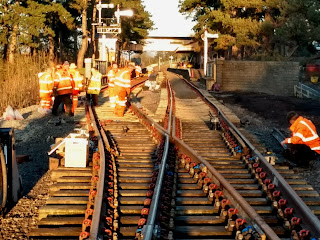 The sun is now starting to sink lower, giving a very orange light. This final overview shows you the turnout completed, and all four final sections of rail in and clipped up. 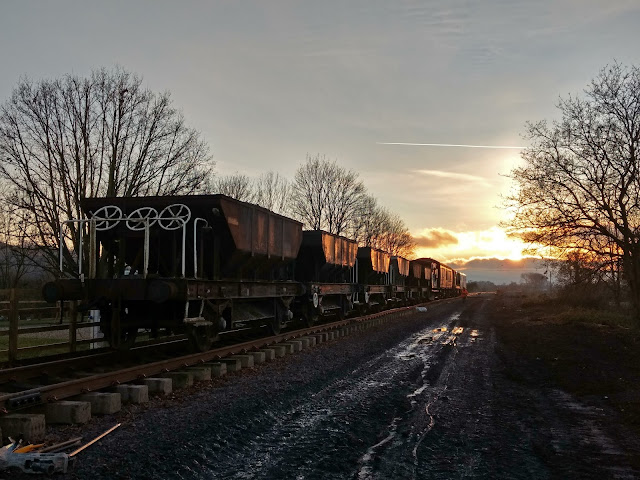 At the end of the day we gathered up our tools in a pile, and then reversed the empty ballast train up to it, for loading into the box van. 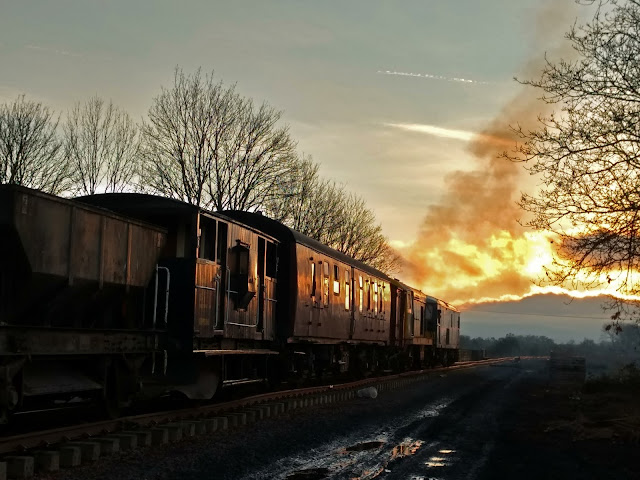 Weary but elated, the Pway gang split up and started their journeys home. A handful took the train home to Toddington. Here are both diesel locos taking power and setting off into the setting sun.

In three months time you too can travel along here. Are you coming?