Minus two and a half degrees this morning, ice everywhere. Toddington yard was heavy with the lazy thick smoke from a recently lit fire in Foremarke Hall.
While we sat in the mess coach, the whole carriage started to shake rhythmically. What? It turned out to be the green class 37 being started up, that is some big motor. Smoke was everywhere, and the green thing popped and spluttered. The low early morning sun made attractive scenes which unfortunately your blogger was unable to capture. For, as he took out his camera to capture the atmosphere to share with you, the camera seized up with a lens error. This is the fate of all the cameras used so far, as the retracting lenses do not like the dust that accompanies the building and PWay activities. Usually they last a year, this one rather less. Bang goes another £160.

As a pacifier, some historical photographs will be included at the end of this post, and for pictures of the day do visit Nigel's excellent flickr site:
https://www.flickr.com/photos/gwr_permanent_way_photo_log

As it wasn't very windy today, the work in the great outdoors at Broadway was actually quite bearable, and we had a full complement of volunteers. No fair weather friends here. The sun was out, and it was interesting that while the ground was frozen, it was on the heights such as Dumbleton hill that some snow had clung, but not down here on the plain. There was a striking line between the two.

Although we had advanced the two (three actually) rail heads to the ends of the future southern turnout, there remained a lot of work left to do on them - straightening sleepers, clipping up, finding and distributing plastics and Pandrols, cutting flame cut rail ends off and drilling to fit fish plates. At the end of the morning the most recently laid track looked a lot better, although the length by the goods shed still needs clipping up, as we ran out of Pandrols along there. Note for the next person to come up from Winchcombe! There are still a couple of dumpy bags of them down there.

After lunch al fresco Steve in the JCB and Alan in the Telehandler started to bring up from the supply train at Childswickham the components of the last remaining turnout from Laverton loop. This is what we all wanted to see! We laid out the first 24 timbers, and then it was time for the serious stuff - the rail!

By the end of the afternoon, and it soon gets dark now, we had the first two switchblades in and bolted up. Standing at the southern end, you could see where it is all heading to now. There is a clear line departing to the left.

Amusing anecdote of the day: Neil had a go at disk cutting a rail end off. He was soon emitting a huge meteor of sparks behind him. With your goggles on, the ear protectors and the noise you are in a bubbleof your own there.

Suddenly Tim shot up and started hitting Neil's legs like mad. Neil killed the engine, took off his goggles and ear protectors.

So, next to a new camera, it's also a new pair of jeans. The joys of laying track.

George Bryant took a number of photographs in the goods shed area, which he is kind enough to share with us. George was the former signalman at the little Moreton in Marsh signal box, until it closed a year or more ago now. Now George is an active volunteer in our S&T department, and no doubt never imagined that, when he took the pictures below, he would one day help to rebuild a signal box at Broadway.

Here are some of his pictures, taken in 1979 during the lifting of the track by BR. 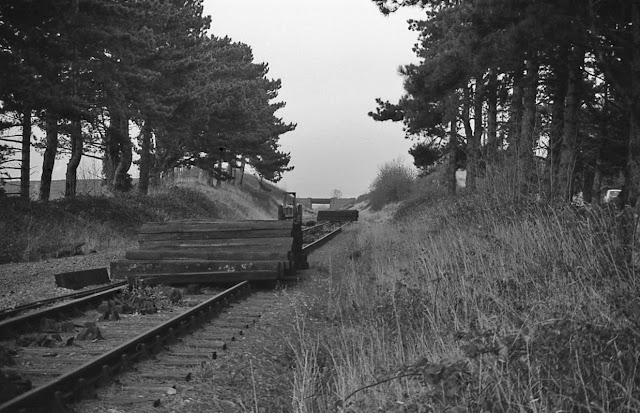 The down line and stacked sleepers in the confines of Broadway station itself. The main buildings used to stand beyond the pine trees on the right. Springfield Lane bridge is in the distance, now our northernmost border. 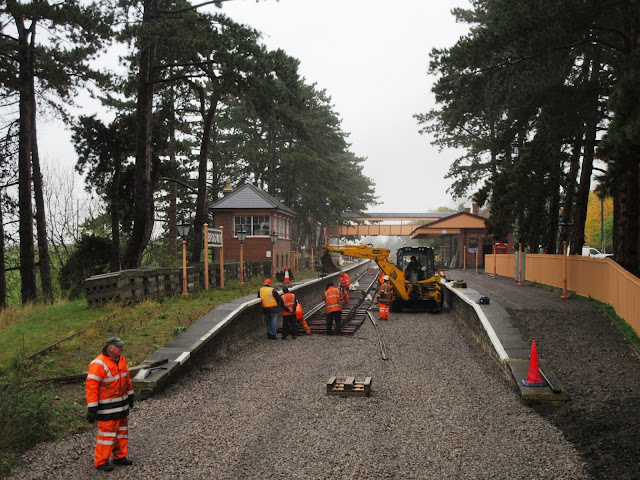 Just to compare: here is a similar shot nearly 40 years later. The pine trees on the right are still there, but George has a new signal box to work in :-) 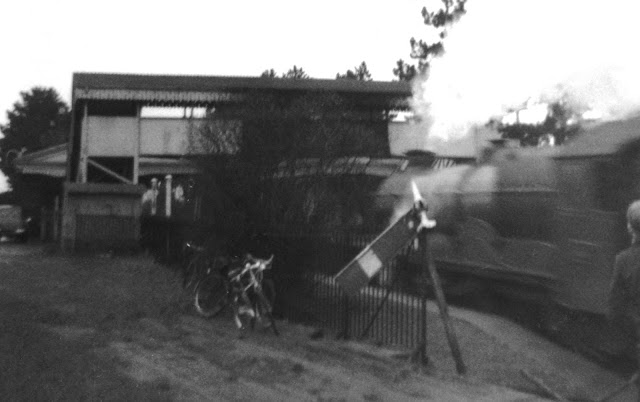 This one's just a fuzzy snapshot, but illustrates well the atmosphere when the gang of teenagers would cycle down to the station to watch (and crudely photograph) the trains that went by. The station is already closed (the running in board has been taken down) but the buildings are still there. This dates the photograph to somewhere between March 1960 and November 1963.

The boys came on their bicycles, which are parked up by the fence. Someone has taken parts of the dismantled signals and stuck them on the end of the spearhead railing fence leading to the horse dock, behind the camera.

Totnes Castle hurtles by with the down Cornishman....

As soon as the Amazon drone delivers a new camera, reports on the extension work will resume with pictures. Next week Monday is a supplementary work day preparing the 1000m stressing job, Tuesday is the stressing itself, and Wednesday is the Mega-Clippathon, with our very own train confirmed. That will be fun, and very atmospheric.