Due to the snow earlier in the week, the whole timetable had to be moved along by 3 days, and only a very small group of volunteers could handle that change of dates (and had forgiving wives).

Wednesday then, a normal working day for the gang, saw us out in force prepping the last 1000m.

Thursday was the new stressing and welding day. 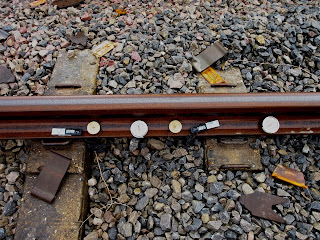 You'll have to bear with us for using a 'stock' photograph (we have stressed 3 times in the last year) but with a bit of luck we should be back to real time photography this Saturday, as the new camera arrived, at last, this very evening. Not a moment too soon! It is currently being charged, then your blogger will need to find a spotty teenager to tell him how to use it. The new camera is in fact a smartphone; let's see how long that lasts. Anything over 6 months is a 'win' over the Canon Ixus with the telescopic lens that is so sensitive to dust (check) knocks (check) and pocket fluff (also check). It's a rough life out on the Pway, and the camera was a sensitive little flower. It died. Again and again.

So, most of the snow has now gone and we can see the track again. The welding crew arrived safely from quite some distance away, and after checking the exact length of the job and the temperature set up the hydraulic pulling apparatus. 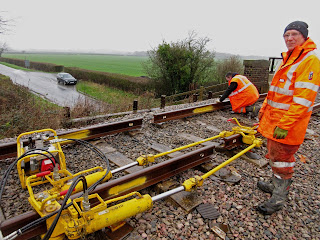 The whole apparatus is portable, you just clamp the arms to the 2 rails, start the surpisingly small generator and off it goes.

For the detail buffs out there (We know you are there) the distance to be pulled was 205mm, and the temperature of the rail was 5 degrees Celsius. 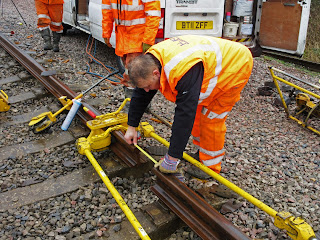 Mick measured the distance left between the two rail ends, allowed for the thickness of the weld, and then an appropriate piece was cut off to fit the gap to be pulled (almost) shut. 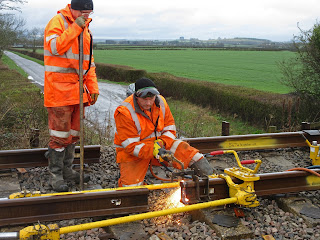 Just a small slice had to be cut off, then everything was ready for the pull. This went very easily, blink and you could miss it. We don't just stand and stare, there are other jobs to do while this goes on, and the next time you have a chance to look, they are getting the welding kit out already.


For the March stressing session there is a video on YouTube here:
https://youtu.be/I8EZ6pEAyLc

It's just 3 minutes of a rail end creeping along at snail's pace, and we hesitated to publish it for fear of getting a lot of 'dislikes' for a boring video. In fact the piece has now had over 5.000 views, and numerous 'Likes', with only one person a bit disappointed with the speed of the pull (or so it seems by his 'dislike') 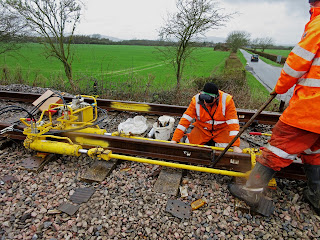 The little genny manages an amazing pulling strength - 350 tons of pull it does! The pressure in the hydraulic hoses is 7000 PSI, so it's no wonder that an apparently immovable object can be stretched by 20cm. In the picture they are levelling the two ends so that they are perfectly parallel, before setting up the weld. 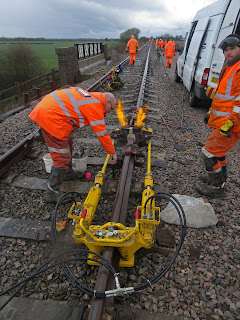 Still pulling the whole show tight, the ends are heated with gas burners, ready to receive the molten metal from the combustion process.

In the meantime, all hands on deck for the rest of the gang, including anyone spare from the welders, as the 4 rail ends now have to be clipped up as fast as possible to secure the stressed rail. Yesterday the welders went north for 3 lengths, while our little PWay gang of 5 (!) went south, fully clipping up this minimum length as fast as we could. 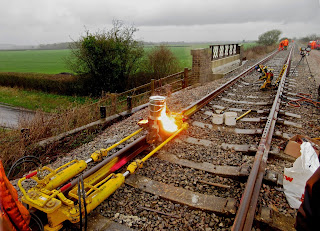 Then the pot with the chemical reaction went on, was lit, and for a few moments there are sparks, bright lights, smoke and an impressive orange glow as the molten metal drops into the mould.

The original idea then was to assemble a gang of 40 volunteers, mess coach and loco on site, to do a super-mega-clippathon the next day. There were going to be so many volunteers that lunch would have to be in two sittings.

What actually happened was that the day after the stressing and initial securing of the stressed rail was today. Only six (!) volunteers managed to come out and help. A quick cup of tea in the mess coach, huddled round a portable heater, a mince pie stuffed in your pocket for later, and we set off in the Landie and a couple of 4x4s (the Buckland entrance is very boggy after, it seems, someone dug a trench across it and only loosely backfilled it). On site we split into 3 teams of 2 and clipped up what we could. 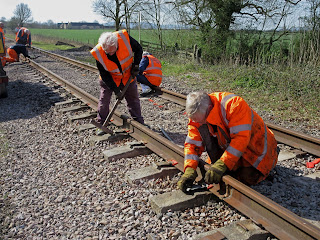 This picture, taken in March, shows what we did all day. On your hands and knees, trying to get the plastics into gaps that were too small, and then hammer in the SHC clips or pull in the pandrols, depending on the sleeper type. Because we were not 40 but only 6, the best we could achieve was a minimal securing of the rail, being one sleeper in every 4. The pressure was on, as the extension train at Childswickham is due to be recovered on Tuesday, and the train must get through!

At the end of the day, working under a bright sky with an icy wind whistling from left to right across the tall embankment at Peasebrook, we did manage to do it. Such a relief. The track should now be useable by a works train, subject perhaps to a final inspection. Every 4th sleeper is fully secured, all the rollers are out, all the pads are in, all the materials distributed.

What now remains to be done is to clip up the bunches of 3 sleepers we didn't do today. Fortunately this is not urgent, and can be done bit by bit.

We retired home, creaky, to be welcomed by a hot cup of tea and a crumpet with strawberry jam. Who could ask for more? Not to mention the tremendous job satisfaction of having achieved the minimum clip up, with a minimum gang. We did it!