The running season has restarted, and so has sleeper laying on the Broadway extension! It's good to be working out along the line again.

A good team of 13 set out today, with four to start brushing the CWR section to give it a final clean, ready for the stressing later this month.  More needs to be done here, before the rollers go under.

The other 9 worked on the railhead itself. This is the view off the end bogie flat of the PWay train parked on the railhead. The next point of note is Peasebrook Farm bridge (Bridge 4), just visible by its two sets of handrails. The newly laid ballast bed now stretches off into the distance right up to Childswickham Road bridge, just before the red goods shed visible at the back. 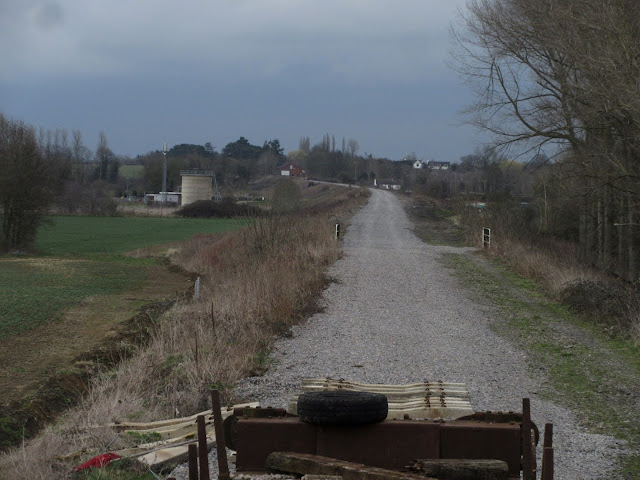 The extension train has been reloaded and parked close to the railhead. We've got 320 freshly loaded concrete sleepers up there, plus enough rail to get us over the next bridge.

The tamper's been right up to the end of the supply train, as has the ballast regulator. 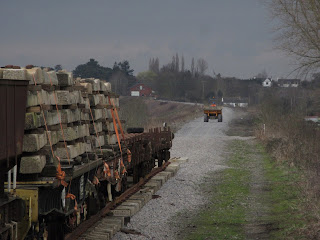 This was the view on Friday, when we ran the two 6T dumpers down here to bring another two loads of ballast to beef up some low spots identified, and to take away some rubbish from the lineside. 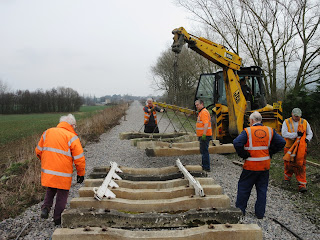 And then we were off, with a small but perfectly formed sleeper laying team. The weather was kind, and as you can see, we were soon taking off our winter coats as we warmed up with the physical excercise. 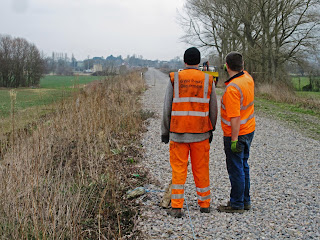 Ade set out the all important blue line to follow, and here Paul is explaining where Broadway lies - it's thataway, about another kilometer further. Ade then set out some intermediary posts, helped by signs given by the sleeper laying team: left a bit, right a bit, that's it. We need to hit that bridge in the right spot. 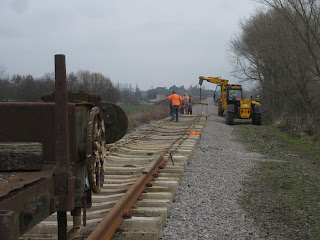 After rearranging 8 sleepers left by the lineside by the welding team, we ploughed on with new sleepers and were soon moving ahead of the supply wagons towards the bridge, our target for the day. 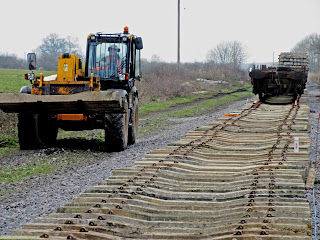 Alan brought up a steady stream of sleepers to lay off the two bogie flats, one of which was cleared but for a dozen or so in a corner by the end of our session. This morning's effort already looks quite good, in the foreground. 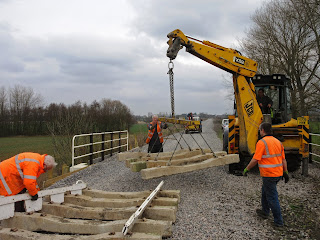 Then, at a late lunch time, Steve lifted in the final 4 sleepers at Peasebrook Farm underbridge. That made 150 sleepers laid in this session. We could have done more, but had to return to Winchcombe to load supplies and tools into a 10T goods van, which we hope will accompany our mess coach, finally, into a PWay train at the railhead. We are in fact spending a long time getting to the work site after first loading tools etc at Winchcombe, and having to return for lunch and then coming out again. Messing facilities on site, here a mile from the nearest road, will benefit us all. When it rains, there is no shelter at all out here. It can be grim.

Feeling rather triumphant today, we lined up on the final sleeper for a group photograph:


Part of the glory also goes to Alan on the Telehandler (already returning to Winchcombe) and to Nigel and the brushing gang, who were working further back on the section that is about to be stressed.

It's worth repeating at this point that your contributions are paying for the contractor lifting in the sleepers, for the sleepers themselves, the layer of ballast on which we are placing them, and finally, the underbridge here, which was refurbished as part of the 'Bridges to Broadway' programme. You made it possible - give us the means, and we will build it! 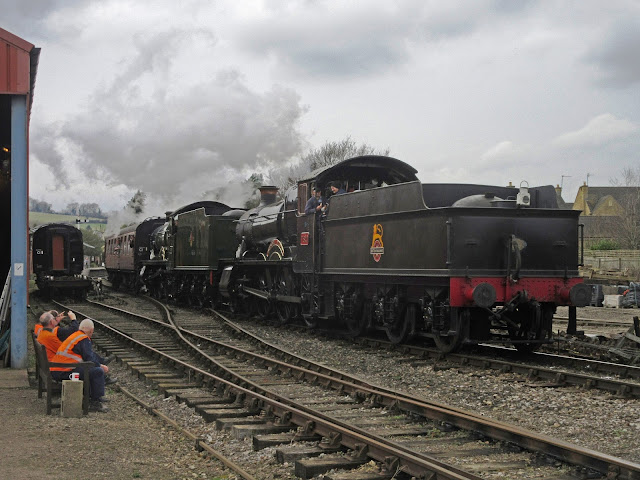 Back at Winchcombe, this is what we all hope to see on the extension in a year's time - a double header with Dinmore Manor and Foremarke Hall, on a well filled train. The DMU  also looked busy, and it was cheering to see that the season seemed to be off to a good start.