As we come to  a stop with ballasting close to Childswickham Road bridge, thoughts turn to Broadway station itself. 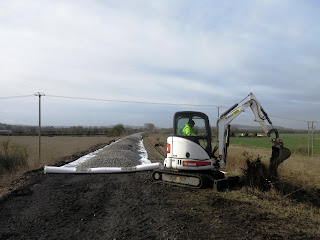 Yesterday we put in another 30 yards or so of ballast, to finish level with the Laverton rails and about 20 yards short of the bridge. We didn't do this last bit, as we had another job to do above the culvert for Broadway Brook.

Here is Steve, taking out a small tree stump. The freshly ballasted trackbed sweeps away into the distance. We've already done most of the levelling, with just a bit more to go this side of Pry Lane bridge. There is certainlyalready  several 100 yards ready for further track laying. The pinch point at the moment is getting the sleeper train loaded at Skew Bridge. 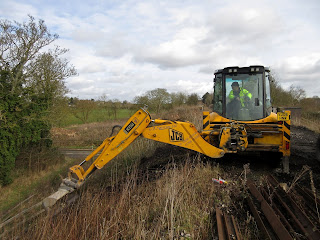 To get a bit more reach, Steve brought down the JCB with its extendable boom, to remove some excessive overburden above the brook culvert. 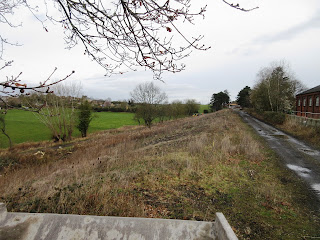 Returning to Broadway, this is a picture of the embankment for which strengthening is being arranged.

This is the view looking north. 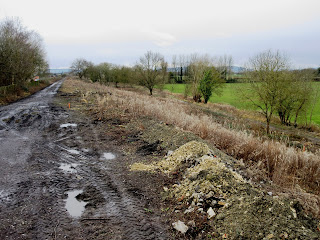 The same area, from the other end, looking south.

Once there were 4 tracks here:
- The goods shed loading road (in the trees on the left, since sold to the Caravan Club)
- The up and down main lines
- A long refuge siding, on the right. 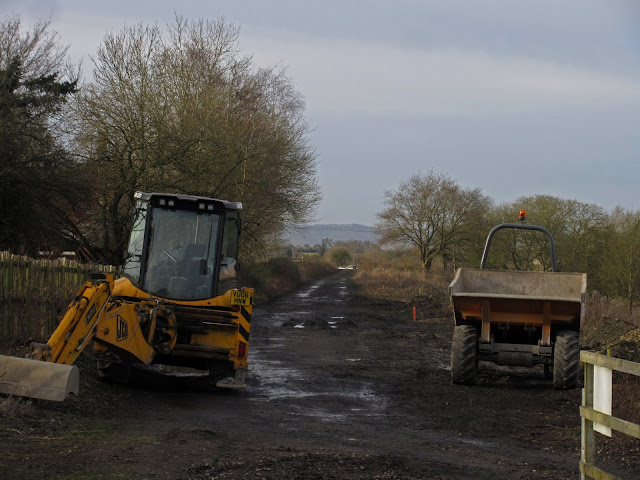 Later in the day, we were parked up by Broadway bridge. If you look right through, you can see the fruits of our labour: the white Terram has reached Childswickham Road bridge. We can't go any further here until the works on the embankment have been completed. 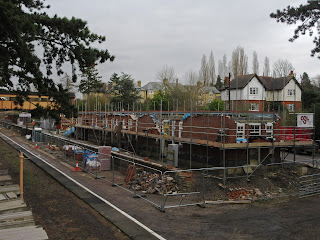 A couple of updated station building pictures are also of interest.

Brick laying is currently concentrated on the arches over the doors and windows.

The Heras fencing has been taken off the platform, and is now erected on the down line, leaving the up line for PWay materials to be taken to the northern part of the site. 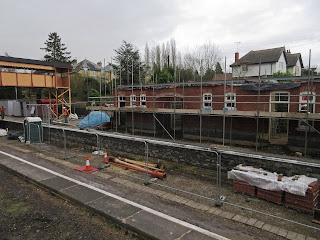 A detail of the toilet area, a new part of the building that wasn't there before.

The new gent's is on the far left; the larger arch spans a vestibule that leads to the disabled and ladies' toilets.

The new fence line along the middle of the trackbed is in the foreground. 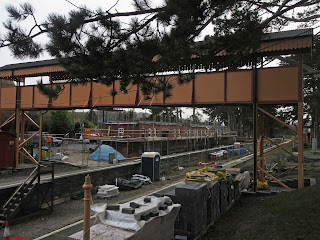 A peep through the footbridge centre span, looking south. 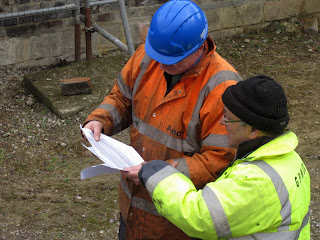 There have now been several visits from members of the PWay department to the northern part of the site, where the first piece of track laying will take place.
It's quite complicated working out the levels here. Broadway station is actually at the apex of a hump, which falls away in both directions. If you extend the platforms (as we did, as we have longer trains) and keep them level, then the height difference between the platform surface and the bottom of the trackbed gradually increases as you go north. Soon after comes the turnout for the loop, and that must not have a change of gradient on it.
The trackbed between the platforms, contaminated after 5 years of building activity, also needs to be scraped down to fresh ballast, and then filled back up again with new. How much new, and where, is being worked out at the moment. In the picture Steve and Andy examine the survey to see what impact it has on the ballasting. 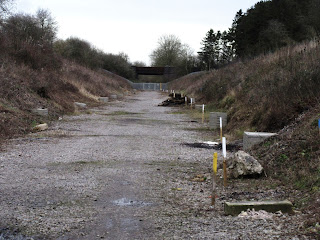 This is the area in which the PWay gangs will start laying track. They will start at the far end by the gates and work forward towards towards the station, behind the camera. The first job will be to import fresh ballast and lay it to the required level, so that the rail height is correct for the platforms. The correct levels still have to be indicated on the posts you can see on the right. The catch pits have already been raised, a good bit of anticipation from Mr. P !
The rectangular piece of stone in the foreground is a window sill from the original station, unfortunately too damaged for further use. If you want a piece of the original station, we might consider selling it for a donation... 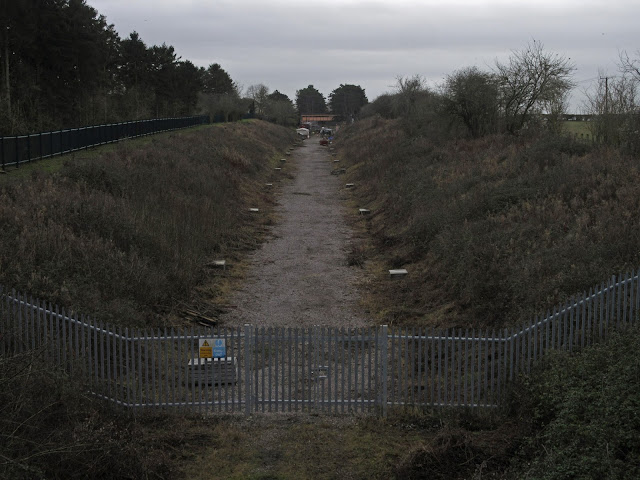 Finally, a look over the site where the first track will be laid. The view is from Springfield Lane bridge, with the GWSR property boundary and gate in the foreground.