A strange weather day today - freezing yesterday, plus 13 degrees today, with high winds. But it proved to be an excellent day for another stretch of fishplate greasing. We must complete the greasing of all the fishplates along the line, as it is written into our method statement that we will do this on a regular basis every n years.

All our kit is on the train, and as the current location at Far Stanley is rather remote, it struck us as a good idea to take the PWay train out, and unload the machinery on site. Sadly, in practice this turned out to be impossible, and once again we had the manhandling of the compressor, TB2s, their trolleys a Permaquip and all the ancillary stuff that goes with it. 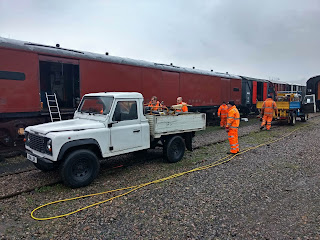 Now that we have two Landies we can at least take all the kit in one go.

Another slight easement was the removal of a couple of coaches off the rake that is often parked out side our door as it were, so that we could take the Landies right up to the storage vans. 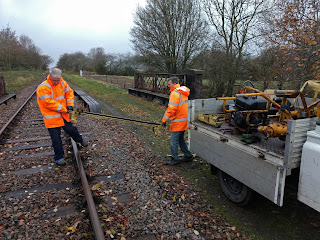 Here we are at the other end, with all the heavy stuff on board the white Landie.

Paul and Lee are setting up the trolleys, which can still be lifted by 2 people.

The TB2s on the Landie are too heavy and awkward really. Luckily the blue Landie has a small crane, which is perfect for this job. 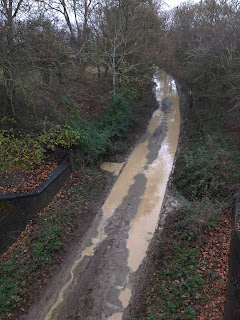 We started at the bridge which leads over this lane. It was used too, even as we watched. It's in a very leafy and muddy cutting and something seems to be blocked. 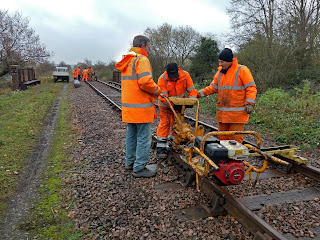 The three teams out at Far Stanley were set up and ready to go by 11 am. Even with a reasonably early start, it takes this long for the actual kick off on site. By 12.15 again already though it is time to return to the mess coach for lunch. Lunch in the open air on a wet day like today is not really on, and we have no shelter at all on site. 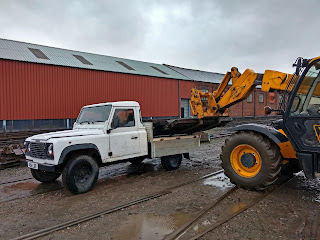 Back at the ranch the white Landie was being loaded with 'garden quality' sleepers. These mainly came out of the Winchcombe relay, and the construction of the 2 new turnouts at Toddington.

We grade them into re-usable on the railway, and garden quality for sale, so there's a bit of pocket money for the company in it. 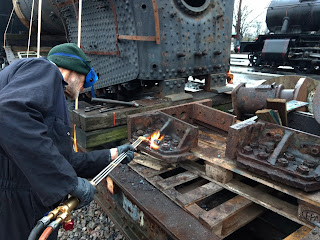 The Landie then took a whole load of GWR throughbolt chairs up to Toddington, where the 2807 group turn them into boot scrapers. Quite a few were from the earliest GWR period and were stamped '92' and the GWR was engraved, not in raised letters as on other chairs. The '92' refers to the time the GWR finally changed from broad to standard gauge, we were told.

While dropping off said chairs, we were delighted to find work being done on our Pocket Rocket. Here, as set of horn guides is being stripped down. In the background is its boiler, the frames being off site for other work by a contractor.

It won't be long before we will be invited to subscribe shares for this interesting project; a completely original Barry engine, and one which will be extremely useful on our line. Check the Pocket Rocket out on YouTube, it doesn't half go! 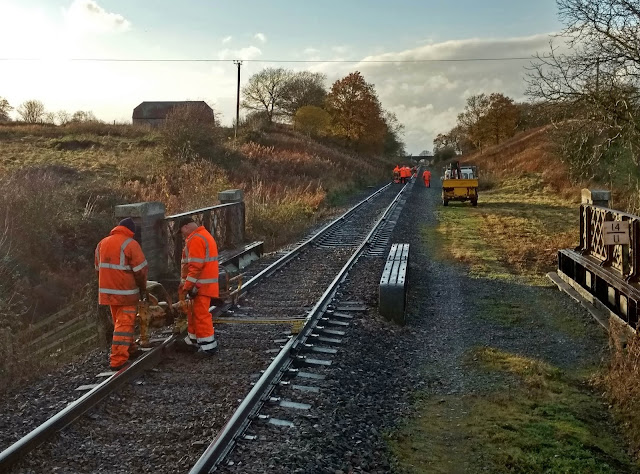 As the light began to fade mid afternoon the white Landie returned to far Stanley to recover the TB2s. Great was our surprise when the fishplate greasing gang was nowhere to be seen. Like greased lightening - or at least in a greased manner - they had disappeared from sight. They had completed the very long stretch of straight track at Gretton, gone round the next bend, and here we find them on the Prescott road bridge and part way into the cutting. Three Arches bridge can be seen in the distance, round the next curve is Gotherington. Wow. 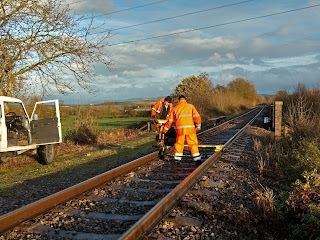 Check out this fine weather. Appearances can deceive... only minutes earlier it rained so hard they were going to call the white Landie back early, and only didn't do so as the driver's telephone number could not be found. Again, no shelter on site. 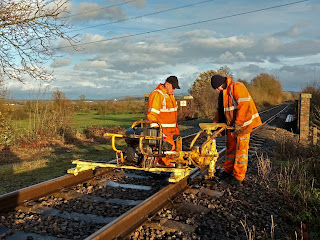 This is the 'doing up' team, always several lengths behind. The undoing and greasing teams were well into the cutting. 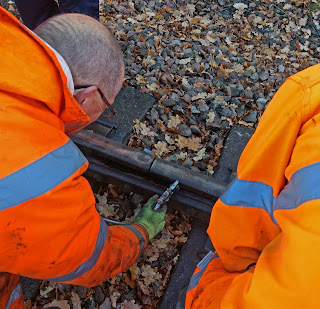 Greasing is quick, thanks to the compressor and a pistol grip.

The man on the right has a crowbar to open out the two fishplates, so that the grease can be squirted in.

It occurred to us that the greasing team returned looking rather neat. Where was the grease, had they done any work at all? But of course they had, they must have done close to a mile today. 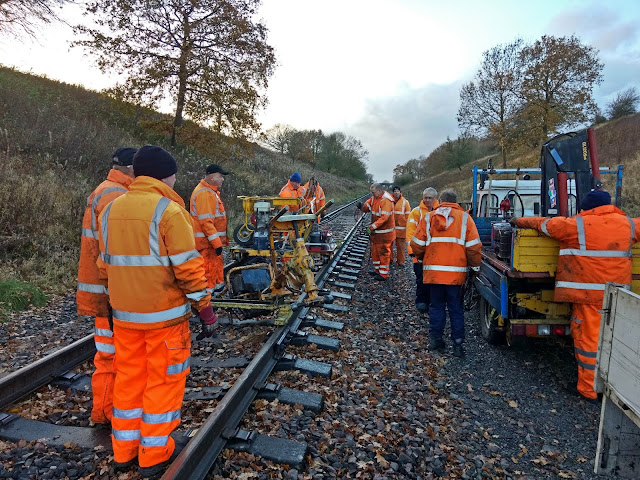 This is today's furthest point of advancement, right in the cutting and in sight of the unusual brick bridge with its three arches. Almost all of our bridges are made of steel, and hence suffer from advanced age and cost us a great deal of money.

It was good to see such a big team out. They were necessary too; everyone played a role and was indispensable. We'll have another push next week, which should take us at least into Gotherington station, and maybe even a cup of tea there? Tea for 12 please ! 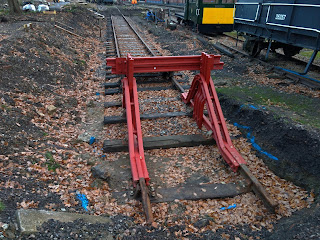 A quick look at the siding we recently moved shows that Stevie has sprayed the outline of the platform wall in blue. You can see that it has been decided to give it a return around the stop block, and excellent idea. Actual work on excavating the foundations will start at some time next week.

Fabrication of the steelwork is complete, and thoughts are turning to galvanising. All the steelwork needs to be taken to Hereford to do this, so we are going to place it on pallets. 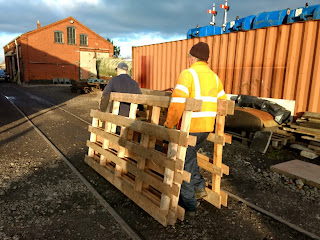 Luckily we have a large pile of pallets at the back of the yard, and we sorted out a few useful shapes, such as these long ones. Neal and John are walking them across the yard. 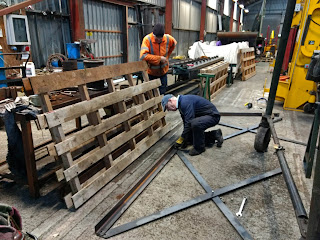 Inside the loco shed the pallets were cut to shape, and some of the cross bracing was taken apart for transport. We also did some degreasing. The pick up is on Monday and by Thursday next week it should all be back. So quick. Then there's the etching treatment and a first coat of primer.

Work on the car park has resumed: 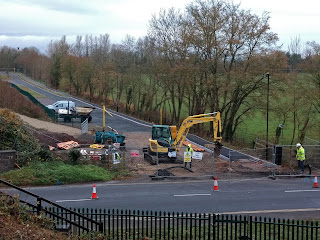 The same contractor has returned and is now going to finish off the bell mouths. It's two weeks for each end, we learned. There won't be an island in the road, which is a shame, as it would have slowed the traffic which mostly exceeds the 30mph speed limit here, coming as it does down Pennylands bank. 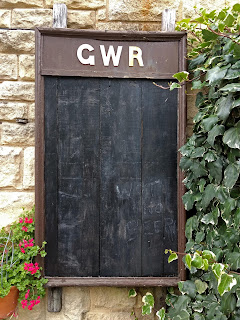 Off site further authentic items are being prepared for fitting to the station before the next season.

If you look at the 1904 platform side picture you will see that the wall of the building has a whole series of posters on it. These were carried on boards, like this one at Gotherington. They are made of T&G with a special grooved moulding around it. This moulding holds it all together.

The letters above are cast and 4 inches high.

A supporter has (with our agreement) given us 4 authentic reproduction GWR posters on aluminium sheet supports. These are completely weatherproof, and thus suitable for use outside. They look exactly right, but won't fade or get ripped to shreds by the wind.


We have a collection of original cast GWR letters (more are always welcome) and we have sent a set of GWR ones to a small foundry to be copied 6 times, for 6 poster boards. 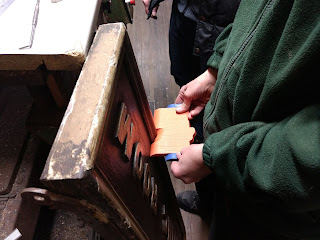 T&G is easily obtainable, but how about the special grooved moulding?

We went to a specialist company in Wallsall, where our moulding shape was measured with this interesting gauge (A pin gauge, isn't it?)

You press it on the shape, and it makes a perfect reproduction of it. And it's not used very often, we were told, so the GWR moulding really is an old and very special shape.

The same moulding will also be used on the production of more V boards at Broadway, such as WAY IN, WAY OUT, and 'WAY OUT over the footbridge'.

It takes quite a bit of research and a lot of time to source all these special letters and materials, but it is happening, and we will have them ready for the next season.