Two volunteers set out to have a go at removing the graffiti painted on to our bridge parapets last summer. Our Santa Special month is nearly upon us, and we don't really want the passengers to see the offensive language sprayed along our bridges.

Graffiti removal is a new experience for us, so today's mission was a bit of a test case to see which method worked at all, or worked best. 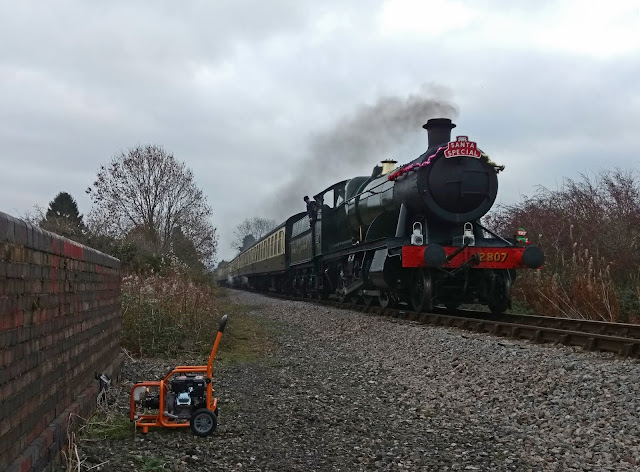 As we started at Gretton, a charity Santa Special e.c.s. passed us on its way to CRC. We may be in the off season, but that doesn't mean no trains. 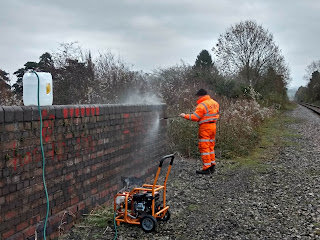 We had a motorised power washer with us.

Although it took limestone off a concrete floor in a test off site, we were surprised to learn that it did not take paint off bricks. It also quickly drained our supply of water, albeit that we had 8 of these jerrycans with us. We came prepared. 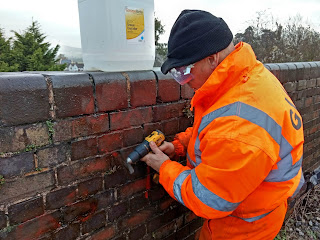 We had a spray can of graffiti removal solution - did you see that at work on the Paddington documentary? - and a small jerrycan of it.

The spray can treated one parapet, but again the power washer was unable to remove the result.

We then tried the next option, which was removal by an electric drill fitted with a wire brush. That did the trick! 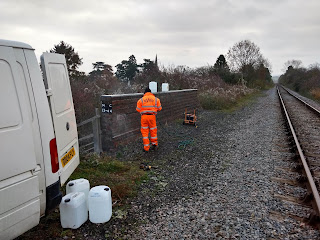 A follow up with the power washer did not improve the look a great deal, so we decided to stop after the rotary brushing treatment, which largely flung off the undesirable bits. 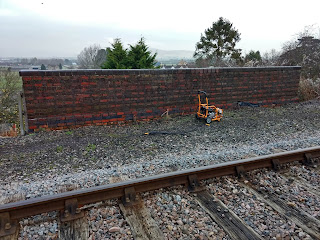 Here's one we did earlier. There are still traces of red paint here and there, but whatever there was is now certainly illegible, and looks pretty cleaned up actually, we felt. 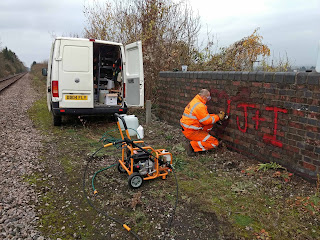 David here is removing the letters one by one, with some success.

We think they were applied during the summer holidays. More graffiti in the same style appeared in May next to the new estate at Bishops Cleeve, which is where we guess the culprit is located. 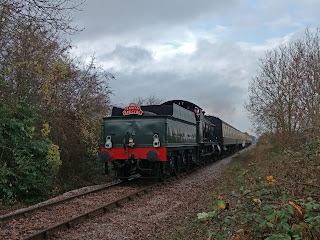 After a while 2807 returned, this time with a train load of happy children (we hope). The destination was Santa's grotto in Winchcombe. Actually, make that 'North Pole'. 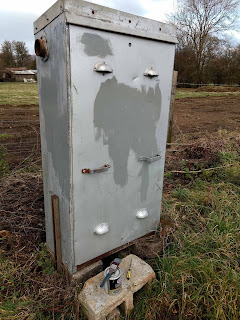 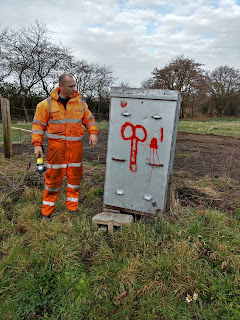 Next, the lineside cabinet, equipped by our teenage varmint with what looked like a pair of scissors. A test with a rotary sander was a failure; it was too rough and shined up the metal underneath. Your blogger later returned with a tin of grey primer, which did the trick.

One neater lineside cabinet then. On to the next item. 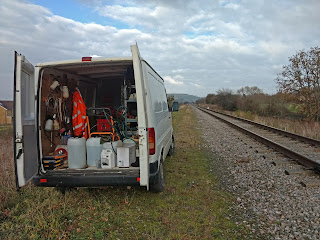 David came with an impressively equipped van, which had everything in it you might wish to need. It was fitted with extra knobbly tyres, and coped admirably with our somewhat overgrown trackside roadway. 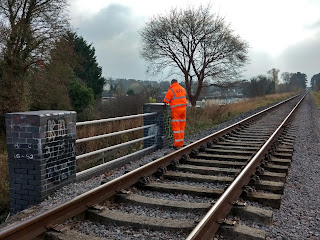 The nearest point to the new housing estate at Bishops Cleeve is this underbridge. The abutments are completely covered in graffiti, so much that removal in the way we did it today was not really on. We concentrated on the top side, which is visible to our passengers.

The abutments beneath are probably best painted over. They have also been protected now by a strong anti vandal fence, which also makes access to the trackside more difficult from there. 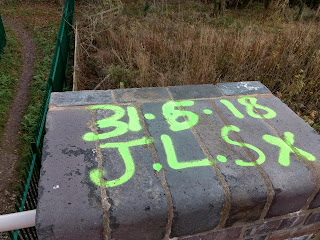 Happily our teenage varmint signed and dated his scrawls - anyone know who he is?

This too has now been removed by us, so our beautiful line is now clean again, until perhaps the next summer holidays. 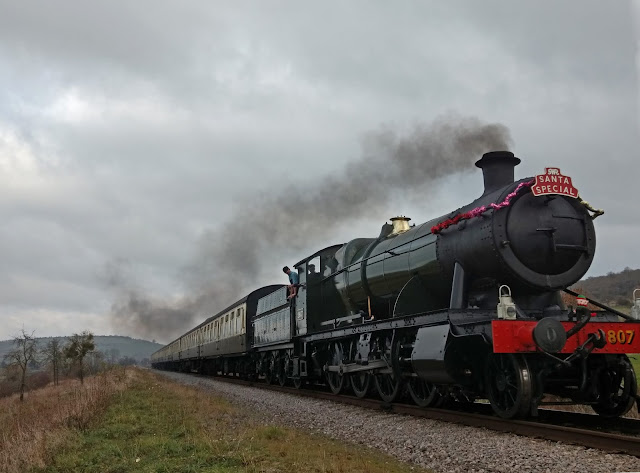 And now back to what we are here for - steam trains ! 2807 is bringing the happy children back to their starting point at CRC.

2807 has shut off steam for the speed restriction through Bishops Cleeve station area.