No, not an all day breakfast at a roadside burger van, but our job today. Stand well clear! Volunteers anyone? Hands up for the grease feast. 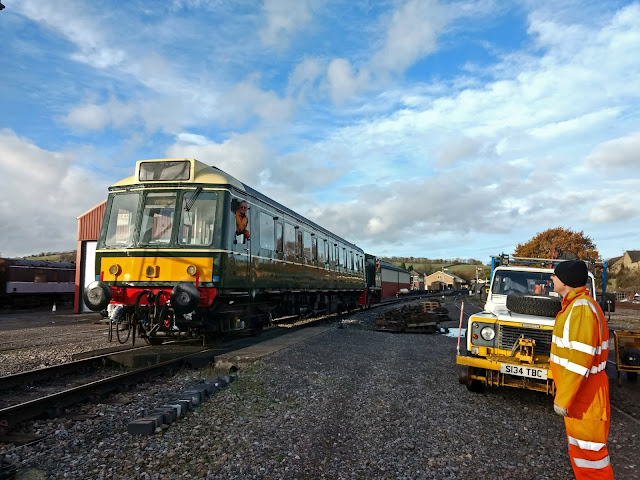 Some shunting greeted us as we loaded up at Winchcombe. This lovingly restored DMU seems to be on its way to Toddington at last to join its sisters, but in fact it was being propelled by the 03, making room in the workshop for something else while the interior is completed outdoors. 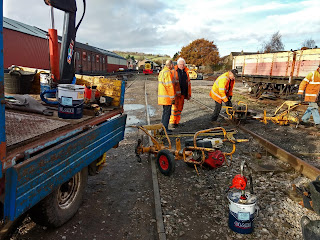 We needed 12 volunteers today, not least of all to load the two Landies to the gunwales with all sorts of heavy equipment.

And we got 12 volunteers. Bless them. 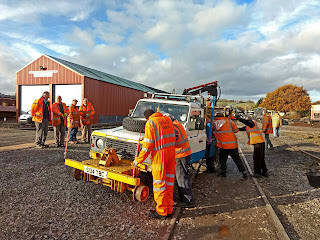 Mind you, we meant 12 volunteers for lifting, not committee forming to give points from the side for style. One ducked out as he had 'put on clean trousers this morning'. Must have read the call to arms email, that one. 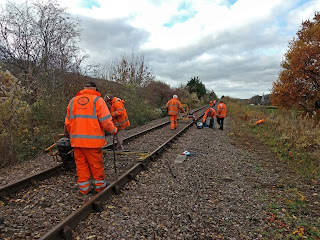 Our starting point was the home signal at the start of the long Gretton straight. We split into 3 teams, consisting of 2 TB2 nut runners and one Permaquip trolley with a compressor and the grease (we stood well clear of that one). 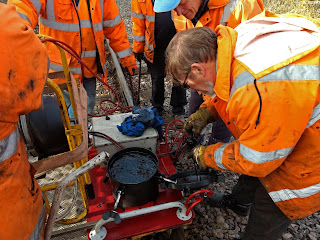 The grease was to be distributed by compressed air (isn't that asking for grease everywhere?) and the system involved a sort of pressure cooker type pot with a lid. Nothing can go wrong with that! Well no, unless of course you open the lid because the grease has stopped coming through... 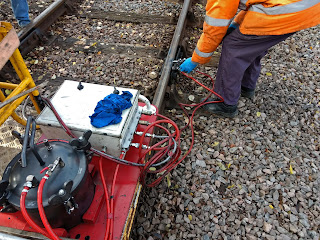 This is the distribution end, with pipework leading to two grease guns.

Love the volunteer who thinks some blue gloves will stop any grease getting on to him. Ha! The grease is cleverer than that. 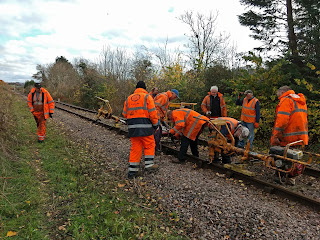 Here are the three teams together. Initially we were quite close to each other, but as the day progressed the 'doing up' team fell further and further behind. 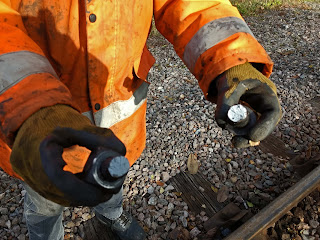 The first thing that slowed us down was a bang, as this bolt, perhaps an inch thick, suddenly split and the two halves shot off in opposite directions. That was a new one, never seen that happen before. Luckily we had brought  a few spares, you never know. 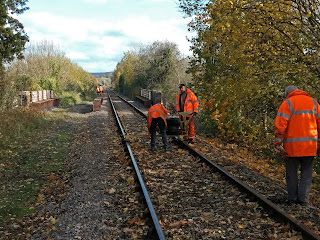 We made it to this spot by lunch time, the skew bridge over the road at Gretton. As you can see, it is very autumnal here, and some trees are quite close to the track. 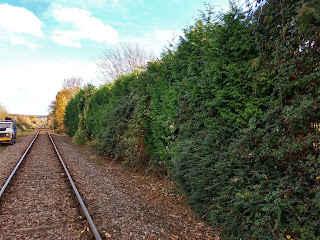 In fact some are too close. Here we have a hedge of conifers that someone has planted just 8ft from the rails. That can't be right? 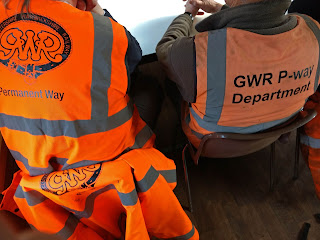 We ate our lunch back in the mess room, car sharing from Working Lane. For those in the know about trackbed access, we started to build a road from the Royal Oak down the hill to Working lane (quite a distance) but ran out of material, using the spent ballast from the Winchcombe relay earlier.

The contractors from the slip have now put their surplus material on this new hardened road, but instead of lengthening what we started, they have set off from the Working Lane end. Now there is an unmade up gap in the middle, still to do.

A casual gaze around the mess coach easily reveals those who go out and mess with the grease, and those who stay behind.... 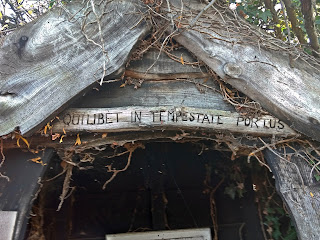 On the way back, now to Stanley Pontlarge, we passed this charming bus shelter near the access point that we use.

As you are probably wondering what the Latin inscription says, we have translated it for you:


A harbour in a storm for anyone

It does have a certain rural charm, it's true. 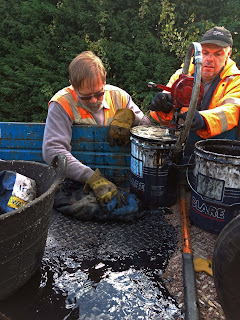 Disaster struck when we returned !

The evil grease monkey had overturned one of the tubs. As it had a lid we thought we were safe, but it turns out the lid was loose.

After some emergency swabbing on site, we cleaned up the Landie back at Winchcombe. Of course some of the grease had jumped on to various tools, and like some sort of virus it quickly moved on to gloves before infecting overtrousers and similar such kit. We hope it spared Dave's Freelander, with its immaculate interior. This morning. 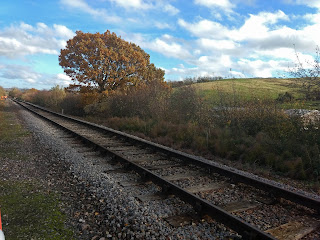 As we moved through Gretton we enjoyed lovely views of the Cotswolds edge. We're on quite a high embankment here, so high that it has a step half way up. 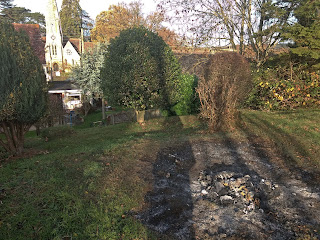 This is a view down our embankment, or is it now someone's garden? 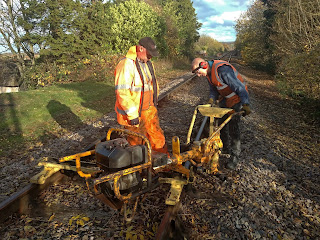 Team 'doer upper' was moving along nicely, with its 3 members in perfect tune operating the machine, pushing it from side to side, and putting the boot against the bolts to hold them in. When we got tired, we swapped around. You can barely see the home signal in the far distance, where we started earlier in the day. 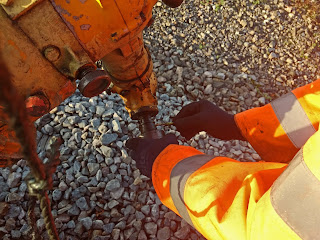 Then the socket fell off, a major blow. It had been secured by a split pin, but out here on the top of this long embankment new split pins were scarce. What to do?

Necessity is the mother of invention: Bert went over to a bush and broke off a suitably sized twig. This was pushed into the hole, and it held the socket on for a fishplate or two, until the twig snapped. We then - got another twig! This went on for quite a while, but it got us home. 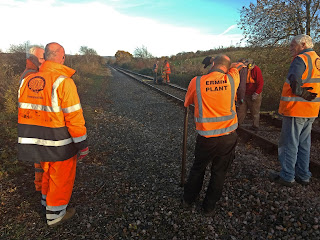 As the light began to fail, we reached the 'limit of operation' for the day as it were. The starting point by the home signal is almost out of sight in the far distance. We think it is about 3/4 of a mile or so, an excellent result. Martin is wiping the sweat from his brow, it was a hard day's work, but satisfying for achieving so much. 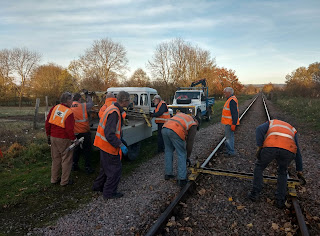 The point we reached was right next to our Far Stanley access point to the trackbed, easy to remember for next time. We heaved the heavy TB2s back on to the white Landie, and unmissable purchase as you can see. The other Landie had the compressor and tools on board.

We managed to get another 4 volunteers together, and set out to do the cleats on the other 4 stringers for the footbridge steps. 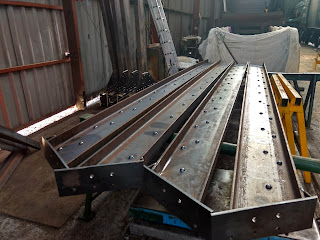 Here are the ones we did earlier: 96 rivets in these, and there better not be any rivet counters out there. Now for the other 4. Confusingly they have only 11 cleats each, so if we achieve that, we will have done 88 rivets. 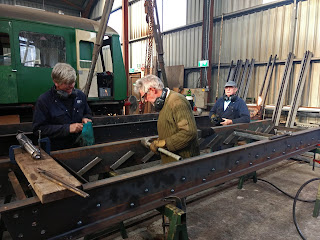 Neal, John, Chris and yours truly got a nice rhythm together and, despite a late start, got all 88 rivets in by mid afternoon. 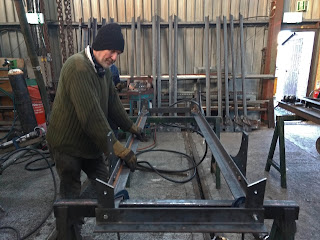 As there was still some daylight left, we carried on by parking the 4 stringers to one side to clear our little working area for the next job: riveting the uprights that carry the roof.

Again we bolted them back to back to make a frame against which we could push the jammer. One such frame, consisting of 2 uprights, has 12 rivets in it, and we did two frames. That makes 112 rivets for the day, a result with which we were best pleased.

There is still no sign of the squeezer we had intended to borrow, so we are just carrying on doing the rivets by hand, which is proving just as quick.

Still to do are the uprights in the background, and 3 more off picture on the ground. We have penciled in Friday for this.

After that the units we have made up will be cleaned, and sent to be galvanised. That should only take a week, so completion of the fabrication looks possible by the year end.