16 of us this morning, encouraged by a moderate weather forecast, perhaps some light drizzle in the morning. A second day of fishplate greasing was on the books, that can't be too hard with this forecast.

How wrong we were... 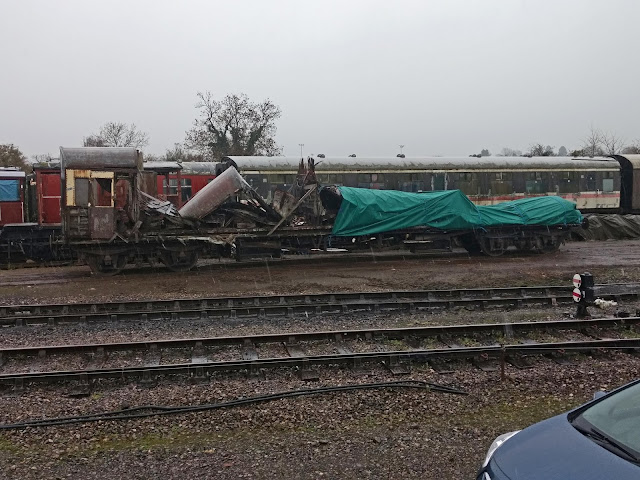 Just as we were getting the tools and TB2s out, it absolutely bucketed down, and soon the drops became slower and heavier - snow ! You can just about make it out on the picture. The Cotswolds Edge became all white. 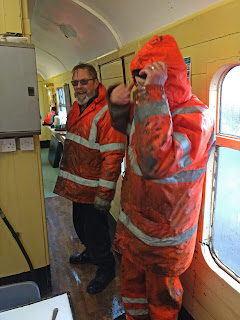 Everyone scrambled back into the mess coach, sodden. Only Dave continued manfully, until he realised he was on his own. No team support there...

We slammed the door shut, and stood in ever increasing puddles as the water drained off our supposedly waterproof clothing. It isn't of course, it doesn't claim to on the website, but it looks as if it ought to. What's the point of this heavy duty PWay gear if it isn't waterproof?

Well, the point is that waterproof gear is three times as much. 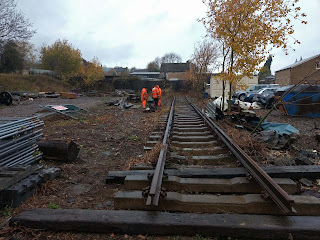 Plan B was advanced - stay nearer to home, nearer to the dry mess coach, and work in the yard on the other side and dismantle the siding without a turnout - the Pointless Siding. It certainly no longer has a point, as its two occupants have finally left. Well, one has, the other is now outside the barn (see above) but has at least acquired some sheeting to improve its travel options. Both the second ruined coach and the two stop blocks (how much does your council charge if you park across 3 spaces?) are due to leave very shortly. 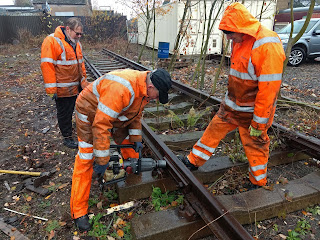 Mid morning the rain lessened, and in only modest drizzle we went out, knocked out all the Pandrol clips and here we're taking off the two sets of fishplates that held together the two sections of track. 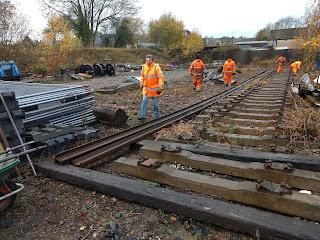 After a quick trip to Alderton to fill up the Landie, we came back to find that the 4 lengths of rail had already been tipped out to one side. That was quick ! 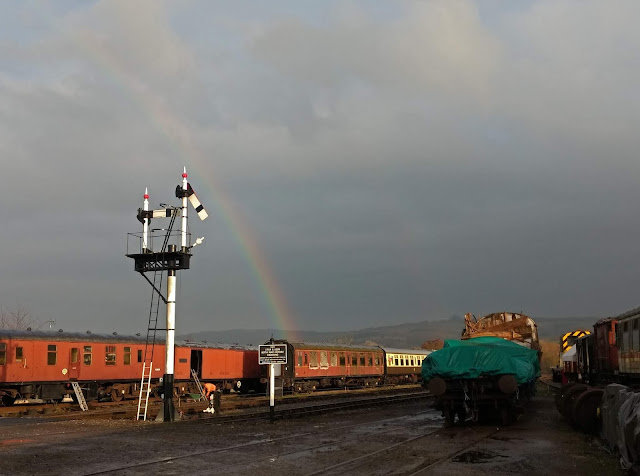 The weather turned to 'changeable'. You can see it on this lunch time picture - the rainbow lands on the crock of gold - we said gold - which is the rather ratty new arrival TSO with the 3 missing windows. But behind all that the next dump is already approaching resolutely from the frozen north. 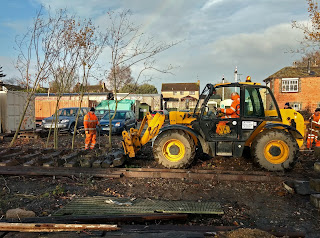 With the sleepers freed from their 4 tons of rail, we were able to get the Telehandler in there to lift out the concretes, which are fitted with cast iron Pandrol base plates. It's not a regular arrangement for us (we have mostly SHC clip concrete sleepers, and wooden ones with bullhead chairs) but we got 48 sleepers out. With the 12 behind the camera that makes 60, so they could be useful in a new or resleepered siding elsewhere on the site. 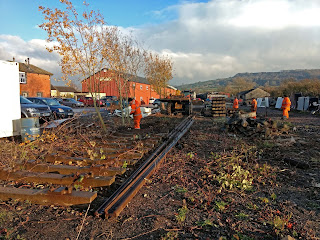 Near the end of the day we had two nice stacks of sleepers on the go, and just 8 more to lift out. 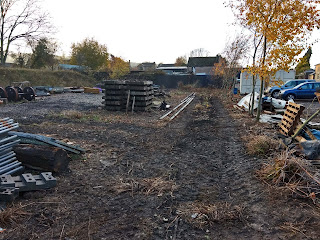 As the light fell, our Pointless Siding was no more. 48 sleepers are stacked and 4 rails await collection. 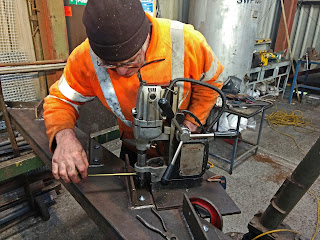 We had another day in the shed on Monday. We made sure the stringers were all straight, and then drilled them so that they could receive the tie rods holding them together, once in place.

The items to be galvanised now need to be degreased. Next Monday has been penciled in for collection by the galvanising company in Hereford, and they could return within 4 days. Once back, the whole kit will be primered and then it's ready for sending to Broadway.

A small team has volunteered to start removing the worst of the graffiti. As graffiti on our bridges is new to us - it only started appearing after the new housing estate was built next to our line at Bishops Cleeve - we have no previous experience in removing it. We have some special removing fluid, but it's not been tested on brickwork.