Cloudburst stops play, but not if you're indooors.

We had a full complement of faces today, but with the absence of our Maximum Leader, away on a personal mission.

As the rain belted down outside with monsoon like quantity, we sat indoors and contemplated our mugs of tea, and now, with a wink to the coming season, even with hot mince pies.

We consulted Dave P's smartphone for a weather update. It said:

Afternoon - getting a bit better.

We gave it an hour to get better, but it didn't really. Finally there was no way round it but we had to go outside. 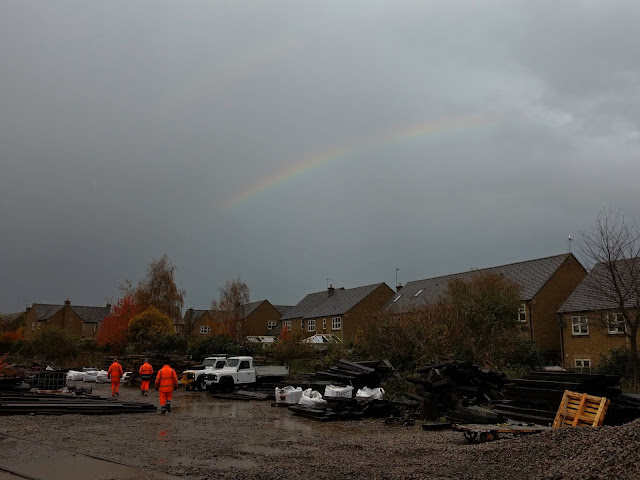 A glimmer of a rainbow showed that the sun was up there, but mostly hidden from view. Rather than the scheduled fishplate greasing session in the middle of nowhere, we decided to sort out the yard, within easier reach of shelter. 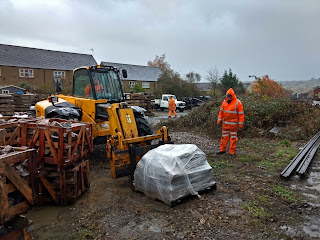 It was time to move the Usk material, after all, it had been sitting there for a good month now.

Now, we want it over here.

Peter is well kitted up and standing in the rain being banksman.

Other, wiser volunteers observed the scene from a drier location...


We decided to call an early lunch, and give the weather some time to improve. Which, to our amazement it did too. 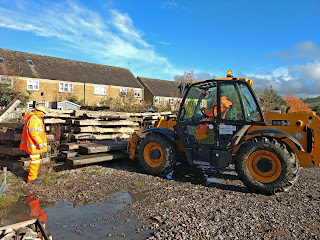 This was the weather after lunch - a bright blue sky appeared, as we chewed away over our tuck.

We're clearing a path to these piles of SHC sleepers here. They will be needed for an embankment repair at Stanway soon. 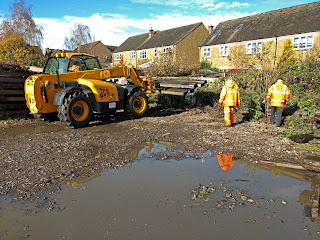 The point timbers were in the way and were dropped off on the other side.

Mind that puddle. You can get wet not only from on top, but from underneath through your boots as well. Been there, after all. 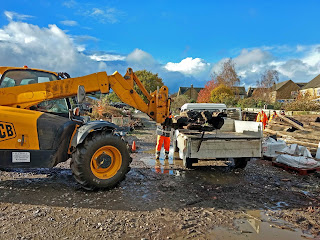 As the sun got brighter and brighter, and the Telehandler was out, we also decided to manhandle a few of the heavy, chaired up throughbolters, now that we have a tipper Landie. 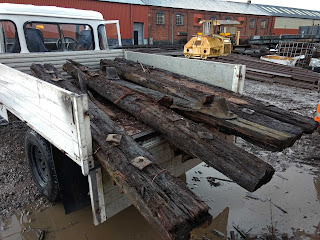 This is what we're talking about. What you see is the bottom of GWR thoughbolters, and when you try to undo the seized, rusted up nut on the other side holding the chair on, these square bits simply revolve in the rotten wood.

These boyos are going to be dismantled and the chairs taken up to the 2807 gang to be turned into boot scrapers for cash.

After lunch a brave gang also took the risk of going to Stanton to continue with the fault repairs going south.

Their gamble paid off, they staid dry, and the list of faults there is shorter again. Well done. 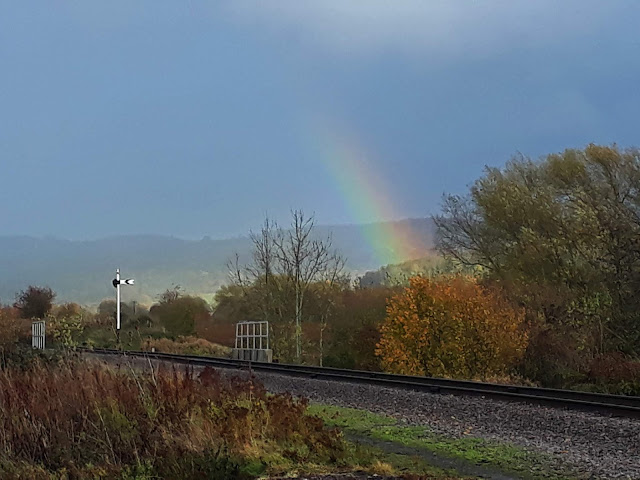 
Earlier in the week:

With a scrap drive imminent at Winchcombe, a couple of us rescued three 8ft lengths of rail for further use at Broadway as signpost supports. 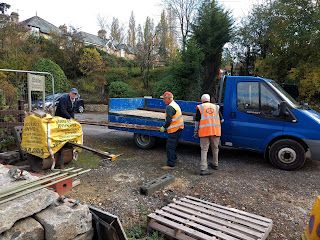 One will go at each end of the footbridge steps, to support the cast iron sign that we bought at auction a few months ago: 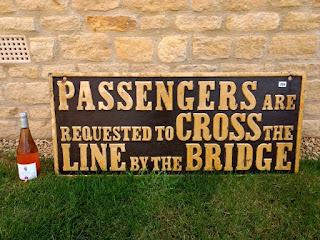 The wine bottle was in celebration of finding it of course, but also to show the relative size. Note that passengers are 'requested'. A later model was more gruff and just said that they 'must'. We are after the earlier 1904 model.

We still need a second one of these, does anyone have a spare one to donate or sell? 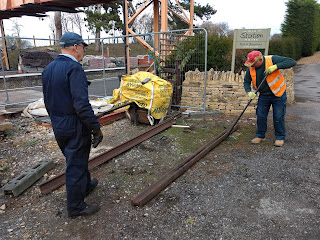 Those rails may be scrap off cuts, but they are still heavy, and we needed a bar to get them moving across the ground. 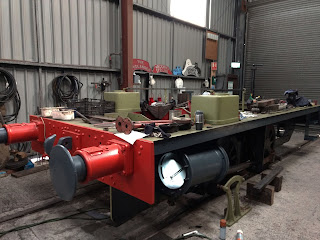 Then it was off to the loco shed for a bit more footbridge steps work.

There was drilling going on at the other end of the shed. This turned out to be a specialist contractor come to stitch a crack in the cylinder of our Peckett 'John'. 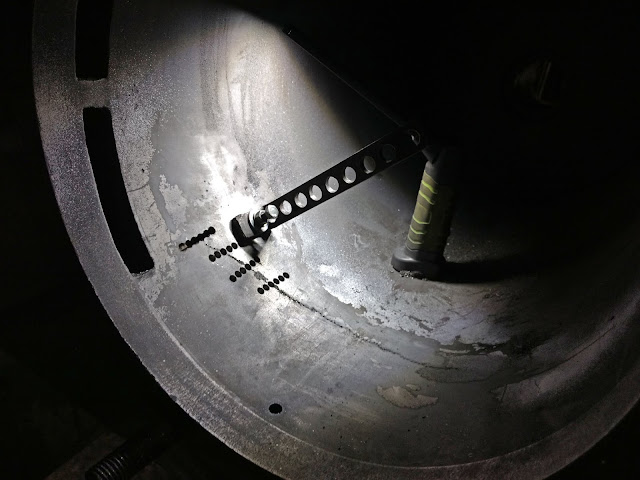 These smartphones are marvellous - just look at the detail on this close up of the stitching inside the cylinder. You can see the crack running top left to middle right, and the rows of holes drilled across it (not all done yet). 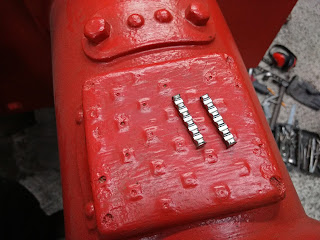 The holes are then joined up, and these stitches are inserted. Works a treat. A man with a van will do virtually any cast iron stitching on your site. He could even do our spare water columns. 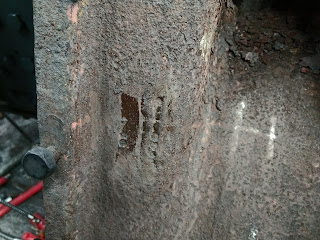 If you think this is a modern excuse to avoid having to buy a new cylinder block, here is one that BR did earlier.

It's on 3850. It's by the bye, as there is a huge crack in the other cylinder and the whole block will be replaced by a new one in the case of 3850. Even stitching wouldn't help here.


And on to more work on the footsteps. We're still waiting for the 'squeezer' but in the meantime there are more gusset plates that need fixing. 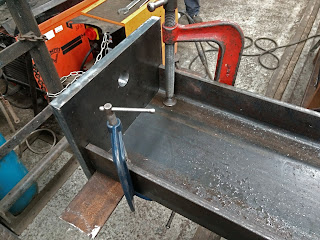 For example this one. It's at the bottom of the intermediate landing supports, so there are 4 to weld on. The big bolt hole is one of two with which the leg will be bolted to the concrete foundations. 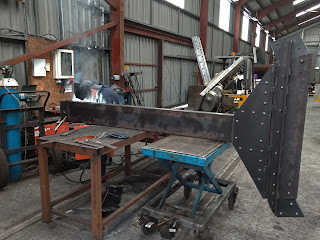 Once the gusset place was clamped into position we revolved the whole leg bit by bit as John ran a weld right round it.

We did two - well almost two. The second was nearly done when the MIG welder started to play up, welding the copper wire repeatedly to the nozzle. We repaired it at least 7 times, what is going on there?

It looks as if we will be riveting again on Friday. If the squeezer can't be borrowed in time, we will simply carry on by the same method used up to now. It's a bit slower, but just as good.

We should have an update on the aqueduct replacement as well, within the next couple of days.