Our mission today was to complete the barrow crossing at the southern end of the platforms at Broadway. 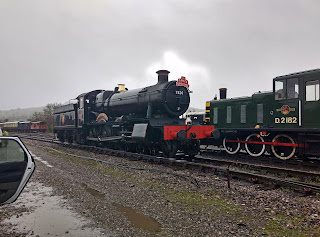 After a relatively quiet month with rather fewer trains, we are now back into the Santa Special season.
As we loaded up the Landies Dinmore Manor drifted by to pick up an ECS train from Winchcombe, and head off to CRC. 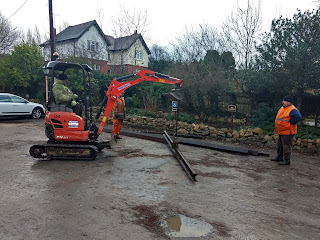 Once at Broadway, still in a persistent drizzle, we were delighted to find Stevie and a load of 4 rails which he had positioned the previous day, together with a mini digger.

That was us then, kitted up and ready to go. 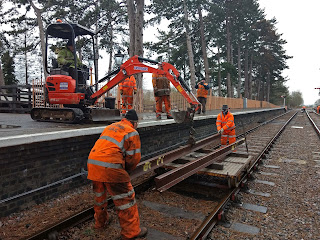 The 4 rails had been sawn approximately to the right length, so that they were not too hard to manoeuvre through the gates and on to the Permaquip trolley waiting below.

The first plan, to access the site via the new car park, was rendered impossible by the resumption of work on the bellmouth. Hence plan B, access via the platform. 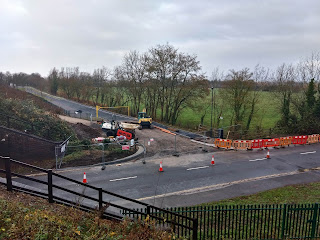 The work on the bellmouth is doing well, they look to be about halfway there. It's two weeks at this end, then two weeks at the other. Completion of works is scheduled for mid-January. 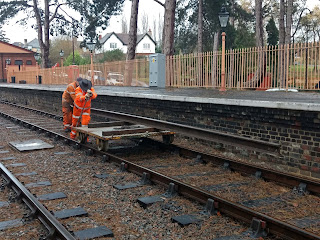 The Permaquip got the rails down to the end of the platform in fine style.

This rail weighs about half a ton, yet Diana managed to push it along just fine on her own. 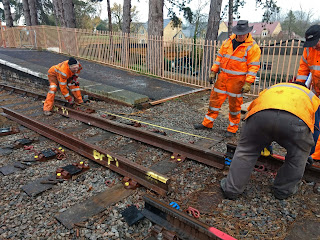 Four of us managed to yank it off the trolley and drag it more or less to the place where it was wanted. Then it was time to measure up precisely. 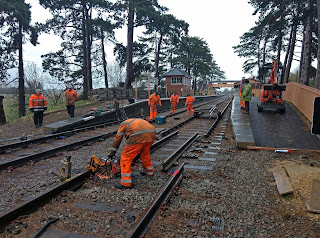 Bert then jumped in with the disk cutter, and hacked off about a foot. Steve had also come down on the mini digger to help us lift it in, but we managed without. We're strong, see. 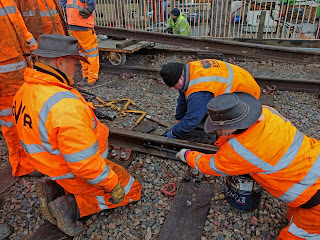 Four of us having lifted the rail into its gap on the P1 side, it was time to fit the fishplates.

Diana gives the finishing touch with a healthy helping of grease.

The bucket of grease looks dangerously close to her, it's fiendish how the grease always finds a way on to your clothing, even if you are definitively holding it at arm's length.


Dave then tightened the bolts with the 'animal' and  that's one line of rail reinstated. 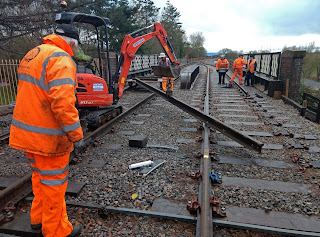 The second set of rails was somewhat heavier than the first and needed help from Steve and his mini digger. 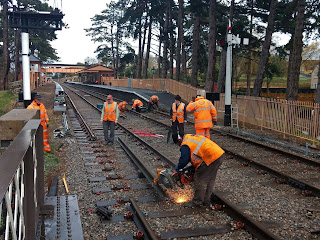 They were dropped into the four foot and also cut to size. We did a lot of cutting today.

One last rail to go, the first two are being drilled.

We were somewhat surprised to find that the fishplate in the foreground didn't fit an existing pair of holes. It turned out that one pair had been drilled into the FB rail to a bullhead pattern!

A schoolboy clanger on the PWay gang. 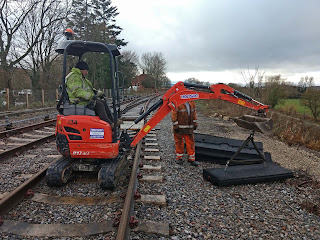 Steve then set off for the second job for which the mini digger was hired in: lift the heavy rubber pads off the pile by the bridge on to the trolley and bring them to the crossing site. 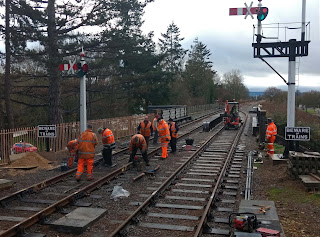 A little train of mini digger (locomotive....) and Permaquip trolley then slowly made its way across the bridge.

On the left Dave is still drilling holes. There were a lot of these too today.

But all the rails are now in. 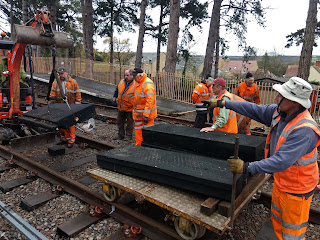 Here come the rubber pads, and the first one is already up in the air about to be fitted.

We fitted the first two in the middle - they close together like a pair of doors and lock each other in - and then we declared lunch time. 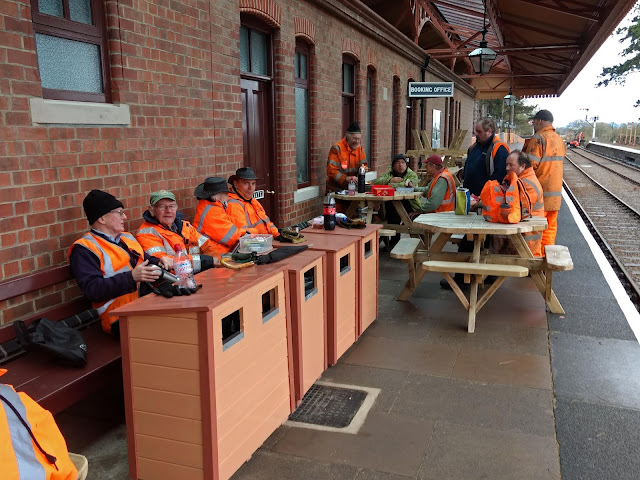 Lunch was taken al fresco under the Broadway canopy.

It seemed to us almost as if the tables had been set for us specially. With these bins with sloping tops, we felt like schoolboys behind a row of desks. 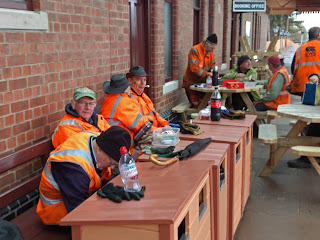 Wake up at the front there! Pay attention !

'Watch the board, while I go through it' (as the blogger's French teacher was wont to declare). 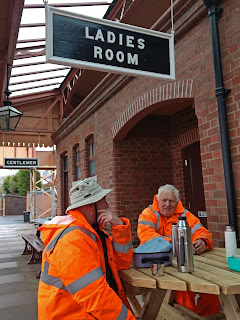 Others sat by the Ladies Room, or should that not be 'Laddies'? 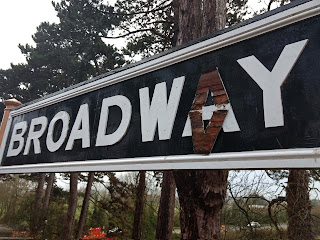 On the way back to the barrow crossing, we noticed the BROADWAY running in board looking a bit sad. Letters in plywood delaminate in just 4 - 5 years. Luckily a replacement set exists, cast in Aluminium from genuine 12 inch examples. 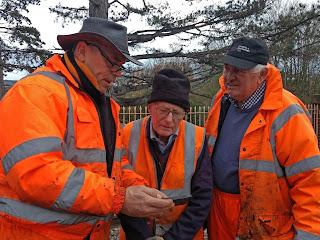 Dave then showed us a film from his day job flying biplanes for wingwalkers - thrilling stuff!

It involved a wingwalker holding a gift wrapped parcel for Christmas - on top of a Stearman up in the air.

Well, we're not coming to open that! We'll find ours under the tree, thank you. 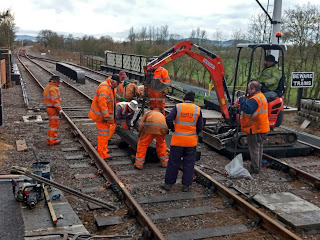 With Stevie standing on the P2 pads already fitted, we lifted in the second pair on the P1 road. Now the replica BEWARE of TRAINS signs we had cast make sense. 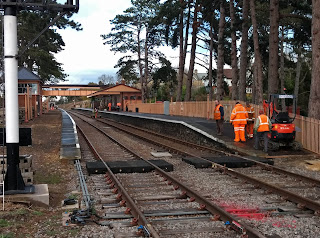 Mid afternoon the whole thing was in. Well, it gets dark soon as well, we still have to go back to Winchcombe and tidy up all the tools.

The pink patch in the foreground? Well, that's what you get when you drop a half ton rail on to a tin of marker paint. Didn't half fizzle. 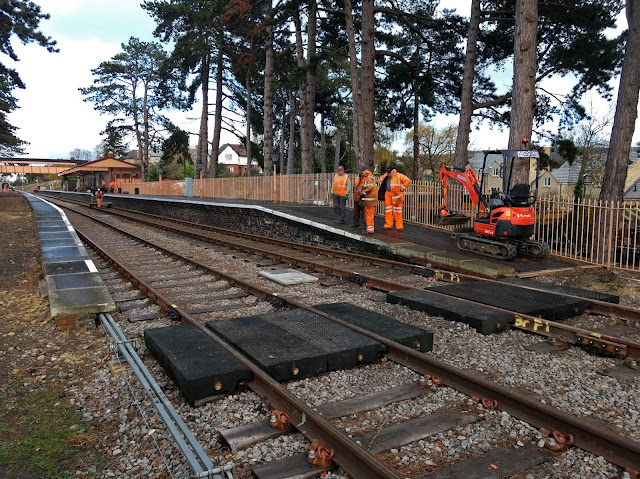 Here is the southern barrow crossing then, fully fitted with replacement rails (flatbottom where there were bullhead) and chairs (pan 11 instead of classic bullhead chairs). We also fitted another insulated fishplate.

To complete the crossing, it still needs an infill in concrete in the middle, an infill of ballast or similar beyond the end of the platforms, and a cover for the rodding and wire runs planted by S&T. All perfectly do-able. 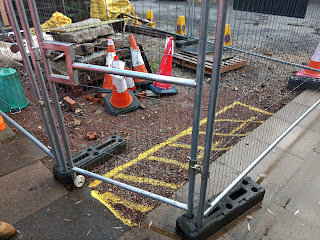 An area has also been marked up by Neal for a trench to be dug by the bottom of the footbridge steps. This was due to be excavated today, but was deferred due to lack of time.
Footbridge steps

With an imminent collection by the galvanising company, there was some last minute fettling of the roof hoops on Friday. We spent some time discussing the logistics of the collection, and a telephone call to agree how and when (in fact Wednesday of next week). 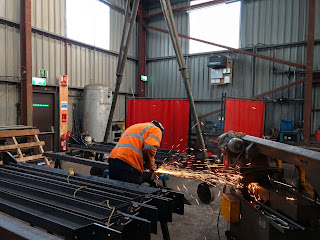 With the steelwork for the steps complete, we turned our attention to the existing canopy extension items, which have been parked next to the goods shed since it was discovered that the builder's design was far shorter than they used to be.

Originally the canopy overhang, we discovered, was simply another ridge purlin length of 7.50m. The final length of purlin called for by the design however was just 4.00m, leading to a very small circulating area under cover. Such a shame, and not at all original. 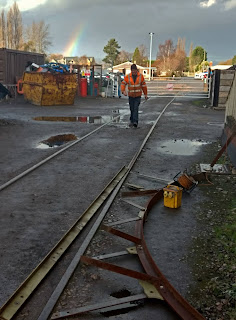 Neal has developed an amended design, which was approved by our structural engineer. It will provide a longer canopy overhang, up to the limit of what is possible, given the position mismatch between the building and the footbridge.
To handle the greater length, the ridge purlin here will be stretched by 2.00m to 6m, the best we can do given the situation with which we have been presented.

The rainbow is pointing to the scrap bin, maybe that is where we will find the extra length?

Neal has the big angle grinder out, to cut the 4.00m ridge purlin in half. All of it will be used again, but it will be longer. 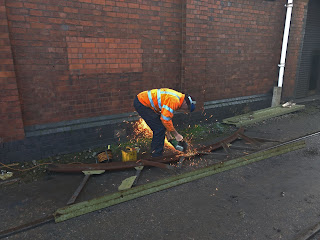 It didn't take Neal long to cut the arch. The angles at the top were simply unbolted, as this construction hadn't been riveted yet.

All the pieces were taken inside for refurbishment after a year in the rain, and new lengths of angle found for the insertion into the middle 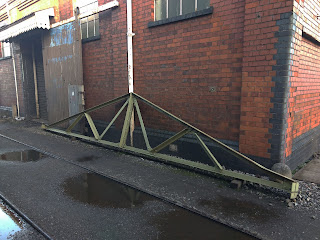 The fascia board we have also needs stretching, but this truss is ready to go.

After a bit of negotiation and cajoling, we have after all received agreement to purchase the remaining steel for the canopy extension, which is excellent news. This means we can make a start immediately, in the last month that we are still allocated room in the loco shed. Good news !