I am just going outside, and may be some time...

Famous last words, and we pretty much uttered them as well today.

The day kicked off with a miserly 0.50 degrees above zero - still positive, see? - but there was ice everywhere.


The forecast was dire - frost overnight, followed by sleet, strong winds at lunch time, and then heavy rain.

Ho-ho. Better not spend too much over tea then, let's get going and beat the heavy rain after lunch.

We're now at the stage where we are preparing for the winter relay between Toddington signal box, and the turnout we installed a year ago. This is our oldest stretch of track, and needs a refresher course.

The relay will involve the same track components, but new sleepers and ballast throughout.

The original wooden sleepers, when laid in the 1980s, still had their chairs bolted on, and these in many cases were GWR throughbolters, impossible to remove today, or indeed re-use except for 2807 boot scrapers. 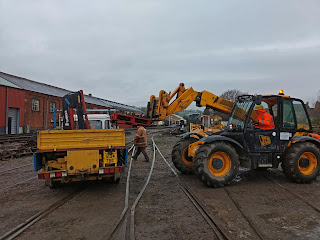 All the rails were assessed and labelled last week for re-use, cutting or complete replacement with better s/h from stock.

120 throughbolt chairs were identified, and the job today was to position 120 replacement 3 bolt chairs opposite the sleepers in question.

A cast iron chair weighs a bit over 20 Kilos, so we were faced with loading something over 2 tons of them.

Great was our relief when Alan appeared with the Telehandler and lifted an entire pallet of them onto our Landie. It wasn't quite as easy as that, as we had to fill the rest of the space in the back by hand, and of course there was the manual distribution at the other end. 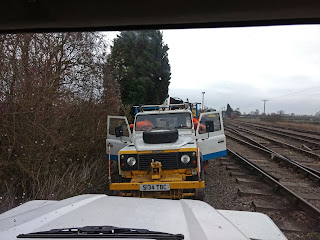 The two Landies drove to Toddington and met by the southernmost turnout. There we also unloaded a double Permaquip trolley, so that we could run up and down No.1 siding with our heavy load.

Of course we spoke to the signalman first. All he wanted was to tell us that there was a power cut, as if we cared out here in the storm. Hope it didn't affect his heating.... 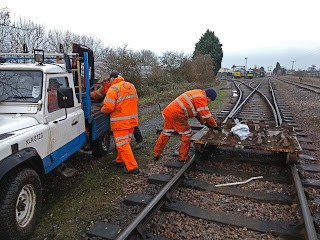 We know it's grim up North, but it can be grim down here in the nice warm south too. The fierce wind nearly ripped the Landie door out of your blogger's frozen hands. We were on Maximum Raingear setting, hats pulled right down over our eyes, as we pulled the 20Kg chairs off the Landie
and tossed them on to the trolley. 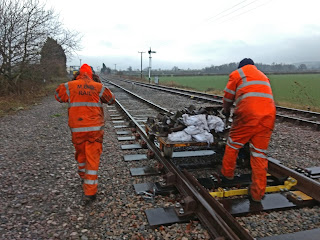 Have I done my zip up tight, right under my chin? Can it go any higher? Off we went with the trolley down to the signal box, checking for GWR throughbolters in the howling wind. It rattled the rain on to our backs like hail. 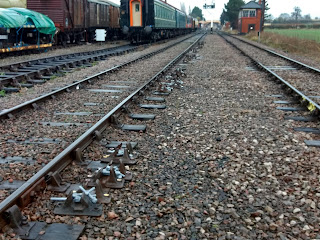 The exercise was done 3 times, and after the third time we had shifted the two tons of chairs and just about had enough. Here are the 120 chairs all laid out at the appropriate places, each supplied also with 3 new bolts. January then will see us rip up the track on the right, dig out the old bed and replace with new clean ballast.

If the picture is a little blurry, it's because of the constant buffeting and it was impossible to get any sharp pictures at this stage.

A bit warmer was:

Friday in the loco shed

Well we had a little central heating, in the form of a large steam engine boiler quietly hissing away to itself.

We were there to get on with the canopy overhang construction, but got a bit waylaid on Friday with other interesting things. 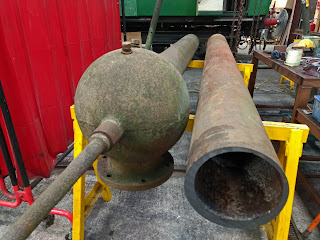 One of the two cast iron water cranes that we have in stock was taken into the shed for inspection and repair. This is one of two recovered from Church Stretton many years ago, but it got damaged in the removal and had a long, circular crack around the bottom end.

Neal cut this off, revealing how the core of the casting was not central at this point, no doubt so contributing to a certain weakness here.

The two halves will be castellated and then stitched back together. 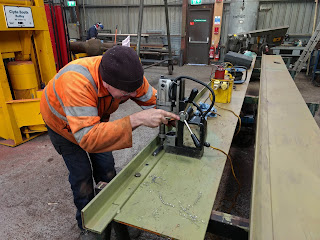 Neal was delayed with a family issue but eventually managed to make a start on drilling the 240 holes. Here he is working on one of the two fascia boards. 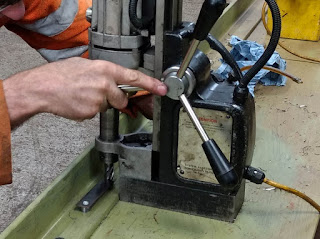 He made himself a lovely little gadget to space the holes from one to the next. There's a short piece of bar turned to the size of the rivet, and a spacer screwed to the top which points to where the drill bit must go for the next hole. 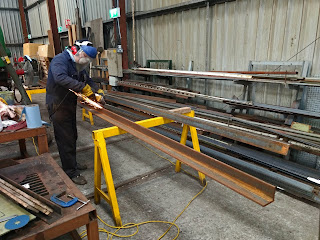 The other two 'canopy makers' spent the morning cleaning up two 6m lengths of angle, which will be attached to the other side of the two fascia boards.


At the end of the day they too were ready to be fitted, and painted in primer. 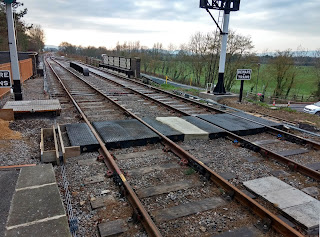 We decided to go to Broadway for lunch - a). To measure up for the height of the canopy supports, and b). To see the sampling of the new tables and chairs for the cafe.

In between came a quick look at the southern barrow crossing installed by the PWay gang. It was good to see how S&T had picked up the baton and started installing the concrete approaches and central infill. 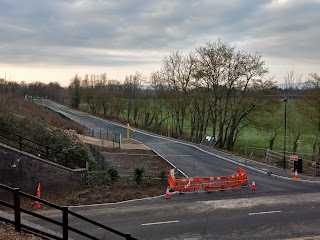 Down below we could see the northern car park entrance. The bellmouth is now finished, and the contractor has moved on to the other one on the Childswickham road. There is some nice kerbing work done, and our access to the trackbed on the embankment is clear. 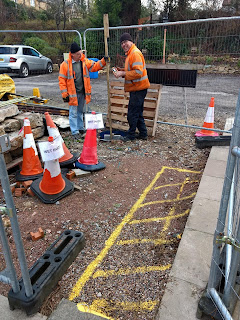 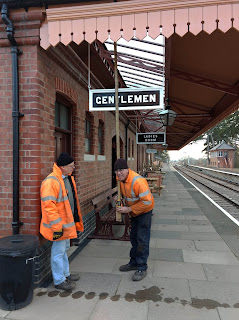 We came to do some additional measuring, and here are Neal and John taking readings from the truss downwards, and from the concrete foundation for the supports upwards.

On the right is the 900m deep trench still to be dug out for the foundations of the newel posts at the bottom of the steps.

In the original Broadway layout, with the footbridge and building in the correct relationship to each other, the canopy support post would have not been where Neal and John are standing but in the far end of the yellow striped newel post pit, which itself should have been located a further 3m to the left.

Then we joined a delegation from the catering dept there to see the samples of the tables and chairs that have been selected for the cafe. Opening all the boxes felt like an early Christmas! Neal, with his mechanical skills, was appointed chief assembler, while one of the chairs was tested for comfort. It passed. 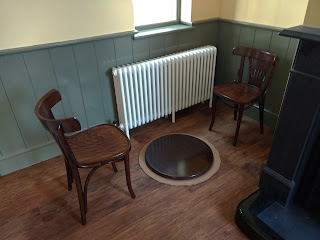 The chairs are in an old fashioned 'bent wood' style, with an attractive looking fan shaped design in the back.

The two niches left and right of the fireplace have just enough room for a smaller, round table and two chairs. The radiators are still modern white as out of the box, and would look better if painted in the green of the wainscoting. 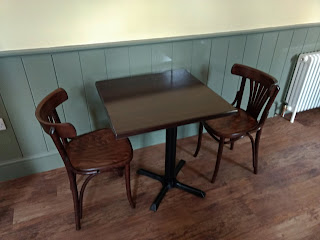 The normal sized table will be square, with a single leg. Although this is a little less in period style, it is not really possible to have tables with 4 legs in what is quite a narrow room. There needs to be room underneath to get legs sliding under from the sides. The table will be covered in a table cloth.


The tables will be in groups of two down each side, leaving a central corridor. In this way the capacity looks likely to be in the range of 24 - 28 places, depending on how much space is allotted to things like customer freezers and chiller cabinets.


All in all the tables and chairs were rather good, we felt. 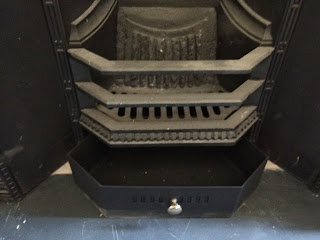 A small but excellent detail is this ash pan made by Peter K from the Broadway group. The fireplace we bought came without, and Peter made this beautiful one off special, which is moved in and out with a lovely little brass knob.

We wonder how it will get supplies of coal? Traditionally one went to a passing loco with a bucket and pleaded for a few lumps from the well filled tender. Will we carry on that tradition?


Then it was back to Toddington to carry on drilling holes, and to finish cleaning and painting in primer the next lot of 6m long angle. 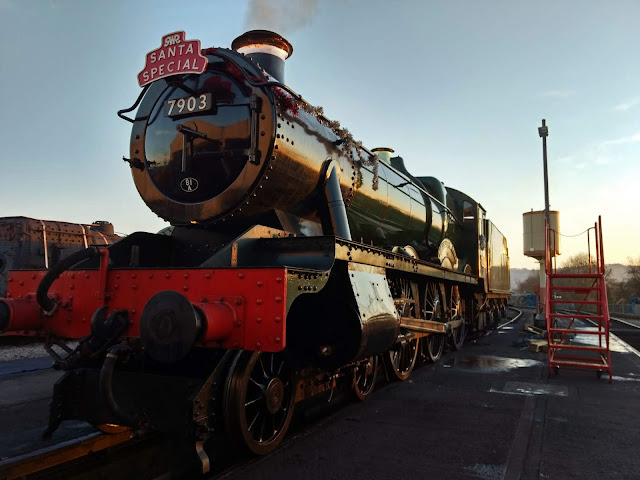 As the sun started to disappear over the horizon it left a lovely glint on Foremarke Hall, which was being made ready for today's Santa sessions. 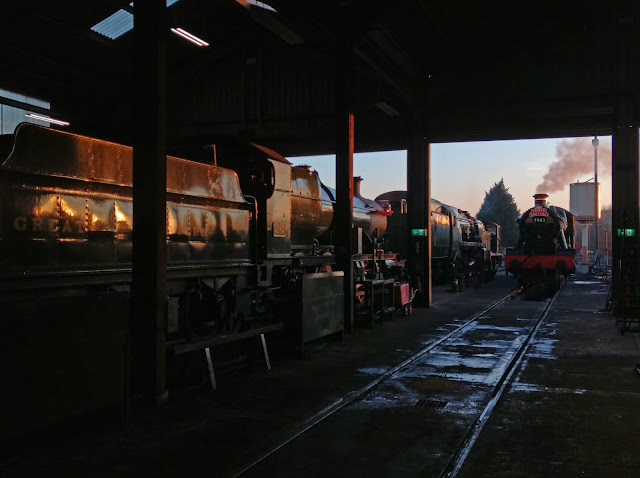 Lower and lower went the sun, until its orange gleam reached right into the shed.

This is what we are here for.