The 'Grease' bit of the title didn't happen. Once again it was cancelled due to heavy rain forecast.

It also has to be admitted that our spirits were a bit low as very few volunteers had arrived by the usual time, leading us to think we were going to be short. And yet, one by one they trickled in, although some seemed to have confused 08.30 with 09.30.

All things said and done, and seeing a huge scrap steel container on site, we decided to sort out the yard instead, while a small team went off to Gretton to replace the seized bolts discovered during the greasing session last week.

But first tea. Stevie had secured himself a place first in the queue, right next to the tea preparation area. He was there with newspaper on the table, a tabloid which he skimmed before announcing, with a sigh: 'What this country is doing wrong is....' We could only nod sagely.

Meanwhile Maitre d' Paul was sputtering in the background. He had an important announcement to make, of a very serious misdemeanour which could not go unanswered. Paul waited patiently until the very last volunteer had finally rolled up. The excuses were wide rangeing: The M5, a queue at Ashchurch, following a slow lorry, a warm bed...

Finally Paul stood up to announce the very important, serious misdemeanour: Last week, person or persons unknown had put an old pound coin into the tea fund! Threats of severe retribution followed, if only the perpetrator could be reliably identified. Sadly, he could not, leaving Paul fuming and a whole pound short.

You're probably wondering, why all this long written preamble, but sadly your blogger forgot his smartphone today, leaving it charging in the kitchen at home. Hence no photographs today, and a couple of missed calls too.

We tidied up the yard of useable, rotten and resaleable sleepers, and emptied 10 tons of scrap rail lengths into the skip. It was only a quarter full, but that was the most the skip lorry could lift, we were told. There is certainly room for another load.

At the end of the day we did a special trip to Toddington, to take the Usk weighbridge mechanism, basically a cast iron column and an arm, to the garden of a supporter. What he plans to do with it is not known, but due to its weight, we do not think it will be travelling a lot further.

Finally we had a look at the site of the new goods platform, where Stevie has spent Monday and Tuesday digging out a 30m trench for the new platform. Immediately that trench was filled with concrete, so that the site is now ready for the start of construction of the actual platform wall.

So that this Wednesday's report is not completely devoid of photographs (but see the Monday report on the footbridge steps below) here are three photographs from the Early GWSR section of the Railway Archiving Trust (Aka the RAT) that you might enjoy: 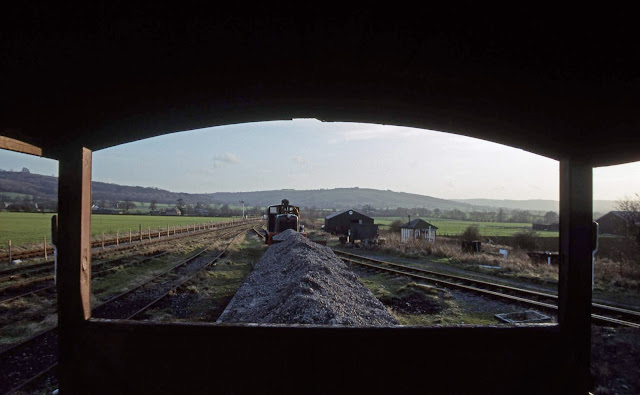 It's a PWay train (of course) parked in Toddington yard, loaded with ballast. Two volunteers are pouring something into the bonnet of the Fowler shunter at one end.

Note the signal post with a cross on, the grass covered yard access and fenced off running line, and early days at the NG narrow gauge, with California Crossing signal box visible.

Looking the other way, the unknown photographer climbed on board the Fowler and looked north: 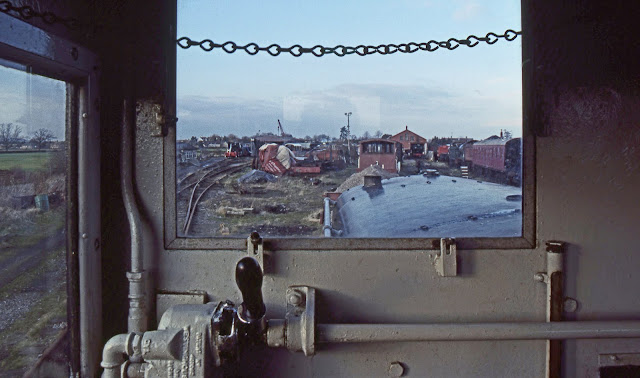 Here we see the Dowty shed on the left and on the right the open end of the goods shed with a locomotive parked in it. Today that end is sealed off with concrete blocks, and indeed it will shortly receive an extension which will provide fixed welfare facilities (canteen, shower, toilets) in replacement to the very temporary facilities the loco guys have had to use for so many years. 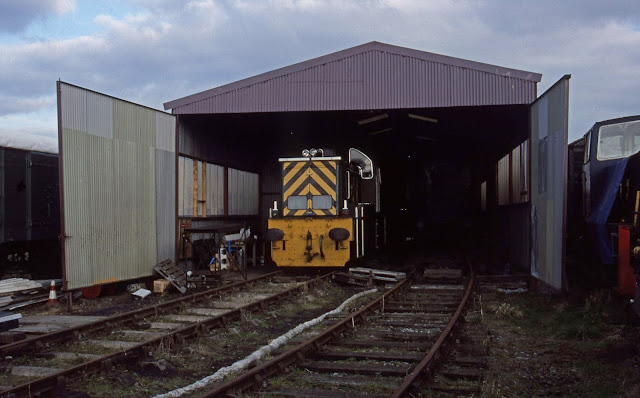 Finally a look into the Dowty shed, at the time the railway's only loco shed, with one of the three class 14 Teddy Bears that were stabled with us at one time.

Can anyone guess the year the pictures were taken?  You'll have to work it out with the pictorial clues provided.

Next week more action pictures. Unless the smartphone hides in the kitchen again.

These were made ready for transport to the galvaniser's on Monday. 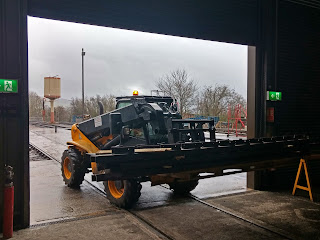 This took a surprisingly long time, all day in fact.

Six of the eight stringers were put on a large pallet just inside the loco shed, and then Neal wriggled them out through a door 3 inches too narrow to get them outside. 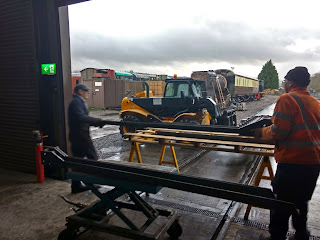 A new pallet was then fetched, on which we assembled the roof hoops and sundry bits. 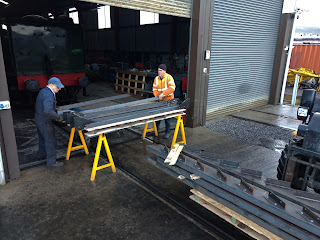 After putting down the pallet with the six stringers, Neal fetched the second one with the roof hoops and took it round to the car park

We then fetched the last two stringers (making eight) and placed them on top of the first six parked on the deck outside the shed.

After some head scratching, we were able to play with our new toy, a strap fastening kit. In this way the whole caboodle was strapped down tight on to all the pallets we had, and one by one they were steered carefully down the narrow passage between goods and locomotive shed. 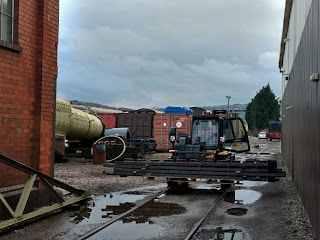 This proved to be quite tricky, but Neal is a wizzard on the little fork lift and we got it all through. 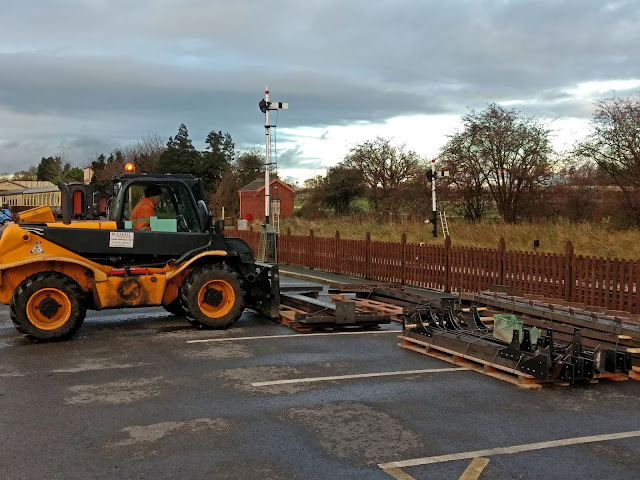 Here is the whole footbridge steps kit, laid on the ground in the Toddington car park. It's going to be picked up on Wednesday, coming back nicely galvanised and protected from rust a week later.

There's a bit of pressure now to get them up, as the station drive and forecourt in Broadway are due to be graded and tarmaced in January.

After getting a modest green light from Finance, we immediately ordered the extra steel for the canopy extension. We eagerly awaited its delivery all Monday afternoon until it got dark, only to hear that the delivery had been cancelled at lunch time. D'oh ! A new delivery date of next Monday was agreed, so we hope we can show you some progress there in a week's time.