Today we went human greasing. We properly greased up 12 humans, and in between, a number of fishplates, why not. Boy, do you get black on this kind of work. How do you get it off your gear? It all has to go back in the boot of the car afterwards. What you want is a sort of pair of wooden laundry pincers with which to handle the greasy black items from a distance. 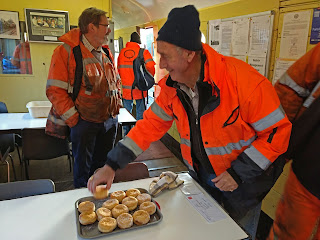 First, the pleasant things in life. Paul, with a smile !!! A legendary day, do download this amazing picture and paste it into your photo album. You may never see another....

The doughnuts were hot. Paul, bless him, had warmed them in the oven. They did not get the chance to cool very much.

Then, sad news: Stevie's dog Gypsy has died. Gypsy accompanied Stevie everywhere, and would sit in the cab of the JCB no matter what it did or where it went. After some years she found it difficult to jump up into the high cab, and instead she would sit in Stevie's van somewhere on site, waiting patiently for her master to return. Stevie left the door wide open but Gypsy preferred to sit in the passenger seat, all curled up. When she got bored, she ate the seat squab and in later years a ride in the van with Stevie meant that you sat in a deep hole in the foam rubber, your knees up under your chin.

Van No. 2 (after Van No.1 had died) was cunningly equipped with nylon seat covers, Gypsy was thwarted and had to find something else to eat.

After last week's total downpour we had brilliant day today, ideal for being out and about along our line. 12 of us resumed fishplate greasing at the start of Dixton cutting, while a small handful stayed behind and dealt with the scrap man. 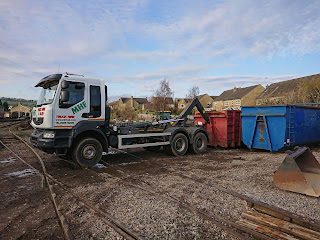 Last week's skip, filled with 10 tons of scrap rail, was collected and replaced with a new empty one, which we also filled today to a similar level.

Picture by Jonathan, for which our thanks. 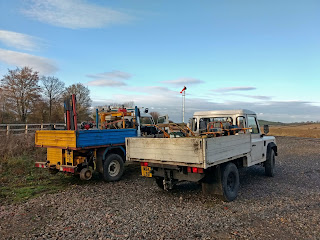 Twelve of us then loaded up all the gear (and there is a lot of it, it takes ages to load and unload) and repaired to the yard at Gotherington Skew Bridge, now mercifully emptied of the 7000 extension sleepers that were stored there over many years.


We then drove down to Prescott Road bridge, where we turned the vehicles. Peter first tested the depth of the adjoining ditch but managed to extricate the new Landie from its overenthusiastic position. It is a four wheel drive after all, so Schadenfreude will be for another day. 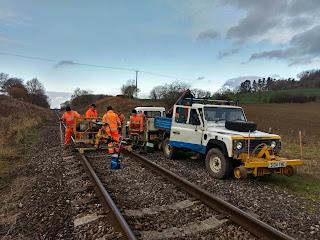 Two TB2s, their wheels, a trolley, the pressurised greasing vessel and the compressor were unloaded at the start of the long Dixton cutting where we left off last time.

Then it was 'Wagons Roll' and we headed further south into the cutting. 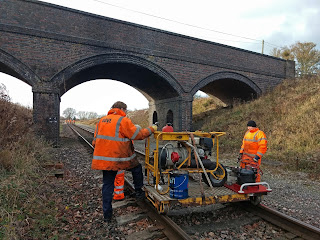 Progress was reasonably measured, although the 'undo-ers' forged far ahead of the greasers and the 'do-er uppers' who trailed somewhat as they had to repeat every action in order to get the nuts really tight.

It was here on the greasing trolley that we got really sticky and black. After all, put a gallon of liquid black rail grease into a pressurised container and then squirt it out with a pistol, that's asking for sticky trouble, isn't it?

The grease also infected the short little jemmies were were using to prise the rails apart. Both ends (curved and straight) soon became sticky and black, and transferred their insistent little cargo over your sleeves as you turned the jemmy this way and that. You then touched a colleague with your sleeve, who sat in the Landie, someone else did too, it was like an infectious disease and it spread with lightening speed. 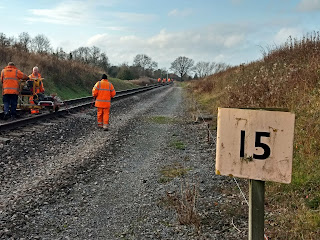 Here we are at mile post 15. Time for reflection, where are we in the great fishplate greasing venture? Broadway is mile post 5, and CRC mile post 19, so we have 4 miles to go here. We didn't really do 10 miles already, as the last 3 miles to Broadway are CWR track. We have done +/- 7 miles so far, with 4 to go, so we are two thirds of the way there. Roughly; there are two loops to do further south. 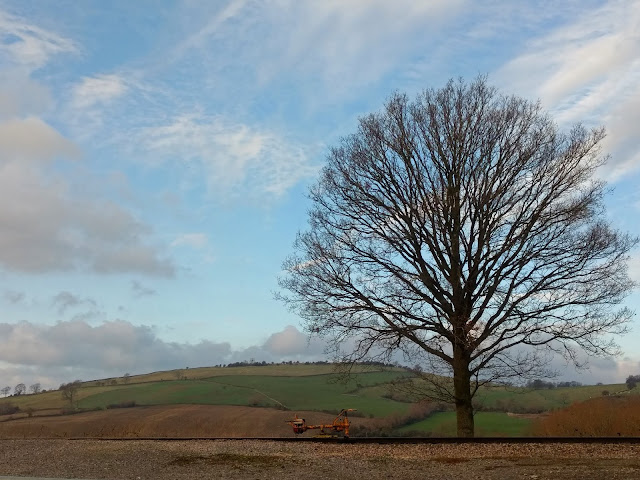 We plugged on after lunch and slowly emerged from the long Dixton cutting, pausing at Skew yard to let the 'do-er uppers' catch up. Love this fabulous scenery. 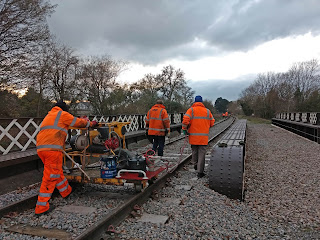 As the light began to fall around 3 o'clock we trundled over skew bridge.

At the same time ominous clouds began to form on the southern horizon, a wet end to a perfect PWay day out in the country. 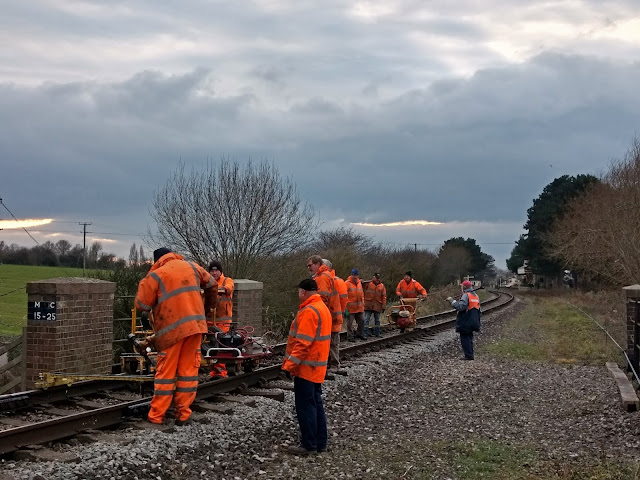 It was at this bridge where we stopped for the day, a small bridge within sight of the private Gotherington station, just visible in the background.

Peter is just doing up the last bolt, then it's back to the Landies for loading and returning to Winchcombe yard at at early nightfall.

Monday in the loco shed.


You've seen that the galvanised steel sections are back, turned round in a matter of hours. Very impressive work. There are no fewer than three tons of steel for the footbridge steps. 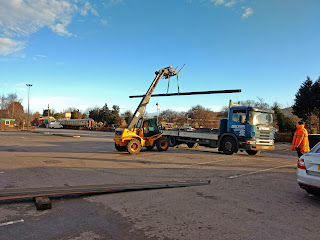 With a bit of luck and a little bargaining we were in the end able to prise the £3000 out of the Finance Director's tightly clenched hands and ordered the remaining steel for the Broadway canopy extension.

Here it is being unloaded from the lorry. In the picture is a long section of 6 inch box section, enough for two uprights, which will support the new end of the canopy. They will be shaped at the bottom to resemble the cast originals. 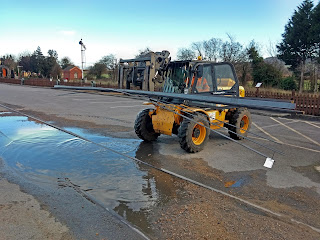 After the box section, Neal collected another load of angle and some sundry items. 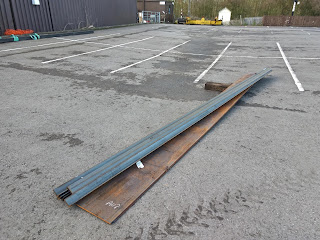 In this picture you can see 2 six metre sheets of steel and four angles of same length.

These together will make up two fascia boards.

The end truss is already complete and ready to go.

The arched ridge purlin is half done - it was initially too short, and we will now lengthen it to 6m, as opposed to the original 7.5m - that's as close as we can get under the current relationship between bridge and building.

If you imagine a 6m circulating area under the canopy extension, as long as the steel in the above picture, you can get an idea of the size of the canopy extension and the room that was designed to be under it for people to circulate. It was all lit by a large, six sided gas canopy lamp, funded by a generous supporter and currently with the designer, prior to manufacture for us. 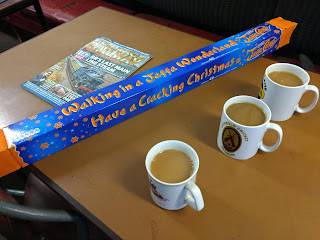 Unloading the steel, and getting the 6m sections inside the shed took quite a while and we were relieved to be able to retreat to the warm mess coach for tea, and one of the prizes won at the Broadway team's Christmas dinner - a three foot length of Jaffa cakes ! We ate 18 inches of that.... 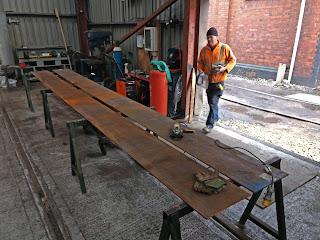 Then, to work. We started on the canopy extension straight away. The delay in the return of 4270 may give us a few more weeks in the corner of the loco shed, we hope.

Here are the two 6m fascia board sheets, ready for de-rusting. 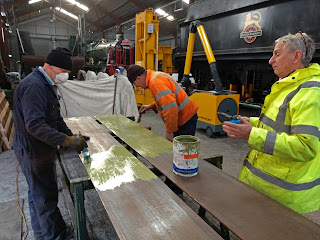 The next step was to paint one side in rust resistant primer.

While some of us scraped and painted, visitor Greg practised a little Zen on us before attacking the RAT exhibition coach (the one in the bay siding) with a refreshing coat of new paint. 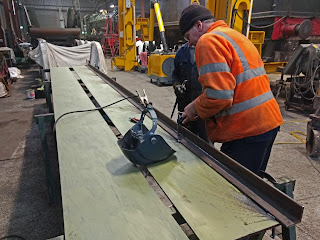 Leaving the two fascia boards damp with paint, we retreated for lunch and returned, full of Jaffa cakes, a short while after to affix the first length of angle. This was tack welded on and will be drilled and riveted in a second stage.

There are 240 holes to be drilled for this item alone, we ascertained. 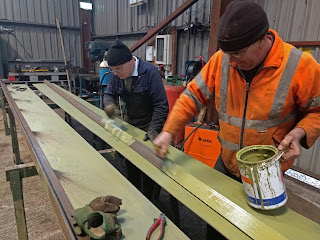 The first length of angle, on the left, is tacked on here. Neal and John are painting the second length, which will be tacked on with the paint still wet. 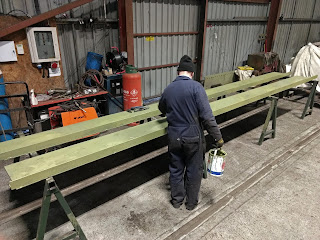 A bit hard to see in this final picture, but both angles are tacked on here. John is now applying a final coat of primer.

Next time, the fascia boards will be turned over and the other side will have the same treatment (de-rusting, painting, two lengths of angle tacked on.)

Then they can be drilled, prior to riveting.


We envisage assembly of the steps on site at Broadway at the beginning of next year, but a date has not yet been fixed.

Oh, and a historical snippet for you.

You may know that the cuttings on our 1904 line were excavated by a steam navvy, the precursor to today's diesel 360. They can be seen on early pictures of the yard at Winchcombe being dug out, as well as in the cutting leading to Greet tunnel.

A single working steam Navvy still exists, and you can see it working in this video:
https://youtu.be/paFaA2WKCGY

Note that it had a crew of three, including the fireman. The excavated spoil on our line was emptied into a train of wagons and taken to build embankments such as chicken curve, and at the other end of Greet tunnel, the long embankment through Gretton.

In early days such as at Tring cutting the soil was taken out of the cutting using horses that pulled wheelbarrows up a slope. How modern our line was!