Painting, Painting.... at least it's topcoat now. We're doing the structural steelwork in the roof at both ends, with the middle to do when we have moved the T&G stored there for the time being. 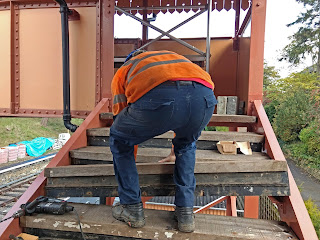 Also watching Neal attach the treads to the P1 stairs.

The treads are reamed out on the platform, then taken up for drilling new holes 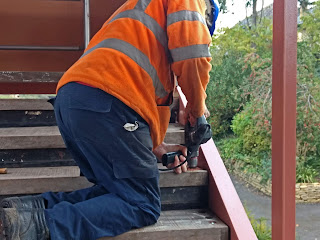 The wood is of a very hard quality indeed, so Neal has to get his back into it.

Finally coach bolts are used to attach the treads. Neal showed one coach bolt where the head had come off on tightening. Didn't know that was even possible! 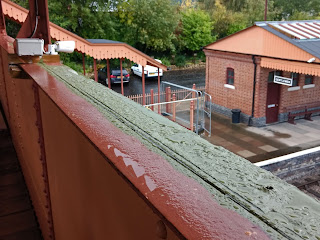 Although only 'showers' were forecast today, it actually came down in stair rods over lunch time. There was wind too, flapping the trousers as you stood up on top, painting under the roof.

The rain water sat on top of the angles... 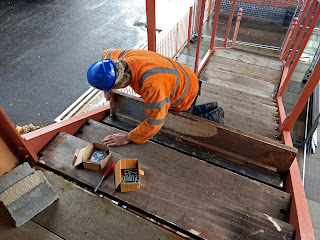 Here is Neal on his third tread of the day. 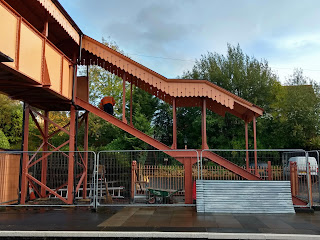 And almost at the top now - just two more to go in this picture.

At the end of this very wet day Neal had got to the top! Yeah ! Now to sort out the landing.

Saturday at Winchcombe and at Gotherington.

It was Food fair day today, with 4 trains out and about. 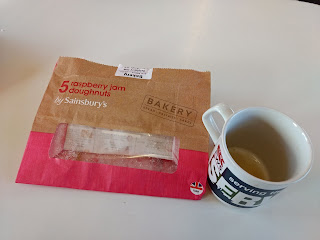 Wish we had some food...

Doughnuts and tea this morning were soon gone. We had more attendees than usual (at least recently) and we were 'doughnut poor'. 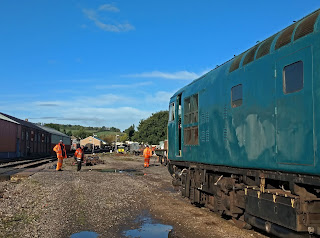 The Food Fair preparations meant that there were 4 trains out today, of which 1 DMU shuttle. Here is the class 26 outside our mess coach, in the process of picking up the third rake.

The Sulzer engine has a slow and rather pleasing relentless throb, with a tickover speed of just 250 rpm. The absolute red line, we heard, was a mind boggling 750rpm. A bit like slow cooking, or slow TV. Potentially boring, yet somehow fascinating. 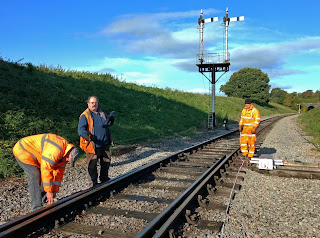 While part of our team stayed behind to write risk assessments, the main gang repaired over to the southern Winchcombe turnout in order to carry on recording our track assets. 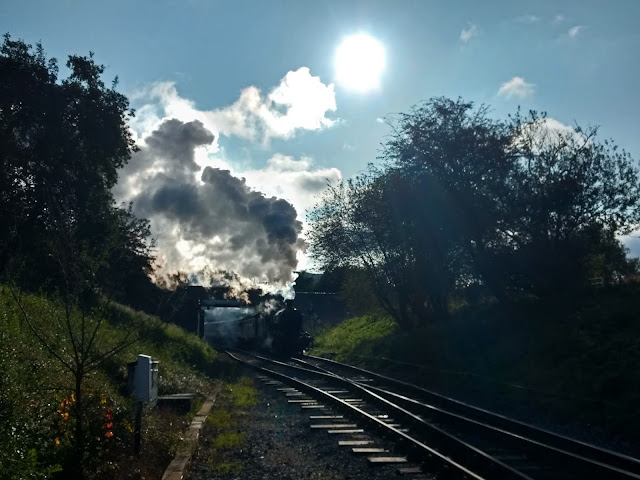 We soon had to stand aside to let the first steam hauled train pull out of the station. The camera angle, obliged by the position of the team standing aside, was full into the sun, but the effect was actually quite good. 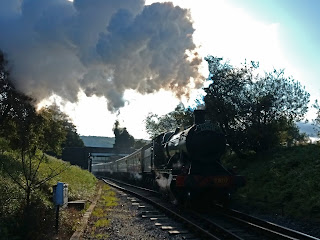 It was 2807, said to be counting down the days when she would be taken out of service for an overhaul, so enjoy. 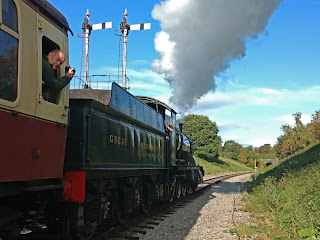 This was the first service south, so largely empty, but certainly worth filming as the loco climbed up the hill to the summit of the line. 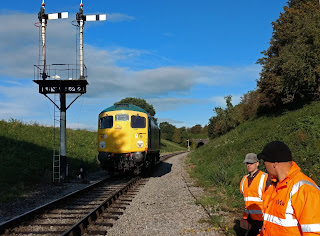 Next was the class 26, which paid a fleeting visit while running round its third rake, extracted from the sidings, to head north. 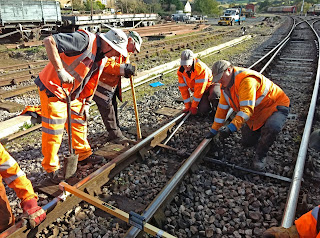 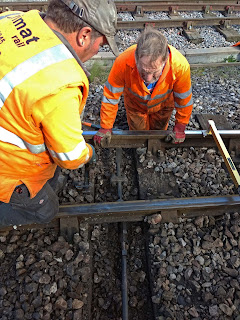 After measuring up the point, and with the main traffic now north and south out of Winchcombe, we went over to the other end of the loop through the station, where we fitted two tie bars. Track walkers had noticed that there was some movement in the chairs here, a sign that the timbers need replacing. We will order new ones. 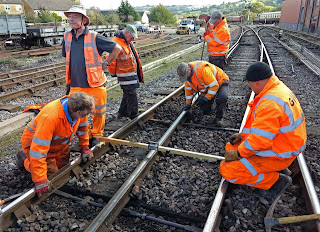 After fitting the first tie bar (which is insulated, to avoid interfering with the track circuit) David measured the gauge. Normal gauge is 1435mm of course; here, in the curve of the turnout a slightly wider gauge of 1445mm is required. It was interesting to see the gauge slowly contract as we tightened up the tie bars. 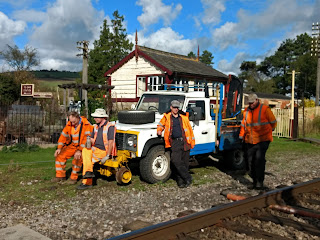 While at Winchcombe, we broke for an early lunch in the mess coach.

Lunch is followed by the graveyard hour, as any teacher will tell you.

The team arrived at Gotherington north turnout for measuring once more, but a little less enthusiastic. 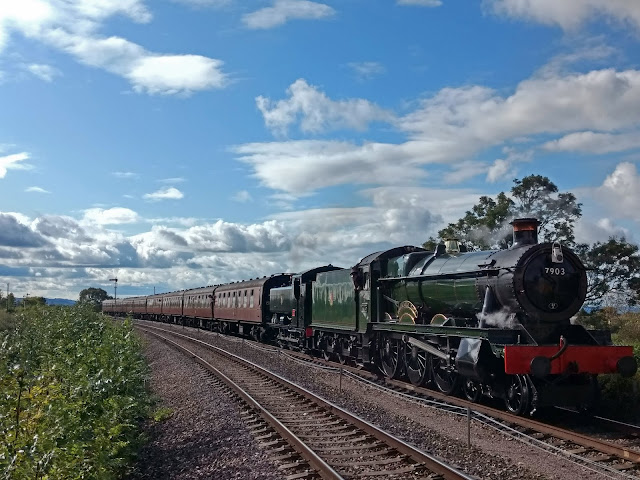 Being at Gotherington, we happened to coincide with the place where trains were crossing today.  This saw Foremarke Hall piloting the new arrival 9466 from the WSR. This was its first outing with us, and we presumed a test trip with a reserve loco, in case of trouble. It did allow this fine shot of a double header on the railway, not something you see often in normal service. 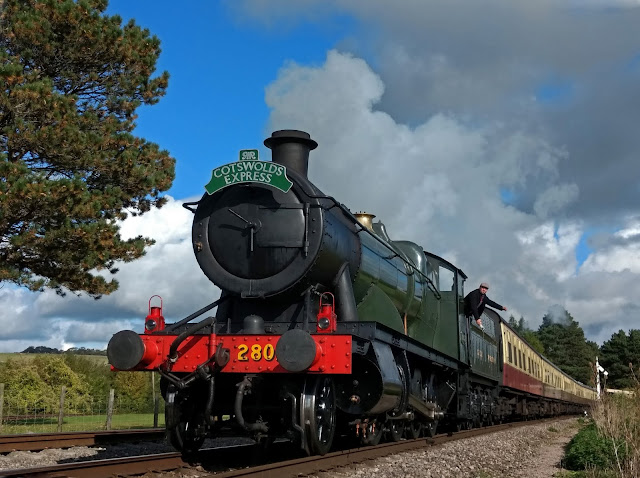 Pannier 9466 and Hall 7903 were waiting for the down train, here headed by our veteran 2807. This time the gang took shelter on the correct side of the track - for the camera, in any case. 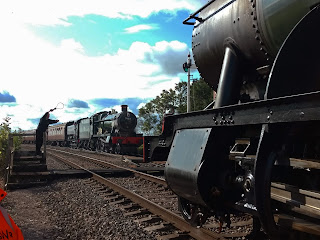 Now you can see why the fireman of 2807 was hanging out of the cab - the signalman at Gotherington was waiting on his little platform to make the token exchange. 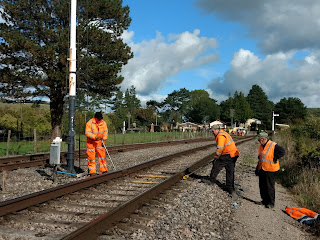 While half of the gang measured up the northern turnout, 4 of us addressed a dropped joint pretty much outside the signal box, right under the bobby's eye. 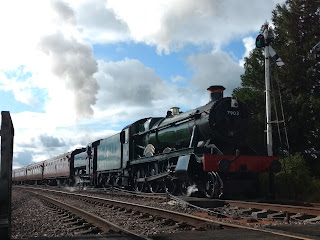 With the down train gone, and its token available for heading north, the double header set off for Winchcombe in front of us. 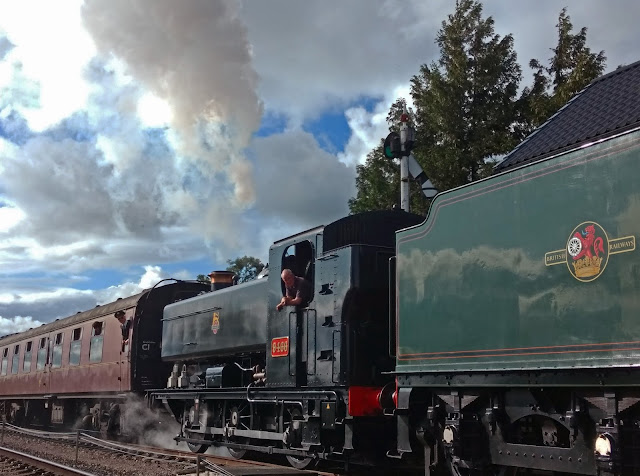 This is the best shot of the Pannier we got today. There must have been an occasion when, heading south, it was at the head of the train, but we didn't see it. At lunch, or in transit, whatever. So content yourself with this. We'll be seeing a lot more of 9466 over the next couple of years. 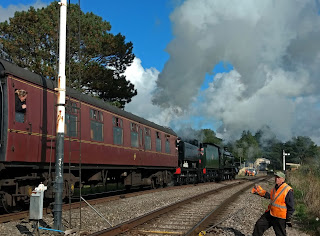 7903 and the new Pannier pulled away and through the station, while Dave seems to take a sunbath by the lineside.

As you might have guessed, we're more professional than that, he was guiding Pete in the foreground on the bottle jack to get the lift right for packing the joint. 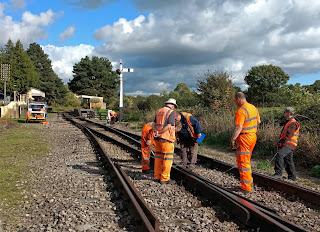 Job by the box done, the 4 of us joined the other gang measuring. This was the second turnout of the day, the third would be further south, at the other end of Gotherington loop.

Before moving to the other end of the loop, via Manor Lane, we let the next service train past. 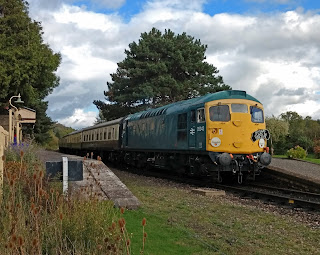 This was the class 26, the slowly thumping Sulzer.

We then measured up the southern turnout of Gotherington loop, and that was it for the day. Now there is just CRC to do, one last day's work.

November is a non running month, and work is scheduled on Stanway viaduct involving the removal of several panels of rail. We might be asked to assist with that.