All day, and all of the night.

But first, a few words about work at Broadway on Friday. 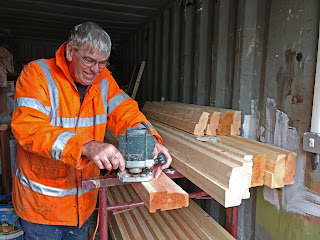 There was certainly rain at Broadway on Friday, but nothing like what was to come on Saturday.

John and yours truly continued with painting up in the air, on the centre span roof. It's breezy up there, with sleepy cluster flies. 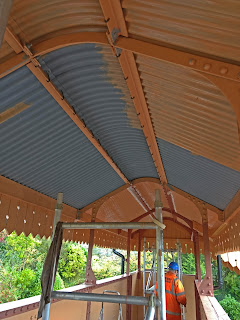 We can work in the rain, if there isn't too much wind, as water does enter the footbridge as soon as there is a breeze. On Wednesday John arrived to paint, but could not as there was condensation on the underside of the steel sheets.

Remember, Wednesday was the day with all the mist. It condensed on the slightly colder corrugated iron.

On Friday it was dry underneath - less so outside - and next to John's dark stone on the ironwork, the sheets in the centre got their first layer of light stone undercoat. The two ends (5 out of 7 sections) are now done. 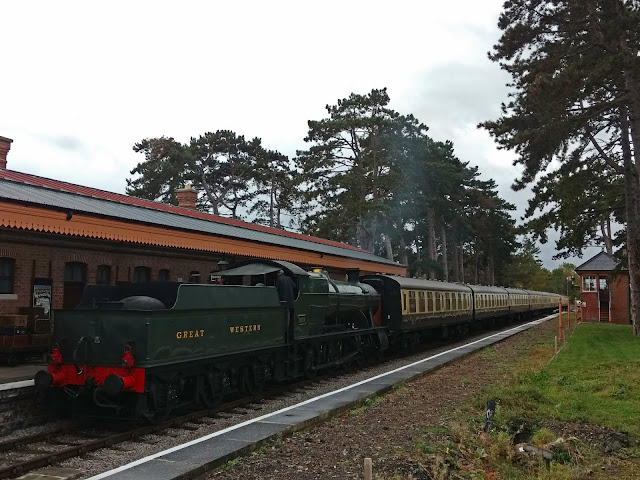 Friday saw a fire and drive train arrive, a silver experience and hence the only one of the day. There were 2 last minute vacancies, so you could always add your name to a standby list and maybe get a bargain?

Or maybe it was the weather.... note that the cab roof sheet is deployed, it must have been grim reversing up to Broadway, over the long embankment. Not that you'd notice, it's quite thrilling driving a steam locomotive, rain or shine. 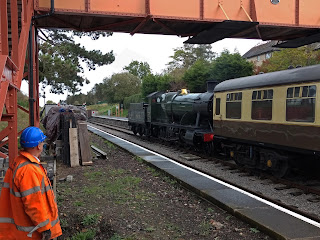 Helpfully, there is always a whistle somewhere near the Caravan Club, and when we hear that we drop the paintbrushes and have a look.

These are the last days of 2807 before overhaul, so do come and have a look at her.

This was the big day of rain, which started the previous evening with strong winds to boot, and which carried on all day Saturday.

We were due to go out recording the turnouts at Cheltenham, and also repair a defect at MP 16 1/2, but the heavy and persistent rain drove us all indoors, with the exception of gallant track walker Dave. 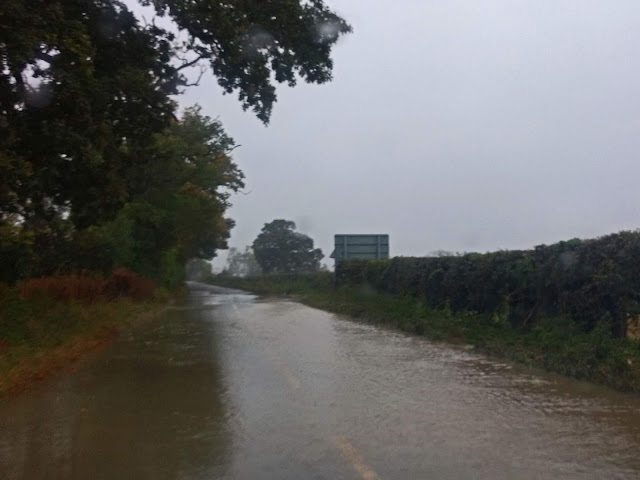 This was the view of the B4632, within minutes of setting off for work.

As the rain continued non-stop all day, we decided to return later via the heights of the Cotswolds edge, rather than drive through this ever deepening lake.

Due to the weather, work on the track was cancelled for today. Instead, we spent the morning 'usefully' chatting over several mugs of tea. A face to face meeting is always better than an email. 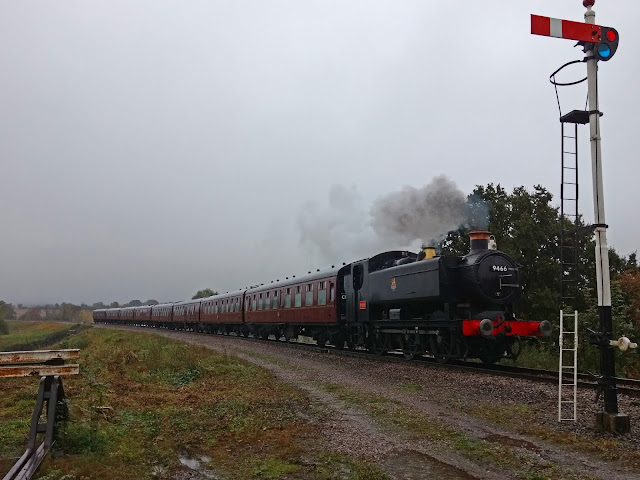 Our new visitor 9466 was out today, believed to be its first day of revenue earning service.

Here it is just coming off Chicken Curve. 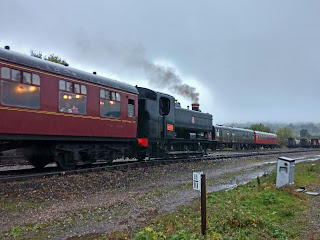 9466 entered Winchcombe yard in decidedly damp conditions, with passengers huddled in their seats and looking out at mad people standing in the rain, from behind misted up windows.

It wasn't so bad, folks, we've got wet weather gear, you know! 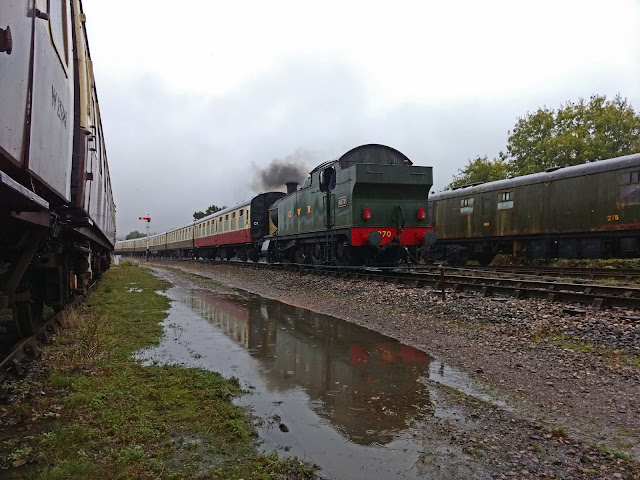 It was a sort of 'tank engine day' today, but without the eponymous character. 4270 was the other contender, here seen passing a large puddle at Winchcombe. A final player was the DMU, not a tank engine, but hey-ho.

One more week and a weekend to go, then it's a month of peace and quiet for repairs here and there, before the busy month of ho-ho-ho.
Posted by Jo at 16:41