Saturday along the line

What a splendid day to go out along the line and record our track. The sun shone brightly, and there was almost no wind. Balmy days indeed.

Eight of us met at Winchcombe, had tea (but no doughnuts, due to a delivery problem) and then headed for Toddington south. 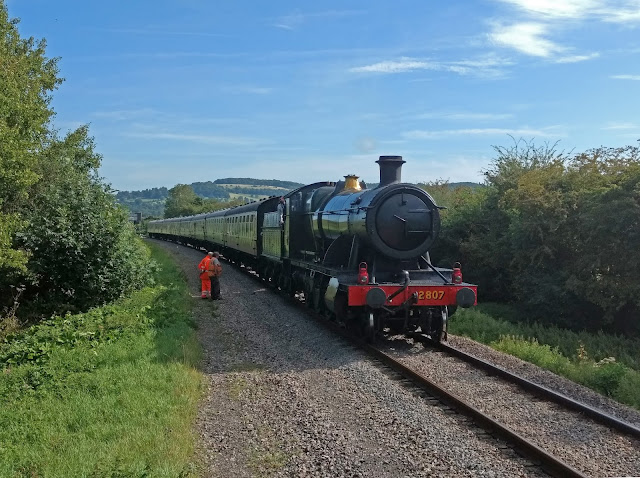 On our way north to Toddington we crossed the first train south, here splendidly headed by that grand old lady, 2807, in her last year before overhaul.

We resumed last week's track recording at the Toddington southern turnout, and worked our way further south towards Didbrook and Hayles.

We parked the Landie at Didbrook 1 and walked north, returning slowly with our tape measures, track gauge et al until we met again to recover drinks, which were much needed in today's heat. 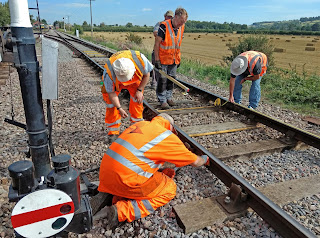 This was our starting point at the south end of Toddington. As Alan measures the length of the rail with Jim off camera, Bert Ferrule paints the number of the rail into the web, so that Nigel can record everything on the spread sheet. 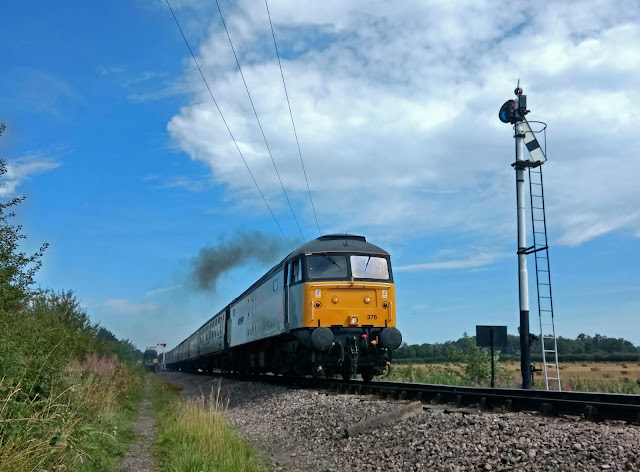 We worked quickly and efficiently all day, pausing only twice an hour to let the three trains through. 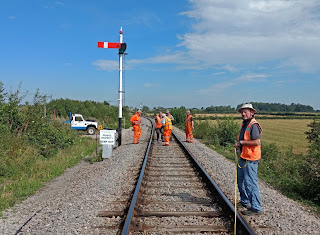 Here we are at our first refreshment stop, near the Didbrook 1 bridge. It offered no shade, but Didbrook 2 looked promising in the distance. It was in 1981 in the very early days of track laying that John Lees opined the famously gloomy words: 'We'll never get past Didbrook 1!'

Well here we are, having laid track all the way to Cheltenham and then to Broadway, measuring track at the same Didbrook 1 bridge as if it was the most normal thing in the world. We've come a long way. 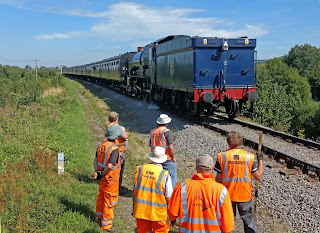 A bit further along, and we were interupted by King Edward II, running tender first and in his last week on our railway. If you want to see this large GWR locomotive, get your skates on, as we will have to give it back soon. 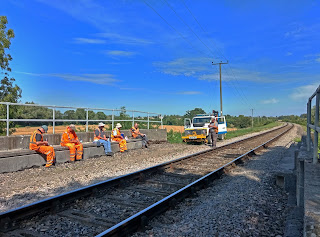 Lunch was taken at Didbrook 2 bridge, one of the few modernised concrete ones that we have. 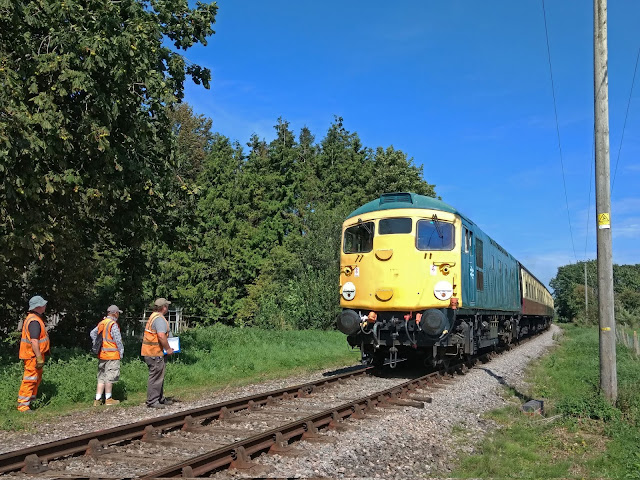 After lunch we carried on, stepping aside here for the class 26 as it was approaching Hayles Abbey halt. 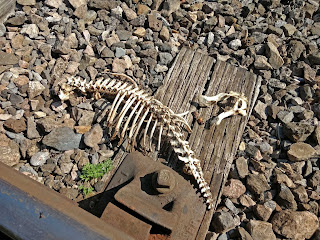 It was so hot in the afternoon, it felt as if we were working in the desert.

We're guessing a fox here, unless someone knows better? 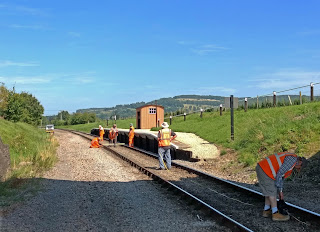 As we reached Hayles Abbey halt we passed the half mile post of our work today. That seems to be what is more or less achievable in a working day.

Actually, we ploughed on a bit further, until we got to a change from Bullhead to FB rail, which we felt was a got place to stop. It can easily be found again next time. 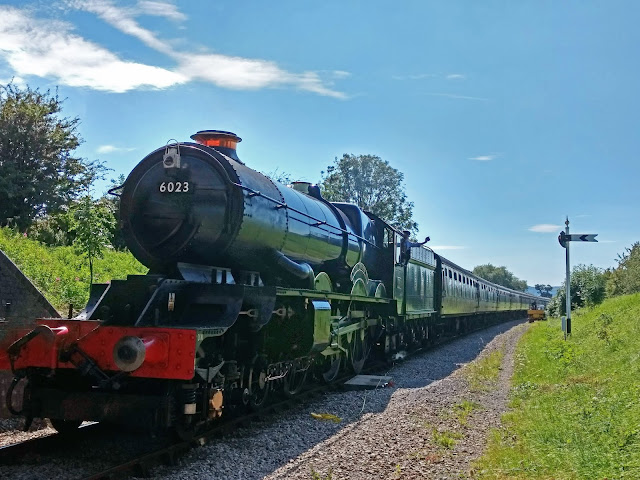 The King graced us with its presence one more time, and we got a friendly wave from the fireman too.

Rather than take another picture of 2807 passing through, we recorded a video. You can hear the locomotive blowing off as it rounds the corner, and then it chugs away merrily down the Defford straight and on towards Winchcombe:

We're still posting 'early GWSR' pictures taken by John Lees, mostly of his participation in the reconstruction of our railway since 1981. These pictures are in the form of slides, and each one has to be scanned, then cleaned and adjusted with Photoshop (colours fade or change, bugs get crushed, scratches and dots proliferate after all these years). It's a long and tedious job. So far we have reached picture 1084, and the whole album posted so far has had 9394 views.

And yet there is another box of slides to scan, and possibly another after that. It's probably unique in our history, but how do we preserve it? None of us are immortal. For the time being all this history is up on Flickr, but that is now no longer free after a change of ownership, and there is now a £40 annual cost to keeping it going.

We really need some sort of archive on our railway, perhaps combined with a museum. As people get older and generations move on, things get lost or are forgotten. It's only by pure chance that we stumbled across someone who actually remembers the inside of one of our stations as they were. Toddington is much changed inside, and so is Gotherington, the only two surviving original stations of the Honeybourne line.

Posting the most recent scans of John Lees' slides we saw that he had recorded clearance work at Broadway in 2007, the very earliest steps towards the rebuild of the station that opened in 2018 but that is still being rebuilt today.

Due to domestic commitments there won't be a canopy gang report for Friday or Monday, so this is a good opportunity to show what John saw in 2007.

To put his clearance pictures into perspective, we're kicking off with a picture taken by former Broadway resident Brian Parsons:
Brian cycled down from upper Broadway to the station site on 23rd May 1964, just 6 months after the station was demolished. He found GWR Pannier tank 3775 galloping through the station site with a down freight. The little tank engine was built in 1938 and was based at Gloucester.

To the left of the smokebox is a pile of rubble and a hollow, all covered in grass. This is where the P2 waiting room used to stand. You'd never know that a station used to be here, that gave up to 10 people employment and housing. A couple of loose bricks in the foreground betray that something used to stand there - the station building. 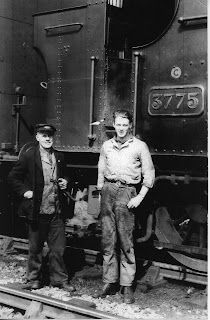 Now it's a small world in the Vale of Evesham...

We just mentioned that only one person can remember the inside of our stations - Helen Carver, who was the daughter of the Winchcombe stationmaster.

She mentioned that her brother Douglas started his railway career as a fireman (finishing as a diesel driver at Warrington) and she gave us a little cameo of him standing next to his engine at Evesham.

Was he perhaps the fireman on that day in May 1964? 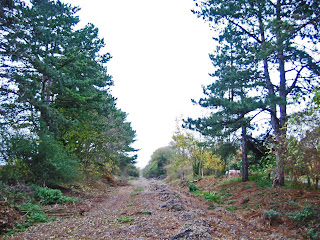 Next, we move forwards to 2004, and the same area at Broadway looked a lot more overgrown. The trees are much higher, 40 years later. (the station building used to stand on the right, while No. 3775 was photographed a little further back on the left). 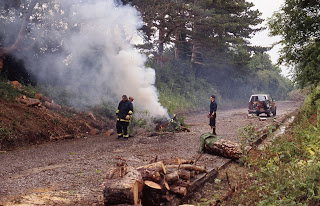 And now we wind the clock forwards another 3 years to 2007, when the John Lees photographed the first clearance undertaken there, in preparation to the start of works in 2009.

The smoke obscures the site of the P2 waiting room, but the bent tree on the left can also be seen in the 1964 picture. 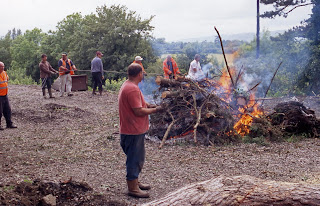 Clearing the undergrowth and dead trees was quite hard work. Here is the PWay gang, also Mark from the loco dept (foreground) heaving away like billy-oh at something heavy down the embankment by the bridge.

All this went on a nice fire they had for themselves in the middle of the trackbed. 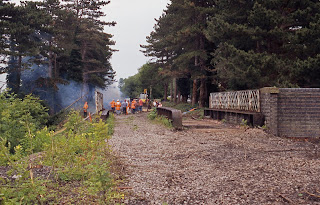 The gang can be seen here from across the station road bridge, half of which was cleared of ballast at the time to reveal some sort of clay tile surface. 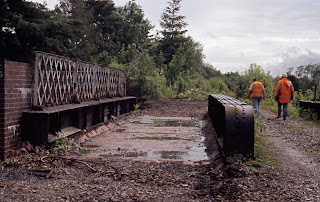 A close up of the cleared section of the bridge on the down side, looking south. 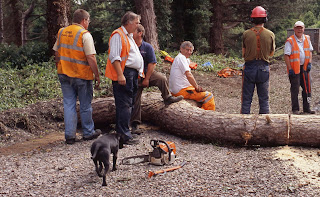 All this was very tiring, so a cut down tree makes a useful bench seat for a while.
From L to R: Paul, Bernard, Stevie, Glyn, (?) and John. 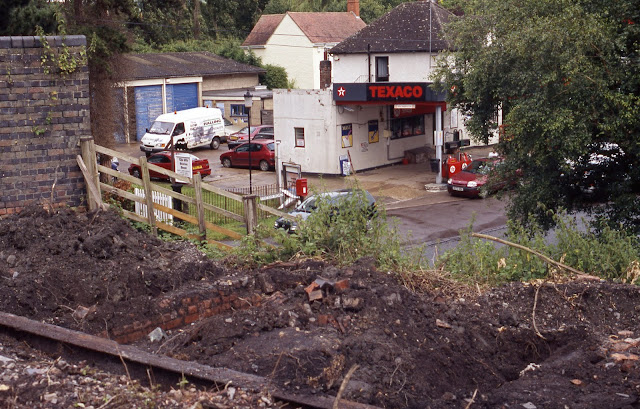 An interesting shot was taken here from the site of the old Broadway signal box. You can see its steel foundation ring, on top of deep brick pillars. The petrol station in 2007 sold Texaco petrol (today that is now Harvest) and 12 years ago the original cast iron gate posts, and new gates made by C&W, were still in situ at the bottom of the station approach. They were pulled out during the station rebuild and not re-used at Broadway, a sad loss of originality.


44 years earlier Tom Toohig took this picture, on which we can also see the petrol station. 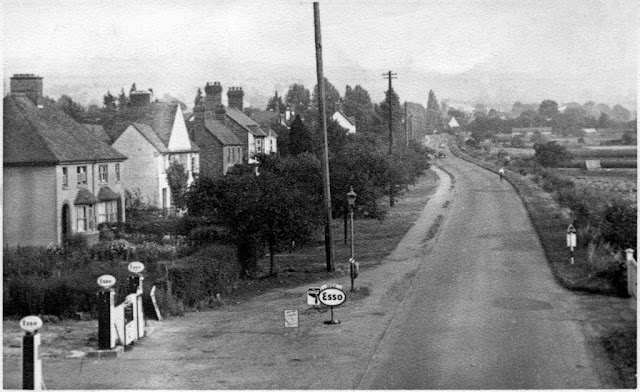 This was the view from the station road bridge in 1963. The petrol sold then was Esso.
The road, and remember that this was the major artery A44 which ran right through the middle of Broadway until the bypass was built, looks so tranquil.

An original gate post can also be seen on the RH side of the road. This is gone too, now replaced by the entrance to the Caravan Club.

It's amusing to see how close the furthest petrol pump was to the hedge, and how, once you had filled up, you had to dodge some advertising signs and bump over the grass between a telegraph pole and a lamp post to get back on to the road. Hey-ho, and who complained? 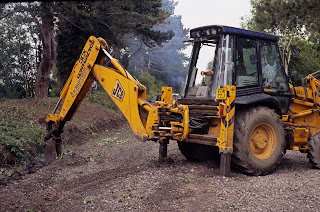 Here's Stevie in his trusty JCB having a root around the P2 foundations. Although BR demolished them down to the ground (you can still see a lump of blues as you come up the station approach footpath) there were still one or two rows below the original ballast level.

Later we would grub out the lot, and replace with new, deeper concrete foundations. It's made up ground here, so better to build something solid. 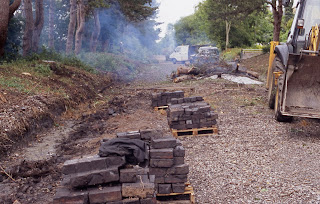 After Stevie had pulled out what he could, the goodies - piles of chunky imperial engineering blues - were put on pallets for cleaning later.

Finally they were used again too, on the P1 side where we started. 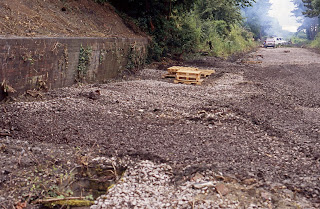 The last picture is particularly interesting. We're further north here, looking back at the station site. In the foreground is a catch pit which marks the edge of the down line. The gap behind it and up to the wall, is where the horse dock was. This was flat on top; in the picture you can see earth piled up on top of it, right up to the edge. Before we bought our 15 mile section of the line BR sold off the horse dock approach to the owners of the station house, and they used it to widen their garden, and build a garage and new drive (which is today's main entrance to the B&B)

Today the north end of P1 runs up to the catch pit in the foreground, occupying the few yards of horse dock you can see in this picture.