The Wartime organisers came early, to pick up the heavy sandbags, camouflage netting and signage. All was heaved on board the Transit. They also took away two unexploded bombs with them, which was very kind. 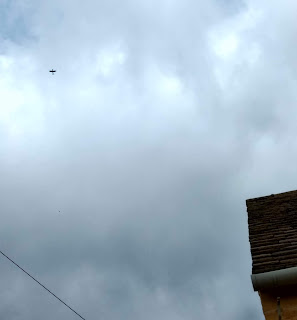 The Saturday had cold and windy weather, but it's an ill wind that blows nobody any good. The Broadway cafe had record takings, and a queue formed outside on the platform. Sunday the weather was much kinder, with larger numbers attending.

On Sunday a Spitfire was promised, and here it is, flying over your blogger's house. Surely you recognised it easily? That little cross in the sky?  Well, you wouldn't mistake the sound of the Rolls Royce aero engine though.


Monday at Broadway was dedicated to making and fitting dagger boards. 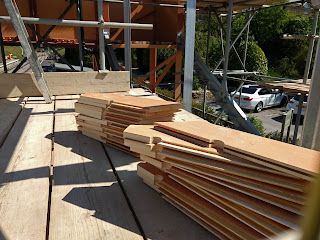 Piles of them were being churned out by John in the container at the end of the platform. Each one is special, it's not like making model T Fords. They are all numbered, cut to length, the top at an angle, the bottom point at two angles, and the holes staggered just so. 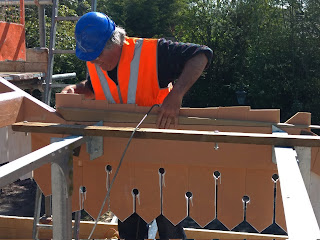 In between fiddling the dagger boards - some had to be sent back for alteration - Neal also made this long infill piece, which will give the roof of the intermediate landing a slight slope towards the building.

The tops of the dagger boards already fitted behind it will be cut off to suit. 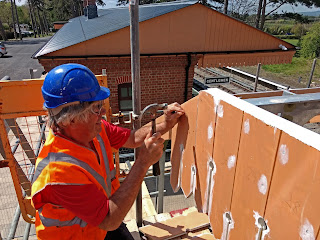 Here is Neal nailing on a few more. Initially the nails are not driven home but left proud, so that if the case presents itself they can be removed again. That came up on the other side, so it's not just a precaution. 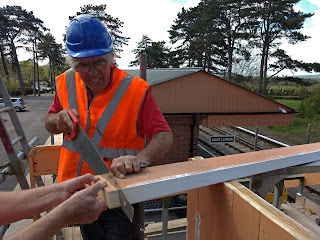 Then Neal decided to fit a second cross member, again in the vicinity of the intermediate landing. This was cut from the long pieces of timber primered and undercoated last week.

On site the roughly cut length is cut to the exact size required, before it is fitted. 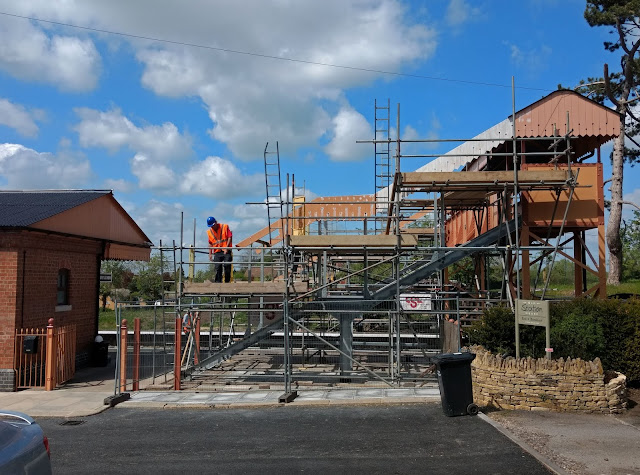 Here's an overview taken mid-morning. The dagger boards on the Cotswolds side are almost down to the bottom. 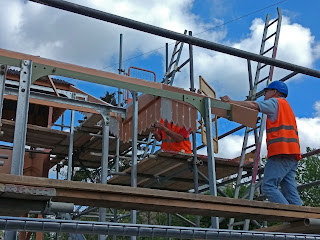 Neal then fitted the last few on the Cotswolds side, before declaring that he would stop at that point, as it wasn't absolutely clear how they would run into the canopy overhang. It is likely that they will curve downwards, lengthening as they do. We shall see. 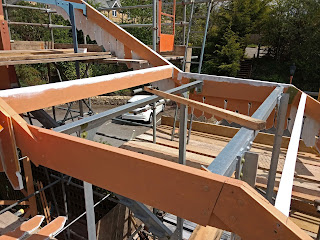 With the two cross members in place we are in theory ready to accept that length of corrugated iron, bent at both ends, but in opposite directions. It would rest on the white area of the cross members in the picture.

We've had a couple of potential addresses to do this given to us, but so far no luck. 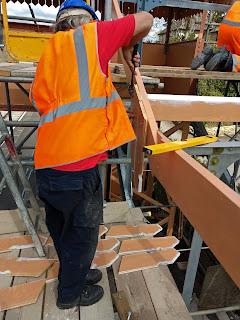 After lunch, and given that we have gone far enough with the dagger boards on the Cotswolds side of P1, Neal decided to start on the Malvern side of the P1 steps. Here he is just starting, and this is the place where he had to take off the first ones and try again, to get the starting point and its height just right.

Numbered dagger boards for this side lie about his feet. 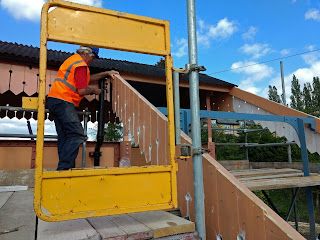 Near the end of the day Neal had risen to the top here.

With many dagger boards now in place, the steps are starting to look a bit more substantial now. 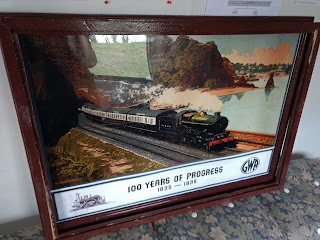 The Broadway gang are making frames for 4 reproduction posters, which will go in the cafe.
This one looks a bit odd, it's because there's one frame on top of another. Worry not. 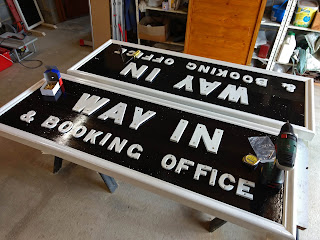 In a small workshop nearby, these two V boards were close to completion. In the picture the cast letters are being screwed on, so some are straight, and some are only roughly laid out.

A wrinkle we are copying from originals is to put the letters on washers. This raises them just off the background, making them more prominent, and also easier to (re-) paint without touching the background.

The letters are cast replicas, and the moulding is specially made using an original as a sample.


The V boards will go under the small canopy over the front door.

We had an internet outage (rural Broadband, eh?) over the last 48 hours, so two blog posts are going up at the same time.

The other can be read here:

https://haylesabbeyhalt.blogspot.com/2019/05/slowly-goods-platform-rises.html
Posted by Jo at 20:32